Bus from Wellingborough to Bedford

We’ll no longer be stopping at Bedford station during morning and evening peak times.

Instead, you will need to use our bus service, which will offer air conditioning, free Wi-Fi and town centre stops. It will depart from the roundabout, just next to Wellingborough station car park.

East Midlands Trains season ticket holders travelling to Bedford via the bus service will be offered a discount of up to 50% and there will be up to a 25% reduction on anytime fares for travel on the bus. If you’ve already bought a season ticket for travel to Bedford, please contact CSC.manager@eastmidlandstrains.co.uk to arrange your partial refund.

Your discount will automatically be applied to tickets bought after 20th May 2018.

Over £7 billion is being invested to transform north-south travel through London with the Thameslink programme. This will deliver new and more reliable trains with more services at peak times and improved connections on Thameslink services from Bedford to Farringdon, for Crossrail when it opens, as well as to London Bridge and further south. The Thameslink programme will run alongside the biggest upgrade of the Midland Main Line since it was completed in 1870. A brand new Thameslink timetable will be introduced from May 2018, representing one of the biggest timetable recasts in recent railway history.

In order for the new Thameslink timetable to work effectively, East Midlands Trains services have to be changed.

At least one correspondent to the prestigious Modern Railways magazine says almost all the fault is with East Midlands Trains. EMT's new timetable has some strange changes.

Instead of a near clockface service, Wellingborough retains two trains an hour but 8 minutes and 52 minutes apart TO London and 42 and 18 FROM London. According the the MR correspondent this has nothing to do with Thameslink.

But it is the coach link between Wellingborough and Bedford that takes the biscuit. Here is a chunk of the EMT timetable for the morning peak. In practice this means that a journey from the north gets a whopping 50 minutes to one hour time penalty between Wellingborough and Bedford. The train would normally take just 12 minutes.

This is a really bad piece of PR and a sad and negative attitude to customer service. It is possible that peak hour paths through Bedford may be difficult, but Thameslink has been in the gestation period since the early 1980s - so why has the infrastructure needed to deal with this problem not been built?

It is a disgrace.

On Monday our Northampton correspondent Alan sampled the coach service, reporting with an email on Tuesday.

Yesterday the evening timetable was not quite working perfectly. The 1628 journey left Bedford at 1650 . At Wellingborough the 1658 from Bedford journey joined  it. 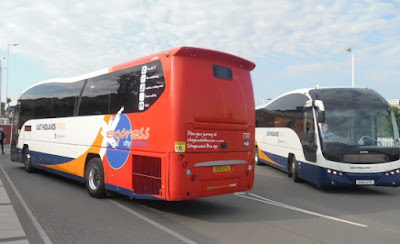 Loadings were "light". Alan explains further in his own imitable style:-

It is a registered bus service (route W7) and buses also call at Commercial Way in Wellingborough and Bedford Bus Station.  Although operated by Stagecoach Midlands the timetable is not currently on the Stagecoach website, nor Traveline nor Northamptonshire County Council's.

It is, however, on the EMT website if you are resolute enough to find it. 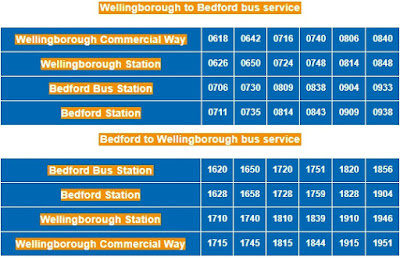 The route is Bedford - A428 - Turvey - Lavndon - Warrington roundabout - A509 - Irchester - Wellingborough. (click on the map below for enlargement) 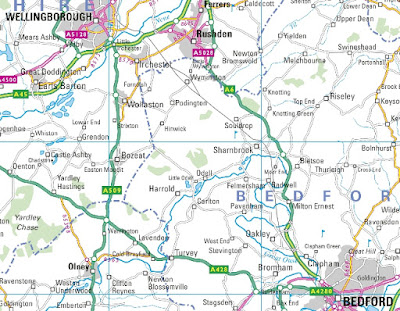 The coaches are lettered for East Midlands Trains ... 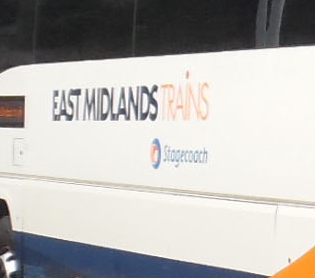 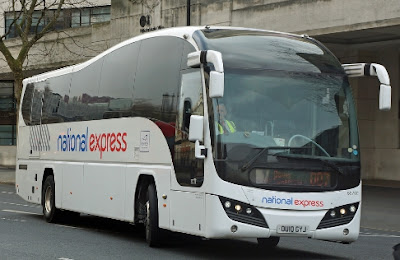 After a spell with Stagecoach Kent, also for National Express, the coach moved to Fife. 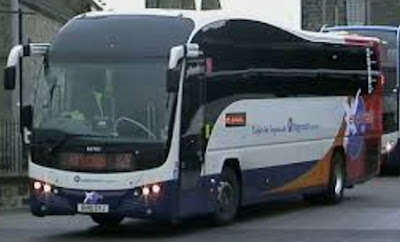 The "Explore The Kingdom" (of Fife, not GB!) lettering has been removed but the Fife brand ... 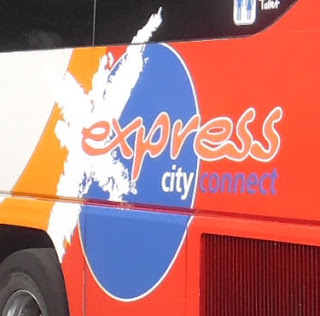 ... remains. Neither Wellingborough nor Bedford is a City - yet!

The only positive that might be gained from this appalling piece of mis-management is that at least the organisation of this replacement service "on the ground" was well done. 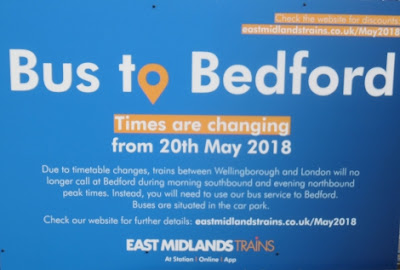 And talking of incorrect labelling. Alan also spotted some of these ... 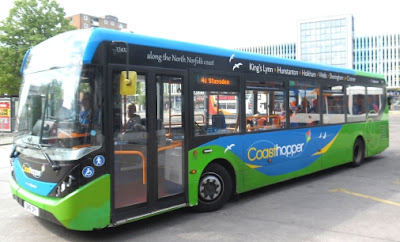 ... to far away places with strange sounding names.

Actually the bus, drafted in as a result of the Kings Lynn capitulation was going to Stagsden. 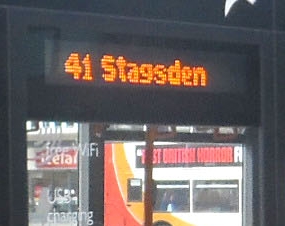 ... just west of the City of Bedford! 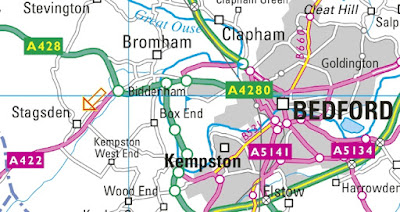 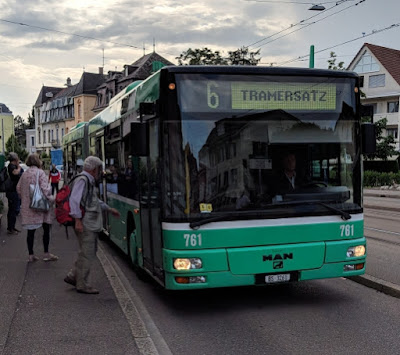 The folk at BVB were much better at coping than South Yorkshire PTE who were unable to inform the passengers about the "Redgates" diversion on Sunday last because "nobody has access to a printer on Sundays"!

The problem in Basel was later cleared, but replacement buses (Ersatz Trams!!) were quickly provided to ensure that No 3 son could get to work. A few others used the replacements as well!