fbb is well aware that most of his readers are knowledgeable and will be cognisant of the difference between fact and press release. So a little game of "contrast and compare" may be of interest. Sheffield Bus Partnership ...

... has, for five years been "improving bus services in Sheffield", mainly by reducing frequencies and re-organising services to confuse the travelling public. Over the five years' life of the partnership it has become increasingly difficult to obtain printed timetable material while the quality and timeliness of on-line information has steadily declined.

It appears to have come as a huge surprise to the partnership that these policies have caused passenger numbers in the city to drop faster than the national average. The use of Senior bus passes has dropped dramatically since the PTE insisted that they could only be renewed on-line. Another eye-widening surprise.

Suddenly, finding out what the partnership stands for has become difficult. For example, click on the link at the bottom of the PTE's "bit" about the "partnership" ... 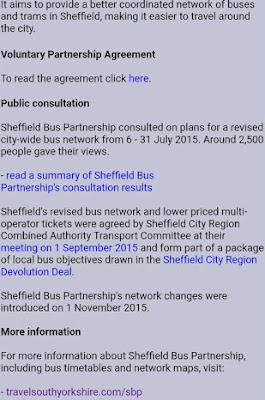 ... (www.travelsouthyorkshire.com/sbp) and see what you get. Or you could follow a link on the First Bus web site ... 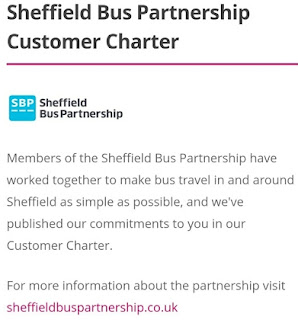 ... (www.sheffieldbuspartnership.co.uk) and, lo and behold, you will find ...

... nary a squeak about the "partnership". You will, however, be introduced to the new super-smashing exciting logo below. 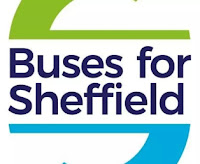 ... which announces that it will deliver "improvements" to Sheffield's bus system.

Only Stagecoach's web site now admits to the existence of the Sheffield Bus Partnership ... 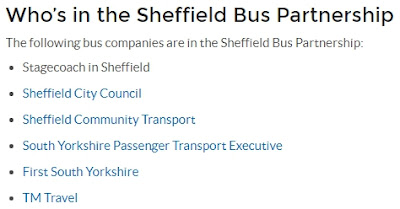 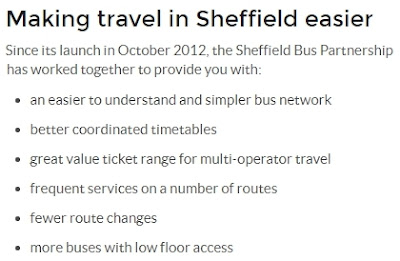 So there have been substantial improvements? Really?

It would appear that this "partnership" has been a fantastic success.

The best way to understand is to read an article in the local press - a regurgitation of the mega press release.

Now remember; the challenge is to "spot the difference" between (a) the "partnership" and Buses for Sheffield" and (b) between both of these "brands" and reality.

fbb has highlighted some phrases worthy of interest.

Bus operators in Sheffield have unveiled plans to reverse a recent decline in passenger numbers by making it easier to get around the city. A new London Tube-style map plotting high-frequency routes around Sheffield and the connections between different services is at the heart of efforts to simplify bus travel. The new Tube-style maps will be displayed at all bus stops.

fbb bets any amount of nothing that this new map WON'T be displayed at ALL bus stops! 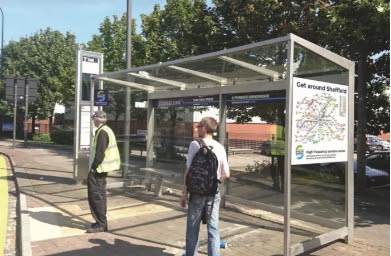 When Harry Beck designed the iconic tube map. he realised that, as most of the journeys were underground, geographical realism was not necessary. Above ground a network like Sheffield's is far more complicated and the mangling of the truth is both off-putting and unnecessary. It has, as we saw yesterday, been seen before. Why not simply publish a version of the excellent geographical map? 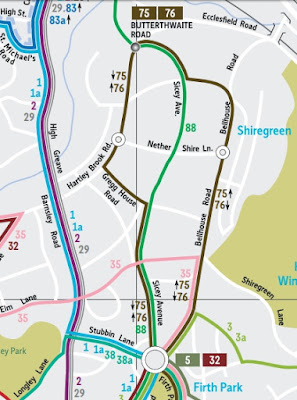 Timetables will also be coordinated to include all services, regardless of which company operates them. And providers will work more closely when planning to alter routes or timings, to ensure there are fewer, more coordinated service changes in future.

Erm? Hasn't this been happening since the "partnership" created its new (un)improved network? Services 1/1A, 7/8, 24/25, 52/52A, 83/83A and both 120s have been advertised by the PTE as joint services. Stagecoach are wont to provide a link to the PTE timetables whilst First (partnership rules OK?) only promote their own times.

The PTE presentation is pretty crummy ... 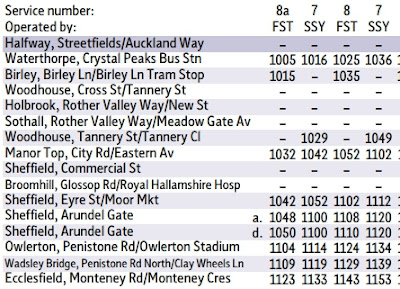 ... but both operators' services are combined.

These measures are part of a major re-branding operation to unify services within the city under the name 'Buses for Sheffield'. The new name and logo will soon be displayed on all buses and bus stops in the city, to help people more easily identify which services they can use with a combined ticket and to provide a single point of contact to report issues ranging from cleanliness to punctuality.

To help us all understand that we can use our City Bus ticket on all city buses (there is a tiny little clue in the name) the companies will be adding stickers to their vehicles. 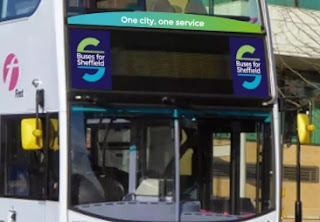 Illustrations show a First Bus (above) and a Stagecoach bus (below). 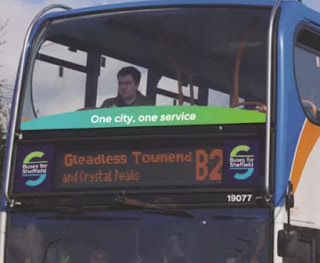 The B2, by the way, was a replacement service for the tram when track was being renewed on the route via Norfolk Park.

Why not call the new scheme City Bus?

The boss of Stagecoach Yorkshire explains the thinking behind the "revolution" (?). 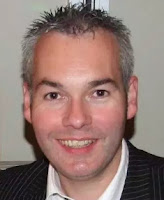 Matt Davies, Stagecoach Yorkshire's chief executive, said: "Having a common identity and making the network easier for people to understand is key to growing bus patronage. The city has a very good bus network but the perception will be that some are First, some are Stagecoach and others are TM Travel".

Yes, Matt - that's because they are!

"If people get used to seeing the network map it raises awareness that the city's very well covered between the different operators."

Canny Sheffielders will not be conned by a few coloured stickers on the buses. To change perceptions needs a root and branch re-think of the whole publicity and management machine. Telling the customers when and where the buses run might help.

But fbb has an even better idea. Paint the buses cream with three blue stripes ... 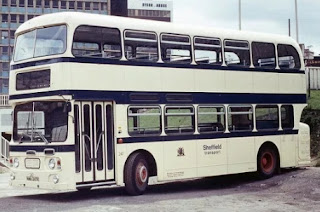 ... and call it Sheffield Transport. Then you could "co-ordinate" all the services in one Timetable "book" and only change timetables a couple of times a year. 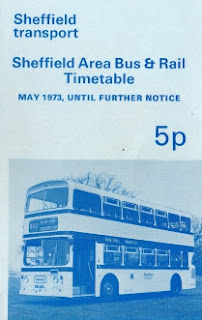 fbb does wonder why no-one has ever thought of that method of integrating the services into a common network. It might actually work.

Tomorrow, we will examine what is on offer in detail from the pre-launch "Buses for Sheffield". We are asked to look forward to a new website - so everything we be all right! 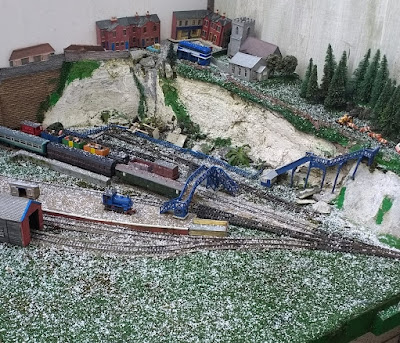