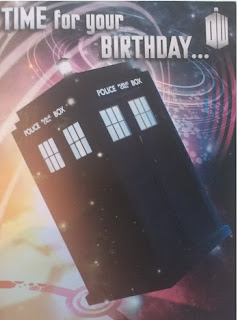 Back to Fakenham
Correspondent Keith, as well as being bemused by bus information in Brum (earlier blog), lives in Fakenham and is most dis-chuffed by First Bus' timetable for their "exciting" new X29, replacing the Stagecoach (erstwhile Norfolk Green) route.

Here is Keith's missive to First Bus with additional comment by fbb.

I refer to your new X29 timetable and would make the following comments:

1) Why is Foulsham not served? This is a very popular stop on the current Stagecoach timetable. There will be an absolute outcry from the village.

fbb did not spot that. First is ignoring Foulsham, 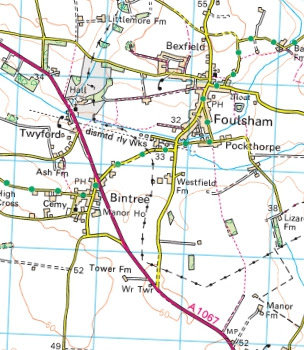 The (current) Stagecoach version diverts to serve this village ... 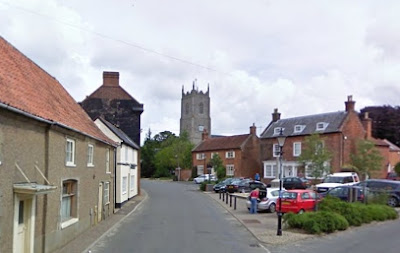 ... only it doesn't. It only gets as far the very edge of picturesque Foulsham, here at a non-existent stop called Gunn Street. 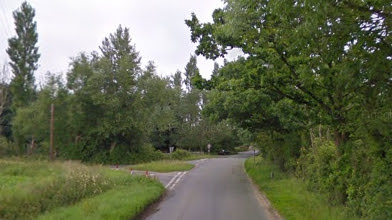 Before reaching Gunn Street itself (next RIGHT), it turns left to get back to the main road as Bintree - see map above.

So perhaps not so big a disaster as Keith suggests? Or have First just looked at a map and ignored potential customers? But the timetable is (deliberately?) misleading.; maybe Gunn Street for Foulsham? 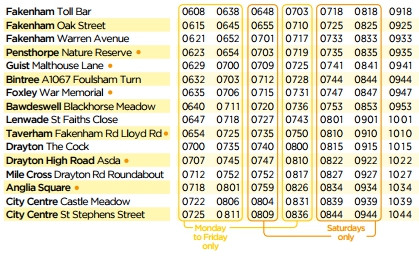 Keith refers to the stop in the centre of town, not "Toll Bar" which is on the road northwest-bound near the by-pass roundabout. 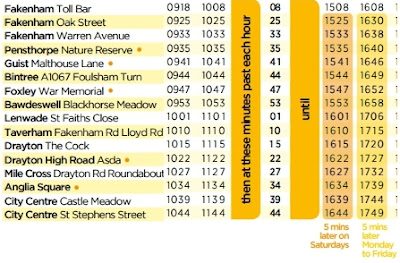 ... which means passengers from the end of the route have an extra ten minutes to enjoy (?) the town centre stop. 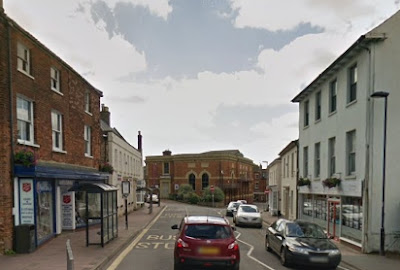 3) Why is the 0925 from Fakenham Oak Street timed 5 minutes before concessionary passes are available? This will annoy most of your customers meaning that a day trip to Norwich will have to be on the 1025 arriving just before noon! You cannot appreciate the anger that this will cause. Why not drop the bus back 5 minutes to 0930 and run it off frequency 5 minutes later recovering its time back in Fakenham at 1225.

First Bus will probably argue that X29s have to be part of the 15 minute frequency on the "Yellow" route to Taverham. Of course the company could charge from Oak Street to Warren Avenue (due away 0933) then provide free travel? Or would Norfolk Council be prepared at accept an exception; it does happen elsewhere in similar circumstances.

4) The last bus back from Norwich is too early at 1805. Just look at the existing loadings on the present Stagecoach 1855. 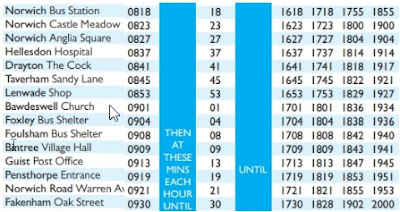 Norwich is not a small town that shuts down at 1730, many shop workers work much later. Please reconsider this.

5) The first arrival into Fakenham is at 1008 despite buses arriving empty from Norwich. 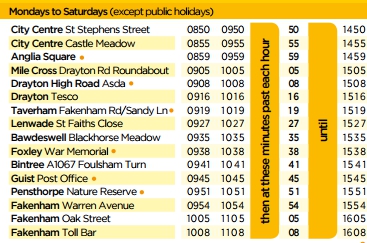 Keith has a point there. Buses run "light" to Fakenham to leave at ...

... but NONE of these conveys passengers from Norwich. That would seem to be a very poor aspect of the new X29.

6) City College is not served for the students.

Quite so. Stagecoach diverts a journey from the bus station to serve the college instead. 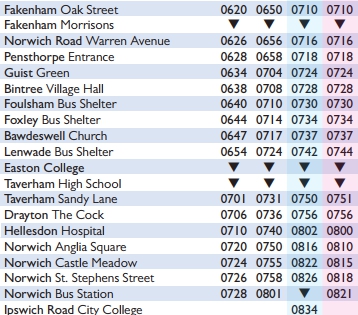 OK, it is only three stops away and these student types can always walk; but is it sending out the right messages about "service"?

7) The timetable is very operational and not customer focused. It is driven from the City end and Fakenham looks like an 'add-on' or 'after thought'.

Keith's number 7 is the core of the problem. Service X29 has been created to offer as low a risk as possible to First Bus. Compared with Stagecoach, the First Bus is saving money by making it part of the Yellow Line 28/29; it is saving money by not running a full service when buses can be used more profitably elsewhere (i.e. between 0710 and 0925 from Oak Street) and it is saving drivers' wages by running four buses out to Fakenham without allowing passengers to join them.

It is a timetable for the convenience of the bus operator and, in many aspects, not ideally suited to those awkward beasts, the passengers.

Question? Will these "operational" savings encourage passengers? Or will usage decline, post Stagecoach, to the point at which First drops their route to Fakenham as they have done once before?

Please consider all of the above points as there is still time to change. Otherwise you will be receiving a lot of grief from customers.

fbb will be interested to hear from Keith about the company's response - if any.

And an fbb moan. How does a visitor know which "Fakenham" stop is at the town centre? A sensible convention in these circumstance is to list stops as ...

... which gives the uneasy passenger  bit of a clue.