and a break (sort of) from the saga of the Sheffield sojourn.
What, asks fbb in ancient and reminiscing mode, was "Videmat Self Service"? 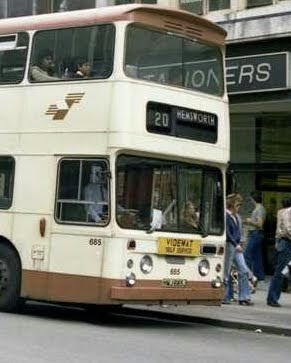 Inside the bus was one of these unimposing boxes. In a scheme to reduce boarding times on one man operated busy routes, Sheffield and Manchester (and Leicester?) all used the system. In simple terms, if you had the correct fare, there was no need to queue to wait to be served by the driver - you just dropped the coins in the red hopper on the machine ... 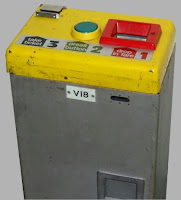 ... pressed the green button and your ticket was delivered. On it were printed images of your deposited coins. No, they weren't photocopied! The coins were used, effectively, as a stamp to impress the image on to the ticket via a carbon ribbon. Which is why the images were "backwards". 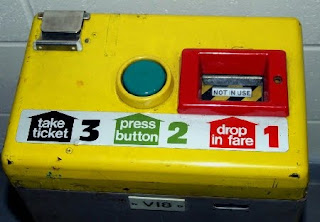 They were great fun and the aim was to keep all your half penny coins (decimal "tiddlers" you will remember) to get the longest ribbon of ticket possible. In the People's Republic of South Yorkshire, the dearest "Videmattable" fare, back in the halcyon days of the mid 1970s, was 14p - which meant a lengthy ticket of 28 impressed coins.

The systen didn't last, sadly. The machines we cumbersome; they often jammed and, of course they relied entirely on the honesty of the fare paying passenger. Metal washers worked well, as did all foreign coins; and plastic tokens would print quite nicely when mixed in the metal specie.
Pontefract Cakes were less successful and easily glued up the works, as did small square chunks of metal. Polos and Refreshers were crushed by the mechanism and made all the other coins very sticky to count.
But the system could only be "policed" with roving inspectors and, as the only record was a print of the coins, they offered no means of statistical analysis now deemed essential in a world which sees technology as the (often pointless) answer to all questions, even questions that no-one ever wanted to ask!
Oh, and they didn't speed up loading at all because they were slower than a man with a ticket machine! BUT THEY WERE FUN!!!
P.S. fbb wishes to stress that apart from ADDING the odd washer or foreign coin, and specialising in lots of half pennies, he NEVER paid an incorrect fare. With "friends in high places" his conscience simply would not allow it!
Posted by fatbusbloke at 14:10