fbb tries, sometimes, to be an "innocent abroad" and think like a first-time visitor.   So a browse through the offerings of the enquiry office at Sheffield Interchange revealed a series of area guides. The implication of the opening blurb is that the information will help with travel planning - it will provide "a snapshot of the local bus, train and tram services  from your area".   Hmmmm ...

The next pages give a diagram of the routes covered by the booklet; in this case Area 8, Bents Green, Dore, Ecclesall, Lodge Moor and Totley.   Looks very helpful ... 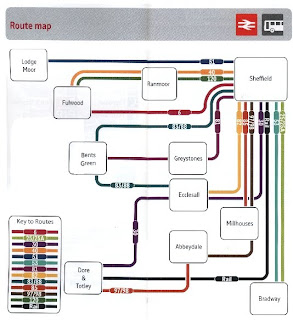 ... until you look closer.   If you were really the innocent abroad which route would you use to Bents Green, for example? 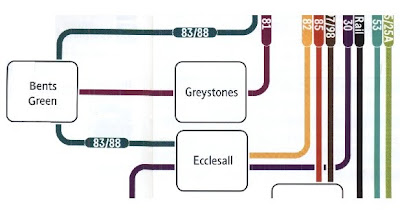 The 81 is drawn as the most direct, but it isn't.  You need the 83 or the 88 which do NOT terminate at Ecclesall - they do a large one-way loop passing Ecclesall Church on the outward and the return leg of the journey.   Ecclesall is, like many suburban place names, a rather ill-defined area, but the church would seem to be a clear focal point. The fbb map explains what the buses do, with the Bents Green "loop" starting at Ecclesall Church.! 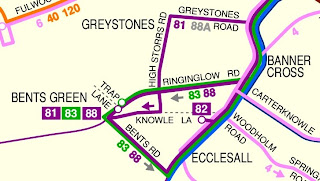 More worrying would be a possible trip to Dore. 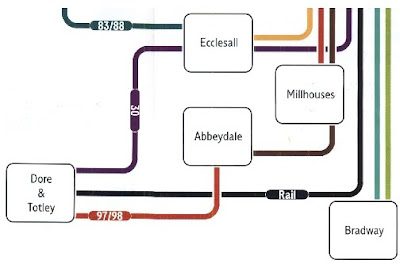 The box labelled "Dore & Totley" (the name of the station) implies that service 30, 97 and 98 are all available.

Unfortunately the 30 goes nowhere near Dore & Totley Station which, although it IS (geographically) in the Parish of Dore it is about a mile from Dore and a mile from Totley.   Indeed there is no public transport from Dore & Totley Station to Dore Villlage as such, although the 98 gets you closest: for the "more mature" it is quite an uphill trek! 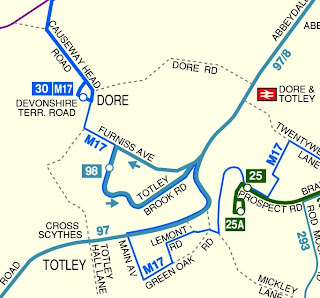 Lessons to learn.   Line diagrams need to be sensibly realistic.   Alright for London Undergound when you can't see anything anyway; but surely a more realistic map showing at least some landmarks would be easier to understand and give the traveller some confidence.

And, anyway, what about a train to Dore and Totley Station?   Having told me about a "snapshot" of services (including rail) the snapshot of the train service is blank!   I am referred to the South Yorkshire rail guide.   This, despite the fact that the service is at an hourly clockface interval throughout most of the day and the whole timetable would fit easily on the  "look elsewhere" page.

It's a good thing fbb is NOT an innocent abroad - if he were he would be befuddled totally by South Yorkshire's very rough rough guide!   But, if you think the map is less than helpful - wait till you try to unravel the timetable guides.