A further look at South Yorkshire Travel's area 8 guide is very revealing, revealing nonsense, that is!   Lets start with Stagecoach 120 which claims to run "about every 5 minutes"  Monday to Friday daytime. 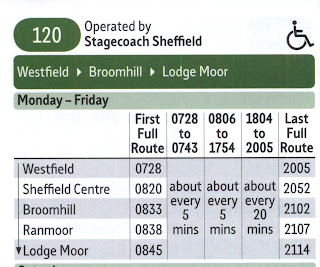 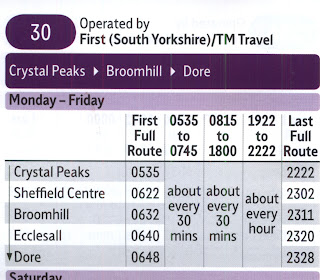 Then there's the 30.   It says it runs via Broomhill.   But it doesn't, not really.   Agreed, geographically it does, just about, skirt the Broomhill area; but never would any Sheffielder catch the 30 to Broomhill or advise anyone else to do the same.   Incidentally, neither the 30, the 40 or the 120 admit to serving the Hallamshire Hospital; surely one of the most important likely stops needed by the occasional and unfamiliar traveller.

Then there's the 81!   Its distinctive feature is that it is the only bus that serves Greystones.  But this does not appear on the timetable summary - it's only a box on the map.   But what about these crazy frequencies? 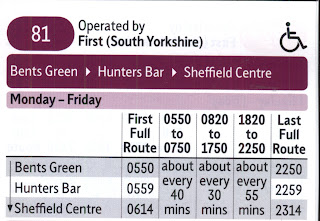 In fact buses leave Bents Green at 0550, 0650 then every 30 minutes to 1850, then hourly to 2250.   So where does "about every 40 minutes" come from?   Or, "about every 55 mins"?  Maybe someone has written a computer program which performs some weird mathematical manipulation of data rather than telling people what they want to know.   Now that IS a surprise!

And on Sundays we are told that the buses run "about every hour" - again TWADDLE!   Buses run EXACTLY every hour throughout the day.   Of course THIS leaflet avoids the service 88A confusion (see earlier blog) by ignoring the later Sunday evening journeys completely; so tough bananas if you want to get back to Greystones after 2000! 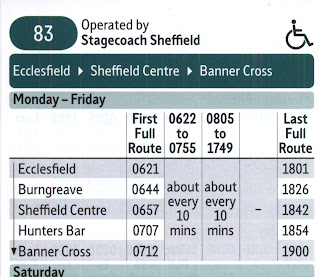 A repeat of the fbb map is a reminder. (see previous blog!)

So:  The 40 and 120 don't run every 5 mins, the 30 doesn't run via Broomhill, the 81 runs either half hourly or hourly and not every 40 or 55 mins and the 83 and the 88 do not terminate at Banner Cross.   Apart from that, the "snapshot" of services is very clear - as clear as mud - a snapshot horribly out of focus!   So the question remains; do the compilers of these leaflets ever travel on the buses; do they know where the localities are?   Unlikely!