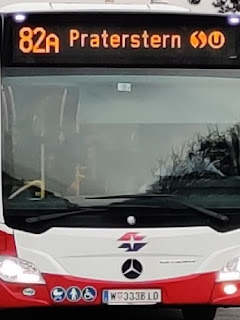 Praterstern is a major square in the Leopoldstadt district of Vienna, Austria . The square features the column to Admiral Wilhelm von Tegetthoff. 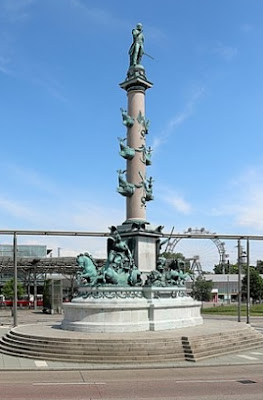 And the Admiral who is admirably up the pole?

Wilhelm von Tegetthoff (23 December 1827 – 7 April 1871) was an Austrian admiral. He commanded the fleet of the North Sea during the Second Schleswig War of 1864, and the Austro-Prussian War of 1866. He is often considered one of the best naval officers of the 19th century, due to his tactical inventiveness, sense of command, and inspirational leadership.

It turns out that Praterstern is a very round Square; a large roundabout in fact, with a public transport interchange in the middle. 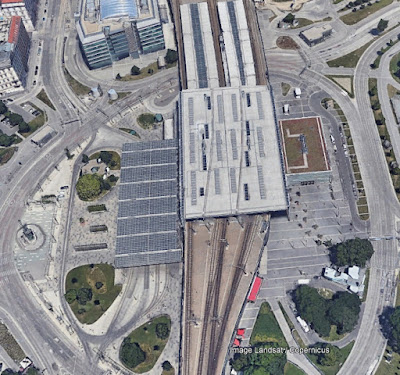 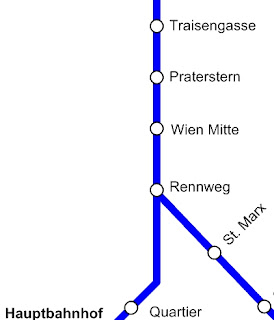 This lies on the core S-Bahn route (shown in pink on some U-Bahn maps) one stop north of Wien Mittle (Vienna Middle) the stop nearest to the centre of the city. ÖBB has an excellent diagram of the station and its appurtenances. 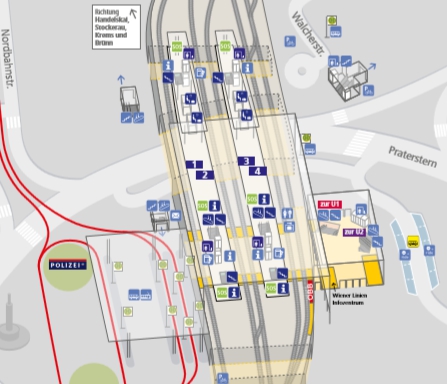 The platforms are on a viaduct, accessed by stars and escalators from a shopping mall. 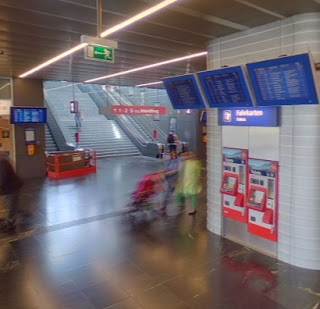 fbb could not prise any real timetable from the ÖBB web site, but the clicknology would create a personalised timetable between two stations, a sort of extended journey planner. This offered a total of approx 9 trains every hour ... 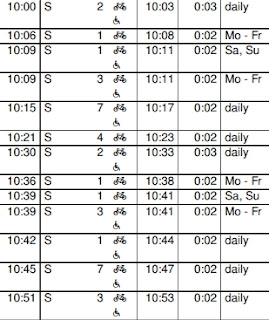 ... on the core S-Bahn route; although it would not tell me what their ultimate destination was. This line works a bit like Thamelink's core (but less frequently). Note that most of the trains run at the same times seven days a week!

To the east of the national rail station is a block with a brown-grey roof. 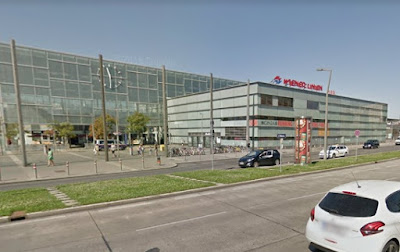 This is the Wiener Linien (City Transport) U-Bahn station. Here lines U1 (RED) and U2 (MAUVE) cross underground. 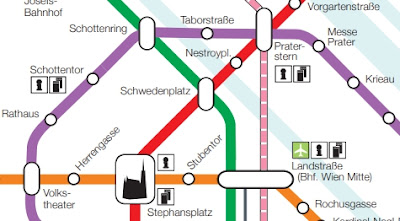 The line plan shows a selection of "turnback" sidings on both lines. 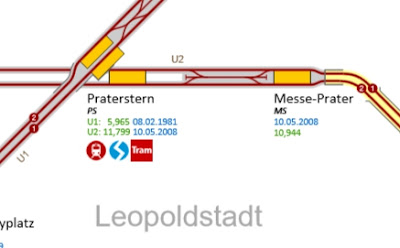 Signs are colour coded and direction is shown by the terminal station name; similar to the Paris Metro. 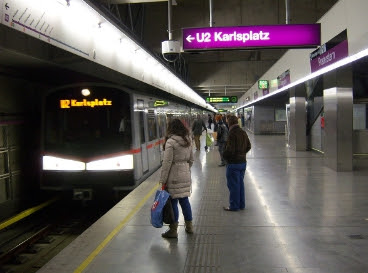 Trams and buses are at street level and most services use a fully covered bus station on the opposite side from the U-Bahn building. 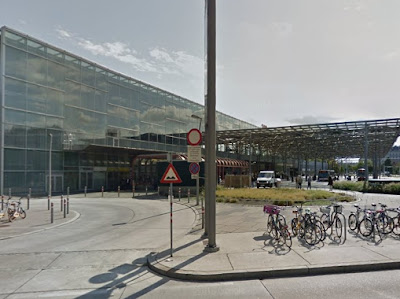 It is a very impressive facility. 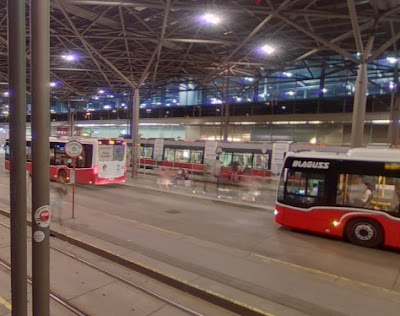 Trams O and 5 terminate at Praterstern ... 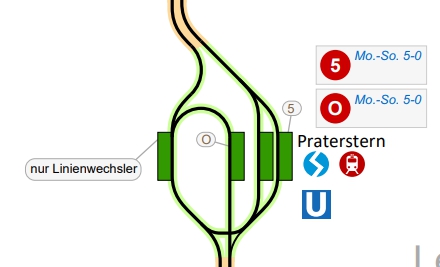 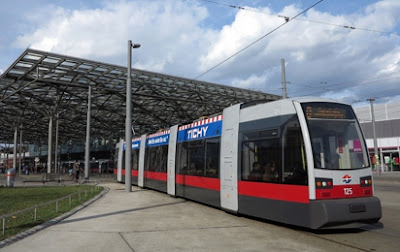 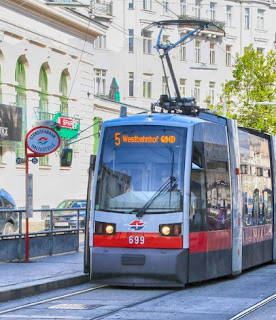 Tram 5 loops round the city centre to another major interchange at Westbahnhof ...

... complete with a spectacular building! 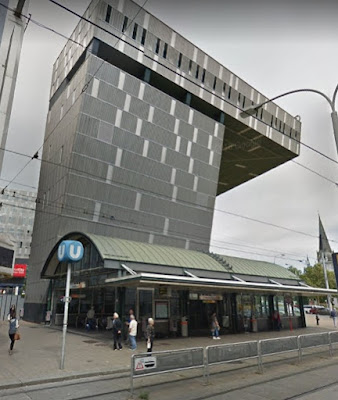 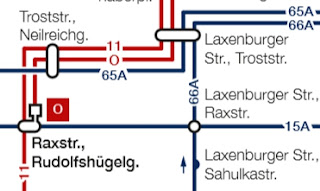 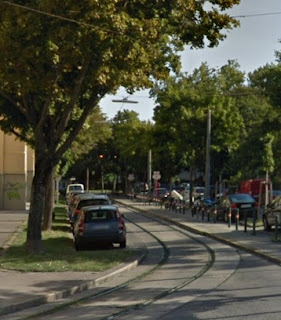 You can just spot the red circular tram stop sign along this residential street that was a no-go zone for Google Streetview.

fbb has not yet been able to discover why Tram O and Tram D have letters and not route numbers.

Historically, there were many more tram routes at Prastestern  ... 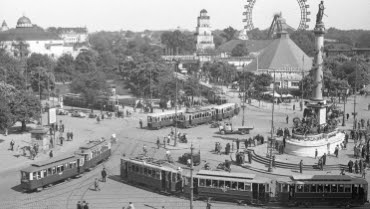 ... but official policy is to withdraw a tram route if it is covered by an U-Bahn service, so, as the U-Bahn has been extended, tram services have contracted. Again, back in ancient times, some U-Bahn services have their origin in tunnels built to speed up traditional trams. 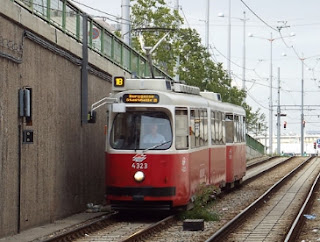 Which leaves us with the buses and No 3 son's 82A to Praterstern. 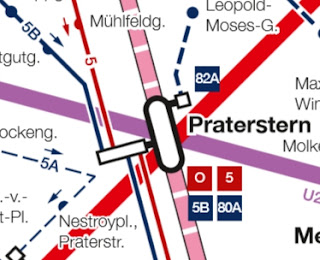 The 5B, operated under contract to Wiener Linien - hence the B suffix) ... 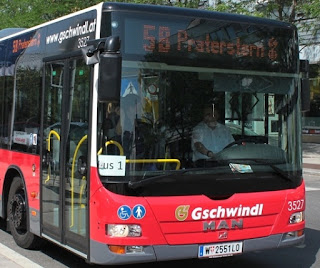 ... and the 80A (also a Gschwindl contract) both use the bus/tram station. 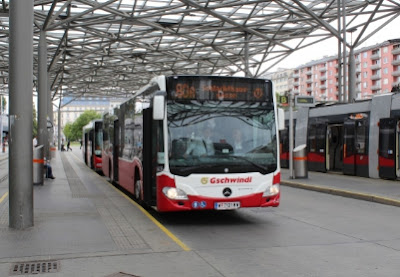 And yes, fbb did write that contracted routes carried the suffix B because that's what Wikipedia said and, no, he doesn't know why the contracted 80 is an A!

But the 82A seems to leave from somewhere different.


Next Vienna blog : Wednesday 19th February
Posted by fatbusbloke at 02:00