To be companionable, and to ensure the inner man was appropriately fueled, fbb joined Mrs fbb for refreshments. First stop was Exeter's Waterstones for coffee ... 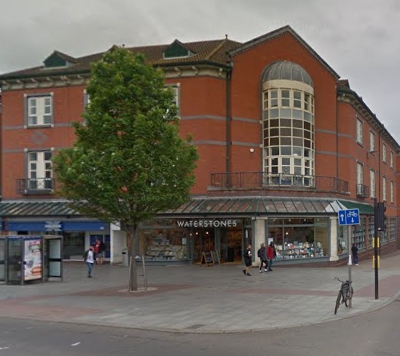 ... where a full and frank scheduling meeting was instigated. Mrs fbb would enjoy some retail therapy in Exeter High Street whilst el chubbo would continue his Birthday treat by taking an exciting (?) bus ride.

To ensure that the "gang" could catch Axe Valley Travel's return working at 1340, fbb's trip would need to start pronto-ish. So an early lunch was scheduled just along the High Street in Marks and Spencers' caff. 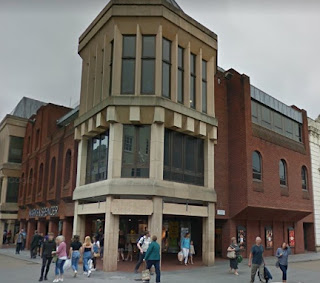 Bacon butty having been munched in double quick and possible indigestion creating time, fbb was back outside at High Street stop 5 (fortuitously - no, well negotiated!) just outside M & S.

fbb had glimpsed at these services back in Autumn 2019, soon after they changed. He was on a day out to Topsham and had no leaflet or map to guide him, so drew his own ... 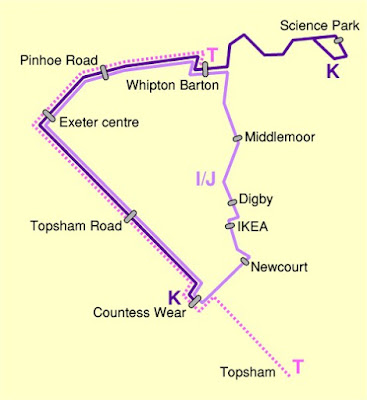 ... somewhat better, he avers with his usual modesty, than that provided by Stagecoach on their leaflet. 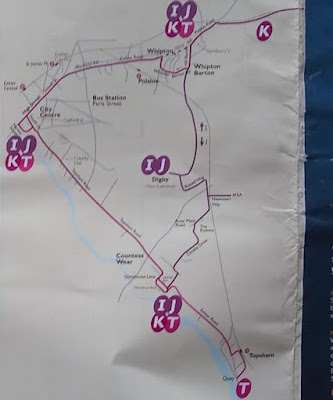 Note that the K disappears top right into the wide blue yonder!

The pedantic will notice, maybe, that fbb plonked the Science Park blob in the wrong place - but he was only guessing as you will discover.

There is a niggling problem with Stagecoach's map in the area of Whipton Barton. 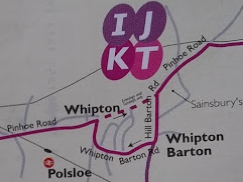 Those arrows on the loop are misleading. For most of the day buses run both ways along Whipton Barton Road; only occasional terminating journeys do the arrowed one way shuffle. The eastbound arrow on Pinhoe Road is explained in VERY small print so, make the print bigger and remove the westbound arrow completely.

Did Stagecoach amend a previous map where everything terminated via that loop? 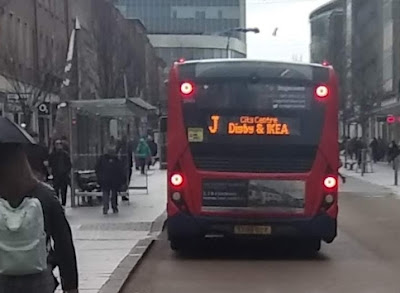 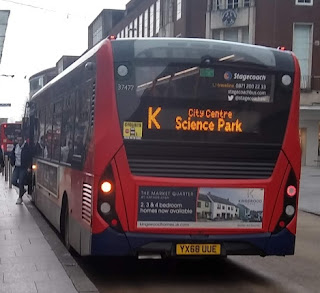 ... for his expedition to the Science Park, so new that it simply does not exist on some maps. 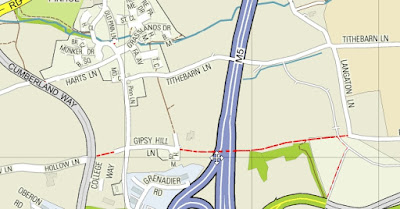 We are in the dark lands of development to the east of the M5, once the uncrossable boundary of Exeter expansion. Google earth shows us roughly what to expect. 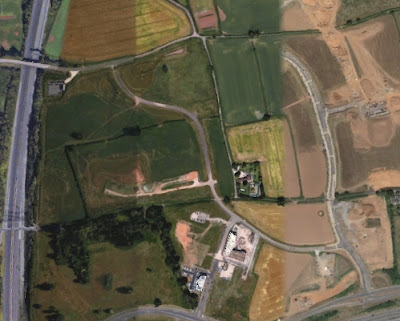 Our route is via that proto-loop on the aerial view above.

We left Exeter with a throroughly acceptable load ... 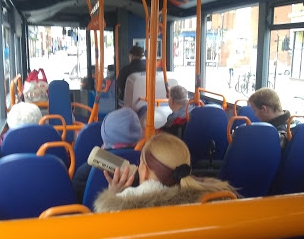 ... all of which had alighted by the loop at Whipton Barton. The final alighter left us on new-build Tithebarn Way ...

... at a stop not yet picked up by Streetview. 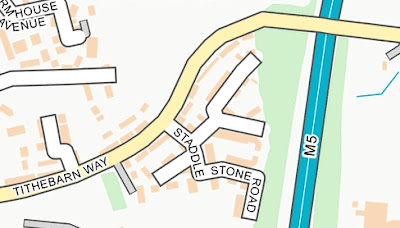 fbb alone was driven over the M5 bridge and into the jungles of the darkest Tithebarn Link Road. 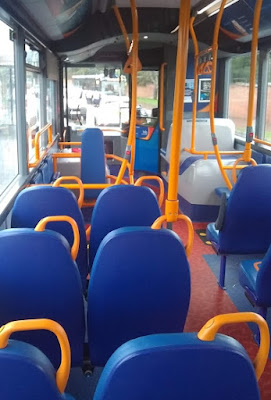 On Streetview we have just a country lane ... 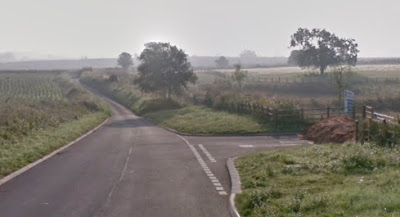 ... but our K will re-appear later at the former mud-blocked road on the right. Streetview re-establishes its view of the street a little later ... 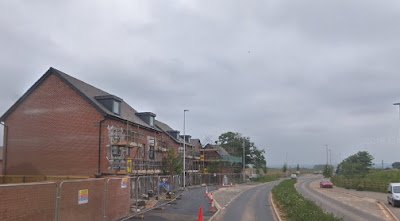 ... where lots more housing has now sprouted. This is "Minerva" part of the Tithebarn Green development. 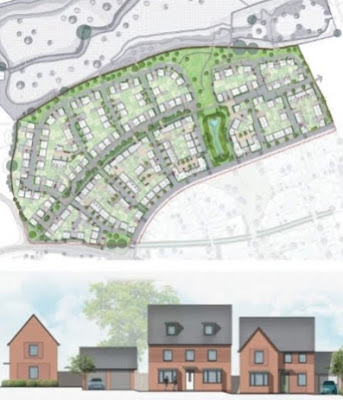 At the brow of the hill we turn right and almost immediately meet a sign for the Science Park. 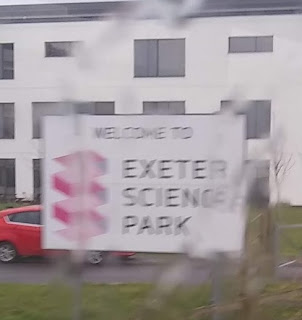 Appropriate for the expeditionary nature of the ride, we are now in a minor monsoon! Sadly, and a bit like the search for Dr Livingstone (I presume), there was no sign of human life and, obviously, no passengers for the 20 minute frequency. 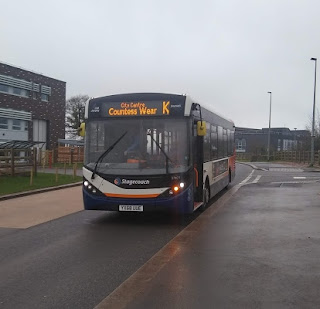 Presumably "Section 106" money from the developers is paying for the empty buses.

On the return journey to the city centre, the first genuine passenger was picked up on the Pinhoe road at the stop near the Pinhoe Hoard. 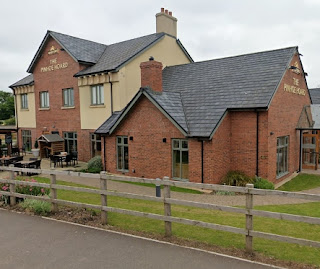 fbb was just musing about the unlikelihood of many families venturing thither in the monsoon when ... 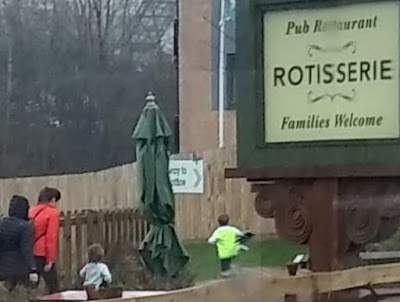 ... mum and dad and two little kiddies trotted off through the downpour to their limo having rotisseried. fbb was already feeling the limitations of his bacon butty at Marks and Spncers! 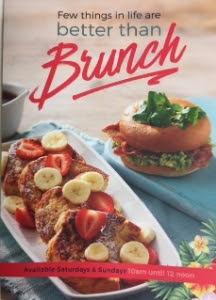 The Pinhoe Hoard - nope fbb had never heard of it.

The hoard was discovered in 1999 by local metal detectorist Jim Cobley about a mile away from the new pub and just over the border in what is now Broadclyst parish.

So it was really the Broadclyst Hoard?

Jim reported the find to the Royal Albert Memorial Museum in Exeter, where it is now displayed on loan. 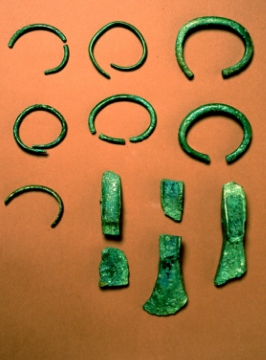 The hoard is a fine example of Middle Bronze Age metalwork (c. 1400-1200 BC). It consists of fourteen objects including five complete or near complete armrings, four fragments of armrings and five fragments of palstave. (as seen on the pub sign) 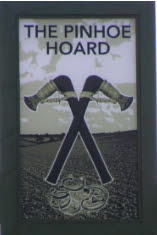 A Palstave is an early Bronze Age axe!

An uneventful but rain soaked ride ended at Sidwell Street ... 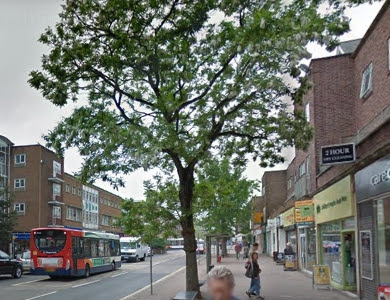 ...  whence fbb squidged damply back to the tattered remains of the once-grand bus station. Rather than wait in the draught and the sideways rain plus vertical drips from the roof, the gruesome twosome decided to avail themselves of a slightly delayed but toasty warm 9A and a shorter walk back to fbb mansions than from the 52. 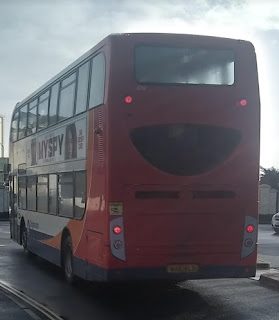 Tomorrow fbb will look at a few interesting (?) omnibological snippets from his visit to Exeter.