R is for Redeemer

What is the point of Christmas? Scrooge's "Bah, Humbug!" seems ever more appropriate. At best, the world of 2012 pays scant regard to the historical birth of a world-changing baby and even less regard to the ultimate reason for the season. BUT if you take the time to read on ... 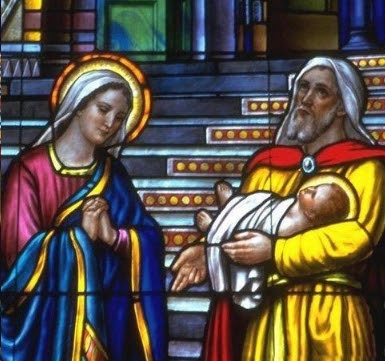 ... it was the duty of  parents to "present" their child in the Temple, the equivalent of a Church christening today.

The time came for Joseph and Mary to perform the ceremony of purification, as the Law of Moses commanded. So they took the child to Jerusalem to present him to the Lord, as it is written in the law of the Lord: “Every first-born male is to be dedicated to the Lord."

But some old bloke butted in:-

Simeon took the child in his arms and gave thanks to God: “Now, Lord, you have kept your promise, and you may let your servant go in peace. With my own eyes I have seen your salvation, which you have prepared in the presence of all peoples." 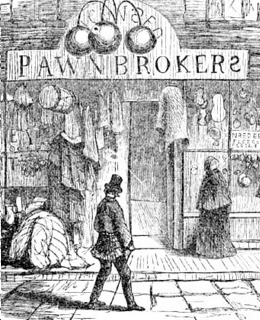 All true; but only a half truth. Jesus came to redeem the people. Wonder what, on earth, that means? 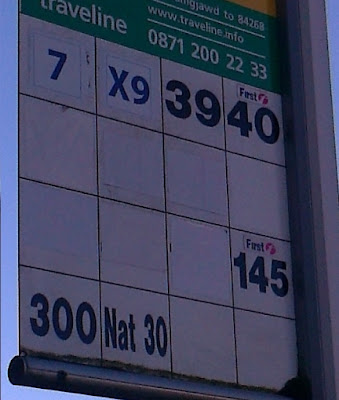 ... which show a superseded route 40 and the mysterious "Nat 30". A blog commentator suggested this might be for a National Express service, possibly also superseded. So fbb started to investigate. There is an "express" coach service that calls at Waterlooville; it is a vestige of the days when the A3 passed through the town and that was the only way to get to the "big smoke".

But it isn't route 30, and hasn't been for some time. The current timetable for the Portsmouth route shows an hourly service via the much improved A3 with alternate journeys calling at Guildford and occasional journeys taking a foray into Hindhead (as previously blogged - read again). 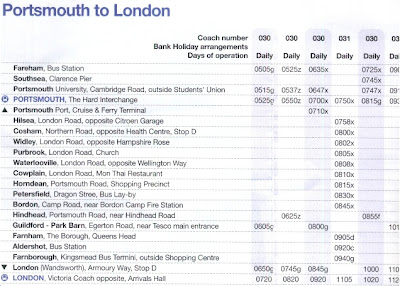 But it also shows one journey in each direction via, amongst many other places, Waterlooville. These journeys are numbered 031. 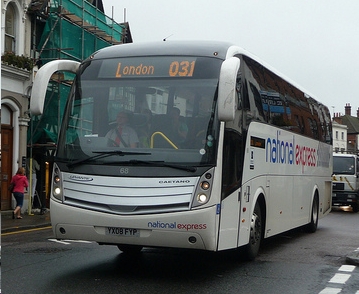 But therein lies a snag. Where does it stop?

Simple! It stops on London Road at Wellington Way.

Not so simple. This is London Road in 1965 with the site of Wellington Way precinct on the left ... 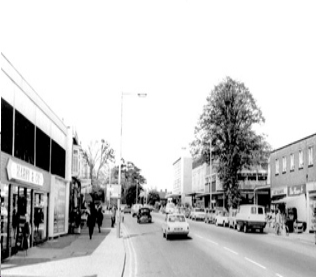 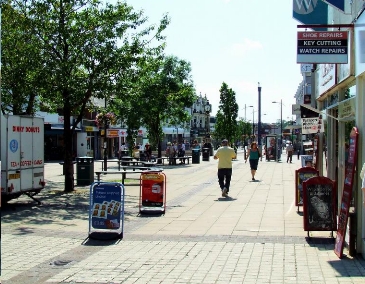 ... of the London Road pedestrian precinct! Even National Express would find it hard to get a coach down there. 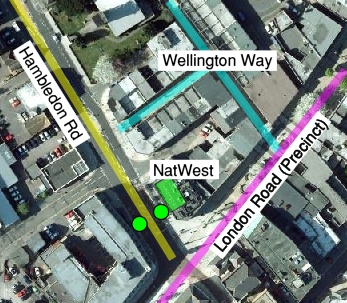 On this fbb amended aerial view, the actual situation is shown. The stops are outside and opposite the NatWest Bank, and close to (but not at) Wellington Way ... 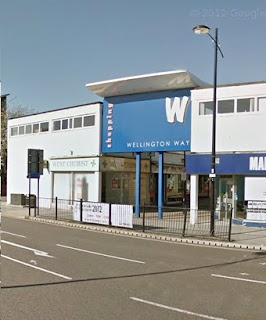 ... but definitely NOT on London Road. Other operators usually refer to the stops as Waterlooville Precinct sometimes with the (correct) "Hambledon Road" added. These form the de facto Waterlooville bus station as the authorities had the wisdom, lacking in many other communities, to provide bus only access to the former town centre crossroads.

And that incorrectly labelled pole is there as well. So, in the unlikely event of any of our readers' being in Waterlooville and wanting to catch a coach to, say, Aldershot, don't go to London Road, don't look for a stop outside of Wellington Way precinct and the coach won't be a "Nat 30" when it arrives. Apart from that it's all pretty clear.

For the record, the stops are here ... 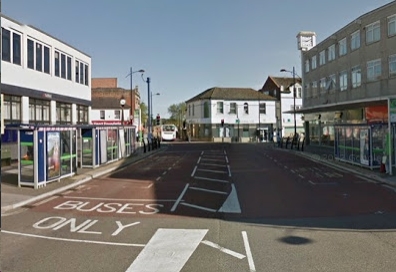 It's all very simple when you know how. Perhaps someone should tell National Express that London Road became a precinct in 1981!

Travelling by Public Transport is such fun!

Next Bus Blog : Wednesday 19th December
Posted by fatbusbloke at 09:05