J is for Joy 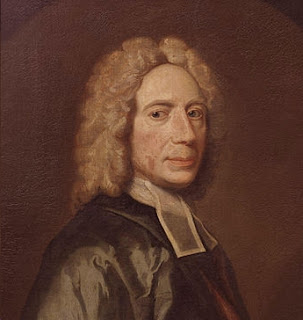 ... was a prolific and popular hymn writer,  credited with some 750 hymns. Many of his hymns remain in use today, and have been translated into many languages. He was a religious rebel, a non-confrmist, often speaking out against the failings of the established Church; thus he was unable to attend Uni at Oxford or Cambridge such was the blatant discrimination of the age!

Many people think that the Hymn "Joy to the World" is American because there it regularly tops to polls for popular Christmas Carols, but Watts was born in Southampton and lived most of his life near to London.

In fact, Watts was not writing about Christmas at all but about the second coming of Jesus at the end of time, when all will be judged against God's standards. Popular culture misses out some of the original verses; but read the words carefully and you will see what he was getting at.

Well, it was cheap. 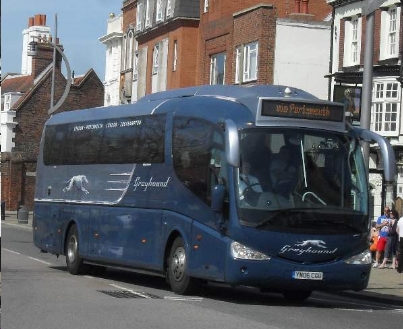 The last time fbb travelled from Portsmouth the London by coach it was on First Bus's now abandoned Greyhound service. See "Escape from Alcatraz" (read again). Correction, the ONLY time fbb has so travelled. Like colleague and pal Barry Doe, the chubby one is not a great enthusiast for road-based long distance journeying but ... 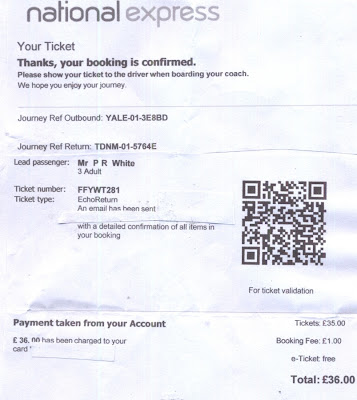 ... well, it was cheap. £36 return in total for three "seniors" (fbb, Mrs fbb and Julia) compared with the best that SouthwestTrains could come up with, namely nearly £60! It is increasingly difficult to work out why the fares were what they were, but, happily, the ticket downloaded onto fbb's laptop and all was in order for their trip. 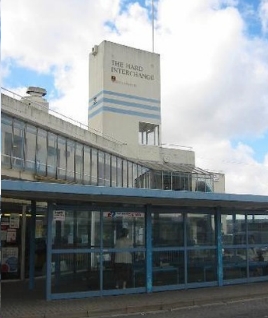 The facilities at Portsmouth are not particularly inviting, consisting of a glazed and covered sheep pen with hard plastic tip-up seats. All such were taken by the time the fbb party arrived at 0910 for the 0930 departure. It was very cold on Thursday 6th December with a dampness in the air which seems to reach right down into one's aged bones.

So when the coach failed to appear at 0930 the passengers' extremities were already somewhat frigid. 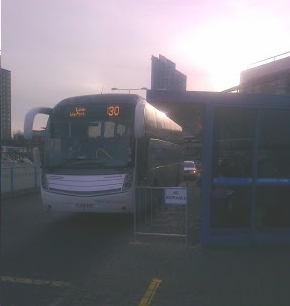 The 15 year old driver made no apology for arriving 10 minutes late and, after loading luggage and checking tickets, left just after 0950.

His only contribution to the journey was to play the silky voiced female pre-recorded National Express welcome message. We were told to put on our seat belts, an instruction ignored by most; and advised to read the safety cards in the backs of the seats. There weren't any! (Safety cards; there were seatbacks!)

And the lad turned the fans on; instantly blasting an icy gale throughout the vehicle. The Luckett's contracted coach had started its day at Fareham and, by Portsmouth, the heat ought to have been adequate. It wasn't. Everyone froze throughout the journey, again with not a word of apology. 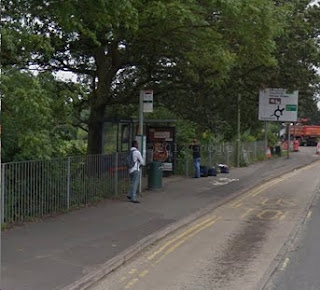 After a little trip to Guildford's Hospital entrance we retraced our tyre-tracks to get to the lavish National Express terminal building (!) where two alighted to warm up and two boarded. After a painfully slow grind though south London we were unloaded in the gloomy and uninviting arrivals shed at Victoria Coach Station ... 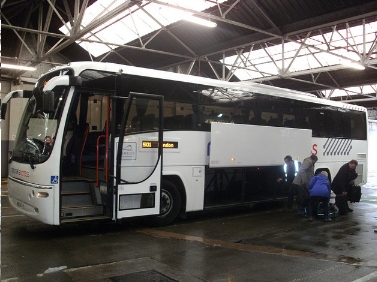 ... where, to add insult to shivery injury, the authorities charge 30p to P! The one consolation was a fresh sandwich and an excellent cup of tea served with great politeness in the wind tunnel snackery. Oh, yes, we were now 24 minutes late on a one hour and fifty minute journey.

A quick nip though Victoria Station to Wilton Road ... 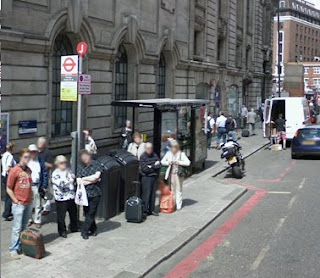 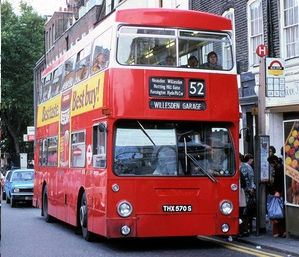 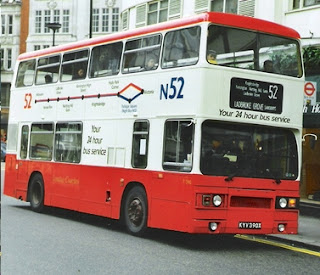 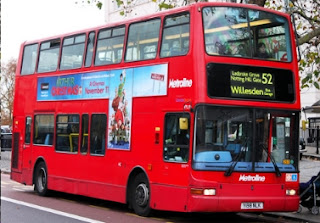 The bus ride was gorgeously warm and very soon the party was settled in their seats in the Royal Albert Jelly Mould to watch tennis.

Those unfamiliar with the event, like fbb, will be trying to work out how you can squeeze a tennis court into that rather small oval ... 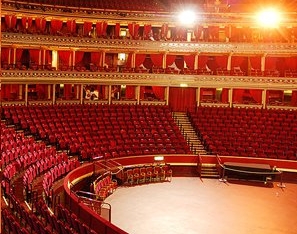 ... so all will be revealed tomorrow!

P.S. whilst waiting for his companions to finish their cuppa, fbb idly picked up a leaflet for the service 030 from Fareham and Portsmouth to investigate the whole service. 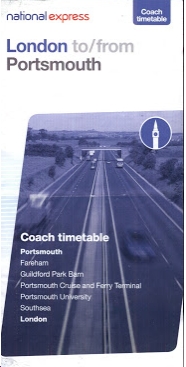 The investigation proved fruitless as the timetable was utterly out of date! 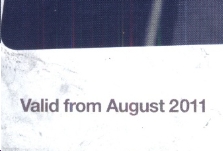 Next Coach Blog : Tuesday 11th December
Posted by fatbusbloke at 02:00