A new route to the City 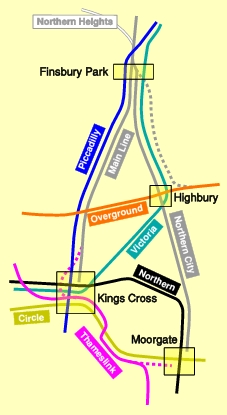 To understand the significance and delights of Moorgate from a railway point of view, it may be best to start from what is there now. So we'll stat at the bottom and go round in a roughly clockwise direction.

Thameslink  services from Bedford to Brighton and Sutton running via St Pancras and the so-called City Widened Lines as far as Farringdon, then via the Snow Hill Tunnel to Blackfriars and then over the Thames. Services used to run to Moorgate, but this spur was closed to allow for longer 12-coach platforms at Farringdon. This was the last train to leave Moorgate appropriately (?) adorned with the rather lurid Thameslink upgrade livery. 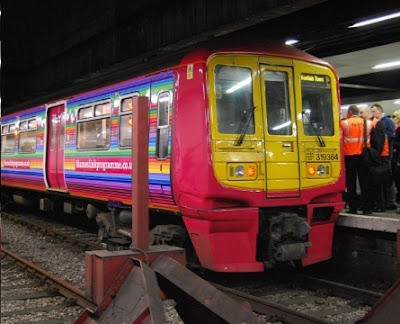 Circle  line Underground trains which no longer circle! From Hammersmith via the "Cirrcle" line to Edgware Road. These tracks also carry Metropolitan Line train to Aldgate and Hammersmith & City Line trains to Barking.

This network first opened in between Paddington and Farringdon 1863, reached Moorgate in 1865 and burrowed under the Thames at much the same time.

Northern  line (City Branch).  This, in the form of the City and South London tube line had arrived at Moorgate from the south in 1900 an was running through to Euston by 1907.

Main Line  opened to King Cross in 1852 having used a temporary terminus at Maiden Lane from 1850. 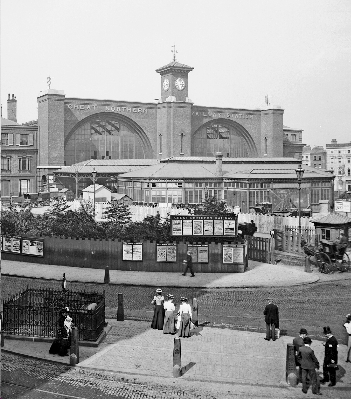 Overground  line (the North London Line) opened in the early 1850s and now runs from Richmond to Stratford. 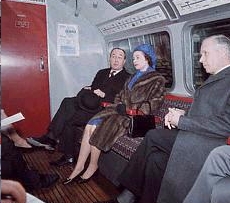 The latest arrival in the "City" area will be Crossrail, but fortunately the only stop on the fbb set of lines will be Farringdon.

Originally, the "Circle" lines and the "Widenend" lines platforms at Moogate were mostly in the open air ... 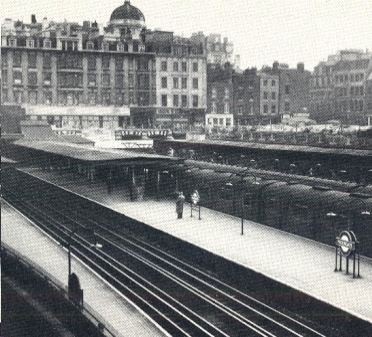 ... seen here with the terminating platforms on the right. The whole area was "rafted" and covered with the obligatory office block with the result that the station then appeared to be "underground". 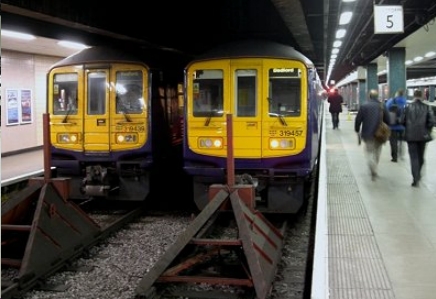 Here two Thameslink trains occupy Platforms 5 and 6 with the Circle etc. lines on the right. The last such train ran ...

Bur we have left the  Northern City  line to the last. Presently this carries stopping trains from northern suburbs and Hertfordshire towns on Mondays to Friday only, leaving the main line at Finsbury Park. It is a true "Tube" line running in proper tunnels and sharing Old Street and Moorgate stations with the Northern Line. But it carries full-size "big" former British Rail electric trains. 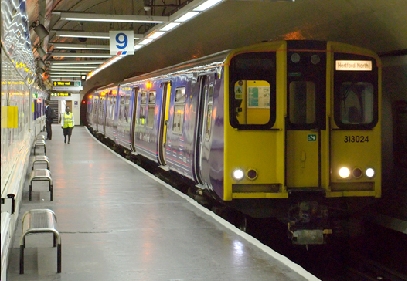 This line opened in 1904 and forms the core subject of this series of blogs. The Underground underground station at Moorgate was, as opened, separate from the Circle and Widened Lines facility with an imposing building situated in a neighbouring street. 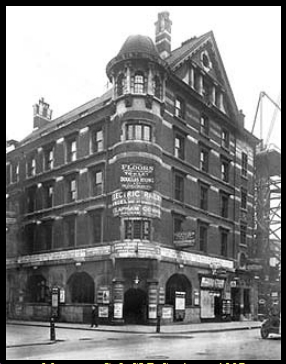 The next blog in the series will look at the origins of this line and its uniqueness.

Meranwhile, yesterday, Sons Nos 1 and 3 took fbb to see the James Bond movie "Skyfall". This featured some tense action scenes on London's Underground at Temple and Westminster stations; plus action on a train going to Richmond. In one scene the baddie creates a crash whererby one of these "District Line" trains plunges through a blown-up hole in the track and on to James Bond. Very painful!

Readers with only limited knowledge of London's tube system will immediately recognise that the trains illustrated in these incidents ... 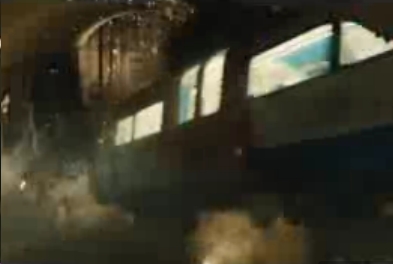 ... are formed of deep level tube stock that never operates between Temple, Westminster and Richmond. Spot the difference ... 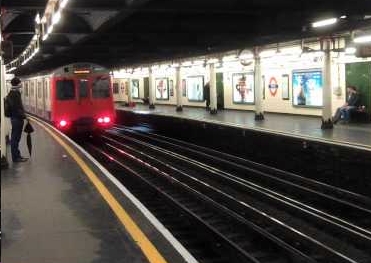 ... between a real District Line train at Temple and the "Skyfall" Offering. With a budget of at least 150 million pounds, surely someone could get the right size of Underground train! 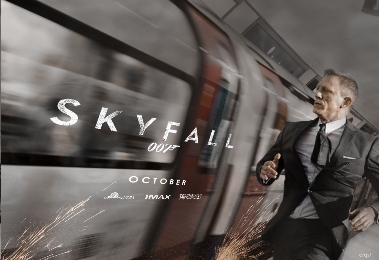 Next Rail Blog : Sunday 30th January
Posted by fatbusbloke at 02:00