We now know that the loco in the twittered picture which attracted fbb's interest is on an industrial line from Baddesley Colliery which strikes out north east from the pit and makes its way towards ... 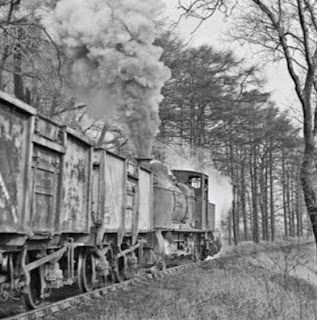 ... what? Thankfully the on-line maps provides a fairly detailed diagram of what the train is aiming at. 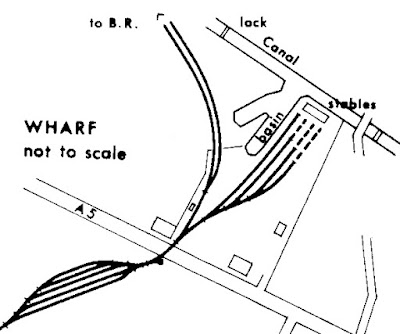 Historically the first target for the line was the Coventry Canal, where Baddesley Wharf was built. Here coal was transferred to longboats for distribution throughout the canal network. Nothing remains of the original wharf, except perhaps a few dockside "kerbs". 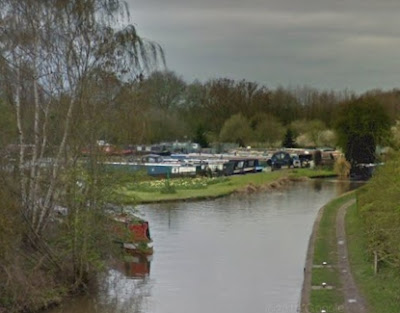 ... and the aerial view is inconclusive. 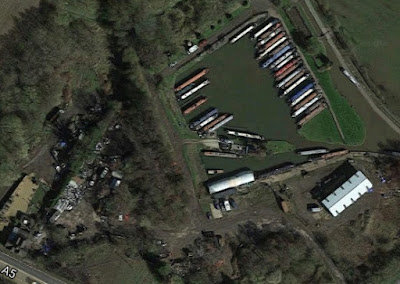 But with the coming of the railway, new sidings were added to allow coal to be exchanged with London and North Western Railway trains. 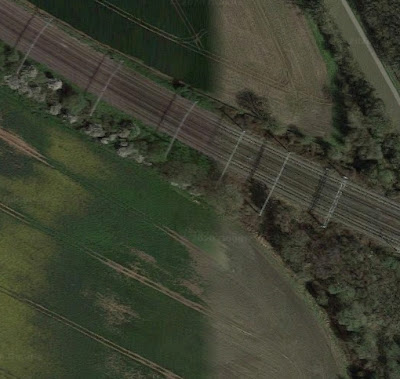 Nothing remains, of course, except a curve of undergrowth from bottom right and a thicker thicket where the sidings once stood.

What else can we see today?

Here is the original photo which inspired fbb's researches. 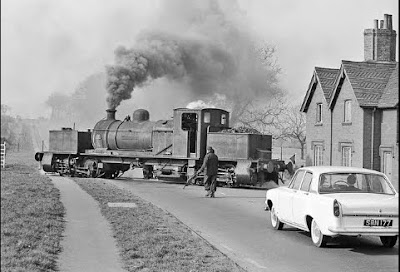 And here is a modern map shwoing the wharf, a footpath and two buildings on the north bank of the A5. 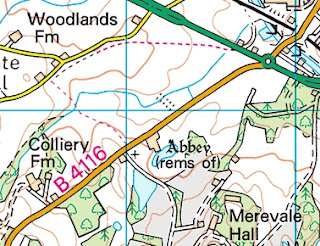 It is the second pink square after the roundabout that is the site of the original snap. 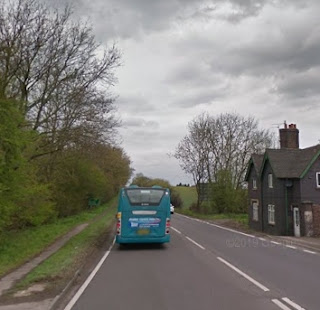 To the left is the gateway to the footpath which follows the trackbed of the former line. There were additional sidings here where the undergrowth is thickest.

Then to the right of the right hand house is a gateway. 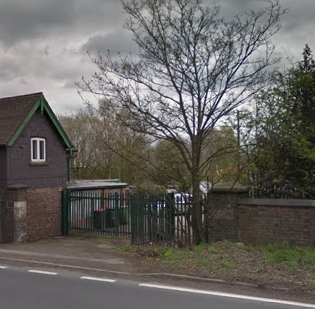 The gateway was the entrance to the dock/rail interchange facility. 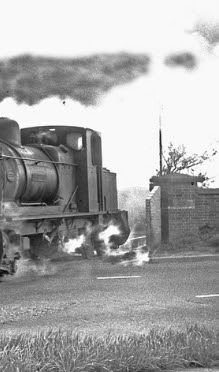 There are several pictures on-line of trains at this entrance/exit. 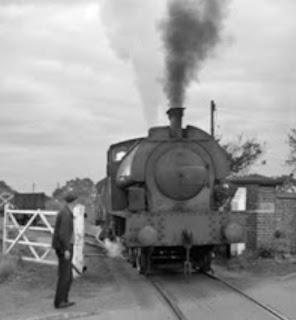 The saddle tank below is running light, possibly just across the road to collect more wagons from the "woodland" sidings. 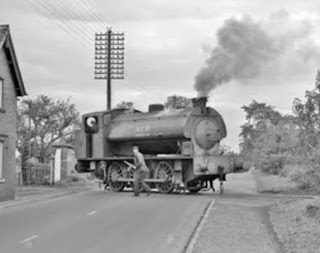 But beware on-line information. Minions Wharf is nearer the centre of Atherstone, just off Coleshill Road. 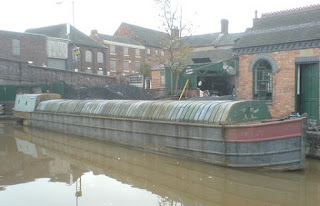 A small housing estate has the name Minions Court ... 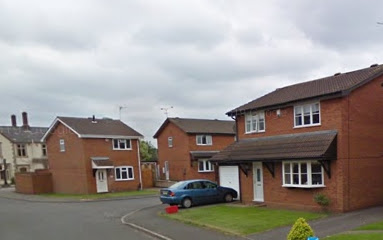 ... but the wharf itself is disused and dilapidated. 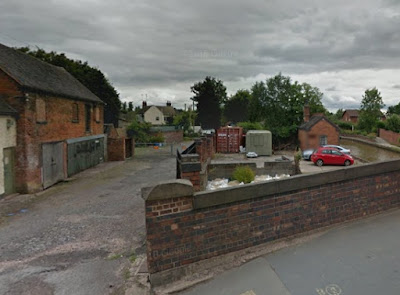 The text description of Minions Wharf ... 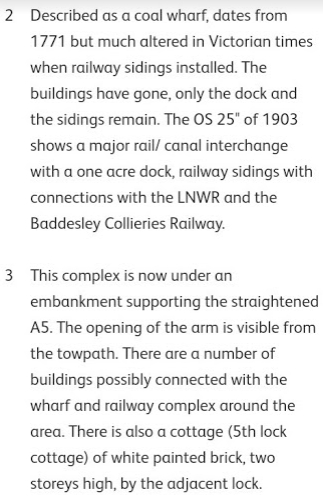 ... is actually a description of Baddesley Wharf! 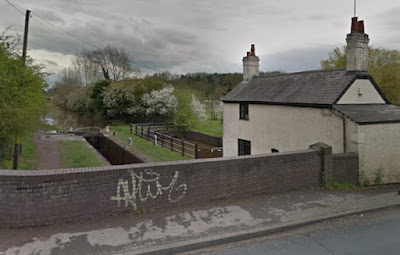 The lock and cottage referred to above are close to Baddesley Wharf but there is no A5 embankment in sight!

But it is all on-line!

Baddesley Colliery closed in 1989; but fbb has not yet found a date for the last trips along the sidings to Baddesley Wharf.

Maybe somebody out there knows the answer.

Station Hill Imrovement Scheme
A very early development at Peterville Quarry Railway was a very low relief "townscape" perched perilously on top of a solid looking retaining wall. The "picture" was of property on a road leading down the hill from the church to the road entrance to the former quarry and now the railway's station (off scene).

The next re-fettling in the current expansive lockdown modelling fantasia was to see what could be done to improve this area. Here is the first effort, put in place on Monday, last.

Next to the end terrace is the premises of Pettifer and Company, Agricultural Engineers and Hardware Retailers - a rejig of an Airfix/Dapol station booking hall kit. 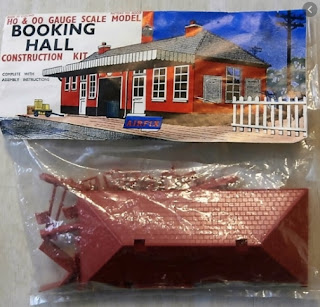 Then comes the Peterville Working Mens' Club and Institute. This was part of a very old Hornby self-assembly pre-coloured station ... 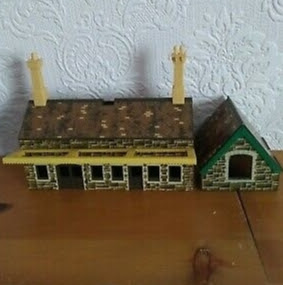 ... and an equally ancient signalbox kit. 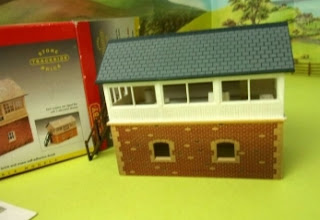 fbb was given an incomplete selection of bits which he thought might be useful.

The two bungalows started life as a second-hand Hornby kit ... 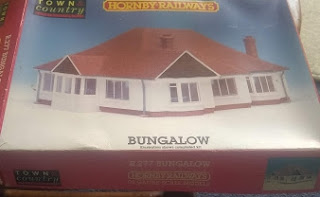 ... now sold as Fordhampton care home or health centre by Gaugemaster. The results are not satisfactory and the buildings may be replaced in due course. 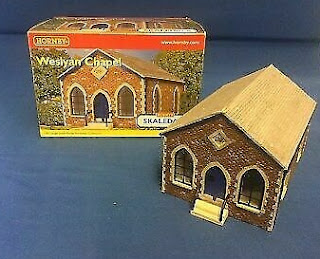 This was a Hornby Skaledale resin casting, fully decorated. fbb tried to slice of the front with a view to using the rest of the building elsewhere. Nobody told him that resin buildings shatter like glass if you try to saw them! Only the front elevation could be recovered from the debris.

Each building has been fitted with a plywood "tab" ... 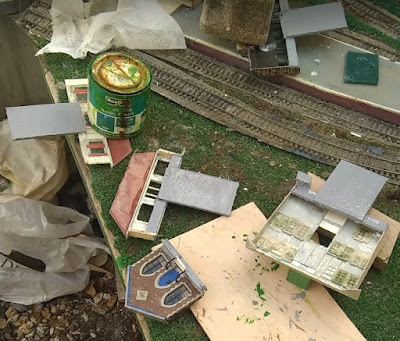 ... which slides behind the chunk of ply that forms the basis of that retaining wall. Buildings can be re-positioned to better effect or removed for maintenance but, above all, they don't get blown off with the gusts of wind which can often swirl round fbb mansions, situated, as it is, just a few yards from Seaton's sea front.

This is a work in progress which may be impeded by a deteriorating meteorological situation over the next couple of days.

Next "Read An Improving Book" blog : Thursday 11th June
Posted by fatbusbloke at 02:00