SSC or AGH?
Known for the first few years of its life as the Second Severn Crossing (SSC) - Ail Groesfan Hafren (AGH) - the structure was renamed Prince of Wales Bridge - Pont Tywysog Cymru - in 2018. 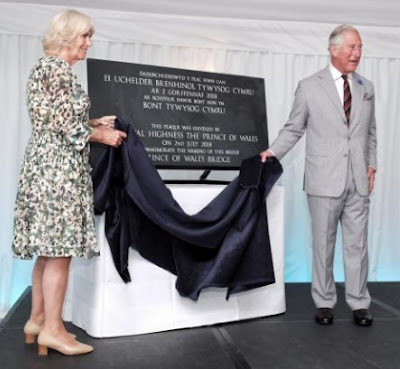 Interestingly (?) the crossing consists of two lengthy viaducts across tidal mudflats with the distinctive cable-stayed bridge over the navigable channel in the middle. 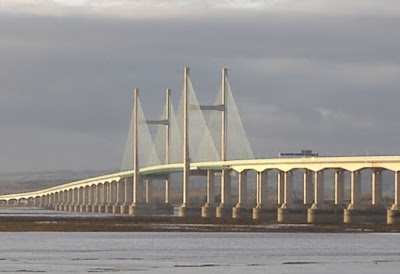 That central section is known as "Shoots Bridge". The juxtaposition of the current Severn crossings are shown in this map. 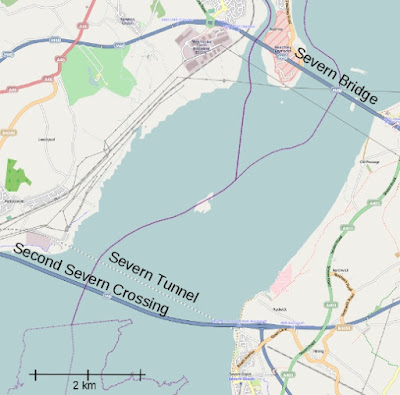 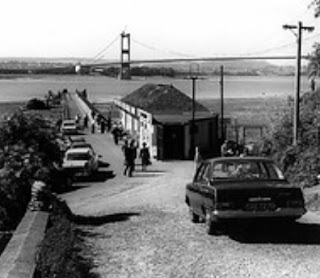 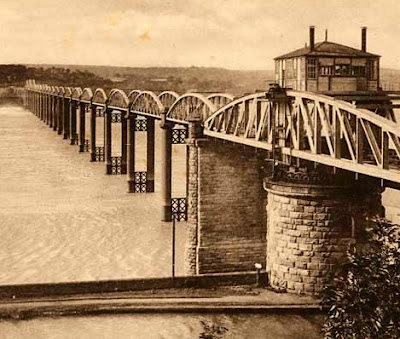 ... demolished after one of the main spans was felled by an out-of-control barge in 1960.

But it is the monorail under HRH's bridge that evoked fbb attention after reading of its existence in a crime novel.

Sadly, fbb does not think you will ever see it for real.

A monorail with rapid access train (RAT) was installed hanging beneath the crossing deck to facilitate inspection and maintenance, but it closed shortly after opening because cracks were found in the welds between steel rails.

As we shall see "rapid" might not be the best adjective to use. 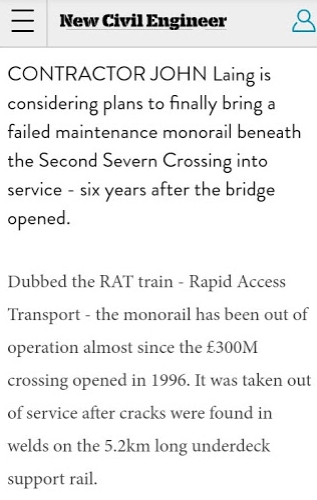 ... but fbb has been unable to discover from easily accessible on-line sources whether Laing's ever did re-fettle it. 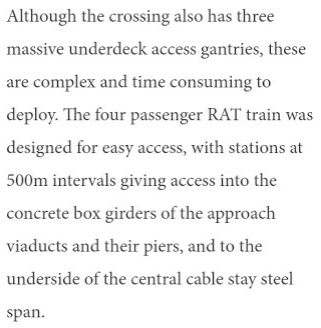 We already know (from yesterday's blog) that it ran along a central girder running between the two concrete box sections of the bridge deck. 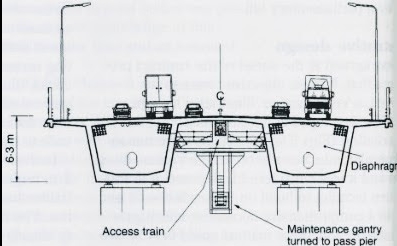 There are, however, a few more clues to tell us more.

It was built to allow smaller maintenance teams plus their equipment to gain access rather than powering up a huge access platform one of which can be glimpsed below this pic of the RAT ... 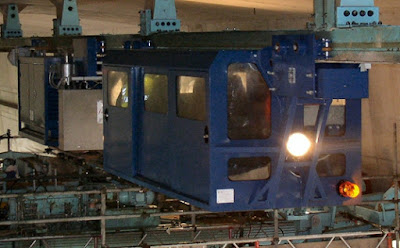 ... and which spans the gap between to two decks in the diagram above. 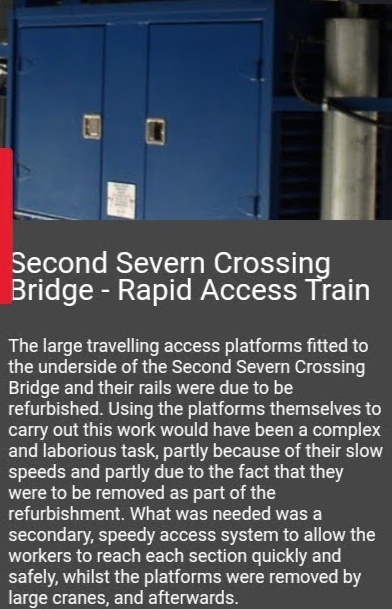 Although just one "train" was used it offered a service to a number of potential work sites. 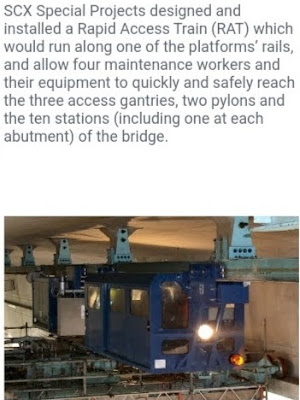 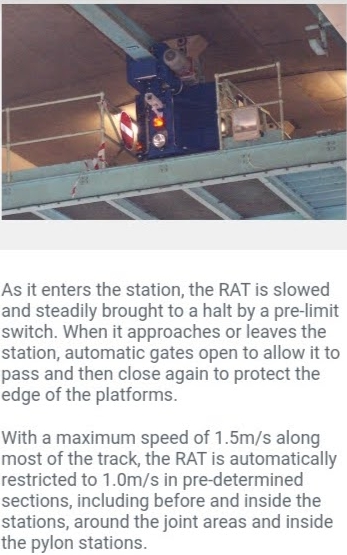 No doubt the keen mathematicians amongst our readers can turn a speed of 1 metre a second into miles per hour; but to save too much brain exercise, Google has done it for us.

So walking would be more "rapid"!

And you can watch its "rapid" progress on a YouTube video. (Do not panic, there is a bit of discontinuous "proper" train travel at the beginning and the end of the video.)
Does the blue colour of the train in the earlier stills compared with the yellow in the video imply that there was, indeed, a livery change on refurbishment?

Either way it would be fun were it to be open to the public; fun yes, but with only four passengers, one of whom must be the driver ... 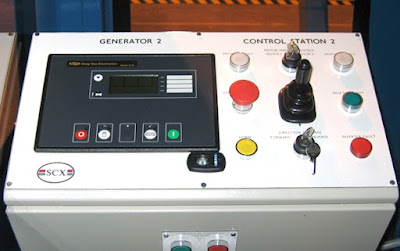 ... fbb guesses it would be very very expensive!

And The X7 Survives
Stagecoach withdrew its services over the River Severn after business on 14th June.

Buses Magazine for July reported the end of a service which goes back years and years.

First became the sole operator after Stagecoach pulled out of a joint service and when First threw in the towell, Stagecoach took the route on enthuiastically as their X7.

But Uncle Brian's chaps and chapesses couldn't make their usual whopping great profit margin (?) so Buses reported that no operator had been found to take it over from 15th ... 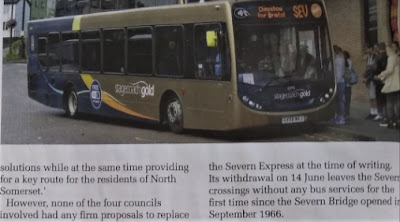 ... because no local authority was willing to offer a bag of lolly to support the service!

But the problems of a monthly publication and its lead times meant the by the time Buses hut the newsstands, this had appeared ... 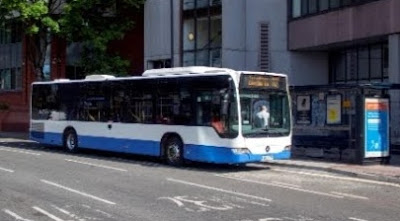 ... a twittered picture of one of the first X7s operated by N A T arriving in Bristol. 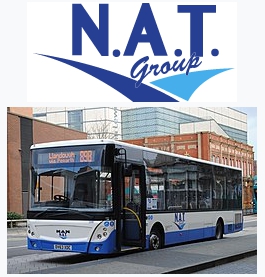 The announcement was dated 10th June ... 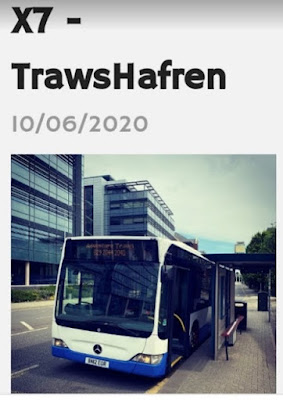 ... with yet another new brand name. 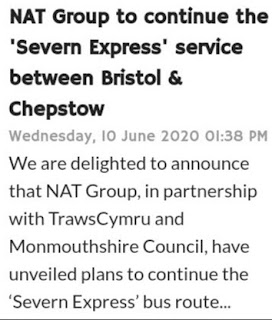 The route is more akin to Stagecoach's X14, introduced in response to protests when they withdrew the X7 from Cribbs Causeway shopping centre. 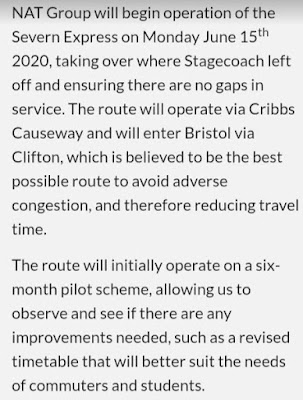 The timetable is hourly Monday to Friday only with positioning journeys from an N A T depot at Magor.

fbb assumes that the route is via the old Severn Bridge and the M5.

You do wonder how long it will last! The vibes are not that good.

Established in 2008 with four buses, New Adventure Travel has now grown to have over 100 buses and coaches in its fleet from May 2020 - with most buses being second-hand from London.

In February 2018 the business was purchased by ComfortDelGro. Adam Keen of Damory Coaches was appointed Managing Director of New Adventure Travel.

The company has a certain claim to fame as operator of competitive services against Cardiff's municipally owned bus company. 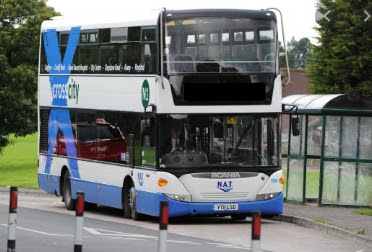 Health and Safety At Last!
Visitors to the Peterville railway and castle should be pleased that at last their safety is being taken seriously. A stout fence now prevents accidental plunging down the quarry face ... 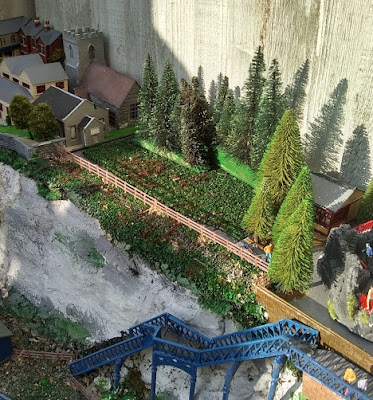 ... and straying onto the tracks is further impeded as customers make their way from castle (via steps) to platform (via footbridge) and vice versa. 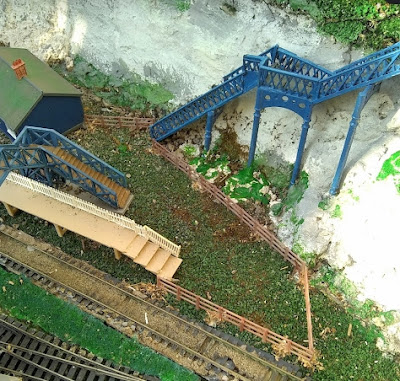 Disabled persons need to trundle on their devices via Church Square and Station Hill!

Falling off the viewing platform (cream concrete) is very possible, but normally some of the railway's more interesting coaches are parked there for the attention of excited enthusiasts.

Tomorrow, amongst  other things, we go to Salisbury.