But First The Last
From Sheffield Roy, pictures of the last T M Travel journeys on Service 65. 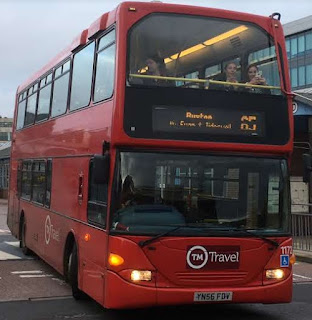 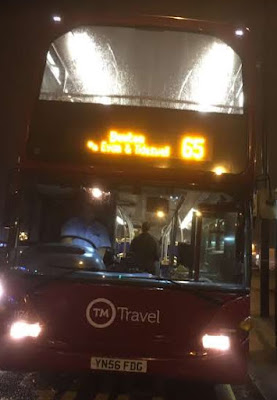 Both vehicles are from a batch operated by Metrobus in their Transport for London fleet ... 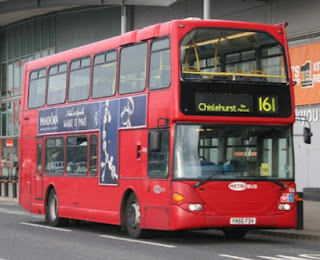 ... from which they retain their TfL red paint job. Were T M Travel bosses hoping for huge numbers of Nostalgia Nuts riding the last ever T M Travel trips on the 65?

Note for High Peak Buses - double deckers would be a marketable attraction for the route, especially in summer. 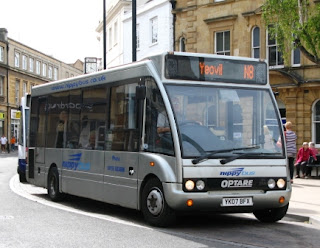 Nippy Bus was founded in September 2004 beginning with five partially demand responsive bus services, 4 of which (N1, N2, N4 & N5) started from market towns via villages in South Somerset to Yeovil serving parts of the town before reaching the centre. Route N3 operates as a local circular town service within Yeovil. After First Somerset & Avon cutbacks the company launched daytime services route N7 to replace First's 61A and route N8 to replace First's 56 under contract to Somerset County Council. 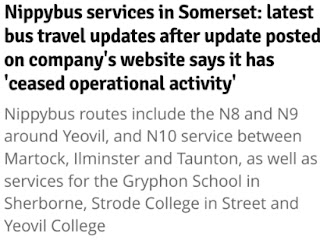 Remember Towcester to Brackley where a service of zero buses during the day is to become a bus every 30 minutes? (read again). There was a comment on the blog that this change, due from November 5th, was postponed; but nobody seemed to know why.

Steve Burd, Stagecoach boss in Northampton then explained the problem. 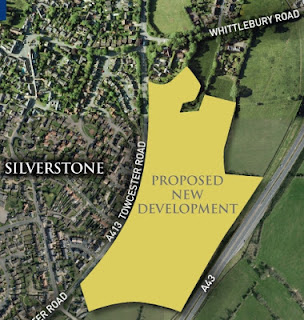 None of these. Apparently the bus stop NaPTAN code for Catch Yard Farm Estate did not work and so Stagecoach's registration went phut.

Stagecoach submit their registrations electronically via the over complex, over engineered, over costly system adopted to make life difficult by The Traffic Commissioners.

Sorry folks, you can't have your buses because the confuser is confused!

To speed up the buses, Travel West Midlands are ... 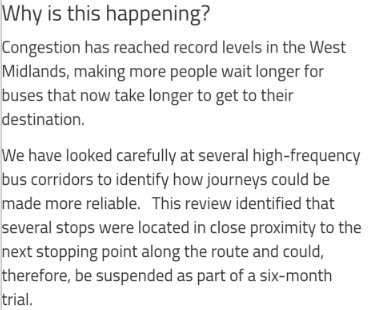 But surely if these stops are "little used", then the rarity of a passengers will hardly delay the service? Generally Birmingham Corporation's lovely circular bus stops ... 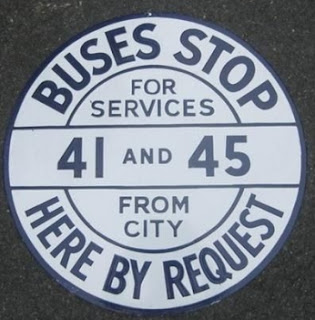 ... did tend to be close together. This encouraged folk to catch the bus because the stops were nearer their homes and places of work. 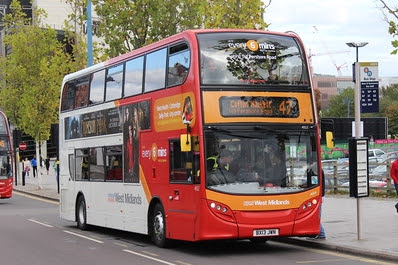 Here are some that are removed from the 45 and 47. 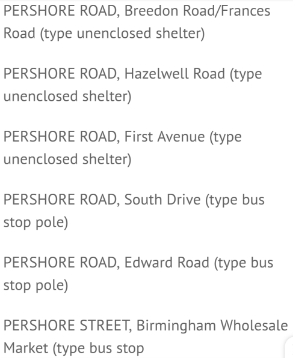 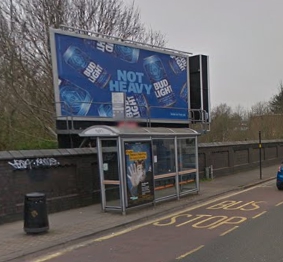 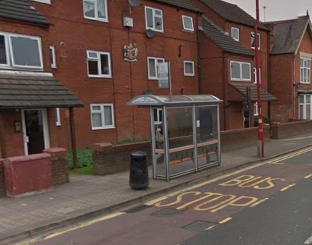 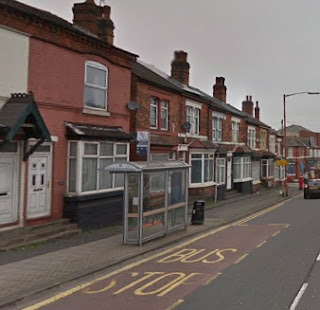 Looks pretty arbitrary to your author but maybe local knowledge supports the plan.

But then fbb was always well aware that bus services would run so much better without all those pesky passengers wanting to travel.

About time too! Trams are often packed to the roof, even off peak, so an improved service is long overdue. 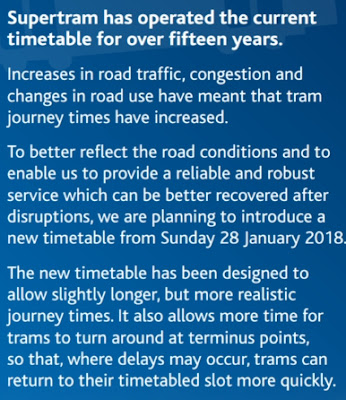 And how is this improvement to be achieved? 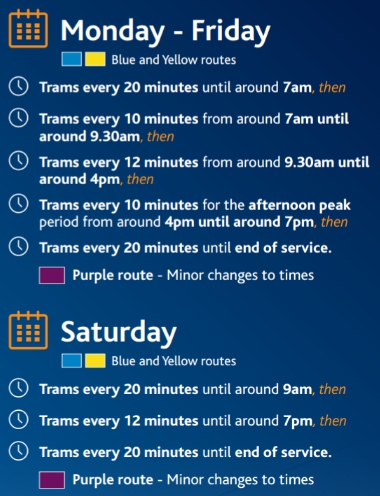 BY REDUCING THE FREQUENCY!

Monday to Friday off-peak and all daytime on Saturday the previous 10 minute headway extends to every 12; harder to remember and longer to wait. Good news indeed.

Yes, it is hard to believe - but the same twaddle is being promulgated by the PTE for whom Stagecoach runs the tram on a contract.

fbb found Supertram on-line, (which no longer has its own web site), after a struggle; but when he searched for news of this change, this appeared. 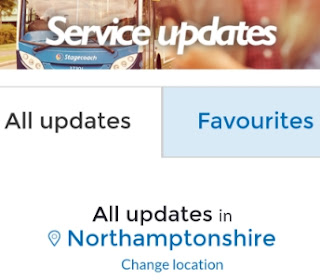 Now that would be a major improvement in the service - all the way to Northampton.

fbb was looking for a quote which had appeared earlier, but had since disappeared from the Stagecoach pages. But, no worry, the PTE prints the quote. 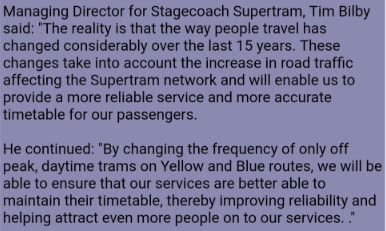 Sure thing buster. Reducing the frequency is a really good way to attract more passengers!

That's where fbb has been going wrong all these years. Fancy not understanding that more people will travel if you run less buses or trams. This should be a major part of any college or university Transport Management course. It is truly revolutionary.

But today (or, more specifically, tonight) is Hallowe'en.

Of course, Hallowe'en used to be about rejecting the devil and all that he stands for. Sadly, commercialism and "letting the kids have a bit of harmless (?) fun" has turned it right round. Hallowe'en now seems to exalt the world of evil and the occult, however lightheartedly.

Why pumpkins? They were originally designed to scare off evil spirits, based on several spooky folk tales. 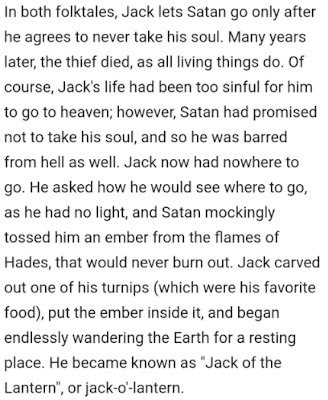 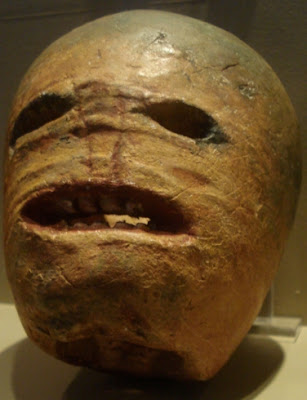 Wouldn't it be more wholesome to use All Hallow's (i.e. Saint's) Eve to do good and kind things for people; November 1st is All Saints Day. Our world needs a few more Saints, surely? Certainly we could do with less horrible things.

From the Bible : Paul's letter to the Church at Philippi : Chapter 4, verse 8.

Next Daventry blog : Wednesday 1st November
Posted by fatbusbloke at 02:00