... News From The Weekend

But, first, a grovelling apology to Stagecoach. A blog or two back, fbb opined hat there was little sign of "Wave" branding on the buses operating service 21. True, but the leaflet for the route is "Wave" branded.

Perhaps shiny new buses in a new "refreshed" wave livery are on their way? How about French film posters? 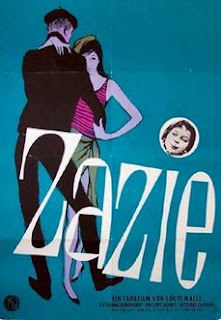 High Peak Does Peaks and Dales
Yesterday, the service between Buxton and Sheffield was taken over completely by High Peak Buses who had been previously running two return trips. T M Travel are no longer involved. Two buses have been painted in a green Peaks and Dales livery, similar in colour (but not design) to the Trans Peak paint scheme. 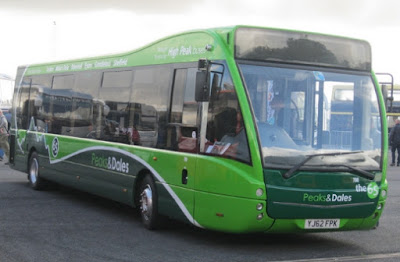 YJ52 FPK used to be with Travel deCourcey of Coventry. 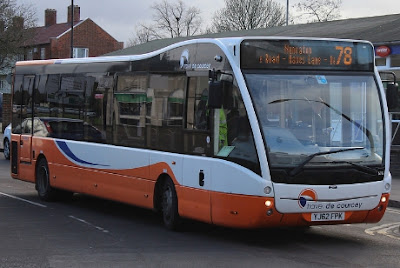 Both dedicated vehicles have been "fettled up" as they say "oop noorth".

The new leaflet arrived at fbb mansions by first class mail on Saturday; unsolicited, but thanks to correspondent Julian.

The timetable is improved, with seven return journeys Monday to Friday, six on Saturdays and three (as previously) on Sunday. (click to enlarge the timetable) 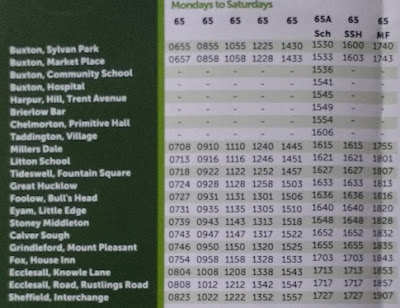 The schoolday variation via Chelmorton and Taddington (65A) is there because the afternoon run of the former service 193 ... 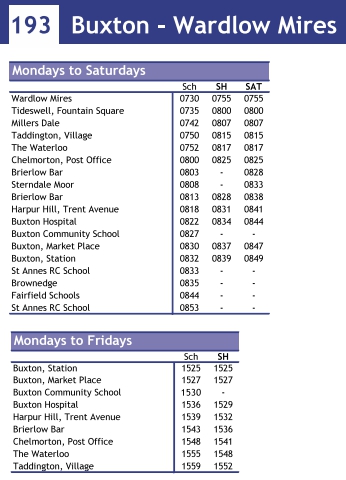 ... is now worked as a diversion of a Sheffield-bound 65. The "to Buxton" schedule has a dedicated inbound tun, still numbered 65A, with both journeys now running only on schooldays. Lets hope passengers travelling in the Sheffield can read the timetable correctly and don't turn up at 1600 when schools are open.

There are details of through fares ... 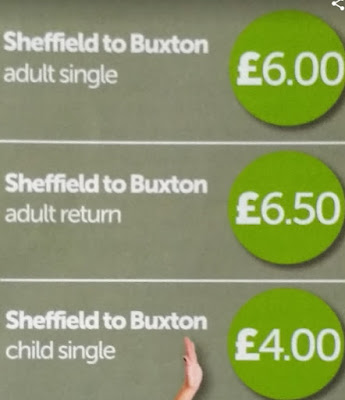 High Peak does now accept Derbyshire Wayfarer tickets on this route, a decision that will bring joy and delight to many a Sheffield resident seeking a superb day out. 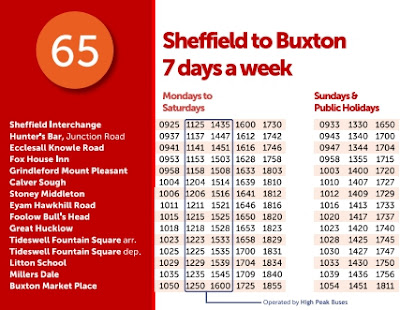 ... although the new information was available as an "update" in a separate part of the site. Someone should have pressed a pre-set button at 2020 on Saturday evening as T M Travel's final journey arrived in Sheffield!

One improvement that could be made to the leaflet would be to have a better map of stops in Buxton. Derbyshire's timetable and High Peak's show the 65 as terminating at Sylvan Park ...

fbb suspects that these are the same place, but thinks (?) that buses pass Buxton Station ... 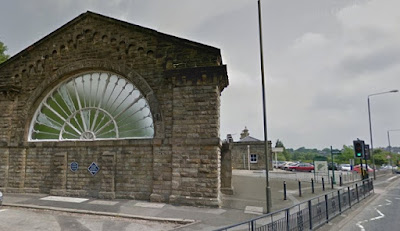 ... and terminate here, on the opposite side of the roundabout from Sylvan Park Car Park. 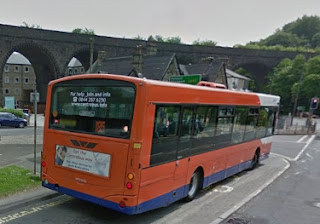 Surely, to encourage tourist usage, the railway station should get a mention somewhere?

Leeds Express Leads The Way
On Saturday last, Stagecoach started its new hourly service from Barnsley to Leeds as featured previously in this blog. Sheffield correspondent Roy was up with the lark and pictured the first ever X10 after it departed from Barnsley bus station at 0700. 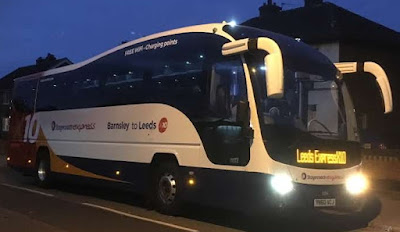 YN60 ACJ used to be a National Express coach. 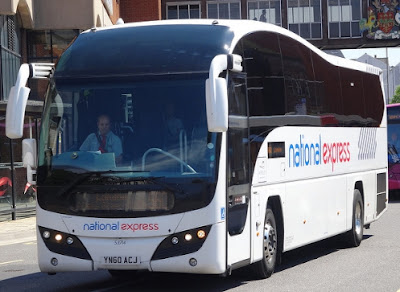 Roy was also in Barnsley to see the 1000 departure and it was a double deck, packed to the rafters. 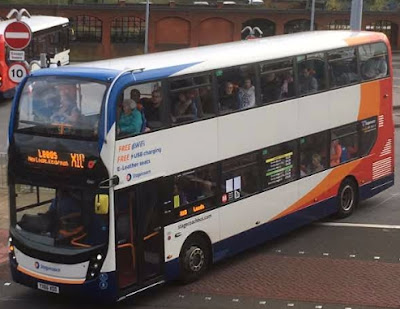 Roy kindly sent a copy of the leaflet which may explain things.

Yep! That explains it!

How joyous it is to see some real supermarket-style promotion of a bus service. Sheffield bus partnership, please note! 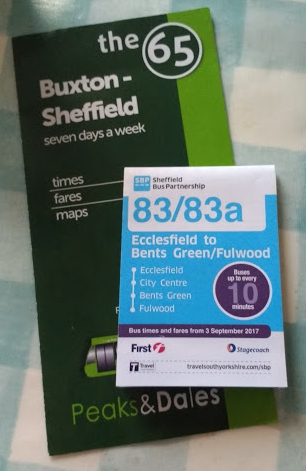 The above feeble mini-leaflet is also produced by Stagecoach!

And Then There's First Bus
This weekend was due to see the final and for ever closure of Exeter Bus Station.

Oh yes it was
Oh no it wasn't

But the pantomime continued and the bus station will remain open until ...

Arrangements had been published, revised services registered, bus stops and shelters installed on nearby streets and everything was ready. Then, of course, everything was un-registered.

One of the new registrations was for a change to First's pathetic X52 from Lyme Regis to Exeter. This was to be extended from the old terminus to Exeter St Davids railway station. 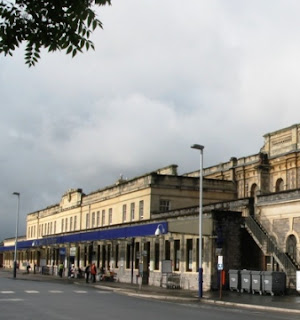 The general buzz from bus watchers was that this, too, would not change and would continue to terminate at the Bus Station.

Oh yes it will
Oh no it won't

Go to the horse's mouth, says fbb. So off whizzes an email to First Bus in Dorset And Lots Of Other Places. "Please send your new timetable for the X52"

A reply came from Norwich (an obscure corner of Dorset?), by post (haven't these Norwich folk heard of e-mail?). 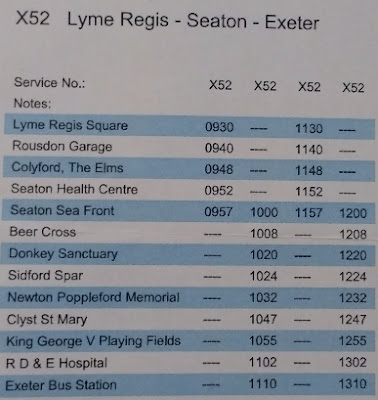 It was the old timetable. There was no explanation, no comment like "we're not changing", just a sheet of printout in an envelope.

What did it mean? fbb guessed that Norwich hadn't got a clue what was happening in Lyme Regis, but the First web site showed no sign of the previously announced change. So was it or wasn't it?

"Well," thought fbb, "we had better UN-change GoTimetable Seaton" - which was showing both the old and the new tables, the latter courtesy of Traveline as nowt was revealed c/o First.

So on Friday last fbb returned to First Bus in Dorset And Lots Of Other Places. And, sim-salabim, abracadara, etc, there was the new timetable. 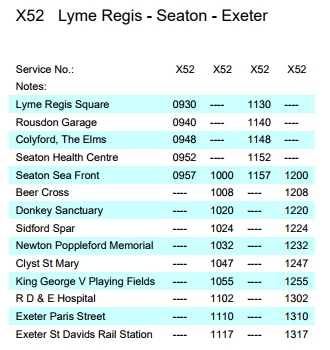 Will the X52 stop in Paris Street (outside the bus station) from today? Who knows? Who cares?

Bit it IS all happening - or is it?

Which bus company knows how to communicate with its customers?
First Bus? - not at all
High Peak? - pretty well
Stagecoach? - a mixed blessing?