We Could Have Gone by Train : Part 2

Stand at the northern end of Barnstaple Station  and there is nothing to see except the station car park and the more recent road network. 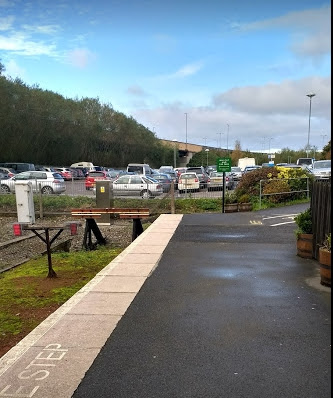 But once upon a time there was a railway junction. Bear right and cross the River Taw and you were on your way to Ilfracombe ... 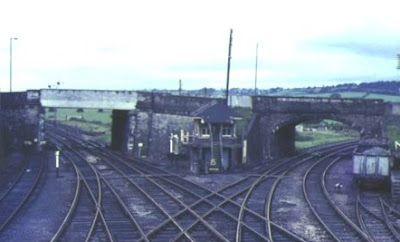 ... bear left and the route takes you to Bideford. The bridges and the road over them have all gone, being replaced by a super junction linking to the spectacular Taw Bridge ... 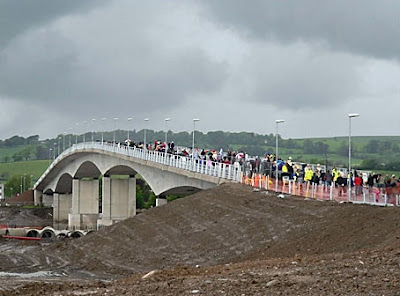 ... seen above just before opening when pedestrians were invited to cross.

One on-line source refers to the bridge at the far end of the car park as being built to allow the possible re-opening of the line to Bideford. 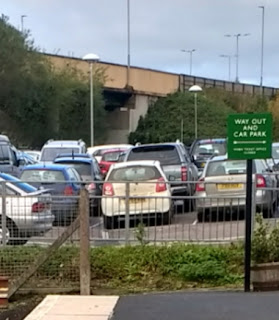 This seems highly unlikely (station bottom right) as the "next road round" the roundabout has no underbridge ... 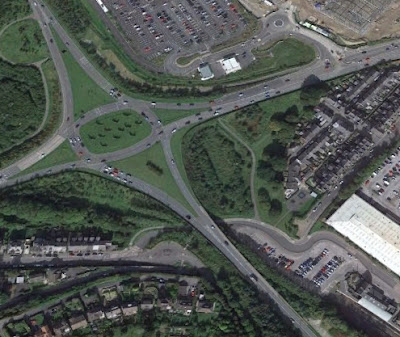 ... and cyclists seeking to traverse the Tarka Trail have a somewhat circuitous expedition to rejoin their route along the former branch (blue sign). 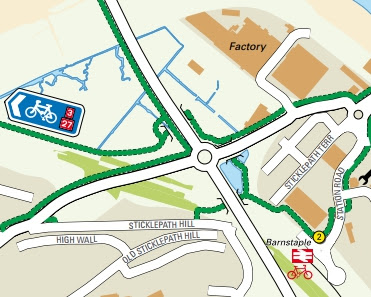 The first station along the line was Fremington. 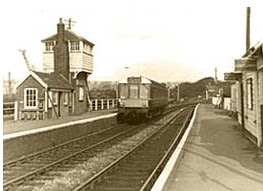 A distinctive feature was the tall signalbox, but the community's fame was in its quay. 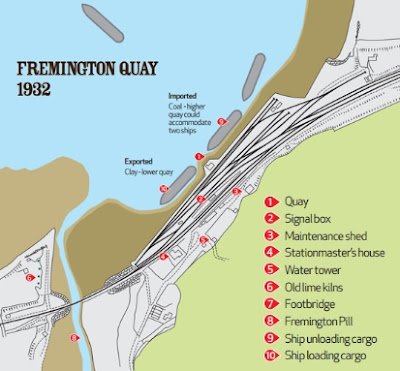 It claimed to be the biggest docks facility between Bristol and Cornwall, importing coal, building materials and general goods and exporting ball cay from quarries near Torrington. 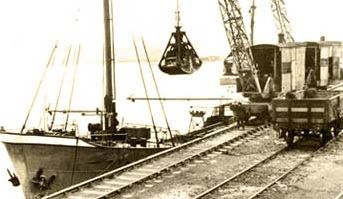 Freight continued until well after passenger services were withdrawn.

The station has been re-created and serves as a superb cafe and visitor centre ... ... with a re-imagining of that tall signal box.

Next along the line, travelling west, was East Yelland Power Station. 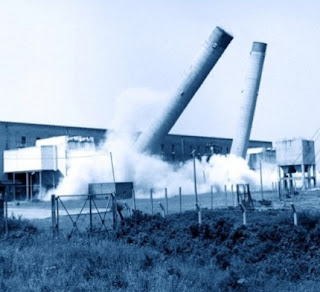 ... it had both rail and sea connections. 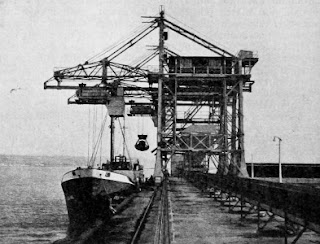 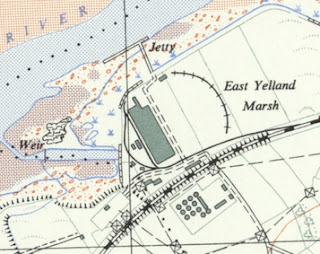 Next the line curves southwest to get to Instow. 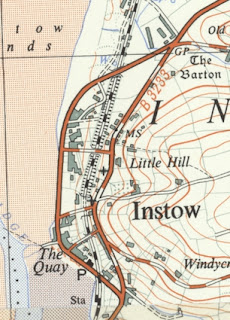 Here are preserved a length of track, a rusty signal or two ... 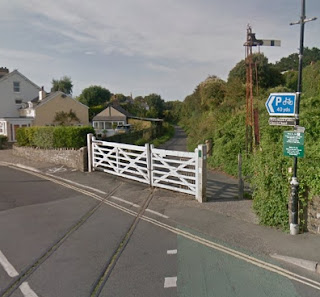 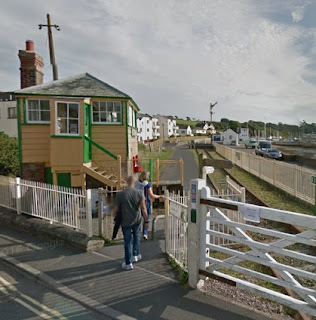 The station building (below, upper right) ... 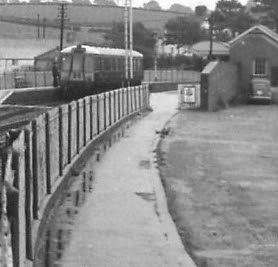 ... has lost its canopy but still stands in the ownership of the local yacht club. 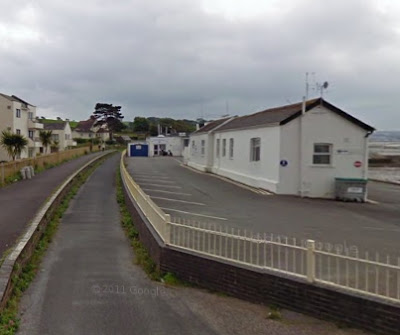 And so to Bideford. When originally opened the line stopped short of the town at Cross Parks as shown in this ancient engraving. 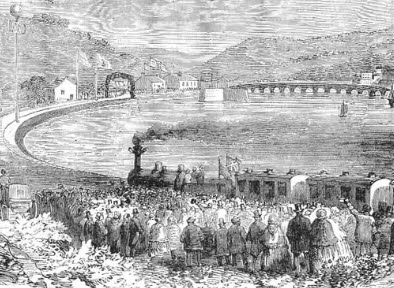 Later it was extended to a more convenient location nearer to the Town Bridge ... 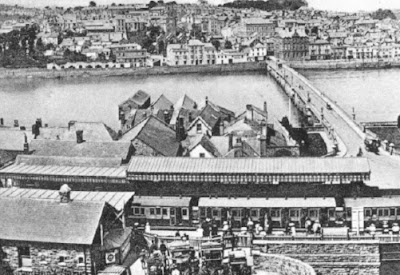 ... but actually in the community of East-the-Water. 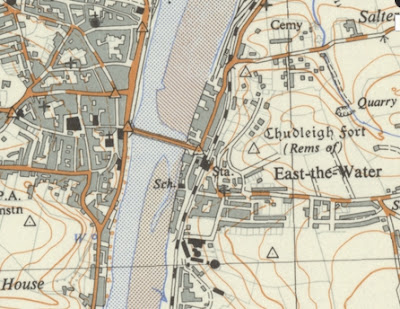 The line continued south to Torrington.

The bits and pieces at Instow are under the care of the Bideford Railway Heritage Centre which has a collection of rolling stock and a small diesel loco at Bideford Station. 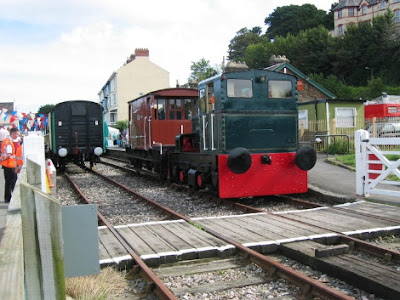 Of interest is that the town's Royal Hotel had an entrance direct on to the station platform for the benefit of rail-borne passengers. 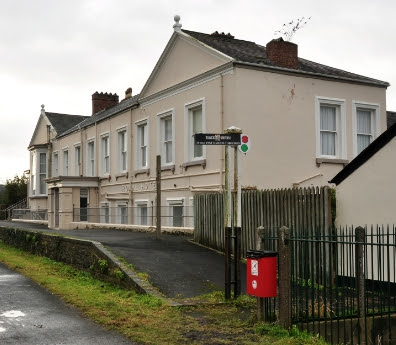 Recent history provided a particular burst of fame for the line and the bit of the Tarka Train between Bideford and Barnstaple. It was the site of James May's "Great Train Race" when an OO loco ran all the way between the two. 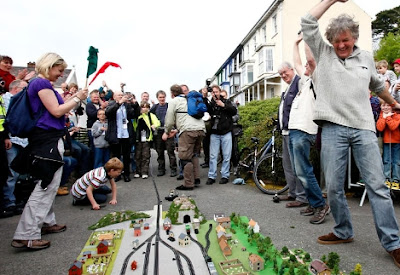 Buffers Model Shop (at Colston Cross, near Axminster) was very much involved in the project ... 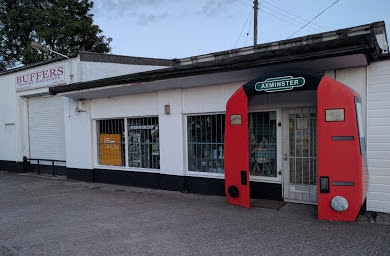 ... and the model loco which completed the trip is still "preserved" (and still working!) in the shop.

Thus it would have been possible around 60 years ago for an fbb-and-Mrs clone to get to Instow from Seaton by train all the way.

Unfortunately, your chubby blogger does not have a suitable rail timetable, so cannot work out how long it would have taken. (Any offers out there?) By car the single journey took 1 hour and 45 minutes!

There may not be much working railway beyond Barnstaple, but there is certainly plenty to explore. Still to be researched, Barnstaple to Ilfracombe and Bideford to Westward Ho! and Appledore.

Next newsworthy blog : Monday 30th October
Posted by fatbusbloke at 02:00