Sheffield University has a Cunning Plan to link the once-separated Engineering Departments on Mappin Street with the rest of the site which straddles the busy Western Bank. (see yesterday's blog). They are calling it a "gold route".

It will start at the Arts Tower(left) ... ... thrrough a new garden areas on the line of the former Winter Street. New pedestrian crossings are being created on Western Bank with mega road works happening at the moment. 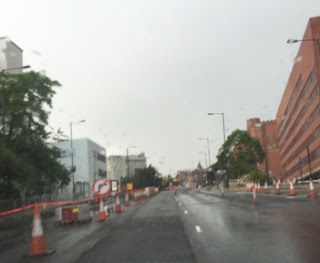 No buses now travel towards city via Western Bank, so the bus lane has been removed and the road lanes are being shuffled to give wider pavements as well as the new crossings. Quite what effect all this will have on Sheffield's peak hour traffic is unclear but there are those who wonder why students cannot trot a few yards up the road and use the massive underbridge. 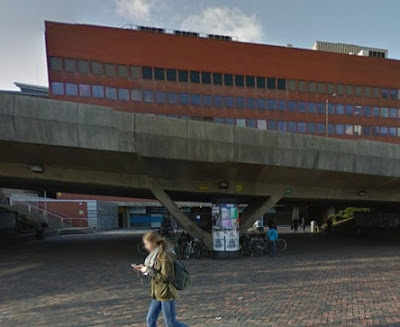 When fbb was being academic (?) students simply walked across the road, largely oblivious to passing traffic! But there was less of them and less of it back in the early 60s.

The next part of the "gold" route is via a pedestrianised Leavygreave Road (or is it Leavy Greave Road?)

at junction with Hounsfield Road

at junction with Upper Hanover Street
. 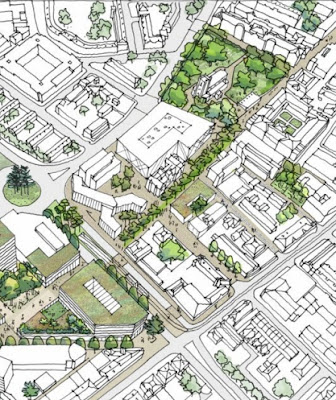 The route is marked by the line of trees running from centre left to the former graveyard at St Georges Church, itself now re-fettled as a lecture theatre. A bigger crossing is planned to avoid trams and buses on Upper Hanover Street. 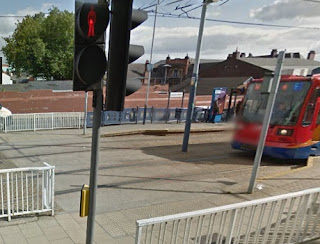 Then a rather seedy route today ... 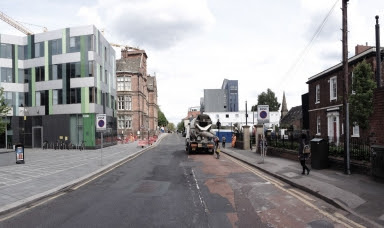 ... will eventually achieve "gold" status under this £8 million mega plan. 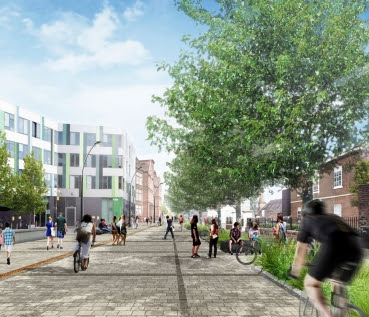 Just as an aside, a bit of personal nostalgia. All three of fbb's sons were born in the Jessop Hospital for Women, the scanty remains of which are the red brick building beyond the modern "thing" on the left.

Time for an fbb map! Please note, we are only looking at bus routes TO the city centre; if you read yesterday's blog assiduously, you will remember that routes FROM the city are all unchanged. 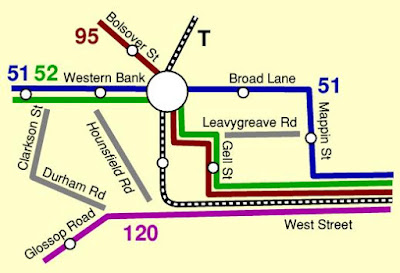 In 1967 inbound 52s and 95s were diverted via Leavygreave Road and Gell Street to ease traffic flow at the junction of Upper Hanover Street and Glossop Road, where left hand turns were banned. 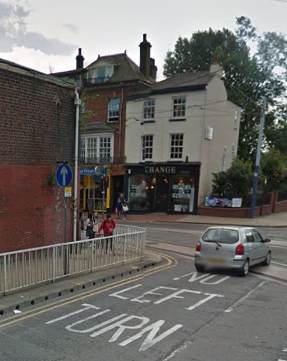 Nearly thirty years later, this decision made it easy for the tram to make the tight turn! Thus it is that the desire to close Leavygreave Road and the bonus of losing buses and a bus lane on Western Bank lead to a significant rejig of city-bound routes. 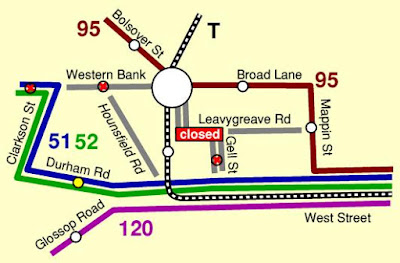 For service 95, the change involves no infrastructure  work. Buses use Broad Lane and then turn right ... 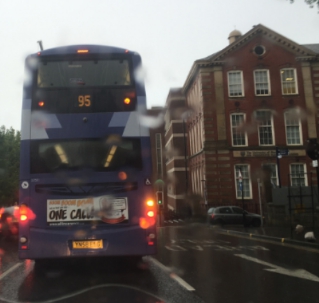 ... into Mappin Street and along past the Engineering Departments ... 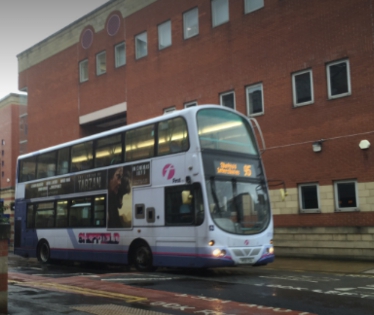 ... too rejoin their former route via West Street.

Travel South Yorkshire, the publicity arm of the PTE, has provided an update. (staggers in amazement) Here is the on-line leaflet route map ... 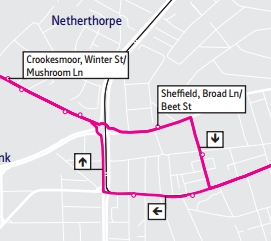 ... which doesn't mention Mappin Street; and the ill-defined list of stopping points which does. 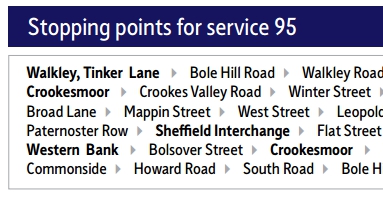 Before we rush to congratulate the PTE on its prompt updating, please note that the new non-leaflet is dated ... 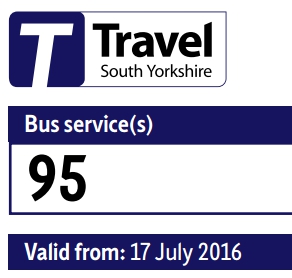 ... 17th July, over one month after the change. The leaflet is actually to herald a school summer holiday service reduction and the route change appears co-incidentally.

Needless to say, the full Sheffield route map remains (a) wrong cartographically and (b) not updated. 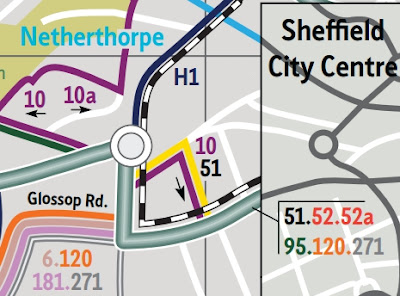 He/she who drew this has clearly neither understood the road layout or bothered to double check what happens "for real" on a map. The road layout at the Brook Hill roundabout is just a joke.

Again, the PTE pays fat wedges of money to purchase these maps from a contractor.

Equally unsurprising is that the journey planner, part of the dubious Traveline, is also not updated ... 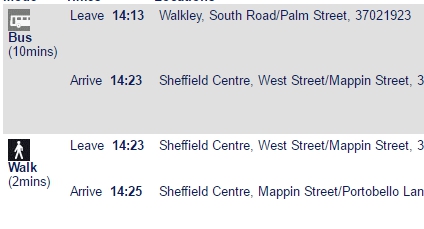 It asks you to walk from a stop on West Street not now served by the 95. 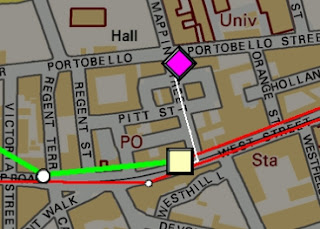 Why is it not updated? Has the timetable change come as a big surprise to the PTE?

It never ceases to amaze the old man that an organisation with huge resources; staff, technical and financial, cannot be bothered to keep its stuff up to date. It takes a matter of minutes to amend maps and hardly any time at all to input a timetable change into a well designed Journey Planner database.

Perhaps that is the problem?

Never mind, things are generally much worse with the 51 and 52.

As will be revealed tomorrow.