It transpires that Travel South Yorkshire, despite having huge plush and very modern offices bang in the centre of Sheffield (and close to all central bus stops!), have very real difficulties in working out where their buses go.
Indeed a man from Stagecoach who DOES know where HIS buses go has recently asked TSY to get their route information right.   The nice man from Stagecoach was promised that it would all be corrected with the next issue of the relevant leaflet.   And so ...

... we have the NEW leaflet for the revised 88 and 88A.
Except that the 88 and the 88A both terminate at Bents Green and NOT Banner Cross - indeed the 88A does not go NEAR Banner Cross! 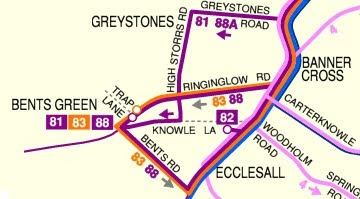 High Storrs School is at the "H" of High Storrs Road, by the way, clearly on BOTH routes!
And the fun (or is it fantasy) continues at the other end of the route, at Ecclesfield.
Some buses start from Mill Road and are then timed at Morrisons 4 minutes later; quite straightforward.   But what about the bus that starts at 0610 from, er, Morrisons and four minutes later manages to get to, er (again), Morrisons!   Indeed most daytime buses seem to perform this 4 minute trundle round the supermarket car park; wasting fuel and confusing potential passengers.   Of course there is an explanation - seemingly hidden in the Travel South Yorkshire sea of oblivion!

Again an fbb map explains all 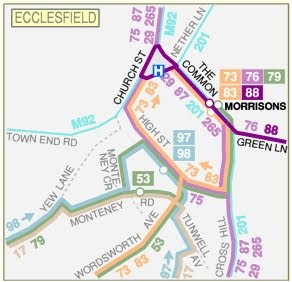 The 88 arrives via Shiregreen Estate, stops at Morrisons and then proceeds to turn at the triangle of roads at the top of the map, calling at the Health Centre (The "H" on the map) on Mill Road as it does so.  So ALL the 88s stop at the Health Centre, not just a selected few, and then they travel south again calling at Morrisons.   So from a passenger's point of view the "terminus" is Ecclesfield Health Centre and NOT Morrisons.
So why have SYT got it so wrong?   POSSIBLY because they blindly use data from Stagecoach's "working timetables" - for company reference only - which only records some buses at the Health Centre, namely those that start their day's work there.
And possibly because they don't think about what the passenger needs to know, or, worryingly, because the folk in the posh office block simply DO NOT KNOW where the buses go.   Maybe they should buy a day rover and have a look.
Posted by fatbusbloke at 17:50