fbb and THOSE maps?

Here's how I created an enormous and fully comprehensive map of Sheffield's bus and tram network.

It all began when a chum of mine decided to write a book.   It would have been what the trade calls a "slim volume", unlikely to win the Booker prize and even less likely to achieve sales of, say, dozens.   The title of this magnum opus?   "Sheffield Transport in 1960."   Not a title to encourage the book buying public into instant salivation!
Anyway, the budding author wanted a map of Sheffield bus and tram routes in 1960 - so fbb decided to have a go.   Herewith an extract: note the pecked line showing that, at least until October 1960, trams still trundled through some of the city's streets. 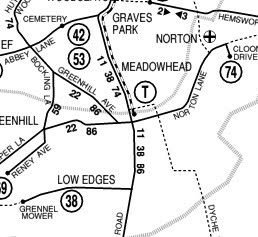 It is loosely based on a Sheffield Transport production, first published in 1962.  (But using an older pre WW2 map as a guide.)  The full 1960 map can be viewed HERE (pdf).
Then I got to thinking ...
Would it be possible to draw a similar map for 2010, 50 years after trams disappeared - not finally as it happened, they came back! - from the steel city's highways and byways.
The network is hugely more complicated; competition between Stagecoach and Worst Bus is increasing and loads more bits of Sheffield have been built on.  Coloured lines were essential but a separate colour for each route would need a map the size of, possibly, Sheffield.   So this one... 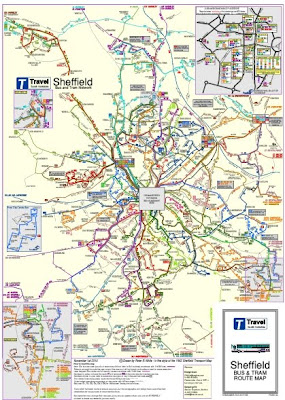 ... uses colours for GROUPS of routes serving associated areas of the City.   It seems to work; but user comments would be very much appreciated.   Here is a similar extract to the 1960 version above:- 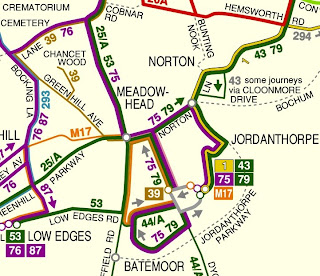 For the "hairies" the whole map can be viewed HERE (pdf).
Can hard copies be purchased?   Not yet, it needs commercial sponsorship and there may be copyright issues to deal with; so this a both a fun thing (is the man insane?) and a sample for possible development.
In case you were embarrassed to ask - yes it is completely up to date.  It includes the service changes from Sunday 31st October and Monday 1st November.