Fat bus bloke's latest trip on Saturday 24th July was (with Mrs fbb) to a chum's wedding in Bristol.   0923 from Portsmouth Harbour allowing a hour or so in Brizzle for lunch and a spot of window shopping.   Then a short bus ride to Cotham parish church - service 9, every 12 minutes. 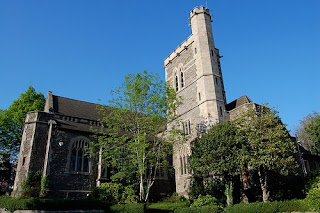 On arrival at the Harbour there was an ominous lack of amber "doors open" lights on the First Great Western 3 car 158 unit.   There was an equally ominous gaggle of railway employees in the driver's cab area.  Then, with doors still locked and about three minutes before advertised departure, a man with screwdrivers walked past waiting passengers - off to where the station's announcements are electronically "created".   And, yes you've guessed, the train was cancelled.

Accidents do happen, and in this case the doors weren't working - and, for all sorts of reasons, non-working doors are bad news if you intend to carry passengers, at least, non-working power operated doors are very bad news!  [of course, not a problem with good old slam-door stock!]. 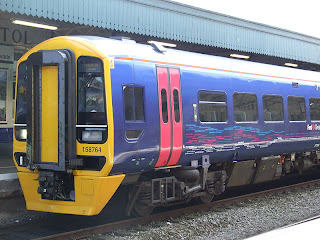 But several questions need to be asked.

1.  Why was no advice given on alternative travel opportunities.   It was possible, though involving two changes, to catch up with the Brighton to Bristol train and mitigate some of the delay.  [Indeed, fat bus bloke considered this, but, with plenty of slack in the schedule, decided to wait with the other hapless passengers for an hour.]

2.  Why was no practical apology offered?   Pre-recorded words alone are meaningless, nay insulting, and a free cup of coffee would have been nice.

3.  Why did the next train (0952 arrival at the Harbour) keep its doors resolutely locked until 1020, jut 3 minutes before departure, with its staff disappearing (hiding?) in mysterious parts of the station?   Portsmouth Harbour station is OK, but an hour on perforated metal benches is not an ideal comfort facility for the elderly! 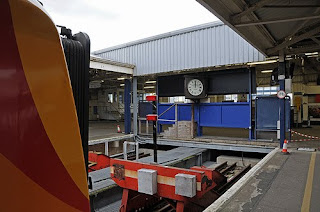 4. What was there totally ineffective air conditioning in Coach "C" on the 1023?   At least the guard was able to open the windows.

5. Why was there no water in the toilets of the 1023?   There are filler hoses on the platform and 30 minutes "layover" would seem more than adequate for Toilet Tank Topping-up Time.  I expect Stageocach charge too much, so First can't afford a tank of precious Stagecoach H2O.  [Stagecoach, disguised as South West Trains, are the "operators" of Portsmouth Harbour Station.]

6. Why was the refreshment trolley removed at Salisbury leaving 3/4 of the journey unrefreshable?

7. With Portsmouth being a long way from First Great Western back-up, why wasn't there a reserve train available.   There were plenty of suitable units lying idle at Salisbury, but, of course, they belong to Stagecoach, not First.  Thee boos for privatisation!

8. And, while in g.o.m.* mode - why were the ladies toilets on the station so utterly disgusting? [locks missing, dilapidated and smelly - as advised by Mrs fbb!]

To put it simply, management of the problems was inadequate.   No, more simply, THERE WAS NO MANAGEMENT.

Tickets; unchecked at any point on the journey....

What a lottery - and we lost!   One minor consolation - we bought cheap fares!