It seemed simple enough.
I needed to be at Nuneaton at about 12 noon and to leave at about 1600 to see a man about a pension.  My journey was starting from Portsmouth.
The "National Rail" journey planner has recently been "improved"; i.e. made more confusing and difficult to use with lots of twiddly bits and advertisements to trap and befuddle the unwary.   After wrestling with buttons and boxes for a good few minutes, I was offered journeys via Southampton and Coventry for about £80 return. [please note, fares quoted are with a Senior Railcard!]
Now, I have nothing against Deutsche Bahn - soon to be owners of Arriva and thus the Cross Country train company - but I find their Voyager trains uncomfortable and claustrophobic. 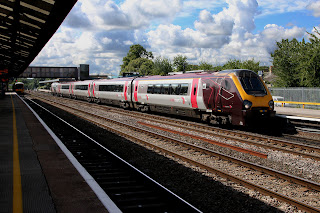 What about going via London?   Roughly the same price with a change at Coventry.
But could I improve on £80?
Leaving Euston at 1046 on London Midland's train direct to Nuneaton (arrive 1216) would work - IF I could get to Euston on time. 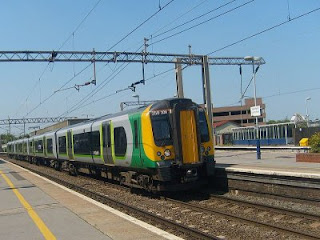 Moreover the class 350 "Desiro" train is more comfortable, better views through bigger windows; less oppressive and likely to be much less crowded.
Initially, restrictions on the Old Fogey card gave an arrival at Waterloo at 1013.   Hmm, a bit tight.   But I could leave Portsmouth earlier, go the long way round via Basingstoke and arrive in Waterloo at 1008; giving a vital few minutes extra to cross the Metropolis.
Journeys and fares were then re-searched and purchased as follows:
£26.85  One day travelcard Portsmouth to London including Underground  (yes, I COULD have crossed London by bus for nowt; but a bit risky if traffic was bad)
£3.95    Advance Single London to Nuneaton
£5.95    Advance single Nuneaton to London.  (The £3.95 fare ran out as I tried to click!)
£2.00   Rip-off postage on the cheap London Midland Fares
£38.75  TOTAL - a considerable improvement on £80!!
Now, in order to get this better value, I needed information which is well-nigh impossible to find on-line.  I needed to understand the detailed availability rules for the Senior Railcard (based on arrival times, not departures); I needed to understand permissable route details for trains between Portsmouth and London; I needed to know about the through trains from London to Nuneaton, seemingly ignored by journey planners; and I needed to guess that there might be "silly" fares on London Midland services.  I also needed to know that a one day travelcard is cheaper than cash fares, even for simply crossing London, because Boris wants all to use "Oyster" and punishes us if we don't!
Does it really have to be like this?  And how many people pay up, assuming that the web site will always offer the cheapest fares?
Posted by fatbusbloke at 12:05