When a plan comes together.


Hannibal Smith in "the A team"!
Getting from the Isle of Wight to Watford (Herts, not Gap) is easy logisitcally but a challenge financially.  A while ago a leaflet was produced by the Mayor of London explaining the intricacies of "Oyster" fares to Watford. It was as understandable as one of Gordon Brown's speeches on the economy but rewritten in Sanskrit. The problem is simply that Watford Junction station is not in the London Travelcard area - so the solution is .....  [don't bother to ask.]
So the journey TO Watford was tedious, involving Travelcard on the Bakerslow Line to Harrow & Wealdstone and rebooking there to Watford Junction. But the return was cool, amazing, groovy (or any other outdated word of approbation). 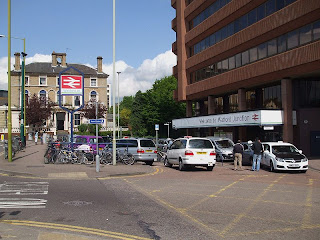 1616 from Watford Junction to Euston, stopping at Harrow & Wealdstone (thus picking up Travel Card validity) with an arrival in Euston at 1636 - pretty nippy.
Now Mrs fbb and myself are not in what you might call "the bloom of youth" and the days of running for trains have long gone, replaced by a slightly faster amble and much perspiration. Festina lente (as they say - no, "said" - in Rome).   Our schedule allowed plenty of time for crossing London to catch the 1730 from Waterloo. 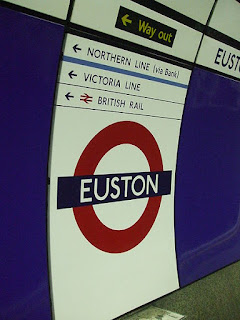 But a Northern Line train was waiting for us on the platform at Euston and thus we found ourselves on the Waterloo concourse at 1657. 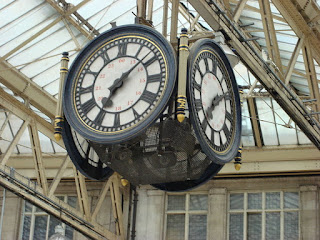 Despite nearly getting on the wrong train (to Portsmouth Harbour via Basingstoke, leaving from the adjacent platform in a cunning plan to confuse us) we joined the 1700 just in time for a lively "ting ting" and away.  [for the purists: modern trains don't "ting ting", they electronically "beep beep" - but "ting ting" sounds more poetic!]
Ferry connections were leisurely but slick and so we were back home drinking a much needed flagon of tea at 1920 almost exactly 3 hours after leaving Watford.
It cost the two of us less than the price of the car on the ferry and, apart from a little "glowing" and wheezing at Waterloo, involved very little stress and (as is required by today's environmentally aware world) was significantly "greener".
Don't you just love it when a plan comes together? But it is VERY HARD WORK to sort out the options and achieve fulfillment. Does it need to be this complicated?
Posted by fatbusbloke at 08:13