from Kilmington, Devon
link will appear (here) at approx 1015 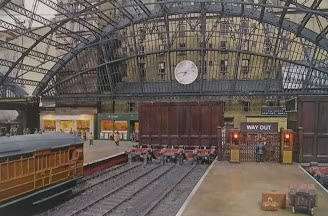 ... but, at first glance, it looks like an old snap of the concourse behind the North Western Hotel and crowned with the overall roof of the station's northern train shed. 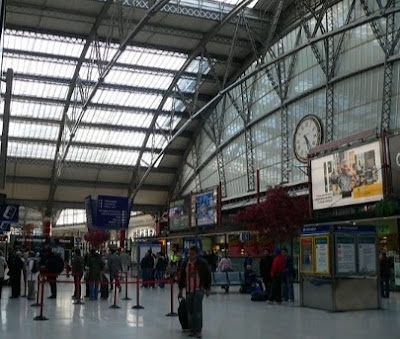 The end "wall" has been reglazed with milky glass in this modern view of the same area.

On the approaches to the station was a large signalbox ... 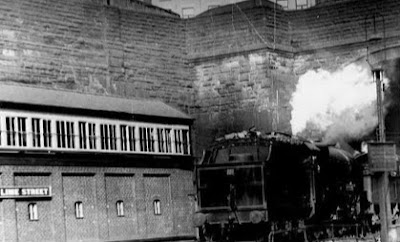 ... and here it is again from a slightly different angle. 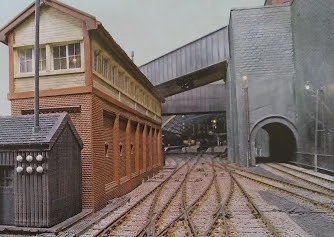 We have already seen some modern pictures of the Edge Hill cutting ... 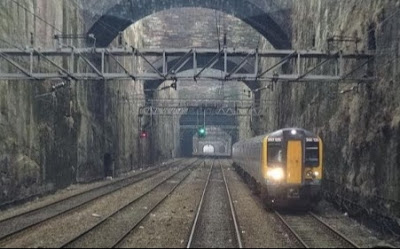 ... but here is one from the immediate post-war period ... 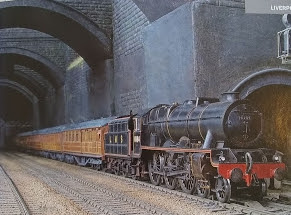 ... with LNER "teak" coaches hauled by a LMS locomotive in the period just after  nationalisation.

Of course, it's a model - an EM** gauge re-creation of Lime Street station, built with astounding accuracy.

Modelling of this standard puts fbb's puny efforts in his back yard to shame.

The layout was featured as "Railway Of the Month" in the May edition of Railway Modeller magazine. For a full appreciation of the model and what lies behind its creation, you would need to beg, borrow or buy a copy and read the full article.

Needless to say, more than one modeller has had a hand in its creation. The central figure in the construction is one John Holden who began with a Triang trainset at the age of 8, but four other modellers have been involved in the project.

A gent called Les Green built the North Western Hotel, designing many of the parts on his computer and then having them etched or laser-printed. Then came the challenge of assembling what was. effectively, a huge 3D jigsaw!

But the result is spectacular. 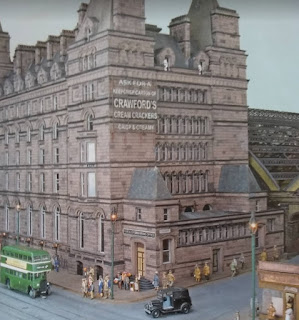 The bus is a 1/76 model of a Liverpool Corporation vehicle and gives some idea of how big the hotel and the model are.  Compare bus with tram in this old postcard print! 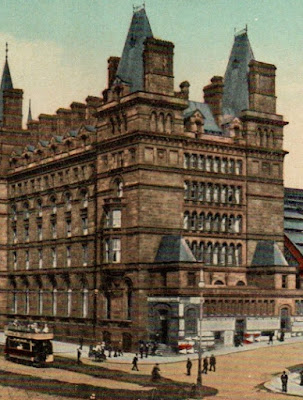 The article is written as an interview with John Holden. When Mr H was aasked how long it had taken to build the layout, he replied ...

Hey-ho! Perhaps fbb is not doing so bad for a first effort started in his twilight years. Maybe if he lives to 115 he might improve just a tad. He would also need a substantial injection of funds into his bank balance and a move to a much larger property that his delightful cupboard in Seaton!

**EM gauge? OO gauge is 16.5mm, actually too narrow for accurately modelling UK's standard gauge track. EM has a gauge of just over 18mm making it an exct scale for 4"8½". Of course that means that all the pointwork has been hand made!

You just have to admire the skill, dedication and pocket-depth of these folk.

Thanks for some inspirational work - fbb will now go and look at his layout and weep pathetically at his lack of ability, money and dedication.

But hey! Old chubby chops enjoys himself, possibly as much as the team behind Lime Street in miniature. 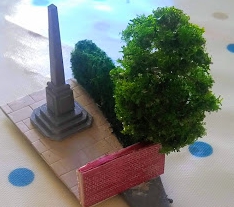 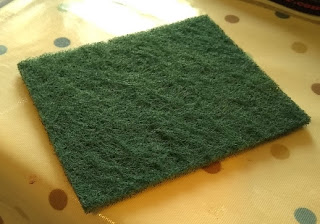 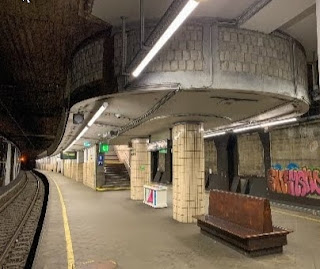 In 1958 construction started on the Brussels Cité Administrative de lÉtat, a set of buildings designed to accomodate all of Belgiums's government departments.

The whole caboodle took 27 years to build and could accommodate 14000 civil servants. 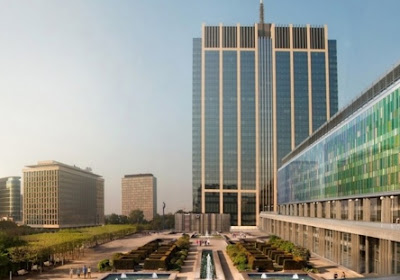 It doesn't look that good from street level ... 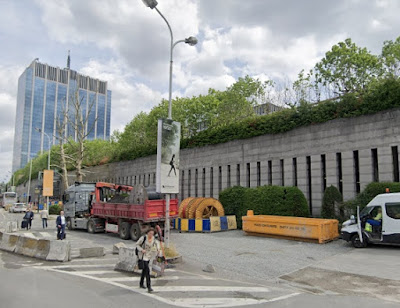 ... because there is an awful lot of car park. The greenery is a massive roof garden with water features, sadly invisible to passers by!

The station has a grand and imposing entrance ... 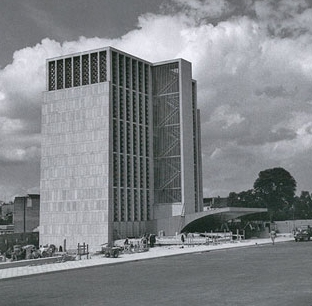 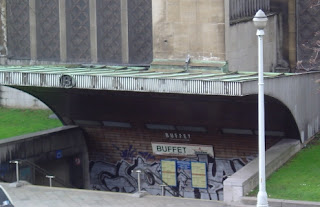 The station below is Bruxelles Congres.

But for a whole raft of reasons is never really attracted the passengers that were expected. Here it is at peak times today. 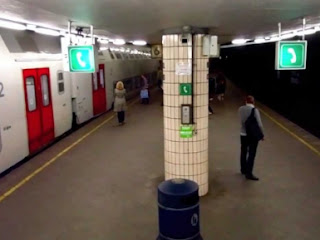 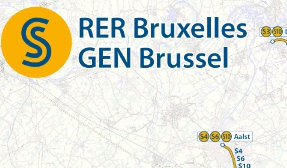 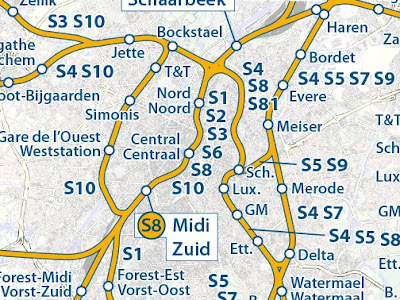 It is carefully hidden between Nord and Centrale.

Since 2002 it has become an unstaffed halt with a poor service.

There have been proposals to close it! 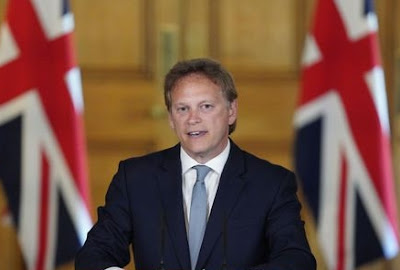 ... who was "happy" to announce funding to enable bus and tram services to increase frequencies from "as soon as is practicable". 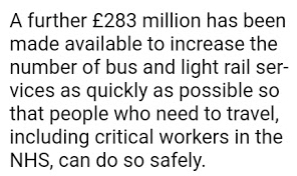 "Safely" means travelling with social distancing restrictions in force, already implemented in many areas as we have seen. 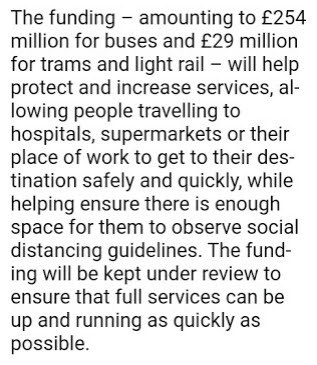 "Quickly" does, however, depend on how many "bus full" destinations whizz past!

Without the money, many bus operators would simply not be able to operate buses; and might well have had to join Shearings etc in having to throw in the towel! 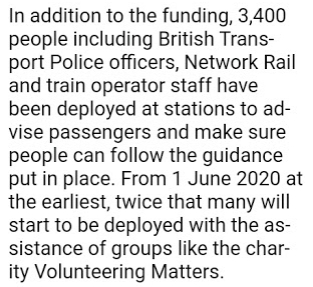 This sounds like a social distancing force of gauleiters each equipped with a 2 metre stick with a sharp point or, for busy stops, a cattle prod on the end.

fbb looks forward to meeting those deployed at the passengers hot spot of  The Underfleet, Seaton. 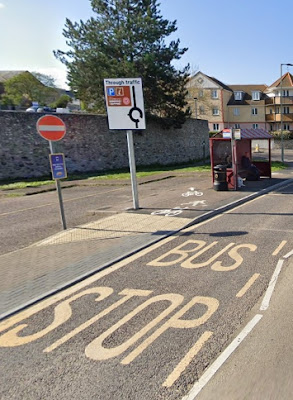 Feline Forays Facilitated!
At last Mr Tubbles has grasped the fbb mansions cat flap technology. Until a few days ago he would enter via the flappy thing, but egress was "by request" to door staff who, of course, were required to be on duty 24/7 to open the big flap next to the little flap.

But the cat has, at long last, grasped the fact the the small flap has two-way technology and his ample posterior can now be seen disappearing from lounge to back yard without the involvement of his hard-pressed staff team. 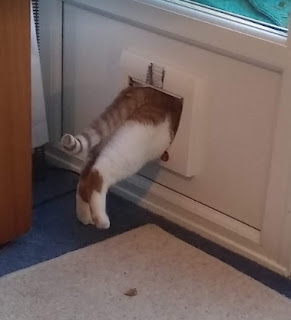 No animals were injured in this demonstration!

Next Bank Holiday quiz blog : Monday 25th May
Posted by fatbusbloke at 02:00