Good News But Not Quite (3)

On Monday of this week the people of Todwick, east of Sheffield ... 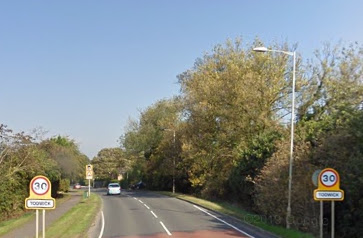 ... were beneficently bestowed the benefits of a bus service every hour into Sheffield. They had lost their hourly X54 and occasional X55 services at the start of the virus cutbacks. From Monday their buses would run via Kiveton Park and Wales to Swallownest then fast (ish) into the city. The X54 had run a somewhat more convoluted route and took 44 minutes. The X5 variant takes 36 minutes and continues to the Hallasmshire Hospital and Broomhill BUT, this generosity of scheduling only runs on Mondays to Fridays. 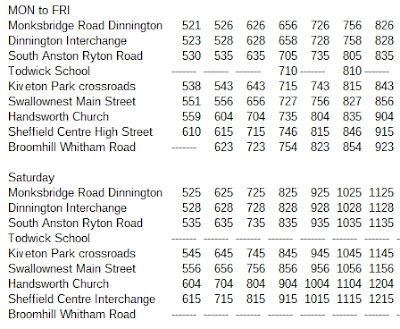 So comes the big question; how would Mrs Miggins, happily resident in her neat little bungalow in "The Pastures" ... 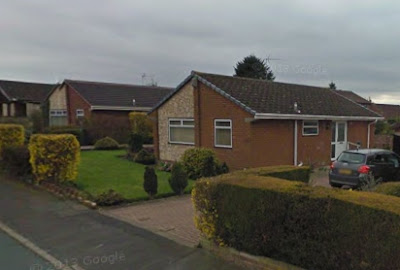 ... find out about this new service, operated by First. How would she know that it was now possible to get to her appointment at the Hallamshire Hospital using one direct bus journey?

First Bus (1)
fbb received a Chinese whisper (from a St*g*c**ch employee) on Wednesday 8th May informing him that First Bus changers were expected from Monday 11th. A quick look at first's web site revealed this:-

A full list of the changes also appeared and was both accurate (nearly, 95/95a is missing from the list) and helpful, as per the example below.

For most of the time (ALL of the time on their emergency timetables) 81s run to Dore and 82s run to Millhouses; so fbb is not sure why the text implies that both run to both.

83 Ecclesfield - Sheffield - Bents Green (buses run via Greystones, the important bit of information not revealed) Monday to Sunday daytime service will operate hourly. Extra hourly service from Sheffield to High Storrs  only (that's the same as Bents Green and still via Greystones). Combined 30 from City.

But here's a map to help. fbb has moved the label for Greystones because the PTE map has it in the wrong place! 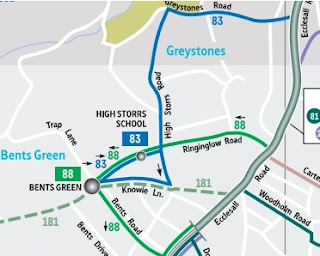 But we are hoping for timetables.

So when fbb clicked the link to the new timetables, notably the X5 via Todwick, he was taken swiftly and electronically to the old ones.

On Thursday morning, fbb received the timetables from his very helpful chappie at First and started processing.

Not a dickybird until Sunday Morning when text notes appeared on the PTEs long list of temporary virus arrangements. 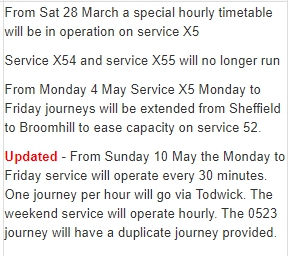 Later a timetable appeared but fbb is not sure when. 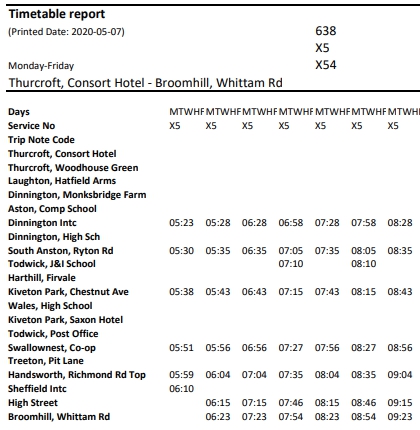 First Bus (2)
Meanwhile, back at First, by Thursday morning enquirers were getting stuff like this ...

Unfortunately the search term specified (X5) cannot be found in our database. Please amend your search or view all timetable listings for South Yorkshire.

We are experiencing problems serving our timetables at the moment. Until we get this resolved, you can call Traveline on 0871 200 22 33 or visit www.traveline.info

Their web site was well and truly busted. So no timetables there.

They did finally appear on Monday morning, the same day that the service changed - better than nothing but disappointing and frustrating for all involved - including, fbb suspects, the hard working chaps and chapesses who drew up the improved schedules. 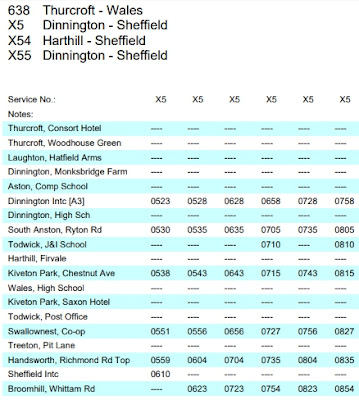 Such is the joy and delight of large unwieldy web sites (note cancelled 638, X54, X54 in the heading and timetable layout above) designed up by people who don't run the buses - or travel on them. It would be so much easier to get the lad, Gavin, to do it on a simple timetable site, uncluttered with adverts and Covid Advice, from a desk at Olive Grove depot a k a East Bank bus garage.

And as for recommennding Traveline ...

The correct number for Traveline in South Yorkshire is ...

Traveline On Line
What would you find, then, if you took up the suggestion above, say for the X5 via Todwick? 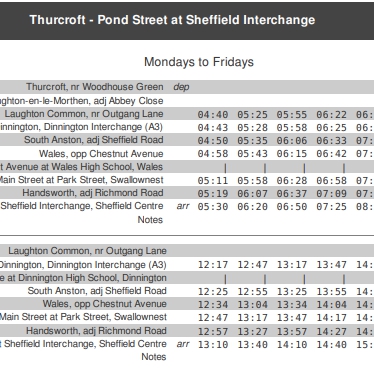 Yep, you guessed it - the old pre-virus timetable with no mention of  Todwick!

Bus Stops
And what would Mrs Miggins find in the frame at her bus stop by the shops at Todwick? 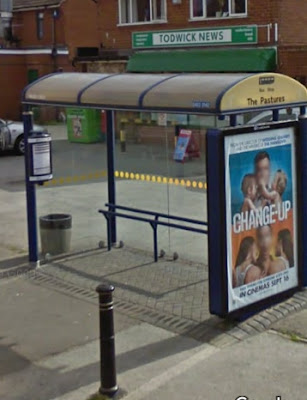 fbb asked a chum who lives in the city what was on display at stops and what was showing on the electronic departure indicators (where provided).

timetables in frames
The timetables displayed are still the pre-virus ones, and have not been changed since then. They are even displayed (unchanged) at the stops now unserved such as those served only by 83a ... 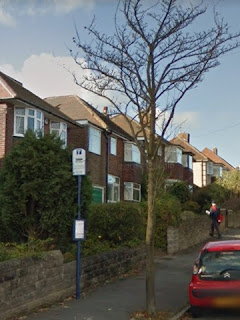 ... where unsuspecting would-be passengers will wait for ever for buses which will never arrive. All the changes are a state secret unless you know where to look on various websites.

People have no idea what is operating and when.

Traveline Phone
What about telephoning Traveline?

Oh dear! fbb is really sorry for the folk answering the phones. They are working from home, which is never very satisfactory, but they appear to have totally inadequate information.

... and asked about a journey from Todwick to Hallamshire Hospital for an appointment at 1400.

The agent apologised that it might take some time. It took 5 minutes. Part of the delay was due to the operative's initial search for Northern General Hospital; but even after that, he struggled.

fbb thinks he was trying to match paper (remember that?) information with inaccurate computer output. What was absolutely clear is that the poor man was very inadequately equipped to help the public.

Appalling, unnecessary and quite wrong!!

BUT HE GAVE THE RIGHT ANSWER

1310 from Todwick shops, direct to the Hospital arriving just before 1400.

Give that man a chocolate peanut for doing his best!

So, back to the opening question.

How does Mrs Miggins of The Pastures know that she has her buses back?

Assuming she does guess that something different is happening on the streets of Todwick, where can she find the times of these buses?

Who will she ask?

Does she have to ring Traveline and hope the agent can work it out from the poor information he is given? Is she prepared to pay the high price of enquiring every day that she might wish to travel, just in case.

Or maybe trawl through a whole heap of tedious over-engineered web sites just in case something has changed?

What she needs is a one-stop quick access to timetables.

It is called a timetable book or a timetable leaflet. It is cheap to produce, can be done area by area and could, with a little effort be made available in time for even emergency changes. It can be done in-house using a photocopier and be ready in minutes once the revised timetable is created.

The bus operator has to organise schedules, organise staff shifts, organise maintenance and fuelling all of which take time. Printed material or at least quick and obvious access to oniline timetables supported by, say, press advertising and a general notice on the buses and available in local shops, is needed to help people cope.

If only there were a simple app or web site where timetables could be checked easily without wading through clutter and multiple key prodding.


Next Chinese Trees blog (plus) : Friday 15th May
Posted by fatbusbloke at 02:00