Castles In The Square (5) 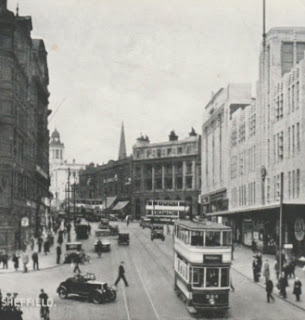 Five years after the war had ended it is still a mixture of trams and a few private cars. 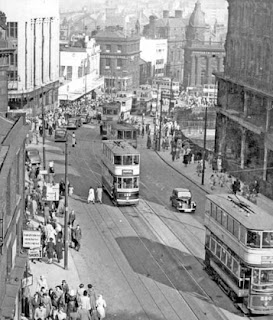 Above you can see the Walsh's and Marples sites (right) still awating rebuilding as were Burtons plus C & A on the left - but not a motor bus in sight. 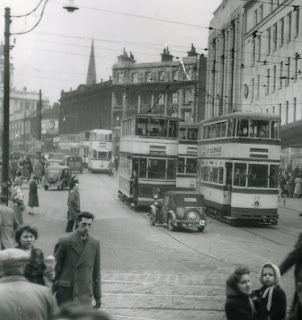 At this stage, most bus routes either ran to/from Pond Street bus station or used mini-terminals on the periphery of the tram dominated city centre. But only four years later, under an accelerated tram replacement programme, buses were taking over.

The last tram ran through the High Street in October 1960, thereafter queues of buses replaced queues of trams. 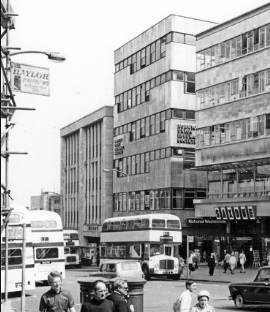 Nothing much changed after Castle Square (The Hole In The Road) opened; there was just a roundabout where once a T-junction existed. Even when Arundel Gate opened, buses still followed their traditional routes through the High Street.

The first of the new generation trams started running in 1994 after horrendous disruption and vociferous complaints from traders and general public alike.

All the present tram routes use (top to bottom in the aerial picture below) Church Street, High Street, Castle Square and Commercial Street. 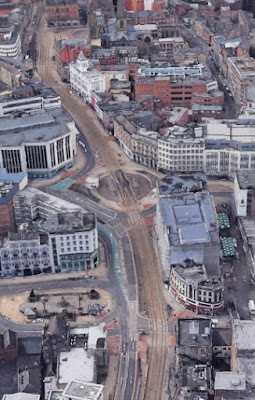 When Birmingham introduced itsm trams and extended the route into the city centre proper all buses were summarily expelled from Corporation Street ... 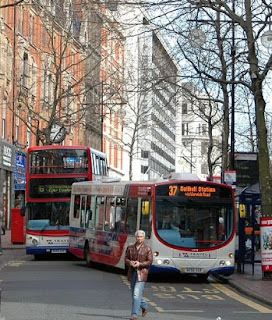 ... to be replaced by just one tram route.

In Sheffield such a radical policy was not pursued. It was decided that High Street and Church Street should be used by buses travelling westbound only ... 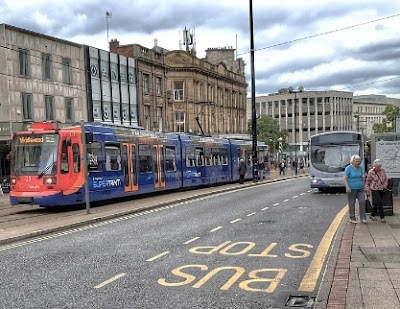 ... leaving two-way trams to own the former eastbound carriageway.

Opinions differ as to the real reasons, but as part of the tramway project the Castle Square subway system, by then in poor condition and often frequented by some of the less appealing Sheffield residents, was filled in. 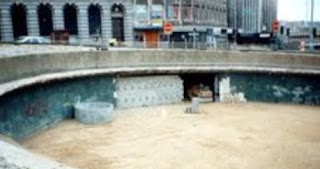 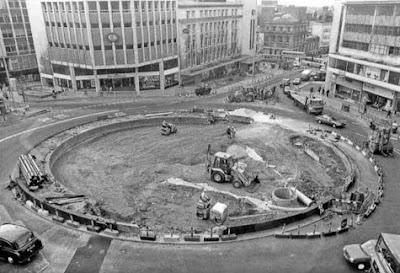 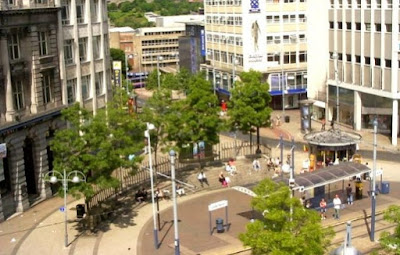 ... with just a circle of paving to remind us of what was once there.

So where DO the buses go? Answer, the wrong way round a huge misshapen roundabout of city centre roads. 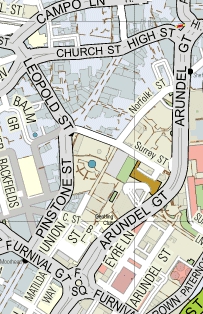 High Street, Church Street, Leopold Street, Pinstone Street, Furnival Gate and Arundel Gate is the route, but, as you might expect, it isn't as simple as that.

This for example. is now the road plan at the former Castle Square roundabout ...

... effectively one two way road with a big bend and a couple of one-way spikes north and east.

Fortunately Sheffielders are a canny lot and they quickly got used to finding their bus; but for a visitor, even for a more knowledgeable fbb, it can be one of the very dark arts of the city's Public Transport.

Would it have been possible to keep buses and trams both ways in High Street and Church Street? Probably, but only if buses did not take any layover there and only if pavements were narrowed. Neither would be a particularly desirable solution.

How about "doing a Birmingham" and getting rid of buses altogether on these two roads? Perfectly possible, but probably politically provocative.

Sheffield's city centre can easily become clogged with buses - yet the bus station (a k a interchange) is virtually empty. Such are the dubious benefits of the commercial model of bus operation.

And Pause For Today 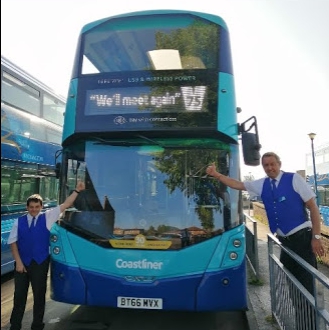 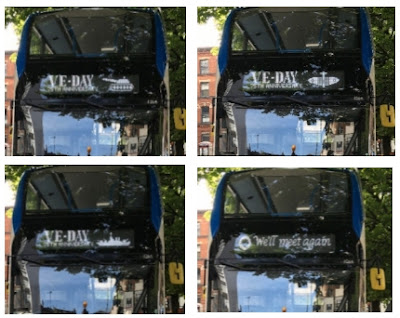 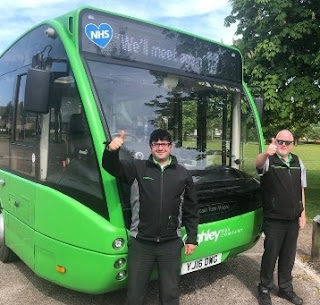 fbb was two months and 12 days old, so can remember very little!

Next Saturday Stuff blog : Saturday 9th May
Posted by fatbusbloke at 02:00