Hulleys Hupdate
Thanks to those who added comments to yesterday's blog about Hulleys services 66 and X70. It does appear that 66 will die unless another operator or Derbyshire Council comes up with a cunning plan. The X70 does nor replace the 66, as was pointed out, and a timetable extract is shown below.

Since the major shareholders of Hulley's retired and sold on their holding, there has been much speculation amongst seasoned bus watchers as to the future of the company. There may well be more to come from the Baslow depot. 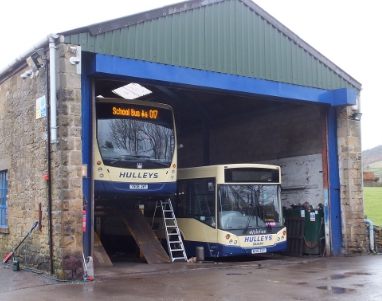 Nostalgia : Not What It Used To Be (1)
fbb has recently taken a deep interest in OO gauge tank wagons, spurred on by the gift of an ancient Hornby Dublo "Royal Daylight" model from long long ago. 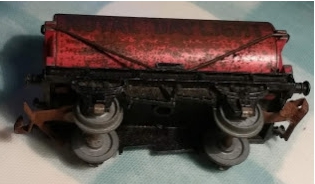 This odd arrival provoked the old man into a lengthy research project (obsession according to Mrs fbb) to assemble a collection of such wagons to reflect the history of OO gauge modellimg since 1935. The collection is growing rapidly! 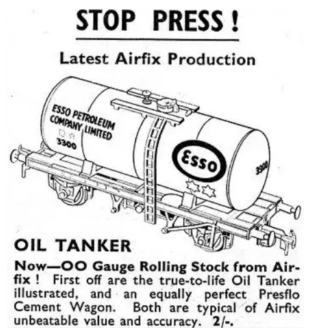 It was in 1960 that Airfix, continuing from the success of the OO building kits, announced the arrival of two wagon kits. At two bob a piece they were well within the range of your author's pocket money. So, aged 15, your blogger bought both. One was a Presflo cement wagon ... 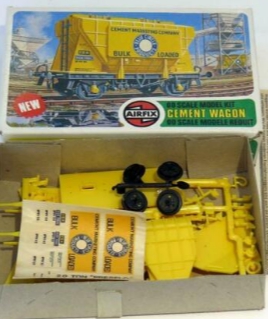 ... and the other was a tank wagon. So when fbb found the kit on non-auction ebay, post free and only a few pence more than the current retail price ... 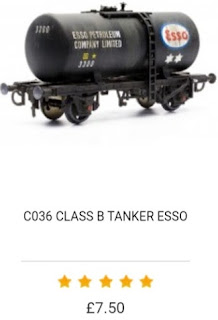 ... it was obvious what had to be done. It is worth remembering that this plastic model was so much more detailed than anything available to the average (below average?) 60s modeller and, even today, the detail is excellent considering that Dapol (current manufacturers) are using tooling that is just under 60 years old! 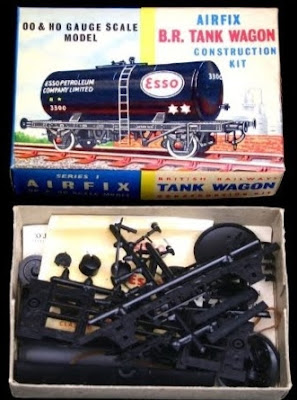 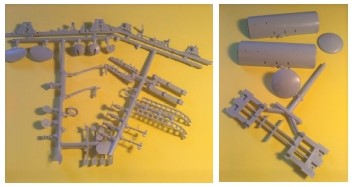 ... plus two sprues (technical term for the "tree" which holds the parts) of fiddly bits. What fbb did not realise however was that Dapol now includes real metal wheels ... 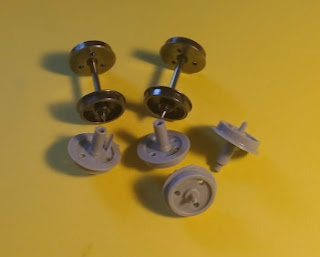 ... to replace the plastic; and real couplings ... 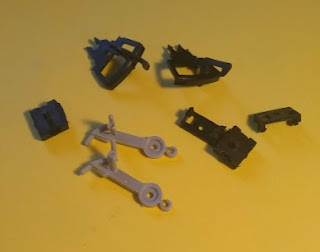 ... to replace the weird non-standard efforts supplied with the original kit. Assembly is straightforward, or, at least it would be if fbb's fingers hadn't become chubby and his left hand didn't occasionally get the wobbles! Getting the brake blocks in was horrendously fiddly. 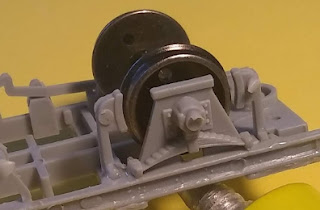 The other problem was that the chassis moulding was quite badly warped. 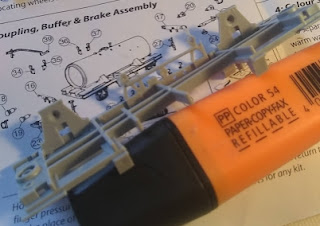 Mrs fbb's clothes pegs were needed to pull things together! 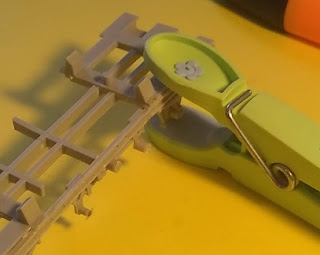 Just like in 1960, fbb filled the tank with gravel to add weight to the finished model. 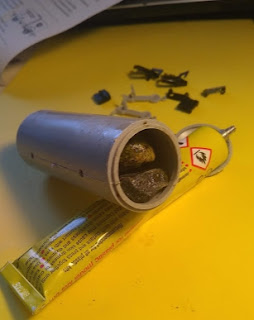 But, all assembled. the tanker looks the part and the warped chassis was tamed by the solidity of the tank itself.. 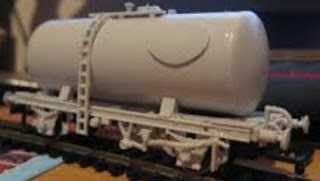 It only needed painting ... 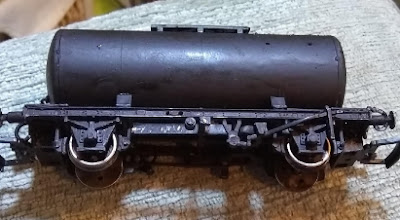 ... and the transfers (decals) added. Therein lies a snag; no transfers were included in the pack as delivered. fbb has e-mailed Dapol and awaits a reply/sheet of transfers.

But just under 60 years after his first assembly job, the tank wagon is a "beaut" and contributes well to fbb's "history of railway modelling" obsession project.

For the record, here is a picture of the real tank wagon, ex works before delivery. 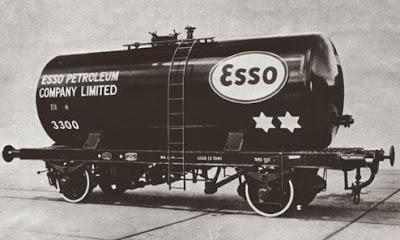 And below is a typical Hornby Dublo tanker from the same date. 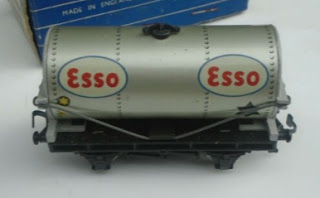 Pedal Power to the Pub
The "save the planet" brigade are keen that we should cut down our use of fuel and take to our bikes but Blackpool has gone one better. Or ten better. 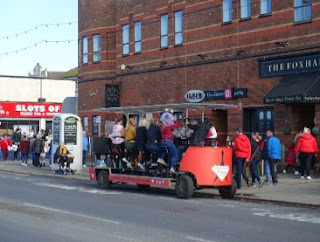 Our hand built cycle bus has been designed by our Engineers for fun tours along Blackpool Promenade. Making it a comfortable ride as ten of you pedal the bus and all 16 of you enjoy the sites & people watching with music or karaoke.

​Safety is very important to us, so we supply an experienced driver at all times.  We always give way to passing traffic in the safest possible way, we also expect everyone on our tours to respect the public and tourists, but by all means put a smile on their faces. VIP's can bagsy the back seats without pedals & let your friends do all the work for you! A fun experience with friends is money well spent & from just £8 per person for one hour, pedal party tours are a guaranteed good time. The cycle bus is manufactured from a combination of car and bicycle parts which holds 10 cyclists plus 6 passengers, It is highly geared to make it easy for you to cycle.

You would hope they mean "low geared"!

Our pedal party tour "bus" is equipped with:
Sound system with MP3 / Android phone connection
(to play your own music between stops)
U-shaped bar with hand rails for you to face each other
Lighting system
Large roof for your protection
Ponchos for that pesky sideways rain (that dodges the roof)
Karaoke
Centre stage / Dance floor!
Presumably manufactured by the same team that built Dr Who's Tardis? Stage/Dance Floor = narrow bit in the middle without seats suitable for jiggling rather than dancing! 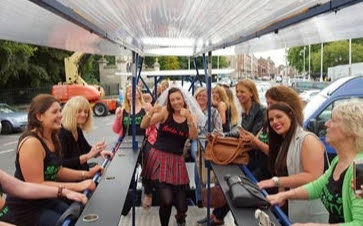 OK, modern "dancing" is more like jiggling but you would find it difficult to execute a good Pasodoble on board.

You do wonder about the ability of a typical Blackpool Hen/Stag Party to pedal with sufficient vigour after just a few pub crawl stops!

And there's more! This one, without bar, jacuzzi, dance floor and restaurant, was photographed in London. 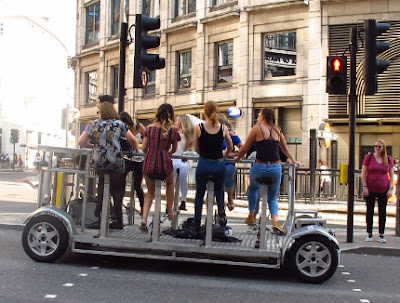 Mrs fbb never had a hen party, nor did fbb Stag. He had home made potted beef sandwiches shared with his Best Man in the home of wife-to-be's friend on the eve of the nuptials. Just as much fun!

Compliments for the Condiments
When fbb wrote about the Heath Charnock boat bus (yesterday's blog) he omitted to include one of Roy's pictures - namely a very appropriate salt and pepper available for the use of customers. 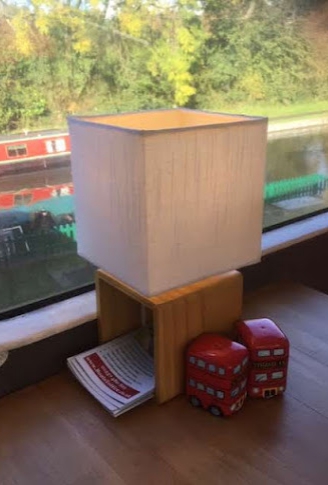