Worries Whilst Waiting at Watford [4]

Only TWO "proper" bus services terminate the bus station adjacent to Watford Junction station. They are both Transport for London routes and both are operated by Arriva. There is the 142 from Brent Cross ... 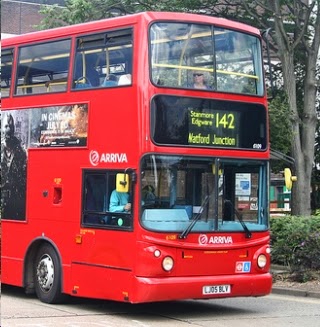 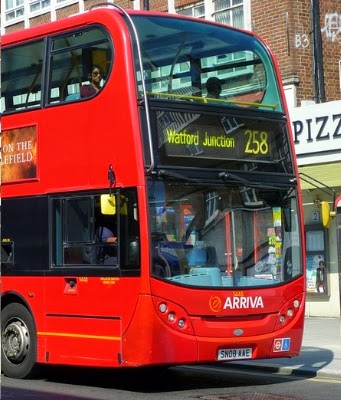 Everything else passes through, with only the occasional journey terminating in the evenings. That means that the bus station can occasionally be empty, much to the chagrin of taxi drivers who object to their cramped conditions! These two terminating routes arrive at The Junction via Clarendon Road and St Johns Road ... 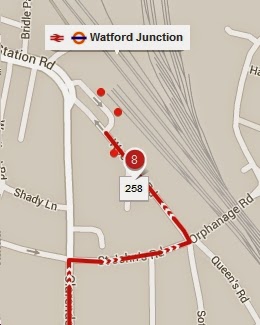 ... and "wait time" on Woodford Road before moving on to their departure stands in the bus station. Much to the chagrin of motorists who would like better "setting down" facilities.

One other bus service, duly registered with the Traffic Commissioners and thus, theoretically at least, available to the public at large, runs every 20 minutes Monday to Friday daytime, every 30 minutes Saturdays and Sundays.

The 311 (no route number shown on the vehicles) carries mainly train passengers on their route to the exciting Leavesden film studios, where the great Barry Putty boy wizard is ably celebrated. 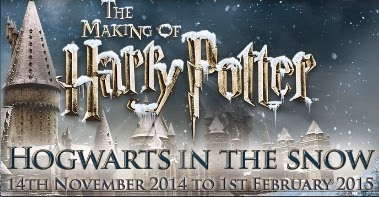 fbb did, once, try to watch one of the films (Barry Putty and the Squggly Spidery Things?) but found it tedious in the extreme. Anyway, Mullaney's luridly decorated deckers carry the anticipatory crowds from Stand 4. 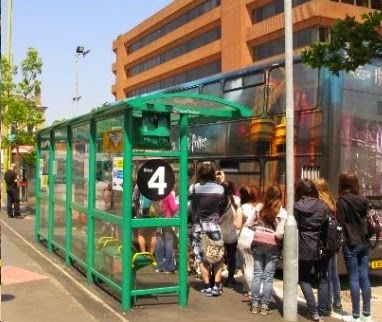 Because that is the big problem with Watford Junction bus station. Finding your way around!

We arrive at Watford Junction railway station. No 3 son advises that a substantial majority of bus passengers are interchanging to or from train. The first thing that greets you is a Hertfordshire epip. This mischievous little creature ... 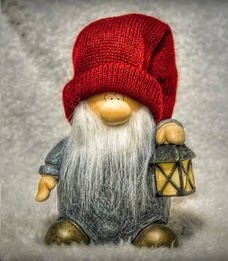 ... stands ready to advise and guide passengers unaware of the complexity of their omnibological quest. If only!

Sadly there is no bus timetable information whatsoever at Watford Junction. Neither is there any enquiry facility or even a minimalistic leaflet rack in the station. Of course you could look at the Watford network map, similar to that available on-line ... 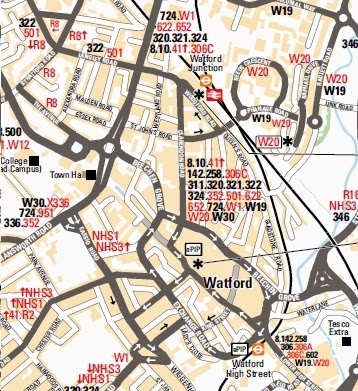 ... except that there isn't one of those either. So the epip is our starting point. 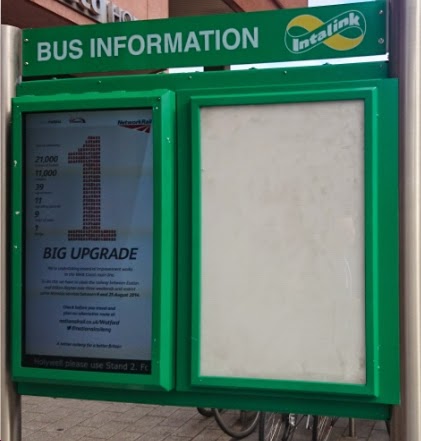 ePIP is an "electronic Passenger Information Point". The left hand panel is, indeed, an electronic display which can (and often is!) used to display helpful information for bus passengers, as here, reminding arriving weary travellers of the disruption that they have just experienced on their train journey. Cheers!

Sometimes the panel simply says "refer to printed timetable" which, like the yeti, bigfoot and the Holy Grail is a mythical concept unavailable anywhere near the ePIP. But on a good day, with a following wind, you get something like this:- 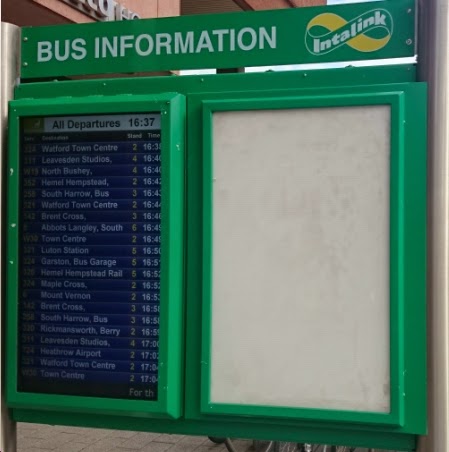 The right hand panel appears to be permanently blank and resolutely non-electronic; an nePnIP in fact. Which is a great pity; because the ePIP side is a tool of very limited value. Here is a clearer view ePIPly photographed early one morning. No 3 son (who supplied much of this stuff) starts work early! 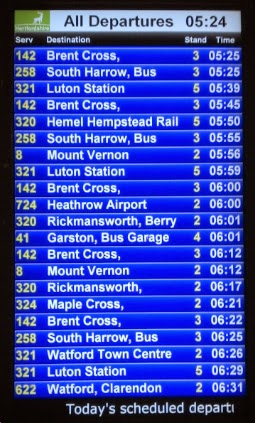 Unlike a departure screen on a station platform, these do not scroll and do not show intermediate points; they show the database terminus of the journey concerned. So we have ...

... to confuse us. Perhaps. It follows the we need to know and understand the whole route to find any intermediate destination.

Which bus, for example, would take fbb to Edgware?

Then, this crude departure list is in time order [NOT "real time" but scheduled departure time] and displays about 30 minutes worth of buses during the main part of the day; possibly not enough for customer confidence. Whilst it pains fbb to write positively about South Yorkshire PTE, their main departure board at Pond Street Bus Station, Central Bus Station, Sheffield Interchange is in destination name order.

Although you need to allow time to scroll through several lots of screens, it can be very helpful indeed. If you want to go to Bakewell, for example, wait until the Bs come round and, lo, it will tell you time and stand number of the next departure. It would, of course, be more helpful if it showed the correct place names rather than, sometimes, the PTE's wrong ones! But you can't have everything.

So, by some feat of mind reading, we have discovered that the bus to Edgware is the 258 (have a chocolate peanut!), all we need to do is to find stand 3.


Next bus blog : Tuesday 11th November
Posted by fatbusbloke at 02:00