Strange is the effluxion of time; fbb would have never expected to refer to the great High Speed Train as "historic" - but in main line inter city terms is almost is. Here are "traditional" HSTs lined up at Paddington ... 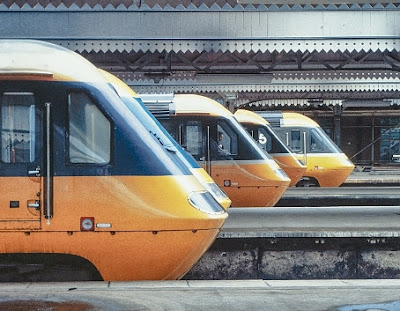 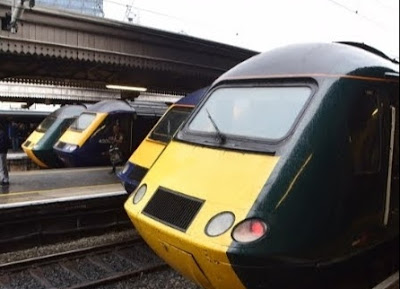 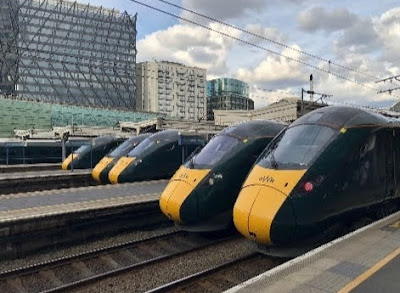 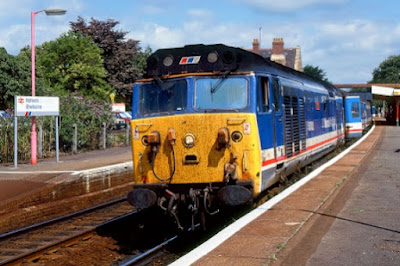 We can easily push class 50s between Waterloo and Exeter into the category of "history" but how do we feel about this "historic" train? 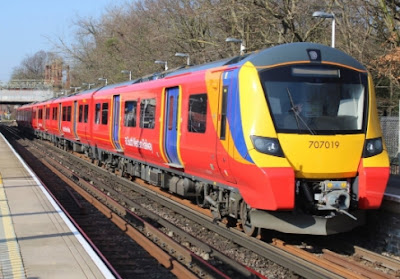 In one of the strangest commercial decisions of recent railway history, First Group won the South Western franchise from Stagecoach with a deal that offered to replace ALL the suburban trains with new stock. Fair enough for some of the classes that were getting a litle long in the tooth ... 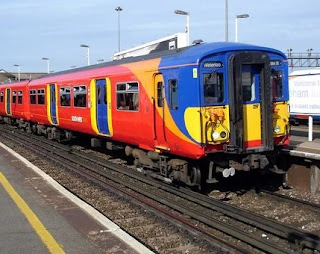 ... but to throw away the class 707s before the first one was delivered was - at best - strange. What was even stranger is that the DaFT accepted the bid!

First's standard train for all their third rail routes will be the new class 701.

In March 2017, South Western Railway (SWR) was awarded the South Western franchise with a commitment to introduce 750 new carriages. In June 2017, SWR awarded a contract to Bombardier Transportation for 90 Aventra DC EMUs, with 60 ten-car and 30 five-car trains to be introduced from 2019. There is an option to purchase as further 5 ten-car units if required by October 2020. These new trains will eventually replace all of SWR's Class 455, 456, 458 and 707 fleets, the last of which will transfer to Southeastern.

First Rail now have one to play with and it is trundling about the network, usually at night as here on a trip from Waterloo to Guildford. 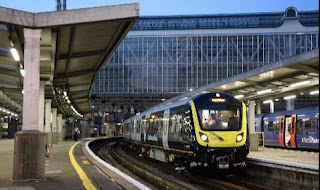 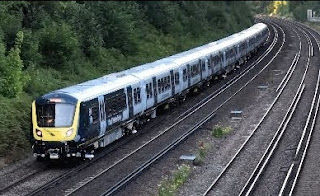 And, Talking Of Testing ...
Here is another Bombardier product, this time for the West Midlands local franchise. 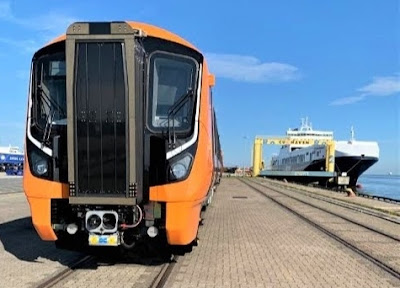 Has it just arrived on a ship from Europe or Japan? No. Bombardier is based in Derby, very much in the UK.

Actually it is waiting to be loaded ON a ship to be taken to Velim.

The Velim test center (Czech: Zkušební centrum Velim) is a railway rolling stock testing facility at Cerhenice, close to the city of Poděbrady in the Central Bohemian Region of the Czech Republic (Czechia). It has become one of the main testing locations for new types of rolling stock designed for use in Europe, and has been a fully accredited European test centre since March 1995. The most notable feature is the Velim railway test circuit (Železniční zkušební okruh u Velimi/Cerhenice), consisting of two large standard gauge railway track ovals designed for continuous running of new rail vehicles.

The centre is owned by the Railway Research Institute (VUZ, Výzkumný ústav železniční), a subsidiary of the national railway operator, České dráhy. 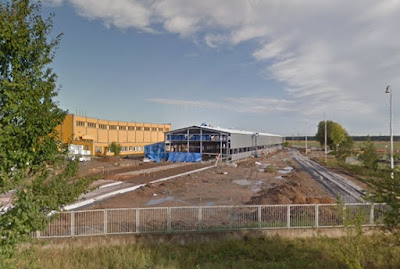 The big advantage if this rapidly expanding facility is two single track ovals of line (just like a toy train set - but a tad bigger) where trains can be run at full high speed if necessary. This Goodle Earth view shows part of the big oval with the smaller loop nestling inside. 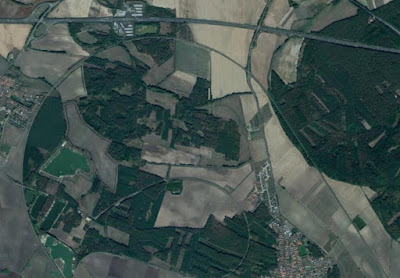 To get a better idea of scale, note the village lower right. 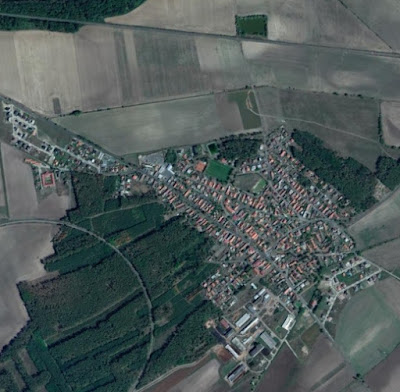 This is the village of Sokoleč which lies between the fast big ring that runs across the top of the above aerial view; and the more obvious inner loop. Both circuits are of high quality ... 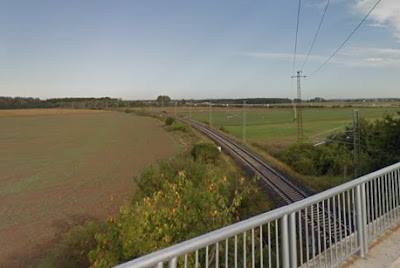 ...and the village is sweet! 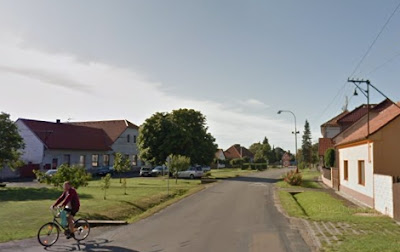 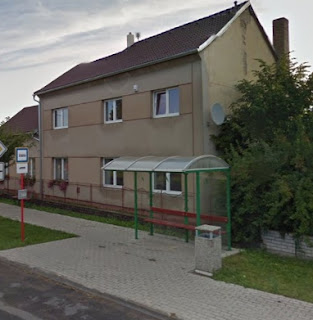 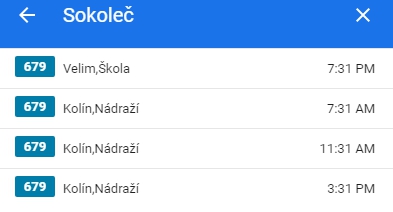 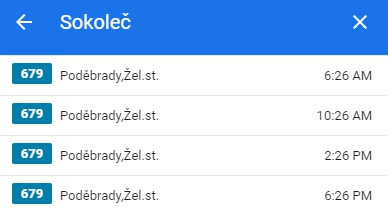 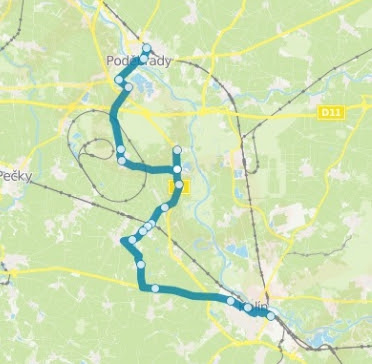 More Moolah From The Ministry
Just in time (actually a week late for Sheffield Supertram whose piggy bank was embarrassingly empty last Monday), DaFT has announced ongoing funding for bus and light rail to ensure that the present level of service can continue and to help a bit more as services increase from the beginning of September. 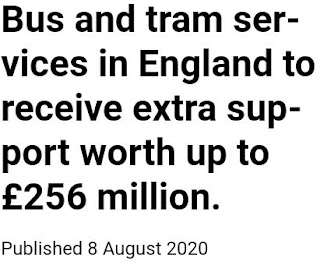 There will be huge sighs of relief from bus bosses (and their employees - even their customers) as collapse is averted yet again - and at the last minute as usual. 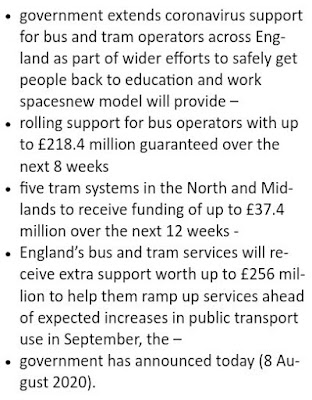 Of course there is the usual caveat. This is not "Government" money - it is fbb's money and that of all this blog's readers (plus a few more people!). It is kind of us to let HMG spend it, BUT, sooner or later we will all have to pay up.

A new "Spitting Image" series airs to BritBox this autumn