fbb is often accused of being "down" on South Yorkshire PTE, an attitude heartily endorsed by folk who live there and struggle to use the bus service. The "Good News" is that after months of "masterful inactivity" on-line, current timetables have now started to appear; not only on-line, but in the form of departure lists at bus stops. 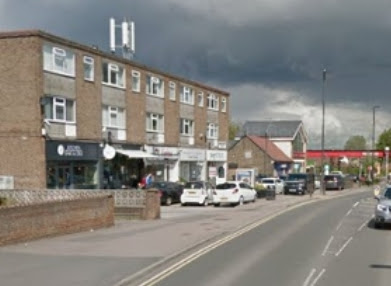 Here is the stop opposite the shops at Bradway and outside the Goff Club. 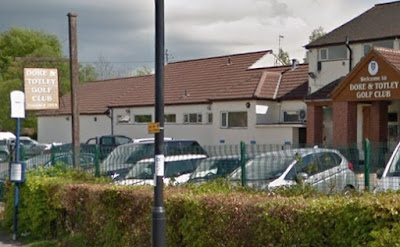 Passengers would board here to make their way back to the terminus at Bradway Bank, confusingly also called "Bradway" by bus operators and the PTE although it isn't. 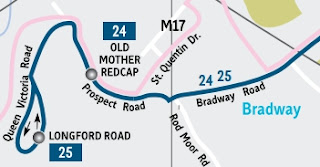 Old Mother Redcap, the pub at the terminus, is closed and has been for several editions of the map. For MOST of the day, Monday to Saturday, Bradway is served to Stagecoach route 25 ...

... with half the journeys continuing to Longford Road. To this timetable must be added some early morning and late evening buses on First's route 24, which normally terminate at Low Edges, but fill the gaps in service 25.

The PTE timetable merges 24 and 25, sensibly, but shows neither of them correctly - contrast and compare the 25 journeys in the morning. 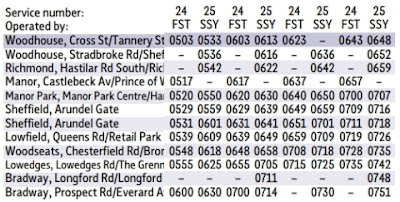 Two First Bus 24s extend to Bradway Bank (Prospect Road). Notice, in passing, that Stagecoach does not admit to the Skelton Lane variation after leaving Cross Street in Woodhouse.  - you just have to KNOW.

Anyway, here is the Monday to Friday departure list as displayed outside the Goff Club. 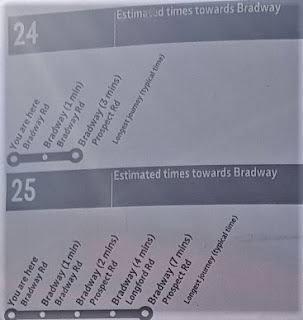 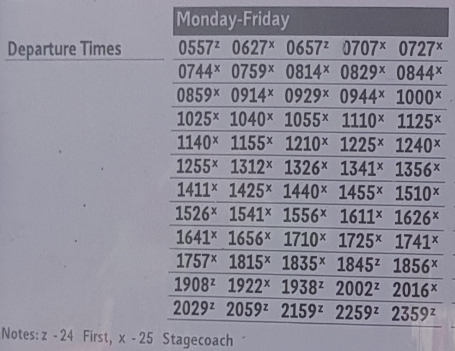 There is no way of knowing which of the departures you might want if you were foolish enough to hope to get to Longford Road.

It is even worse in the other direction where the PTE timetable does not mention Longford Road at all.

You just have to guess! And at the other end of the route, it implies a distinct lack of buses to Skelton Lane. In fact ALL 25s go there.

Good News From Sheffield ...
Good News From First Bus?
South Yorkshire bus forums, Twitter etc are awash with some remarkable news. The lumping of First's Sheffield, Rotherham and Doncaster operations with Leicester, Stoke on Trent and Worcester seems a management step too far.

But, almost secretively, there was a new livery launch in Doncaster a few days ago. This took place at Doncaster Racecourse but seems to have been ignored by the local press - even ignored by First Bus with no mention on their web site.

But not very imaginative? The livery is the same generic fuchsia fronts which proliferate in Leicester, for example. 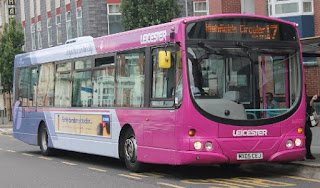 But then comes something much more interesting. 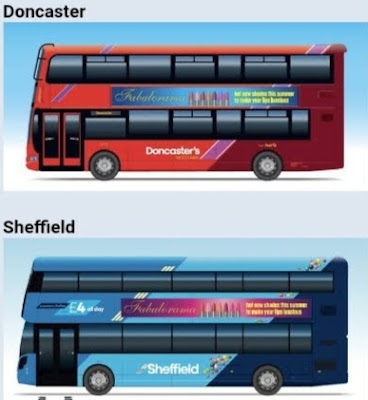 The Doncaster image reminds us oldies of the unusual final paint job from the days of Doncaster Corporation. A plain red plus town crest was enhanced by an oddly curved bodyside stripe in purple, edged in white! 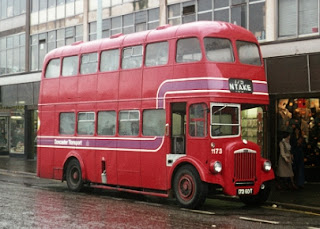 The new Sheffield variety only barely picks up the colours of good old Sheffield Transport; lots more blue and only the tiniest hint of cream. 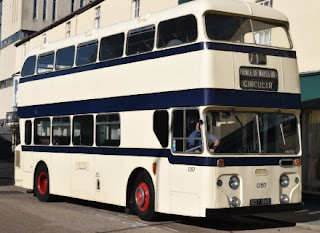 First only has two depots, in Sheffield and Doncaster. So what happens to buses in Rotherham? Surely the good folk there will be decidedly unchuffed to have an arbitrary mix of "Sheffcaster" vehicles on their local routes.

fbb does not know how "official" the two "depot" based liveries might be - the source of the forum posts seems to be unofficial.

P.S. fbb has it on the highest authority that the new red and blue liveries are technically "proposed", but a formal decision on adopting is due any time now.

Freight Is Greight
One of the rare delights of some of our preserved railways is that they do operate goods trains. Clearly such operation earns no money for the line; but it does re-create something of the real railway. Here is a train of vans trundling along the Great Central. 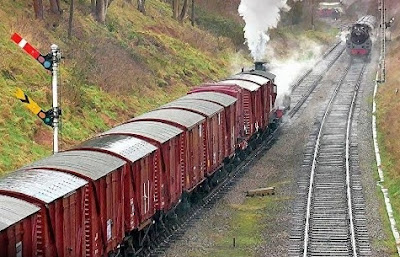 Very nice - but was there ever a van train with such clean wagons?

Also on the Great Central, a coal train ... 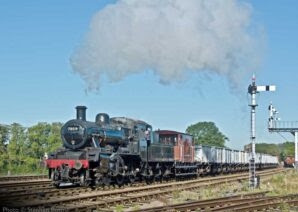 ... and a diesel hauled mixed goods. 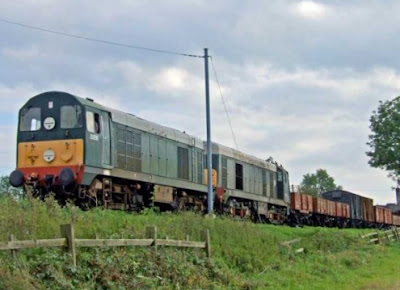 Trix Triang Twin
fbb has been reminded that OO gauge models of electric locomotives took a big step forward with Triang in the 1960s. The Margate company introduced overhead catenary ... 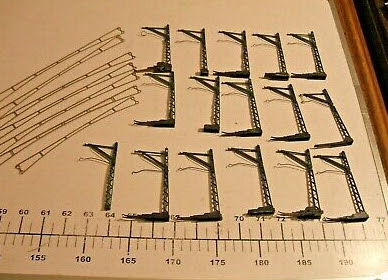 ... and masts which clipped into the track, thus needing no baseboard fixing. The catenary could be wired up to allow two trains to be controlled on one track, although how often this facility was used is unclear. Three locos were produced initially. A class EM2 from the Woodhead electrification ... 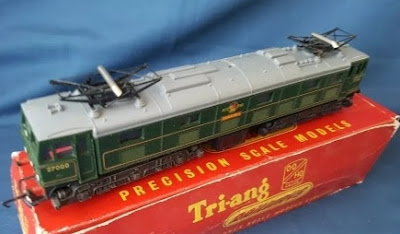 ... and its "Transcontinental" equivalent. 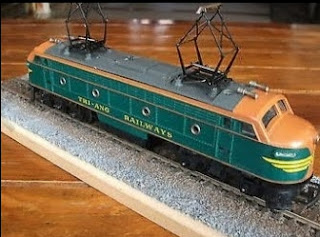 Delightfully, Triang plonked a steeple cab body on their ubiquitous "Nellie" 0-4-0 chassis and offered a "UK" version in green ... 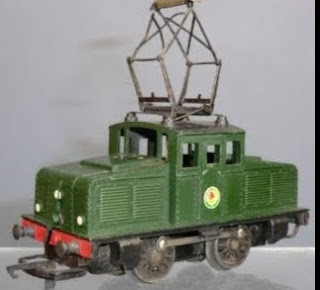 ... and transcontinental in red. 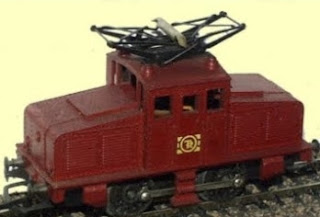 But this version in BR black may well be a hobbyists repaint. 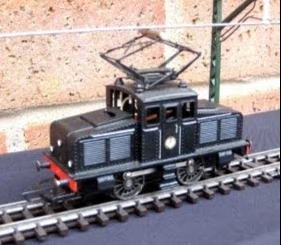 This little model could easily be the basis of replicating some of the really early 1906-ish locos as covered in Henry Greenly's book, subject of recent blogs. 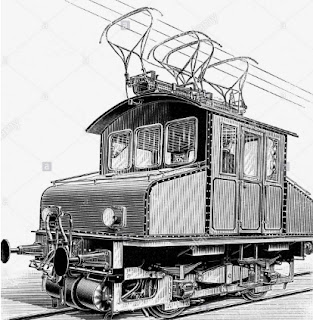 Something like the above (but without the three-phase pick up!) would sit nicely on the dock shunter chassis. 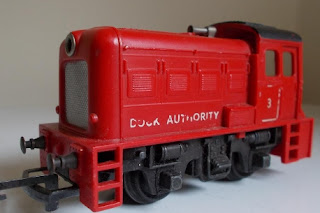