Worrying Walls And Wearisome Windows
Time for a song:- 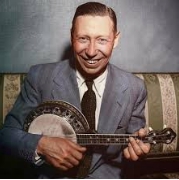 Now I am makin' windows to build a carriage shed
As a clumsy bodger, I should've stayed in bed!

Buy frames in; but they don't fit
You cannot see the sense of it;
It tends to make me want to spit
When I'm makin' windows

But for my hobby I'll work hard
And I'll never stop (1)
I'll try to make it proper
Till I finish off the top.

It comes unglued, sweet names I call.
On the floor the bits will fall.
I'w tempted just to smash it all all!
When I'm makin' windows


The original carriage shed (now in self destruct mode - actually totally self destructed!) had a crude and plain back wall, a single sheet of ply with laser cut windows stuck on top of white plastic sheet to simulate the quarry face outside. 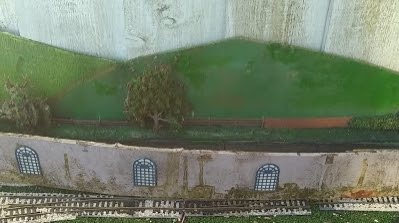 Foolishly, fbb decided to do better with the replacement.


Wouldn't it be nice, the old bloke thought, to have longer thinner windows at the top of the wall where they would let in the maximum of light streaming over the top of the cliff? Having bought five windows to match those in the front wall, some surgery would be needed. Place the top and bottom blocks of ten panes side by side and you have long thin windows.

But - they don't quite match! 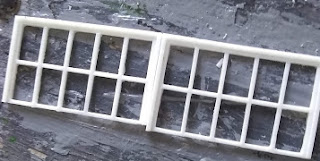 After (a) misery, (b) panic and (c) resignation to apply yet another bodge, fbb grovelled in his box of stuff he had forgotten was there and found some plastic strip. 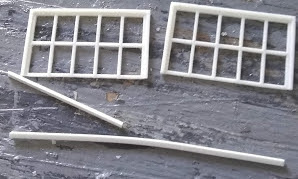 Fortuitously, the thin stuff filled the gap and the thicker stuff created the missing frame bottom. 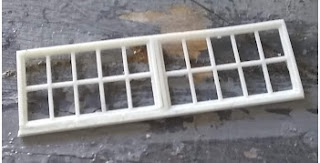 Equally fortuitously, the resulting windows were almost exactly one inch deep. fbb finds it easier to work in the old money. So, take a strip of wall 2 inches deep, the bodged windows and another strip of wall ½ inch deep and you have the requisite total height of 3½ inches to match the front. 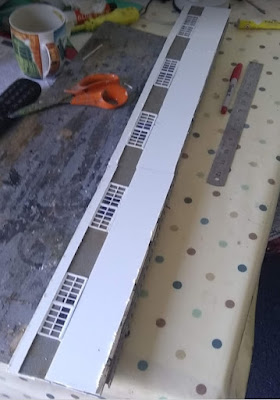 The windows are placed on a strip of "glazing" running the full length of the wall - so all that remains is to fill the gaps (roughly, what else?) with rectangles of placcy sheet, apply an extra layer to hold it all firmly and, hoopy frood (3), we have a back wall. 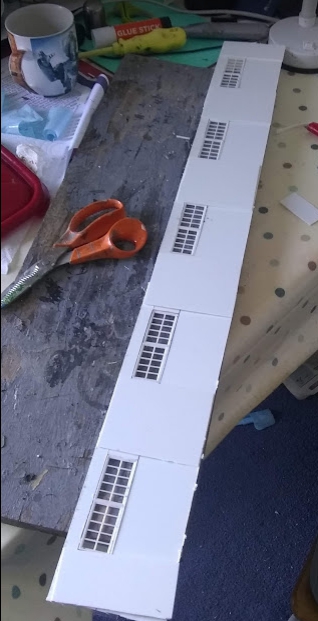 from now on, it becomes almost a repeat of the front wall, so it is unlikely that there will be more "Carriage Shed" reports until fbb is due to glue it all together. Many blog readers will heave a great sigh of relief.

Notes on the above text.

(1) Until nature and God take their inevitable course.
(2) Greet : Scottish patois for, erm, "grizzle".
(3) Hoopy Frood : expression of utter joy as utterly uttered by or about Ford Prefect in Hitchhiker's Guide to the Galaxy.

Pretty Park And Electric Ride
A notable development happened in York last week. The first of a big batch a double deck all-electric buses were "launched" for the city's Park and Ride network. 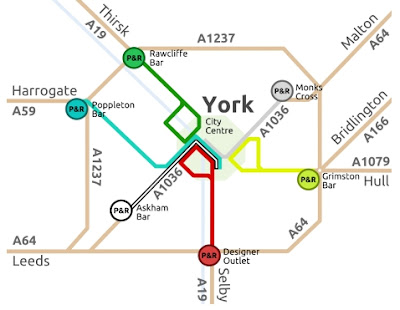 For the duration, three sites have been closed ... 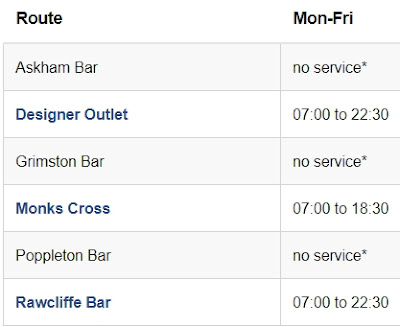 ... but, despite on-line evidence to the contrary, Askham Bar has re-opened to showcase the electric deckers. 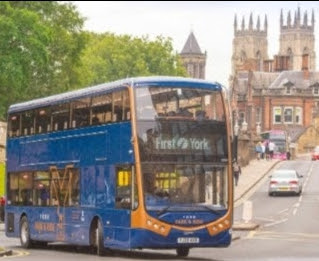 These was an official launch, but somewhat muted because of social distancing, with the press not turning up in their droves. fbb guesses there was no free grub! 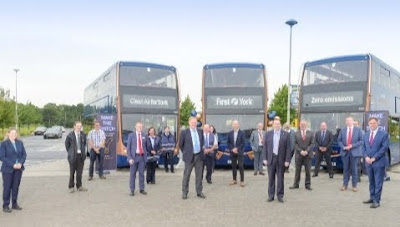 Round About Roundabout in Cambridge
Yesterday a "dutch-style" roundabout was opened. fbb is well aware that our friends from the Low Countries have a very determined policy of traffic calming, including roads that are pavements, or maybe better thought of as wall to wall pavements along which cars may travel - but slowly.

fbb had never heard of the eponymous roundabout - until now. And here is part of a Dutch dutch-style roundabout. 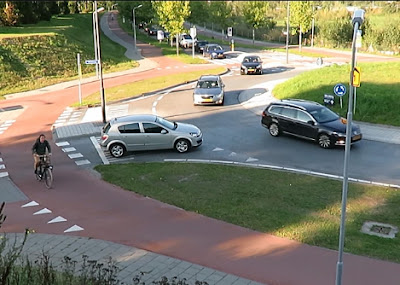 They are driving on the right and roundabouting widdershins.

Now lets go to Fendon Road in Cambridge. Confusingly, there are two roundabouts on Fendon Road, one at each end thereof. 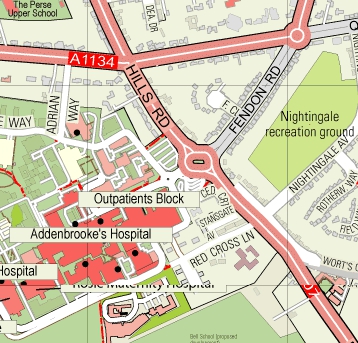 This refettled one is NOT the one outside Addenbrookes Hospital but the other one, top right. 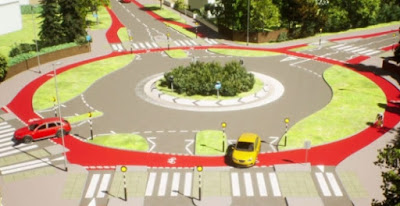 In essence a broad multi-lane roundabout  ... 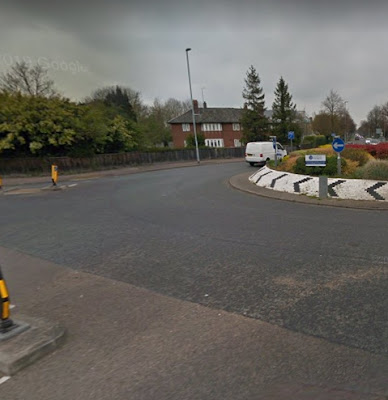 ... has been reduced in size and a new circular cycle lane added as an outer concentric ring. There are pedestrian crossings at all four entrances/exits and it appears that said persons on foot share the space with persons on bike.

Is that MORE risky than avoiding cars?

Priorities for City 1 and City 2 buses? 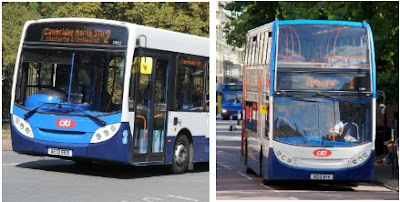 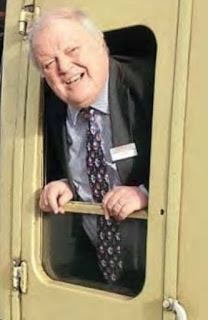 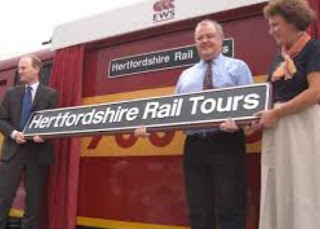 ... who was celebrated for train trips visiting obscure bits of the national rail network. In 2012 he went to Fawley (and again in 2015). Alan sends the full working timetable for the 2012 excursion with this extract showing times from Southampton ... 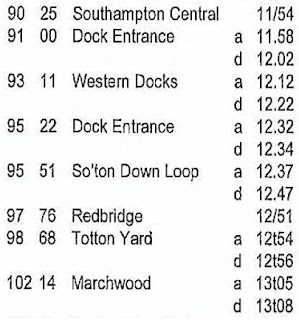 ... to Fawley and on to the Bournemouth area. 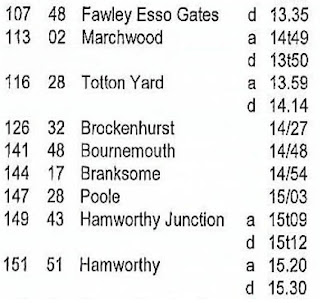 The train returned to Victoria by an "interesting" route. 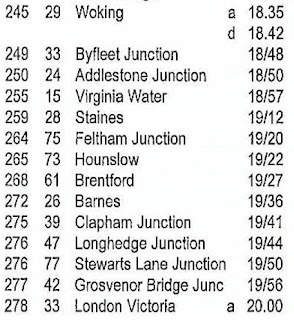 A  Simple Mistake?
fbb is renowned for his misplaced typing; with his laptop seemingly capable of transposing letters or even words! But you don't expect high incompetence from something like the Radio Times. This howler was also sent in by Alan. 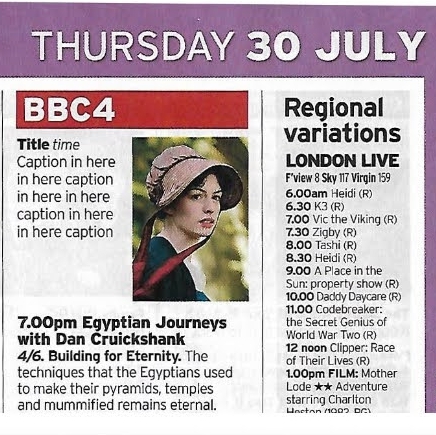 And A Big Surprise - NOT 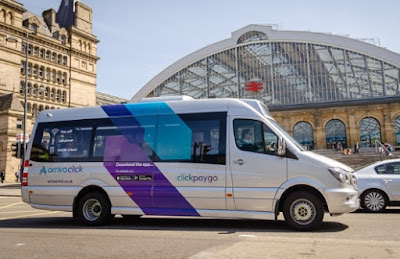 The area that WAS served is shown on this simplified map. 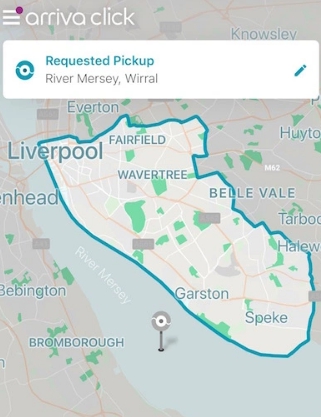 fbb attempted to research "the 211 Speke zone" but, as ever, the Arriva web site failed to deliver. 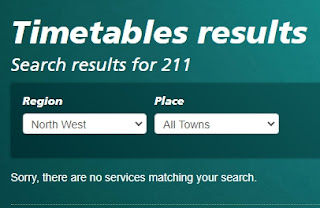 One twitter twitted all that needs to be said. 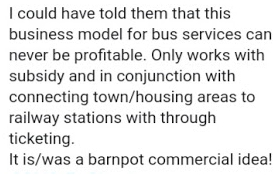 Perhaps said twit writer could list all the places where a demand responsive service HAS worked "connecting housng to railway stations with through ticketing"?