fbb's recently received book about using electricity for powering model railways seems, at first, trying to teach a grandmother, not to suck eggs, but to play with a toy trains set. Of course it is an electric train - what else could it be?

In fbb's youth most Triang locomotives (and indeed Scalextric cars) were powered by the basic easy-to-understand X04 motor. 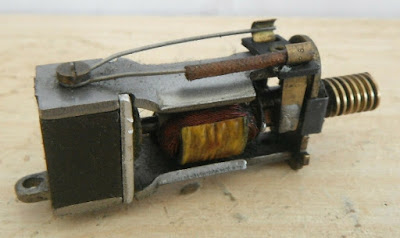 For those born too late to appreciate the technology, there was a strong permanent magne (cuboid, dark grey), a three pole armature, a copper three segment commutator, two brass brushes with small carbon blocks; and the worm wheel to drive a toothed gear on the loco's axle.

Maintenance involved occasional lubrication (usually over done), cleaning the commutator covered with too much oil, replacing the brushes when the carbon blocks wore down  and removing fluff, paper clips, bits of toffee and other detritus. If things deteriorated too badly, you could send the magnet off to be re-magnetised but this was rarely necessary.

fbb was recently given a 1959 Triang loco because "it was old and didn't run any more". After maintenance as above (but without re-magnetisation) it runs perfectly  - over 70 years old. Would that fbb worked so well after a clean and light oiling!

But in 1906 such things would have been a wonder to behold, beyond the wildest dreams of a newly enthused electric model railway builder. 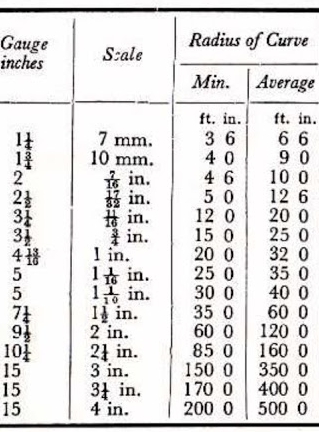 7mm scale is now called "O" gauge and is the smallest Greenly considered possible. Viable "OO" train sets did not appear until over thity years after the first edition of his little book. One model of a full-sized electric loco is illustrated ... 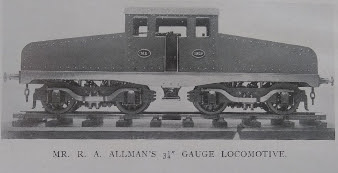 ... which ran on a track gauge of 3¼ inches (80 millimetres). It wasn't a model of any particular loco, it had very little detail and most of the space inside was taken up with motors (2) and gearing.

In an advertisement from the world renowned toyshop of old, Gamages, we espy electric motors and, hot news, a complete "O" gauge tank loco for just 35 shillings. 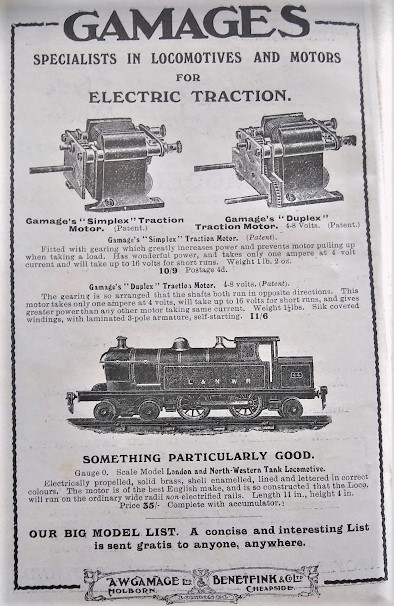 But look at those bulky motors; bulky, heavy, electrically inefficient, difficult to control and, compared with today, unreliable.

But, undaunted with these problems, Mr Greenly begins by explaining how an electric motor works from first principles ... 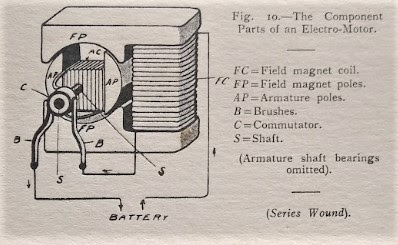 In most respects it is very similar to the much much smaller Triang X04. It has brushes, a commutator, a drive shaft and a ywo pole armature. There is, hoqwever, one significant difference. Instead of the cuboid "permanent" magnet of the X04 you have an electro magnet. where electriciy creates the magnetic field.

The technically minded amongst our readers will immediately spot a problem. Because the same electricity excites the armature and the big magnet, the motor can never change direction - it will never go backuds!

So you need a "reverser" and it all gets complicated. 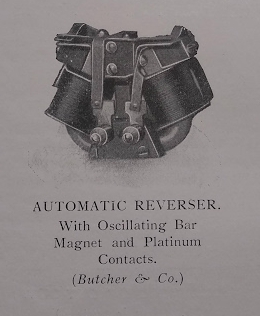 He explains how all this can be connected up ... 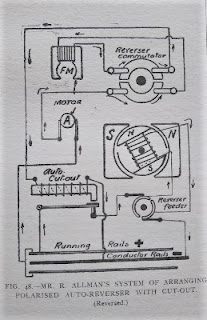 ... and how you might fit an accumulator (effectively a small lead acide car battery) inside a larger scale locomotive. 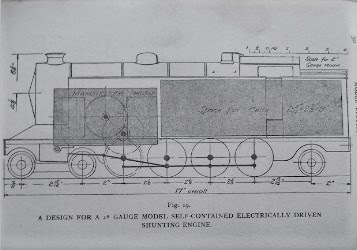 The motor and "battery" fill a 2 inch gauge loco completely.

You could, Henry suggests, even build your own motors and ... ... a resistance frame to control the speed!

It makes fbb's angst concerning the rebuild of his carriage shed seem utterly trivial by comparison!

Of which more as part of tomorrow's blog.

A Good Idea Surely : Re-Opening to Fawley
A few days ago a train ran to Fawley. Big deal, you may say; but what about the oil refinery?

Fawley Refinery is an oil refinery located at Fawley, Hampshire, England. The refinery is owned by Esso, which acquired the site in 1925. Situated on Southampton Water, it was rebuilt and extended in 1951 and is now the largest oil refinery in the United Kingdom, and one of the most complex refineries in Europe. With a capacity of 270,000 barrels (43,000 m3) per day, Fawley provides 20 percent of the UK's refinery capacity. An estimated 2,300 people are employed at the site. 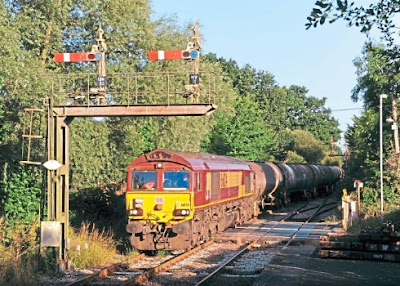 ... but these services had been progressively reduced in favour of road tanker distribution. The line also served the Marchwood Military Port.

In 1943 the little-known port of Marchwood was born on the far side of Southampton Water, its purpose to ferry equipment and men to the Normandy beaches the following year. With the coming of peace in 1945 a continuing military presence at Marchwood was needed to support the Army overseas. 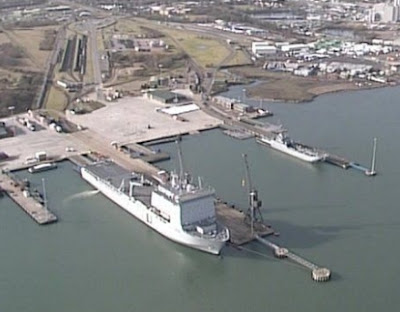 The port came into its own once more in 1982, when Argentina invaded the Falkland Islands. Once again the job of loading all the equipment the troops would need for the fight ahead took place largely unnoticed at Marchwood. It was so important to the war in the South Atlantic that the government upgraded the base after the conflict.

The Fawley Branch never had much of a passenger service ... 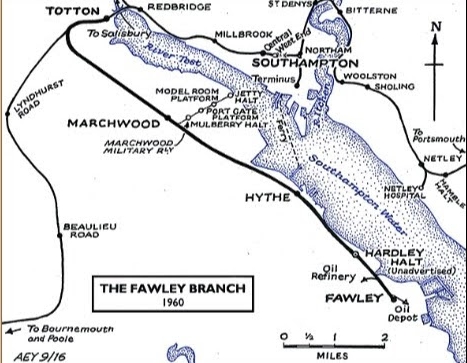 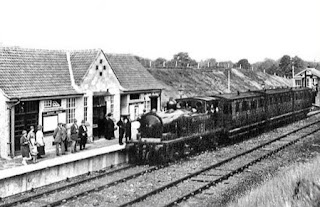 Most of the basic infrastructure is still in place ... 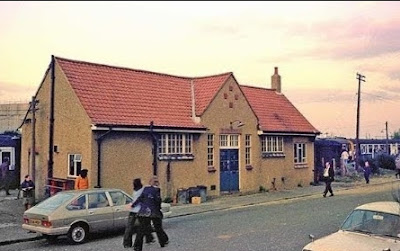 ... but not the station buildings. Over the years substantial housing development means that there has been a growing campaign to re-establish the passenger service.

Thus it was, a few days ago, that a South Western Railway class 159 showed "Fawley" on its destination blind ... 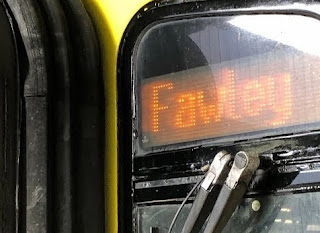 ... and took Network Rail and local authority glitterati for a run down the line to take as look. 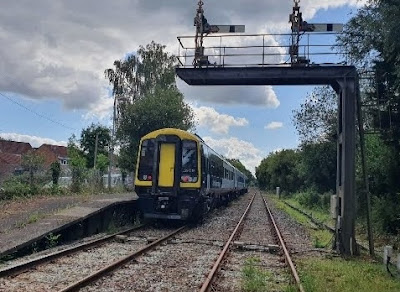 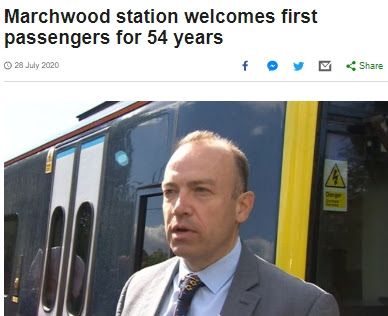 He is under-minister for Rail under Minister Grant Shapps.

The proposal has been on the table for many years with one possibility being running the hourly Romsey, Eastleigh, Southampton service along the Fawley Branch.

It should be easy to do and cost effective ...