A recap of sorts. The old main entrance to Hull's railway station was a rather grand cast iron colonnade and roof ... 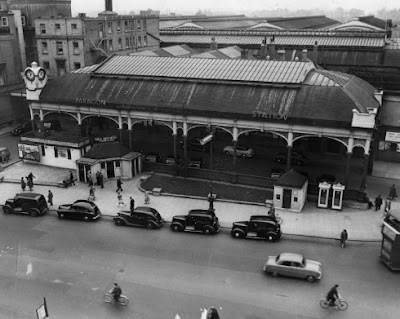 ... displaced by the 1960s office block that we met yesterday. Next along the main road (Ferensway) was the five screen cinema ... 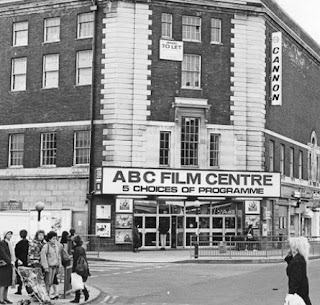 ... ABC and later Cannon. Between the two was a side road which ran along the northern edge of the five-arched trainshed. Just past the cinema block was Ferensway bus station, seen here ... 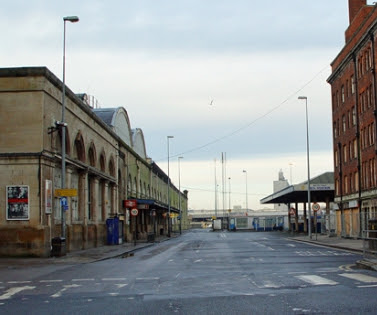 ... peeping out from thehind the block which housed the cinema. This had an overall roof, supplements by conventional shelters and featured a series of parallel stands used by Corporation buses ... 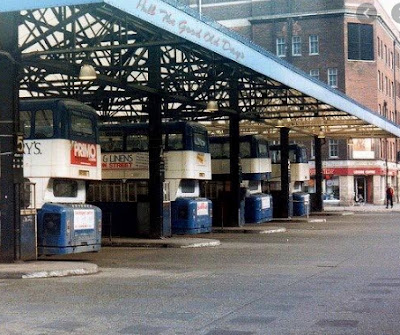 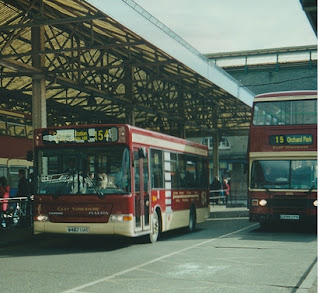 ... nice and convenient for interchange with the trains. When fbb was involved in leading a Bible Class New Year Holiday at Aldbrough, he had his fellow leaders went from Sheffield to investigate. They took the train to Hull and nipped smartly across the road to take East Yorkshire to the coastal village. Very convenient.

But along comes a cunning plan. Demolish cinema, bus station ... 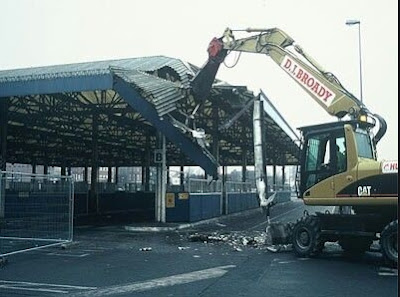 ... and sundry other properties; build a shiny new shopping centre and use some of the cash to glue a new bus station onto the north wall of Paragon station. 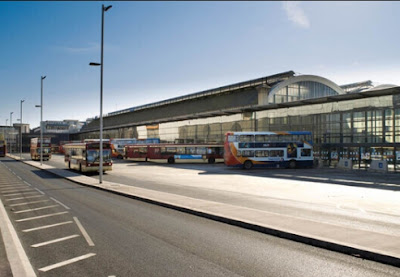 The new bus station consists of a line of 38 "head-in" bus stands (see note 2) which includes an extension to the train shed to accommodate all the services.

Apart from a couple of footy specials, all buses leave from the Interchange.

The above shot is looking back towards Ferensway. 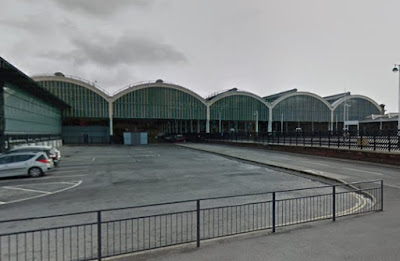 Of the five arches, three on the right still serve train tracks, No 4 provides car parking and vehicular access to the station and No 5 (left) is the bus station complete with a line of "retail facilities" opposite the stands. 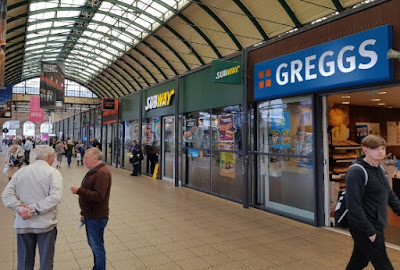 It is very impressive. 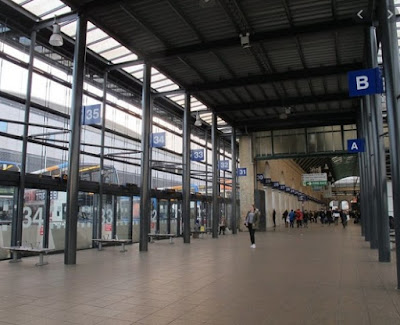 The plan puts it all together. St Stephens (top, in green) is the shopping mall. 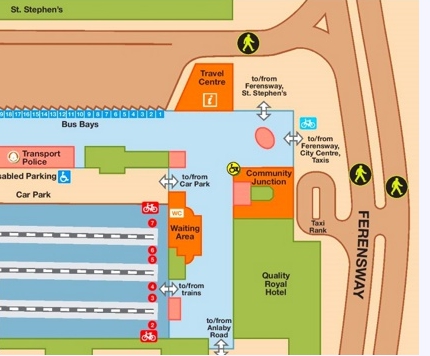 Back in May 2019, Roger French (The Uncle Travelling Matt of Public Transport blogging - see note 1) paid a visit. He was impressed, mostly.

Impressed with the plentiful information signs ,... 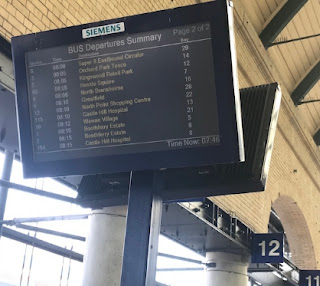 Slightly less impressed that no timetables or departure lists were displayed AT the stands, just a "next bus" sign ...

But very impressed with the Travel Centre. 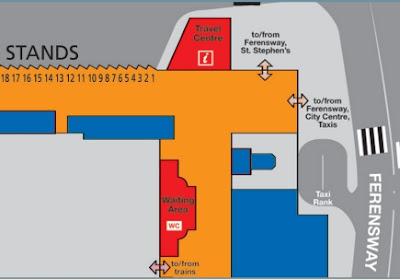 This was the booking office and enquiry facility for the trains ... 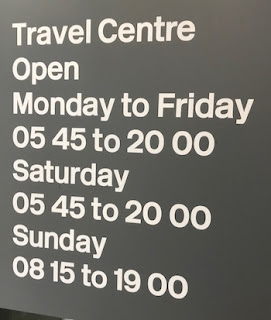 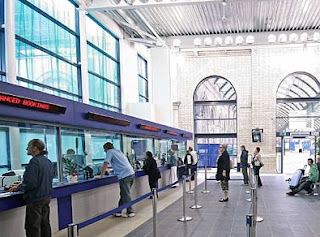 Also in the concourse was a splendid local information "thing" ... 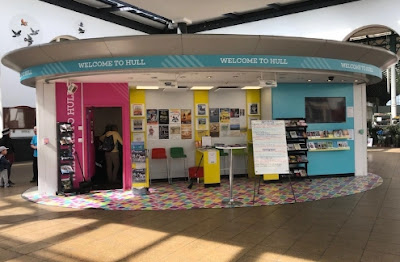 ... which did make you feel "welcome to Hull". But from a bus point of view the best news was two small but beautifully formed enquiry cubicles for the two bus operators. 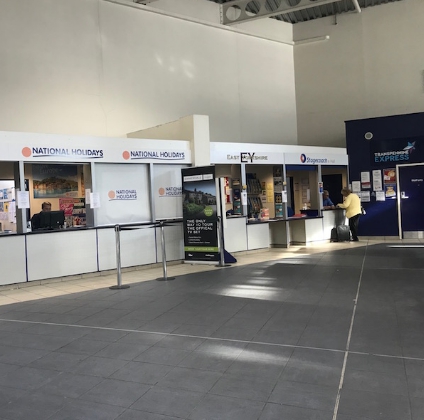 Roger also found the two timetable leaflets a useful facility - if a little unweildy when opened out; not ideal for finding your bus is the teeth of a Humber Estuary gale! 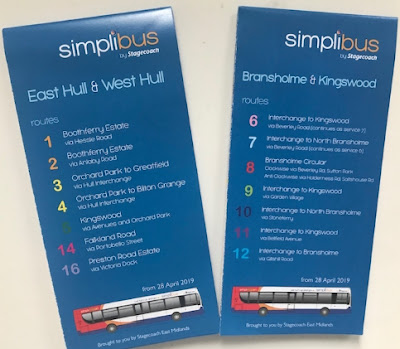 Of course all this was BC; the situation today is very different.

National Holidays has gone completely and the GoAhead East Yorkshire office is non-operational ... 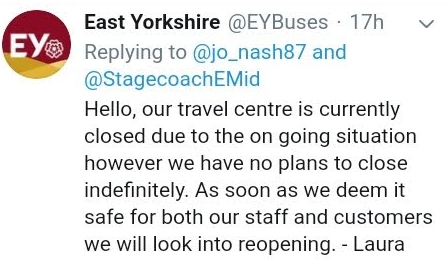 ... but Laura does insist that it will be back.

But as for Stagecoach ... 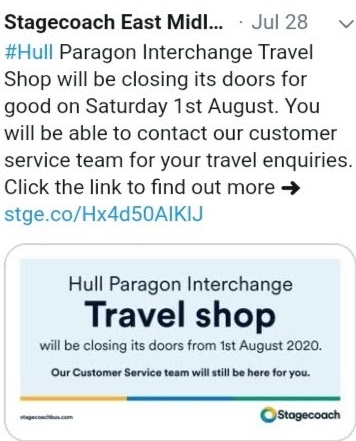 ... permanent closure! How daft can you get?

This is the best public transport interchange in the country. It is an ideal hub in which to encourage bus travel, either as interchange from train or for folk coming in off the street. So (a) you take away their chance of obtaining information from a person and (b) you encourage them to see if travel is available with "the competition".

In some ways Stagecoach makes it worse by telling their customers of all the "convenient" (?!) places where they might find out when and where the buses run. 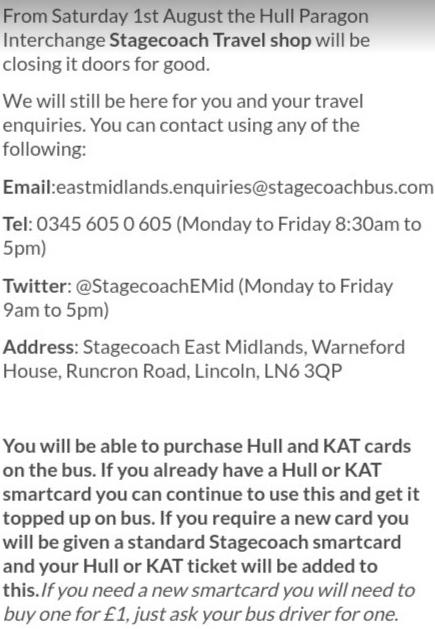 At which of these facilities will Stagecoach "still be there for" customers requiring one of the timetable leaflets?

E-mails can easily be ignored (and often are) in a busy office.

The phone number is a "national" number at local call rates, but who knows where the answerer may sit. Aberdeen? India? Lincoln? Bedford? Exeter?

fbb will try ordering leaflets via Twitter and will report back in due course.

Or maybe the potential passenger will get on his bike and cycle the 50 miles ... 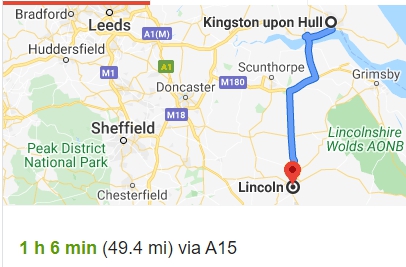 ... to Lincoln and knock on the door of Warneford House. 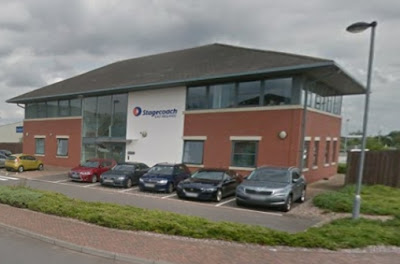 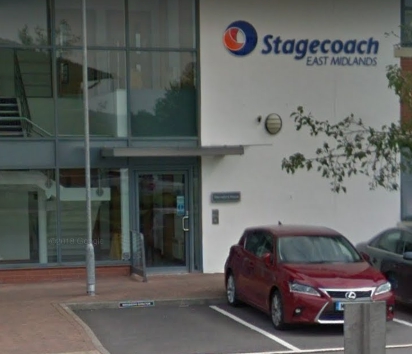 Stagecoach please note: this closure is ...

Note 1 : Uncle Travelling Matt was a character in "Fraggle Rock", a fraggle who travelled the world and sent postcards back to the fraggles in their den underneath St Mawes lighthouse. 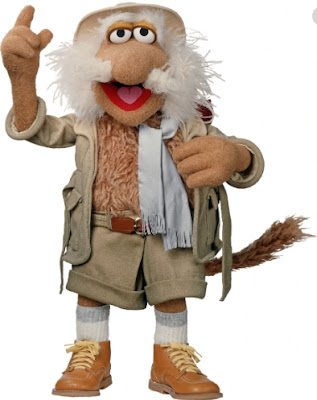 You must remember the programme.
"Travelling Matte" (with an "e") is a special effects technology which adds a picture behind moving actors; it is similar to Colour Separation Interface, a k a Green Screen (once Blue Screen) aka Chroma Key and other brand names as used in television, e.g to put a weather map behind a weather presenter.

fbb is certain that all children who watched Fraggle Rock will have understood the technology "joke"! 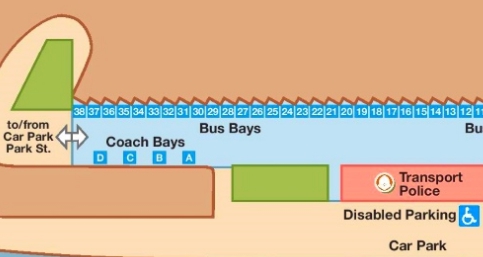