It's Not Our Problem, Mate! 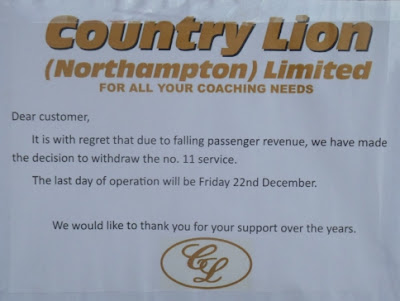 The forthcoming withdrawal of Country lion service 11 to Links View Estate in Northampton has provoked the usual outrage. The local press published all the usual stuff. 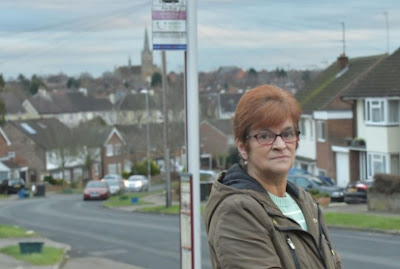 One resident, Jeanette Chapman, 72, of Links View will not have access to this service after December 22 and says she will have to consider moving house because she can not afford to pay for taxis to travel into the town centre. Jeanette looks forward to getting out of the house twice a week and uses the bus route on a Monday to go shopping and on Fridays she enjoys meeting her friends for a coffee.

But, of course, therein lies the problem. "Getting out of the house twice a week" does not bring in enough cash to pay the bus company's bills.

She added: "I'm absolutely gutted, as far as they are concerned, we don't exist in this area. We might as well be on a desert island."

She is absolutely right. Links View is, effectively, a desert island for bus travel. It is on a road to nowhere.

fbb well remembers exploring this area before development. There were splendid bike rides along bridle paths across "open country" including one particular stretch that ran steeply downhill between high hedges.

Part of the open land was (and still is) a Golf Course which, long, long ago provided Northampton Corporation with a problem. 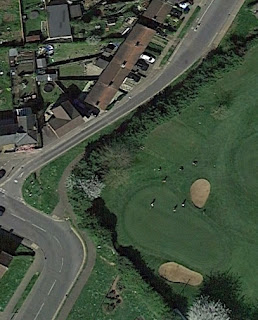 Eastern Avenue South should have run in a straight line top right to bottom left. But the corner of the prestigious Kingsthorpe Golf Club's land was in the way. Roughly 70 years after the estate was developed the wiggle is still there because either the Golfers won't sell ... 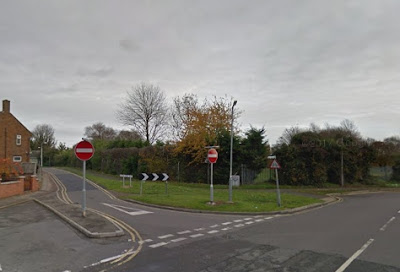 ... or the Corporation refuses to buy! 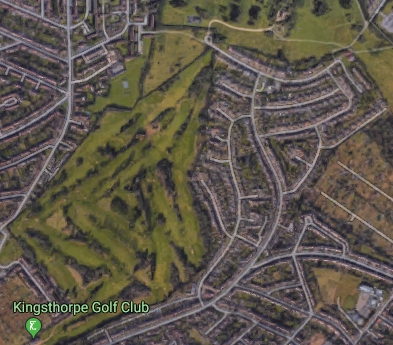 Links View was always doomed to be a minor intrusion into the open land. 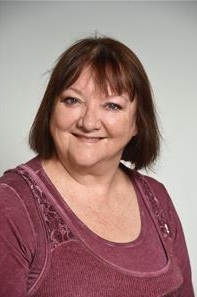 Councillor Cathrine Russell (Lab, Kingsley) is hosting the public meeting on Thursday (December 7) at the Pioneer Public House in Hazeldene Road at 2.30pm. She said: "This outrageous situation is completely unacceptable. This is why I am calling a public meeting and asking residents to come along to find out what we can do to ensure we get the public transport we need in this area."

What you can do, Councillor, is persuade some more councillors to find the cash to run a tendered service of largely empty buses six days a week. Unfortunately our Cath is a Labour councillor on Conservative dominated Northampton Borough Council and the transport authority is the County Council, also Conservative.

"The only way Links View residents will have access to public transport is to walk through Bradlaugh Fields to either St Davids or Kettering Road in the dark and through winter conditions. Alternatively they could walk the one and a half miles to Kenmuir Road, over a rather steep hill."

Not quite, dear Councillor. There is a footpath, about 100 yards long, from the outer reaches of Links View (aerial view below bottom left) through to Stagecoach service 10/X10 at Parklands. 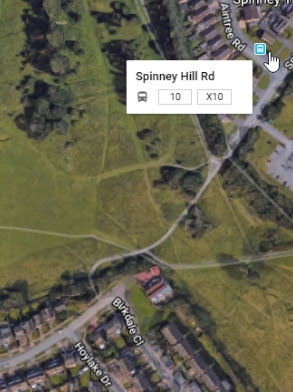 There is no need to walk to Kettering Road or, in the other direction to St Davids Estate. Neither would many be walking "in the dark" to catch a bus from the present timetable!

There is a Kenmuir Road in Finedon and one in Cardiff; but no such thoroughfare in Northampton. If the good (but apparently ill-informed) councillor means Kenmuir Avenue, then its bus service is the service 11, the one, she may recollect, that is to be withdrawn.

"I have invited the county council, several bus companies and other interested parties to attend this meeting and hopefully we will be able to find a way forward. I will do everything I possibly can to have a bus service reinstated in my ward of Kingsley."

Paul Shaw, transport manager for Country Lion Northampton said: "Currently we are making a considerable loss on the service daily. We have to rely on fare revenue to pay for the service. The current daily income does not even cover the fuel cost."

Surely it would focus people's minds if you gave us the actual figures, Paul (Shaw, not Daniels). And what do you mean by "daily income"? Does it include money from the council for OAP pass use? Without the figures our readers may suspect a bit of statistical manipulation.

One suggestion bandied around is that Stagecoach should divert some or all of its route 10/X10 via Links View as well as via Parklands. 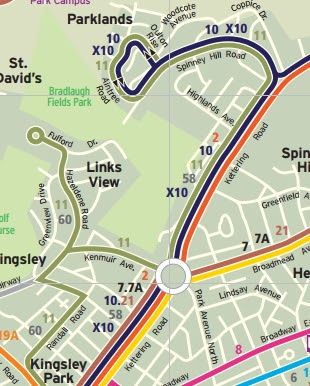 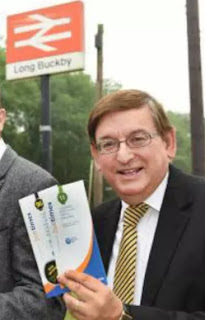 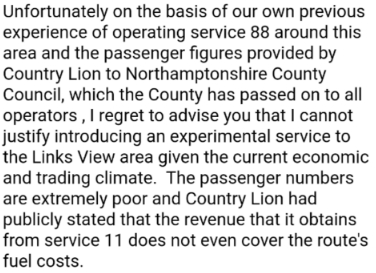 ... and of a lost opportunity.

If we take another look at the map we can see that Spinney Hill Road and Fulford Road were planned as a through route. 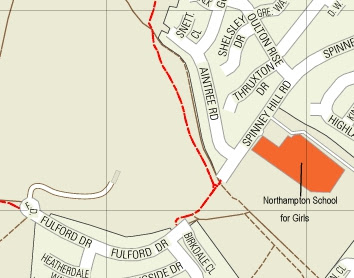 For a whole raft of short-sighted reasons it never happened - and there will be even more reasons why it never will; one of them being the private drive to a house built on the line of the road! 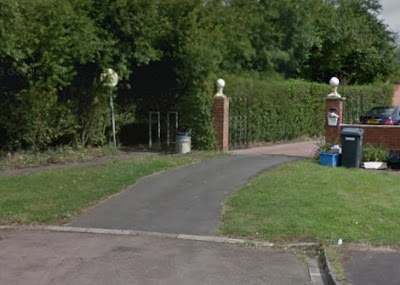 But a bus only "wiggle" would be possible. As that would be a "capital" project it could come out of the highways repair and improvement budget.

It won't, of course, because providing a bus for a few occasional users in Links View will not win enough votes to make it worth while.

Alan (Northampton news-hound) reports, as expected, that the Public Meeting was a Pointless Meeting.

I really feel their cause is lost. There is no one with any idea of how to proceed.

They have filled in the usual petition, but then so has every other anti cuts group in the county and they all started six weeks ago.

It is a comparatively small area with not enough bus passengers, and a cobbled up service with insufficient publicity.

They cannot understand why Sir Brian does not wish to send service 10 up to Links View. (He's got the loadings data from  when he did it with the 88)

And, more importantly, no one is prepared to find the money.

Is the really the right way to run our PUBLIC transport? 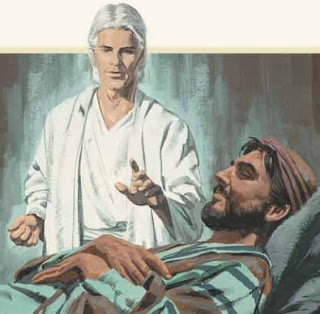 This was how the birth of Jesus Christ took place. His mother Mary was engaged** to Joseph, but before they were married, she found out that she was going to have a baby by the Holy Spirit. Joseph was a man who always did what was right, but he did not want to disgrace Mary publicly; so he made plans to break the engagement** privately.

Matthew suggests that the experience was "inside his head", but still very real.

While he was thinking about this, an angel of the Lord appeared to him in a dream and said, “Joseph, descendant of David, do not be afraid to take Mary to be your wife. For it is by the Holy Spirit that she has conceived. She will have a son, and you will name him Jesus - because he will save his people from their sins.”

Jesus was a common-as-mud name, the equivalent of our Joshua. In Hebrew the name means "God saves".

But Joseph had no sexual relations with her before she gave birth to her son. And he named him Jesus.

Oddly, we never sing hymns or carols about Joe's experience; but Mary's explosion of faith and praise in response to her Angelic revelation has been part of Christian worship almost for ever.


Tell out, my soul, the greatness of the Lord!
Unnumbered blessings give my spirit voice;
tender to me the promise of his word;
in God my Savior shall my heart rejoice.

Tell out, my soul, the greatness of his Name!
Make known his might, the deeds his arm has done;
his mercy sure, from age to age to same;
his holy Name--the Lord, the Mighty One.

Tell out, my soul, the greatness of his might!
Powers and dominions lay their glory by.
Proud hearts and stubborn wills are put to flight,
the hungry fed, the humble lifted high.

In many traditions it is called the Magnificat.

Mary was praising God in the only way she knew - by reciting a memorable passage from her "bible", our Old Testament book of Samuel.

** Engaged/Engagement is not a good translation. "Betrothed", in the Jewish culture of the day, was more like a "trial marriage". Being pregnant before the due ceremony would normally mean that the woman would be literally thrown out.
=================
Next Omitted Oddments blog : Sunday 10th December
Posted by fatbusbloke at 02:00