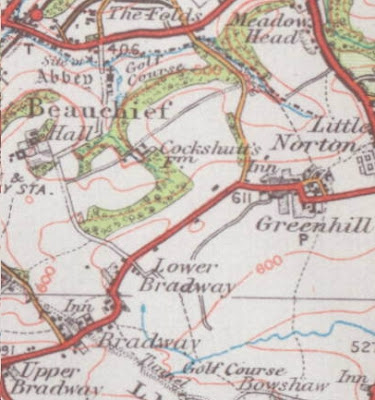 The Bradway district of Sheffield has had something of an identity crisis over the years, not least when its buses are considered. Administratively the district of Bradway covers a wide area ... 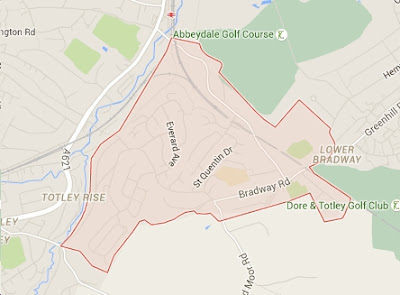 ... from east of the river Sheaf to the boundaries of posh pads on Twentywell Lane.

But the real Bradway was clustered round the top of the Lane, just a tiny chunk of the area greyed (sorry - pinked) in the above map. Here was a shop ... 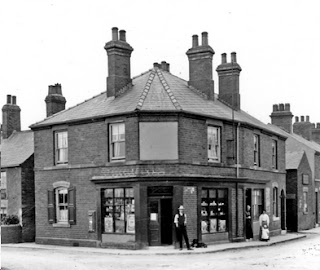 ... still there but no longer selling groceries! 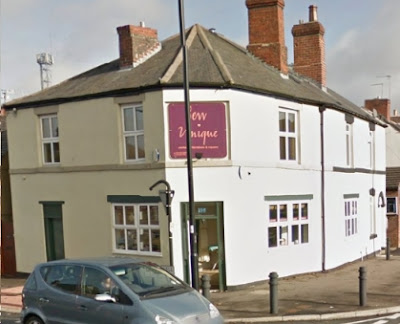 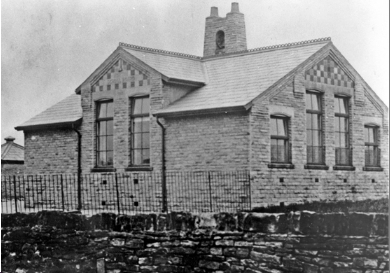 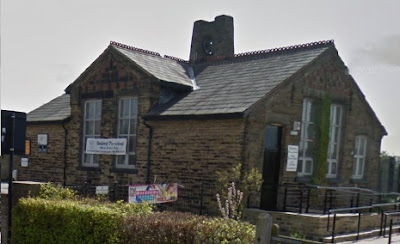 The Bradway Inn (once the Miners Arms) has changed a bit ... 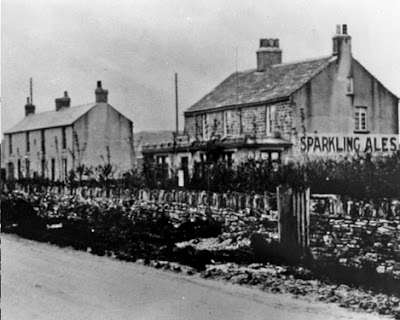 ... being for sale when Google Streetview viewed it. 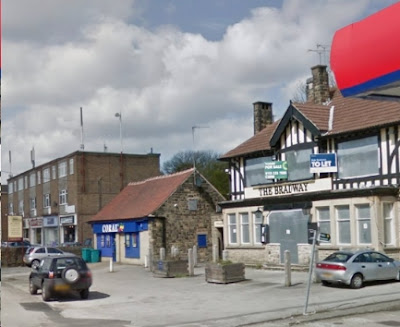 The hotel is to be demolished and replaced by a "Sainsburys Local" supermarket. Midland Cottages have long since gone, their place taken by an architecturally inferior 1960s shopping terrace. From memory, and in the past, fbb has stopped there on many occasions to visit the chippy after delivering Bible Class members back to their homes!

And at "Lower Bradway", the lodge of the Beauchief Hall estate ... 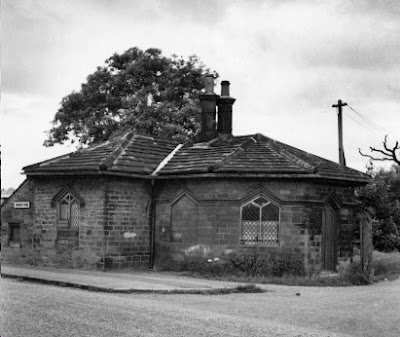 ... still stands and is still occupied. 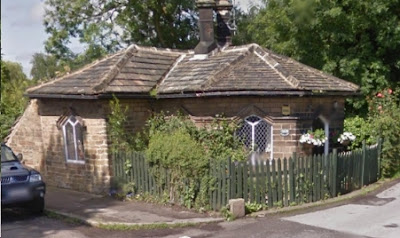 Even as late as the 1930s, these communities were remote settlements linked to the city by "country" bus routes.

Sheffield Tramways and Motors (i.e. Sheffield Transport) bought out the business of Mr Glossop which included a bus service via Millhouses and owler Bar to the village pf Holmesfield. It gained route number 46 but was soon abandonned in favour of a route via Meadowhead and Bradway.  (Service 22).

Service 22 adopted its familiar route via Abbeydale Road, Archer Road, Hutcliffe Wod Road, Bocking Lane and Bradway; but remember (how could you forget) that this was the real bradway as expounded by fbb above. 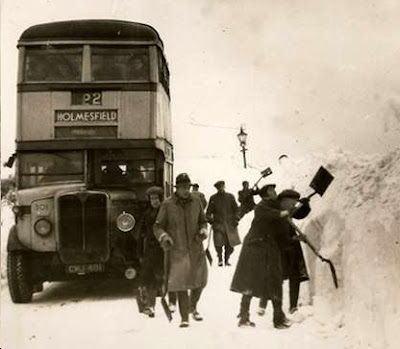 A new service began (numbered 86) via Bradway to Dronfield Woodhouse continuing via Stubley and back to Sheffield via Chesterfield Road. This operated 9 journeys each day (5 on Sunday) but in both directions. By this date, extra 22s were running to Bradway (Golf House), i.e.opposite the Bradway Hotel. 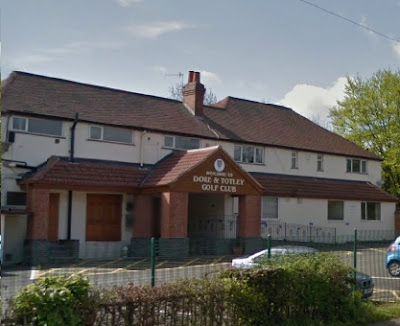 In 1956 the 86 was revised to run via Bocking Lane, Meadowhead, Stubley, Dronfield Woodhouse and on to Holmesfield to augment the 22. 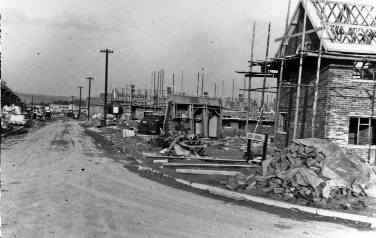 ... which ran parallel to Hemper Lane, the "main road" to Bradway. 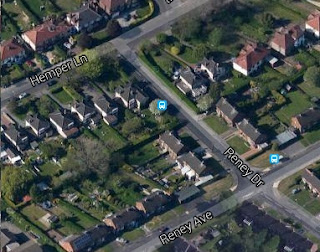 Two years later this route was extended via Reney Drive, through the real Bradway and down Prospect Road at "Upper Bradway" (aka Tinkers Corner) to terminate at a reverse into Wollaton Road. 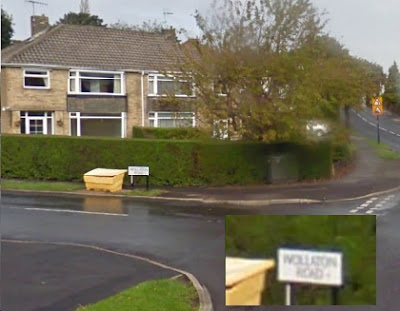 Sheffield Transport referred to this area as Bradway Bank, but buses still showed the traditional "Bradway" on the blinds.

This brief and somewhat expurgated history takes us the the point (early sixties) when a keen and alert student who later became f and a bb arrived in Sheffield. One small piece of the jigsaw needs to be added. A new "council" estate was developed on the southern edge of the city called Low Edges. 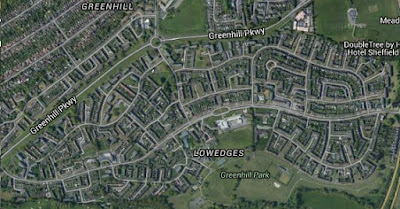 It was designed using the "Radburn" principles which sought to offer residents a safe and largely traffic-free footpath route to local shops and bus services.

This estate was given its very own bus route (38) via Chesterfield Road which started in 1954.

We will summarise all this in a simple (?) fbb map, drawn in the style of later Sheffield Transport bus maps ... 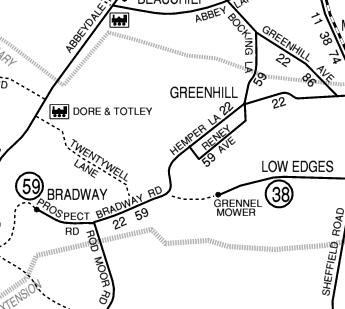 ... and bring the story up-to-date tomorrow.

Tim Dodds from Go North East said: "It's a simple fact that the local authorities simply can't afford to run this bus contract scheme. Inside 10 years this scheme will bankrupt the bus system."

The Quality Contract Scheme (QCS) Board has published its report (Tuesday 3 November 2015) on the proposed Tyne and Wear QCS. The report contains the board’s opinion on whether the scheme meets the public interest criteria and concludes that:

· Nexus failed to comply with the statutory requirements on consultation

· the proposed scheme does not provide value for money

The Board does however suggest,

In the voluntary partnership agreement, Nexus can be proud that it has led 3 bus companies to put forward a proposal that is in itself novel and groundbreaking, with the makings of potentially effective governance allowing local citizens real influence over their bus services.

So Nexus (another disguise for the PTE) has got its sums badly wrong. And, of course, wasted loadsamoney from Council Tax revenues. We are all so surprised.

On Tuesday, fbb asked how a passenger might get to Birley Lane bus stop as the timetable for new service 8/8A only offered only a few journeys.

Little did the chubby one think that a First Bus driver might try to get to the very stop by driving along the tram track! 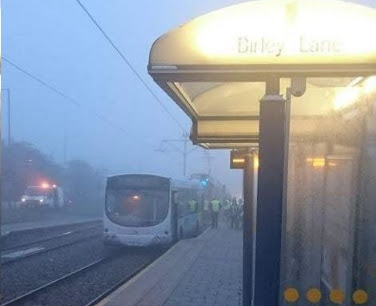