The return of the whistle blower?

How many passengers were there?

Once upon a time, back in the age of the dinosaurs, Sheffield Transport ran an extensive network of night services.   Last buses on "normal" routes left city centre terminals at 2315.  It was like a "Le Mans" start because vehicles were not allowed to leave until the Inspector blew his whistle.  Then, on most main cross-city services there were three further departures at 2345, 0030 and 0130.  By 1981 there were still 13 routes running every night, followed by early morning trips on most main services at 0330 and 0400. 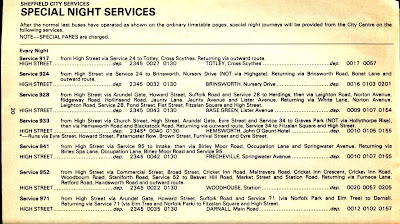 Such services faded away progressively after that and eventually disappeared altogether being a victim of the dreaded privatisation and commercialisation.   Until now, that is!!

Will they be popular?

Well, they might be - if anyone knew they existed!   There was no online information until Friday 19th and no printed material had appeared by Saturday 20th.   Traveline denied all knowledge of the service on Monday 22nd.   So loadings were probably very light for at least the first two nights.  Travel South Yorkshire might actually wonder why.   And TSY couldn't quite get publicity out, but someone (privately) managed this on Facebook on 16th November.   Insider dealing, maybe.

How not to run a bus service.

One little crumb of comfort - fbb attempted UNsuccessfully to collect leaflets on Saturday morning 20th from the Arundel Gate enquiry office BUT a very, very nice man behind the desk offered (unprovoked) to print out a set.   Now that is good service.

The leaflets are very helpful (NOT!) with - for example - a "list of stopping points for service N1"; except that it omits over half the stops.   And it shows roads which don't have stops on them.   And it shows several district names in totally the wrong location.   And it claims that the route serves Southey Green and Sheffield Lane Top; which it doesn't.

[the bits highlighted by fbb in yellow are, at best, less than helpful.] AND the front cover shows that the service runs via Ecclesall (WRONG) rather than Ecclesfield (RIGHT).   Ecclesall is about 10 miles southwest of Ecclesfield - so not VERY wrong, Eh?  STOP PRESS :  on line version corrected by Wednesday 24th, Ecclesall now Ecclesfield; only the "Stopping Points" to sort out now! 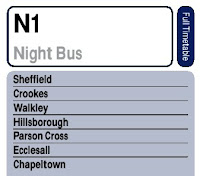 Apart from that it's very helpful!

STOP PRESS (AGAIN!) - anecotal evidence says that 15 people travelled on the nine trips on the early Saturday morning journeys on 20th November.   That's revenue of £27.50 for three buses, three drivers and a total of (say) 15 hours work.   Not the most profitable business enterprise, as yet.