Why be horrid to London?

Fat Bus Bloke occasionally gets challenged about Transport for London [TFL] Bus information.   Surely there are timetables on line and at every bus stop?   Anyway buses are so frequent that it doesn't matter.   Really?   So let's take a typical example; service 67 from Aldgate to Wood Green on a Saturday daytime. 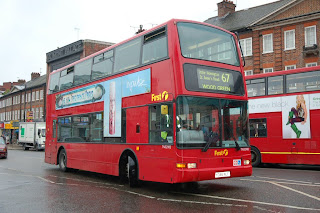 And here is the so-called "timetable" available on line and at the stop in Aldgate.  Notice that it does NOT even tell me departure times - I have to guess from the impossible "about every 9 - 13 mins" line.   Above the "timetable" is a line diagram of the route giving "off peak" running times (showing the number of minutes of travel time from Aldgate to each stop).   So having guessed the next departure, I then need to guess again as to whether I am travelling off peak or not.

Of course the 67 does run to a timetable, and here is an extract - the big secret that TFL doesn't want you to know.  The fact is that the 67 runs every 10 minutes for MOST of the 0800 to 2000 period but with significant variations in the time taken to traverse the whole route.   If a real timetable were to be published, rather than be subject to some sort of London Official Secrets Act, then I could work out when the next bus departs and how long my journey might take.   Now there's a novelty!

This (presumably) computer generated nonsense can lead to some appalling and potentially disastrous misunderstandings for the long-suffering public.   I am at Epsom Hospital and I see I can catch the 406 towards Kingston. 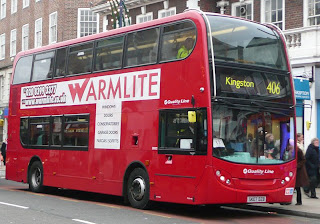 What does the helpful "timetable" tell me?

Now what does that mean?   Don't bother with the intellectual gymnastics; the 0806 and the 1540 are the ONLY departures from the Hospital.   There are half-hourly buses from the centre of Epsom, but without a real timetable (as opposed to a TFL "timetable") I would never know.  I suppose I might simply have to wait up to 7 hours and 30 minutes if I missed the 0806!    To add to the sorrow, missing the 0806 is easier than you think because these journeys only run on schooldays!   TFL doesn't seem to know that.

My son (and he's 35 and a leading computer thingummy at Oxford University - so not thick!) says he simply adds an extra hour to any cross London journey because he can't find any way of getting the times right.   If he is on business, then that is presumably an hour's extra pay - probably indirectly from my taxes.   Cone on, Boris, PLEASE let us know the secret of London Bus Timetables!