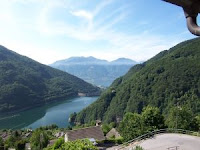 A "Great Rail Journey" holiday took us to Locarno, where we were able to enjoy a "free" day. My wife took herself off to the old town and the shops whilst I was able to sample an unescorted swiss bus ride. The operator, delightfully named FART (being the train and bus operator for the Ticino region of Switzerland), had excellent publicity and I chose a trip to Mergoscia which appeared from the route map to be at the end of a road to nowhere.
And what a road!
It all started quite conventionally through the Locarno suburbs and then we started to climb. And how! The road became narrower and narrower - often barely wide enough for the medium-sized single decker which was packed with walkers and their rucksacks. I felt under-dressed without hiking boots and anorak! In places there was nothing between us and a precipitous drop to the valley floor and huge lake below. No barriers! Then there were the sharp corners - so sharp that the bus had to jiggle backwards and forwards to get round, with the rear overhang - well, overhanging NOTHING! (and I was sitting at the back and often OVER the edge.)
In places the road had been so narrow that new alignments had been blasted through solid rock. There were many corporate gasps of excitement tinged with fear as we progressed, at significant speed, to the little village, literally, at the end of the road. On the rare occasions when we met a vehicle coming the other way there was much shuffling and reversing and holding breath as a coat of paint often separated us from them.
So thrilling were the views and the ride that on arrival at Mergoscia the whole bus burst into impromptu applause for the driver - who was somewhat bemused by the accolade. The driver disappeared for his break, leaving the vehicle open (of course) for me to enjoy the views in comfort - and soon we were off back down. I think "down" was more terrifying as the only views were down the valley and over the edge.
Obviously we simply cannot match Swiss scenery in GB - but are there any candidates for spectacularly thrilling bus rides here?
Incidentally, I took this journey back in 2003 and the timetable and route are largely unchanged today.
Posted by fatbusbloke at 14:37