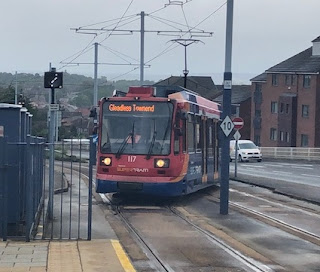 The tram replacement service referred to in yesterday's blog has been publicised at tram stops by the South Yorkshire PTE. Sadly this uses sheets of yellow paper encased in thin plastic. 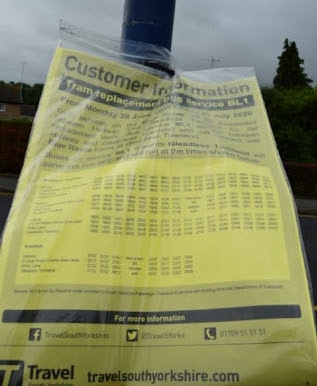 Experience shows that these do not last, either removed as a jolly jape by Waterthorpe youff or blown off by a brisk South Yorkshire breeze. Idea (no consultancy fee required!) - why not put then INSIDE the timetable frames?

Destination screens in the buses are good ... 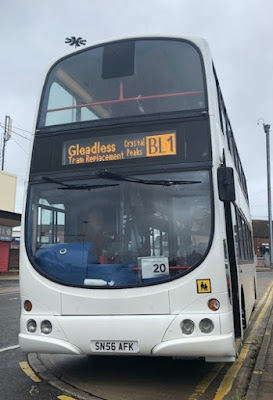 ... with side screens correctly set up as well. 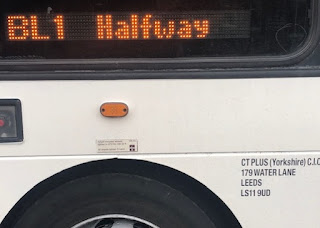 The buses have come from fellow C T Plus business in Leeds. 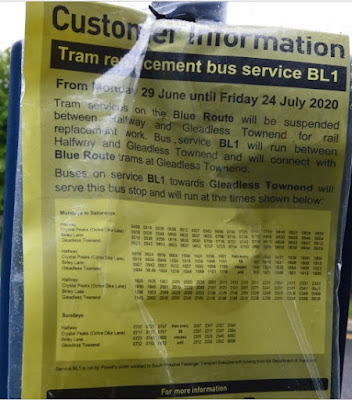 One mystery is solved, however. These timetables differ from that published on the TSY web site. The non-existant "Waterthorpe" place names ...

... are gone, replaced with the more sensible Crystal Peaks.

Generally passenger numbers were less than minimal. But, as the tram line has been closed since June 6th, people will have adapted. Indeed, unless you regularly trawl on-line you might not even know the bus service had appeared. The posters are at tram stops which have had no service for four weeks - so why would you go there to look?

One correspondent reported that potential passengers were uneasy about travelling because it looked as if the BL1 service was limited stop. in fact it calls at or near all tram stops en route.

But how would you know? This is a picture of the timetable frame at Gleadless Town End tram stop. 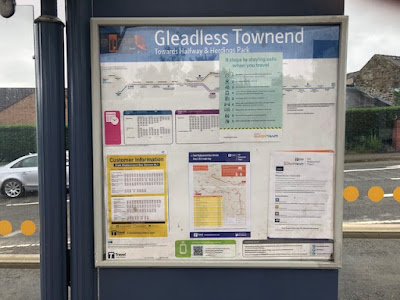 There is a "stay safe" (NINE steps) poster partially covering the (wrong?) timetable on BLUE paper, the replacement bus timetable with the YELLOW border, a general explanation of tram services on WHITE and a small multicoloured map. (click on the pic to enlarge it) 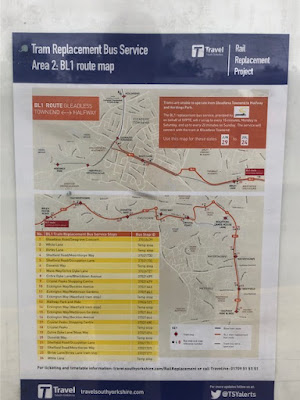 IT actually lists all stops served by bus BL1. Excellent, but it is far too small, barely legible behind a dirty glass. fbb has not found this map on either the PTE or the Supertram web sites - so it ISN'T ALL on line.

As usual with the PTE/TSY it is all a bit of a mess.

What is needed is one simple poster, timetable and map, filling the frame so people spot straightaway what is going on.

Of course it would have helped enormously if the replacement bus has started running when the trams stopped rather than four weeks later.

No, it is a really BIG mess.

Thanks to Roy and Matt for the pictures. They have been out and about on the first day of the replacement bus service.

P.S. Roy reports that the yesterday's on-tram recorded announcement about the disruption said there were NO REPLACEMENT BUSES. 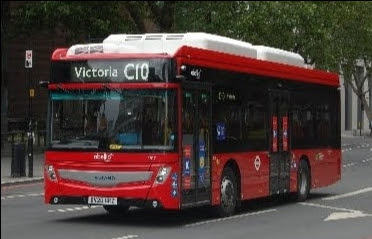 ... originally ran from Victoria via a "back street" route to Elephant and Castle. It began in 1991 and has "enjoyed" a number of operators over the years ... 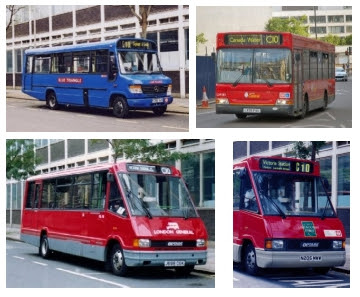 ... but is now in the hands of the government of the Netherlands. Later extended to Canada Water is does a full tour of the former Surrey and Commercial docks. 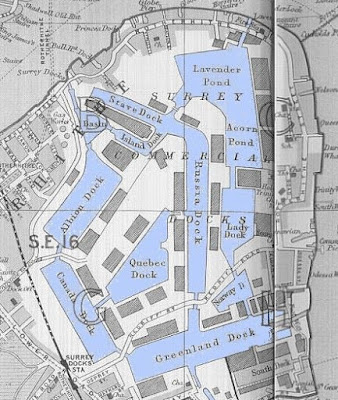 Many aeons ago, a teenage fbb, accompanied by Alan from Northampton, rode round in a flat fare single deck P2 ... 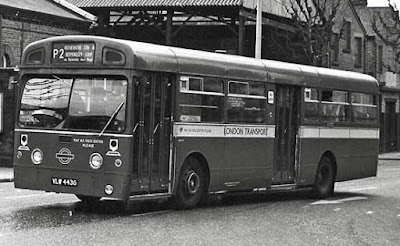 ... on a similar circuit; but back then the docks were all still there, but moribund. 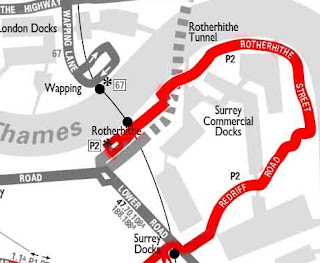 Now only the Greenland Dock and the South Dock are still wet. 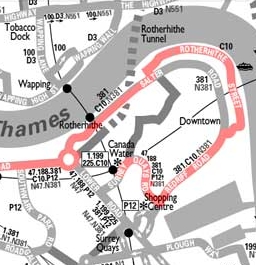 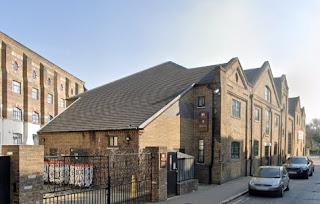 This (below) was a few years before fbb's visit! 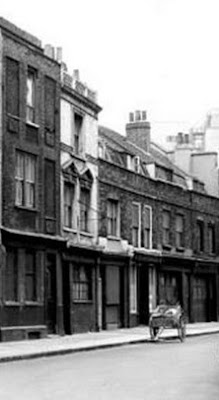 Abellio have also assumed responsibility for the P5. 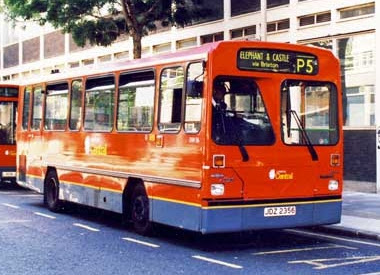 Formerly with GoAhead London Central, Abellio took over as recently at 2nd May 2020. 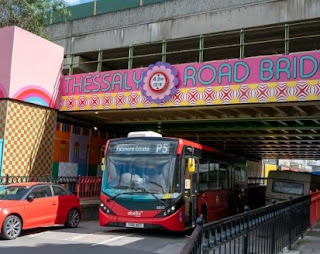 Its route is entertainingly wiggly between Elephant and Castle and Patmore Estate. 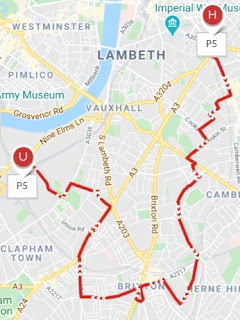 For those, like fbb, for whom Patmore Estate is a complete mystery, this aerial view (Google Earth) will explain all. 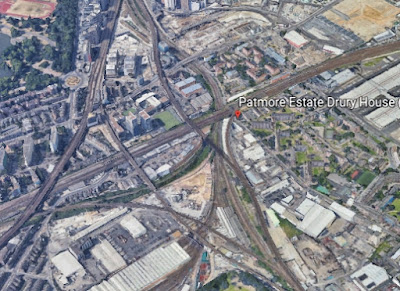 Clapham Junction is just out of shot lower left, Waterloo ditto upper right, and Victoria upper left. For the record, and zooming in ... 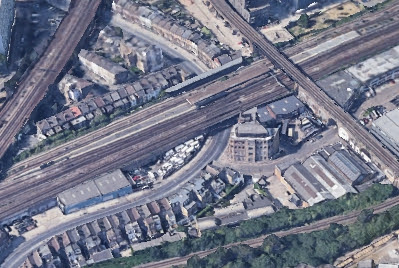 ... the nearest station as the fly crows might well be Queenstown Road Battersea, although how (whether?) you get between the two is beyond fbb.

But the newest takeover by Abellio (from last Saturday night!) is the 285 (click on graphic to enlarge). 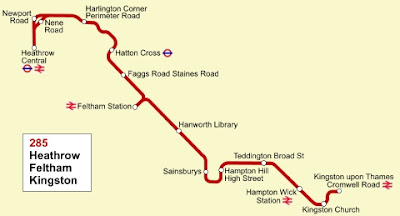 Abellio are dead keen to tell you (via Twitter) what a wonderful experience this will be ... 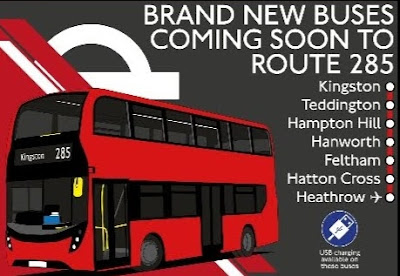 ... but whether most Londoners will notice - or care - is doubtful. 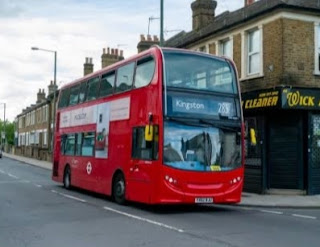 What they're getting from last Sat looks fine to fbb. 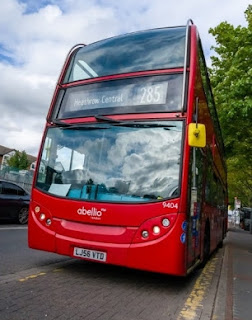 Stay Safe - A Question
At which of these stops would you feel most safe when waiting for your bus?
Number 1? 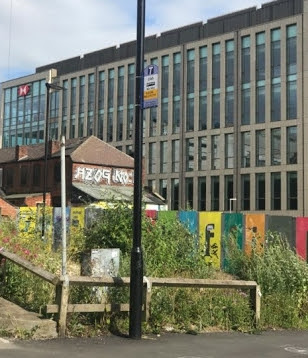 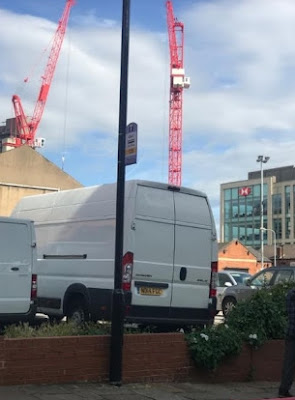 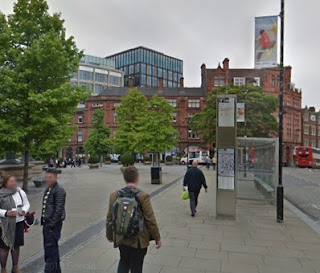 Answers, please, to Sheffield City Council who have removed all the buses from 3 and put them in a poor quality, ill-lit backstreet, 1 and 2.

And Where ...
... might this rather battered Travel South Yorkshire dolly stop sign be located? There is a clue. 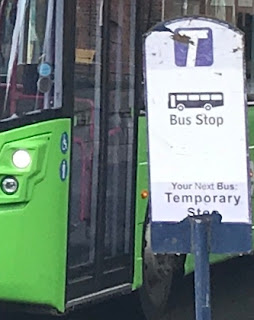 ... when we return to Burton upon Trent.

The promised Porthmadog and Manchester items will appear later.