Streaming of the Steaming ...

In yet another blogging change of plan, fbb decided, yesterday, to watch the live streaming from the Festiniog's Boston Lodge Depot of ...

... lighting the fire in the refurbished "Welsh Pony" locomotive.

Only the video wouldn't stream, so the old man dipped into the recording of the steaming a while later.

A diddy diesel engine chuntered into the engineer's shed and coupled up to Welsh Pony ... 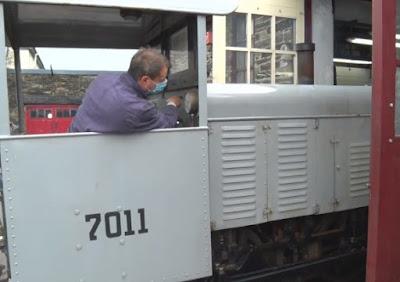 ... the next we saw was said historic engine parked in the yard. 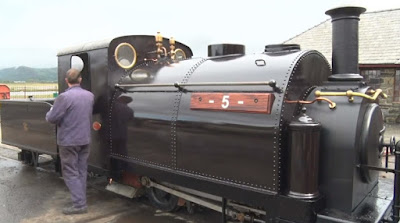 For kindling they were going to use this bag of bits ... 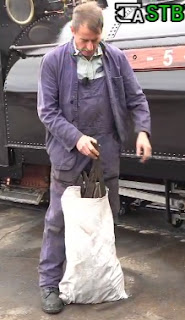 ... laths of timber which formed the original cladding round the Pony's boiler ... 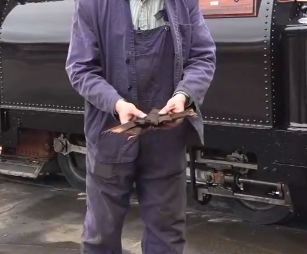 ... more like strips of burnt wood! A nice thought, but probably insufficient to get up a head of steam.

A celebrity had been engaged to light to fire, young Millie, the daughter of one Paul Lewin, GM of the Festiniog Railway and the "presenter" of the steaming streaming. 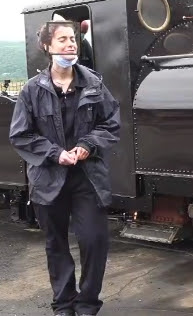 The box round her face was not a covid19 screen but a strange feature of the video camera set-up. She did wear a mask - in the normal position, below the chin.

There followed a lengthy sequence of views of Millie's pert but overalled posterior accompanied by the sound of striking matches.

Apparently, lighting matches in the teeth of a wet Welsh gale is a common problem at Boston Lodge.

fbb counted 27 strikes before the excitement was just too much for his increased blood pressure and he moved the video on.

In the "good old days of steam" a traditional firebox starter was a shovel full of oily rags, but the Festiniog lacked oily rags (no doubt banned under some potty health and safety regulation) and so assembled a small heap of clean rags to which diesel oil had been added. 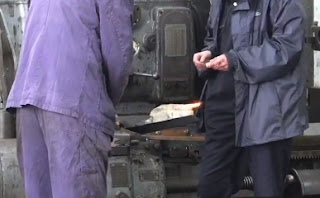 On the third attempt, Millie's matches made the magical mystery of oxygen consumption and carbon dioxide expulsion (plus heat) materialise and the man gingerly carried the flaming shovel back to the Pony. The wind did not blow the fire out this time nor did a passing downpour dampen the mini conflagration. 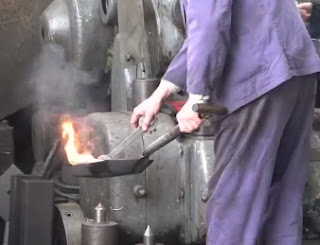 Alas, the camera did not record the actual firebox ignition but the appearance of smoke from the funnel confirmed that the fire was successfully ablaze.

Time elapsed from roll-out, approximately 25 minutes. fbb would have been drummed out of Weston Favell scouts if he had taken that long to get a fire going! (Actually fbb never even attempted to light a fire for the scouts but did enjoy the occasional crunchy black burned potato in his back garden.)

Next scheduled streaming was at 1300 when a ceremonial and almost unbelievably exciting "toot on the whistle" was scheduled.

At the very same time, Andy Murray's semi-final tennis match in the Best of Brits tournament was due to kick off with Mrs (Scottish) fbb rooting for her racial compatriot.

But in Porthmadog it was raining - teeming no less. (See yesterday's blog.) 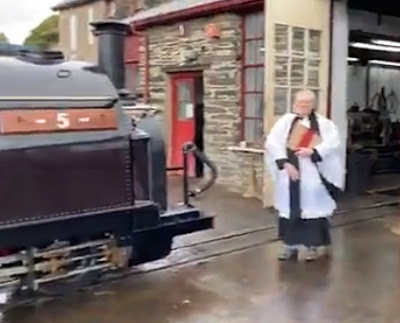 Enter the vicar, his frock swirling in the tempest!

But Welsh Pony was ready for its first public performance. Sadly video stills do not come with sound, but the whistle was whistled loud and long. 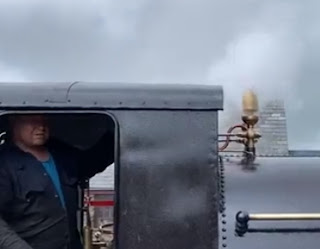 The vicar's job was to bless the loco, a Festiniog tradition, and as he began his short speech, Welsh Pony decided to add a few words of his own (her own?). Steam hissed loudly from every available orifice ... 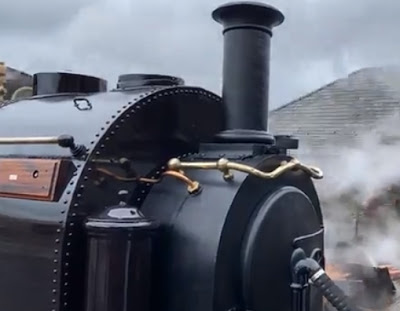 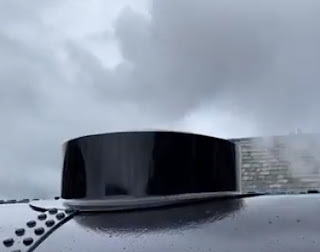 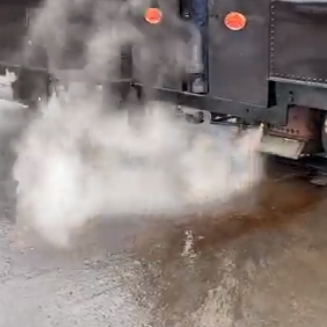 ... such that it was quite hard to hear his Reverence's holy incantations. 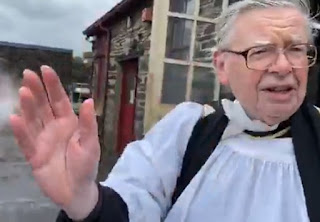 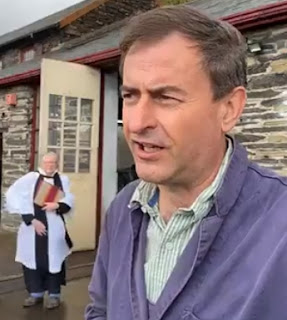 ... retreated sesnsibly into the shed, our noble presenter dispatched the camera person into the cab to have a good look at the various dials, levers and valves needed to drive the beast. 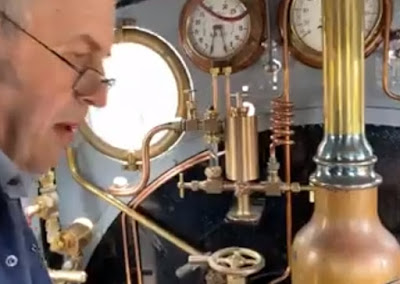 You must wonder how long it will be before steam engine gunk begins to darken the copper and brass thingys.

The restoration of Welsh Pony, which for many years languished on a plinth outside Porthmadog station ... 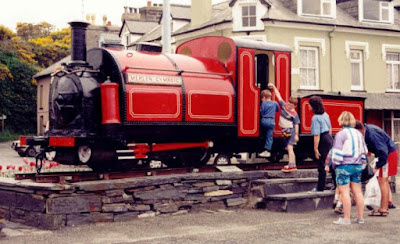 ... has been a real labour of love and a labour of much fine gold; but the results are truly magnificent.

At 1600 the venerable old Pony was due to move under its own steam, the first time for 80 years. Ironically, his Reverence, Dr Richard Buxton, long term member of the Festiniog glitterati, has just celebrated his 80th Birthday ... 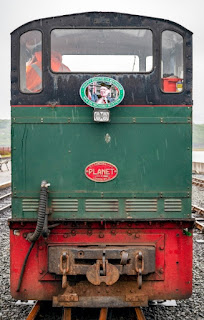 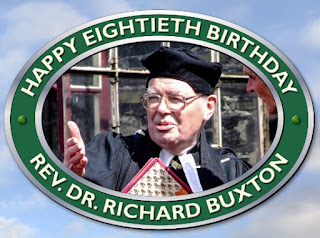 He also had a local beer named after him for his 70th birthday. 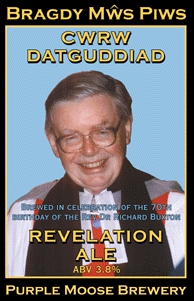 Andy Murray lost the semi final to the UK No 1 Dan Evans after a 10 point match tie-break.

And so, a little after 1600 (typically running a little late) Welsh Pony goes on a trundle along the track - and she/he performs faultlessly. 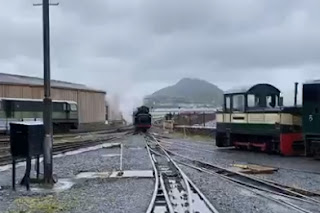 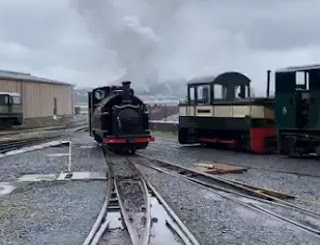 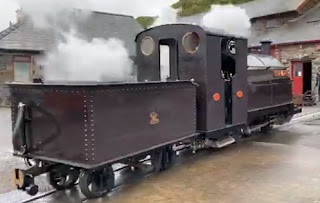 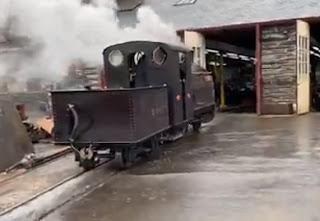 Yep. A lovely lively mover; and just a poor video of a snatch of the video videoed (badly) on fbb's phone.
Or you can watch the historic first run under its own power (here) - approx 19 minutes, so grab your own glass of cwrw datguddiad, sit back and enjoy.

But, even better, Toby trundled, rather hesitantly, over some of the Peterville pointwork - the first powered run since this time last year.
A trial run on Friday was a total failure as nothing would run - even hesitantly. Yesterday fbb discovered the reason. The wires that take the electric to the track had become trapped in the under-baseboard junk and had become, to use yet another technical term, busted. Thankfully a technically savvy fbb realised that if there is a gap in the wire, the electric won't get through. Skillful eh?

After a bit more track cleaning, and with some dry fine weather, it should be possible to run trains properly.


Next Variety blog : Monday 29th June
Posted by fatbusbloke at 02:00