Surprising Snippets from a Saunter to Sheffiel (2)

Via a Viaduct. Beauty (?) at Bennerley. 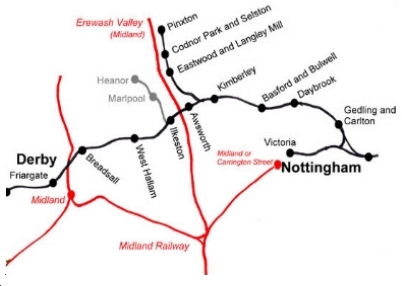 The Great Northern Rail Derbyshire and Staffordshire Extension (snappy name eh?) tends to be known as the Derby Friargate line, because, oddly, the only station of significance was Derby Friargte. Amazingly Friargate (the station) was close to Friargate (the road) and, to this day the bridge remains. 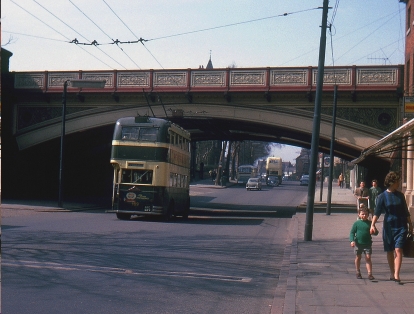 The GNR didn't make it easy for themselves. Whilst the Midland Railway struck north via the Derwent and Erewash Valleys, the GNR needed to cross over them and at significant height. A viaduct crossed north of Derby Station which was blown up in 1979. 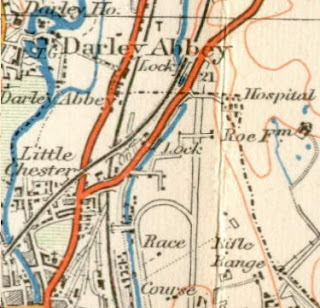 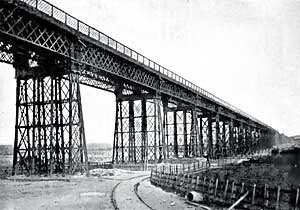 Unusually it was built of wrought iron because it was thought that a stone or brick structure would be at risk from collapse as its weight pressed down on old mine workings. When it came to demolition the quoted price was too high and the viaduct survived.

The structure is in the care of Sustrans and proposals have been on the table for ages to use it as a cycleway and footpath. 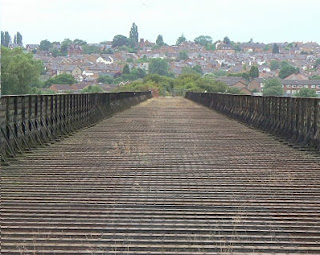 It is now a listed building "at risk".

The canal bridge at the western end is gone ... 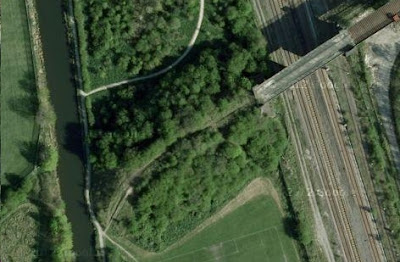 ... and there would be similar access problems at the western end. So it can't be demolished and the cost of putting in to use is probably prohibitive. Where next?

In the meantime it was particular pleasure for fbb to see her unexpectedly on his train diverted between Derby and Chesterfield due to a wonky windscreen wiper. 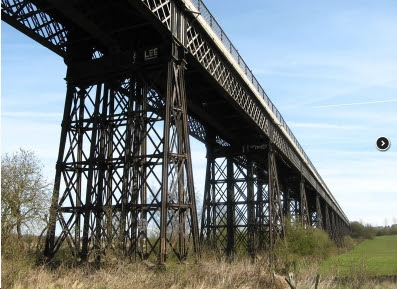 This wrought iron lattice work viaduct is 1452 feet long with the rails 60 feet 10 inches above the Erewash River. The viaduct was built between May 1876 and November 1877 and forms part of the Great Northern Railway Derbyshire Extension which was built in part to exploit the coalfields in Derbyshire and Nottinghamshire. The contract was given by the Great Northern Railway (GNR) to Benton & Woodiwiss with the line laid out by, and the viaduct designed by Richard Johnson (Chief Civil Engineer of the GNR); Samuel Abbott was the resident engineer. The viaduct consists of 16 lattice work deck spans, each 76 feet 7 inches long supported on wrought iron columns with stone capped blue brick foundations.

And so to Sheffield. Due to bulk and old age, fbb tends to alight from his train and catch a tram one stop to the city centre. A recent development at tram stops has been railway style electronic departure screens. Ominously those at the station stop (and presumably those at every stop) were "under test" - AGAIN!

Certainly the information on the screens bore no real relationship to anything running along the track. A tram was "due" as fbb wheezed on to the platform. The announcement disappeared with no tram in site. 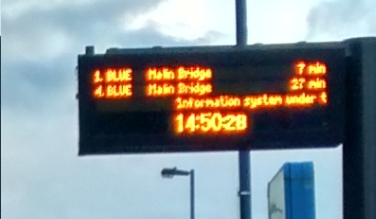 Worry not, there's one due in seven minutes. But just two of those seven minute had elapsed when a "rogue" tram arrived. 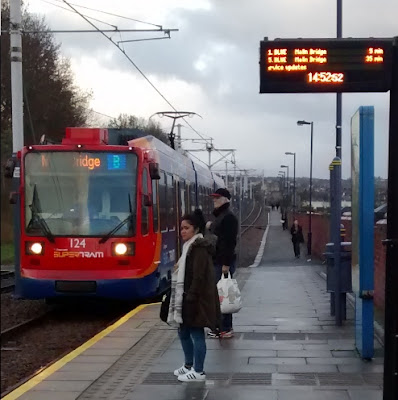 Yet another example of expensive technology that would appear to be of little use.

fbb's pad for the night was at Travelodge Central and his room was provided with an excellent view of tramway activity at the foot of Commercial Street. 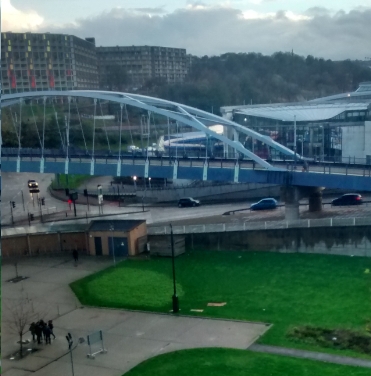 But he had one little expedition to complete before dining extensively with the Colonel. In a blog of a few weeks ago, fbb railed against the poor publicity for Sheffield Bus Partnership services 1 and 1A. See "The Horrors of High Green 3" (read again) If you don't want to read again, here's the relevant extract. 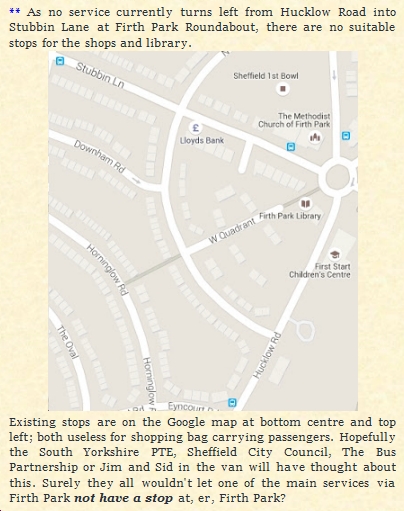 Well, the good news is that the various agencies did provide a bus stop at the foot of Hucklow Road. 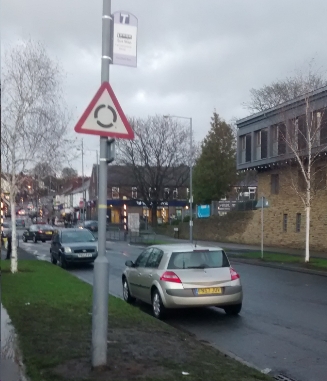 Note pool of mud for waiting passengers, lack of timetable frame; indeed, lack of anything. Looking from the Firth Park roundabout direction the flag is hard to spot in the tree (left). 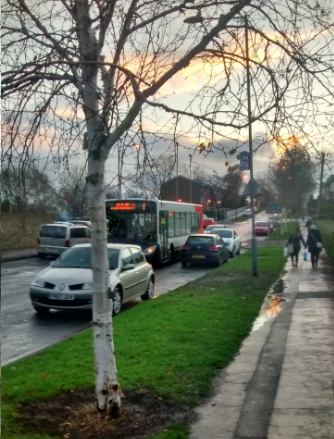 Welcome to public transport in Sheffield. Remember to wear essential clothing for your bus journey. 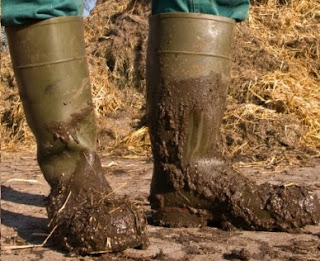 After exploring bus stops fbb returned to the city on the new Partnership service 1 (Stagecoach) and 1a (First). 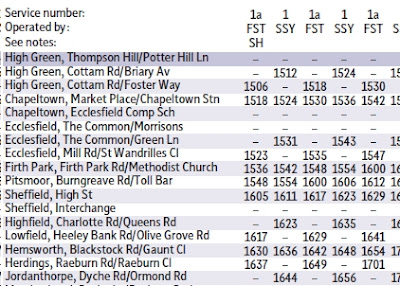 The joint service provides a bus every 6 minutes at the time fbb was travelling, one evety 12 from each operator. 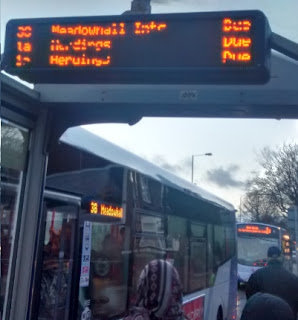 The 38 "due" for Meadowhell was at the stop. fbb's 1a "due" is just behind and the second 1a "due" 12 minutes later was just approaching as fbb boarded, overtook the chubby one five stops later and the two ran nose to tail in to city.

Apparently an informed source has stated publiclly that "the 1/1a is not working as well as we would like."

fbb enjoyed his meal with The Colonel ... 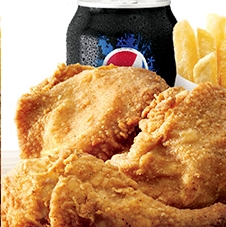 ... but sadly that Chicken loving military gentleman is struggling with literacy. 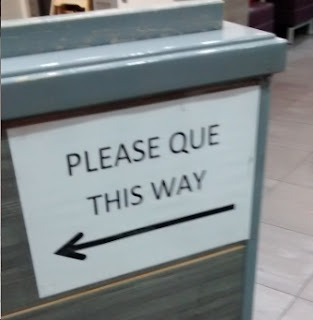 Now that is "Finger Rapping Bad"!

And finally : the new Streetdecks for the X78 Sheffield Rotherham Doncaster ... 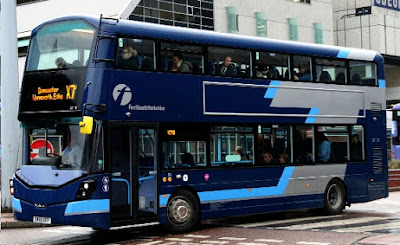 ... don't look a bit like the Mendip Xplorers recently featured in this blog! 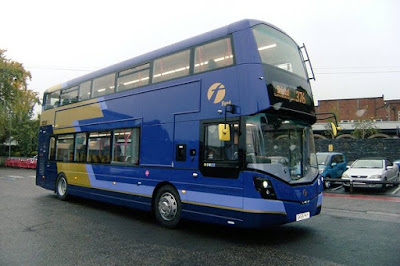 Well, they are both blue!