Since October 2014, fbb has been attending an informal model railway club based (loosely) at Buffers model shop near Axminster. The Club has been building a layout which was due to be exhibited at Thorncombe.

Then it wasn't due.

The usual communication problems meant the Buffers were expecting to attend, but Thorncombe knew nothing about it!

Then, late in the day, it was re-due. By which time it was too late to finish it!

Bummer! After some debate it was decided to exhibit the layout as a "work in progress".

This is what Thorncombe Rail Activities Club said on their web site:-

There will be about 15 working layouts covering a wide range of scales, gauges, prototype locations and time periods. These will be supported by a number of trade stands offering new & used locos, rolling stock, track & accessories, also books and railwayana.

This year we will have an area set aside for practical demonstrations & advice for both beginners and the more experienced. This will feature Bob Phelps & colleagues from Peco and members of the Buffers Bogies model railway group.

Bob is a very accomplished & experienced modeller. Prior to retirement he led the product design team at Peco and can still be found working part-time at Beer. The Buffers Bogies group will be using their "Colston Cross" layout to show what can be achieved by a group of complete novices and will be pleased to explain how they have achieved it.

Some of the Buffers Duffers were a tad narked about being called complete novices as they have their own excellent layouts at home. fbb is more than happy to be called a novice as he last "did" model railways in 1963.

So let us take a stroll round the environs of the picturesque village of Colston Cross, nestling in the gentle hills of Devonsetshire. The economy is largely rural with a small flock of well-scrubbed sheep grazing on the river bank. 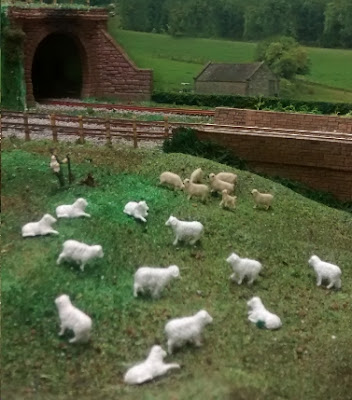 Nearby three pigs are kept warm in their houses of straw, sticks and bricks. 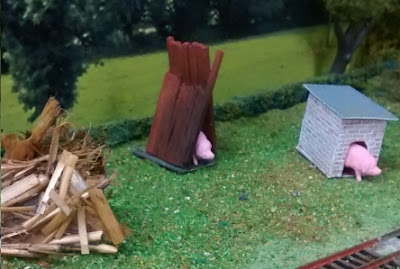 The pigs have been well scrubbed as well. Apparently Mr Fox is lurking nearby about to huff and to puff and to blow some houses down. Except he's glued to the baseboard! 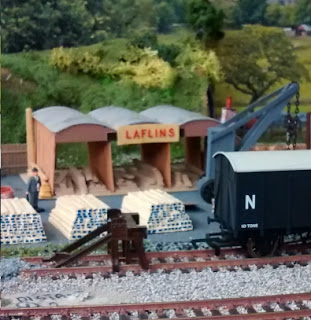 ... with its unusually smart manager!

Visitors may enjoy a look round the remnants of an ancient stone circle which, sadly, has never been as high profile as a somewhat bigger example somewhere in Wiltshire. 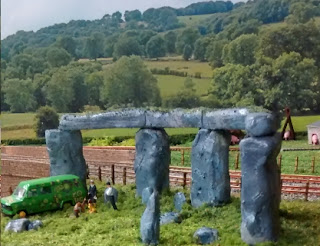 The local old bill are investigating a couple of 21st century hippies and their personalised Trannie. 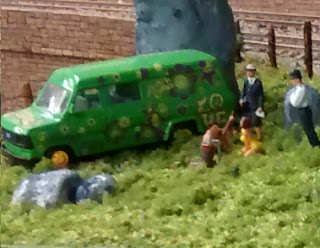 The progenitor of this scene hit the headlines in the national press as blogged previously by fbb. Read again (here).

fbb's contribution has been to make a pub, again previously blogged (here). Although not completely finished (railway models never are!), it is beginning to look a bit more like what it is supposed to be. 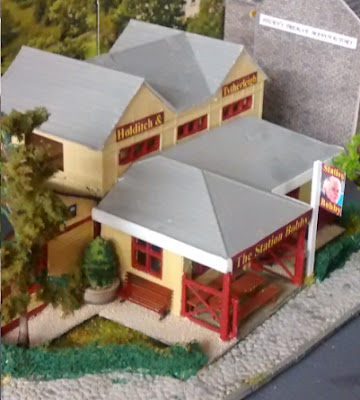 The eminent personage emblazoned on the pub sign is Bobby who is the shy and self-effacing leader of the club. Of course all the members share in planning and execution of those plans, and Bobby (more experienced) is always available to tell us all what to do offer friendly advice. 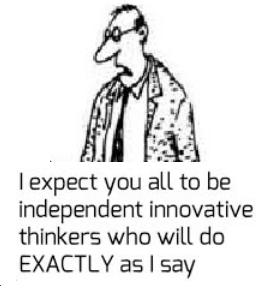 When pictured, trade at the pub was a little on the slack side - i.e. not a customer to be seen. But when the car park is finished (a job to be done at the Exhibition - part of the "work in progress") crowds will flock to enjoy Holditch and Tytherliegh's find ales!

fbb has also contributed a small row of cottages based on the Dapol (formerly Airfix) kit. 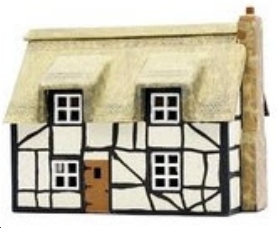 To make them different from everyone else's cottages, the moulded "half timbering" was all rubbed off to give a smooth "plastered" finish. Two kits were chopped up to make four "low relief" models ... 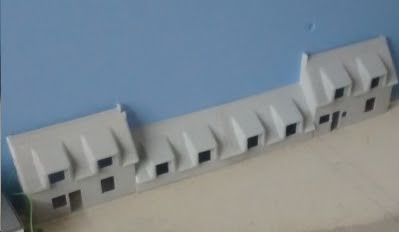 Several hours' work later, the village has its row of traditional buildings complete with thatching in progress and roses round the cottage door. 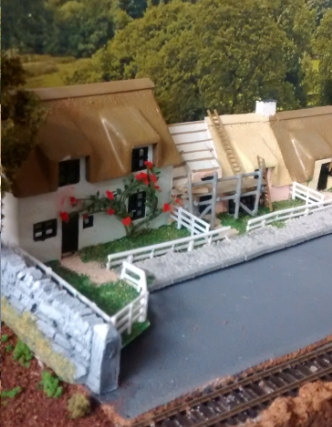 As previously hinted, fbb is one of the "complete novices" mentioned in the blurb but it has been pleasurable to rekindle a long lost interest. 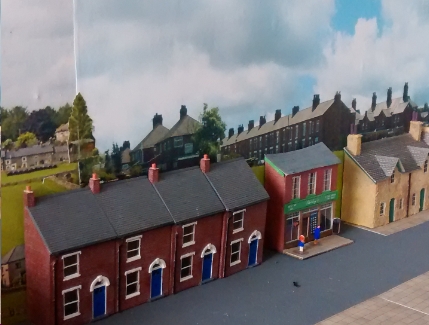 ... lead to the station, a splendid edifice built during the misplaced optimism of the late ninetheeth century. 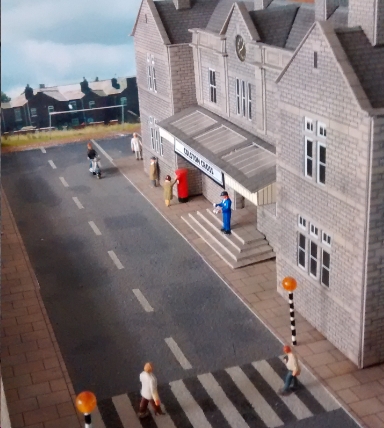 The section of layout that includes the station building is another area that is to be worked on today. 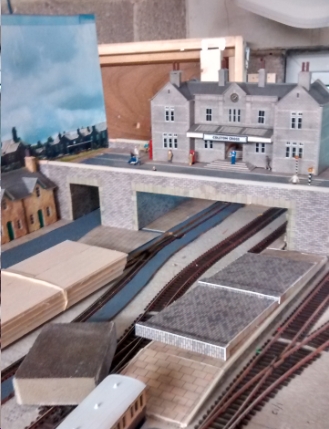 And what is this mysterious building at the end of Station Road? 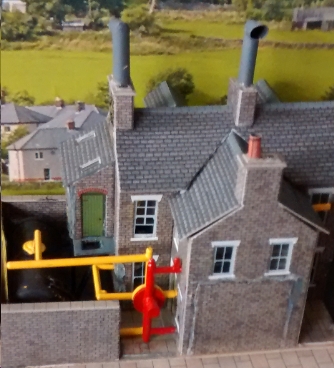 What, pray, courses through those brightly coloured pipes and valves? You may well ask.

The layout is totally fictitious, although it does take its name from the location of Buffers shop; the purpose of the project was to bring together modellers of varying abilities; to encourage one another to develop new skills (fbb has learned to solder!) and provide a social forum for he exchange of ideas. The results are not at all bad.

Will there be any trains running at Colston Cross today? The team are hoping to have a few locomotives trundling up and down if the gang can sort out some wiring problems. Here Buffers puffers are hard at work with emergency electrical engineering repairs ... 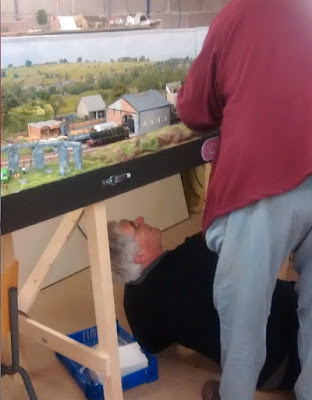 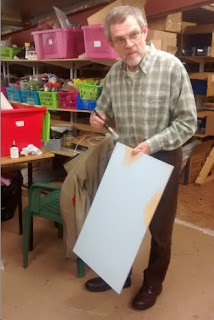 ... his hands, his shirt and his coat. Ah, a modeller with similar skills to fbb.

One of Mrs fbbs chums refers to railway modelling as "playing with your train set." Mrs fbb is planning to buy a dolls pram and occupant for Christmas; but despite these slurs on fbb's miniature ferroequinological creativity, the old man is much enjoying the relaxation of his re-discovered hobby.

Relaxation? "Help! I've dropped a very small and essential part of a plastic kit on the floor and the cat has eaten it!"

Tomorrow we will look at some of the "real" layouts on show at Thorncombe today.


Next model blog : Sunday 8th November
Posted by fatbusbloke at 02:00