Put The Passenger In The Pipe! 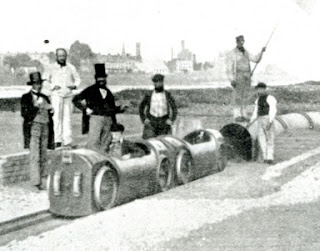 George Medhurst first proposed in 1799 that air power (pneumatic) should be used to transport goods at speed and away from the busy city roads. In 1812 he went one stage further and proposed that passengers would also be transported. 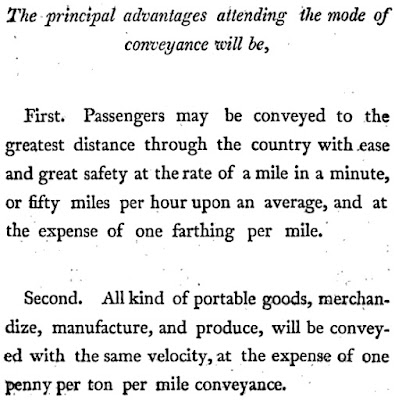 After a few less than successful experiments, parcels traffic was blown through tubes under London from 1853. The fuzzy photo ave shows experiments and other engravings develop the idea. 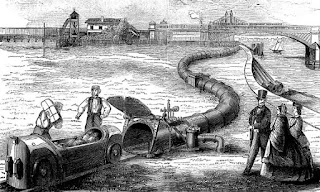 The picture below purports to show a typically over-the-top launch ... 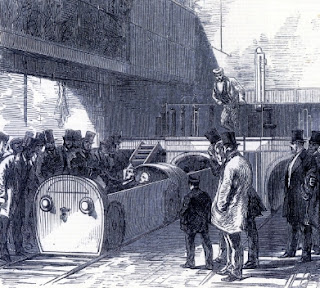 ... possibly by The Post Office. But the technology did not work very well and ultimately a substantial pneumatic network was abandoned in favour of the better known Royal Mail underground railway - itself now defunct. 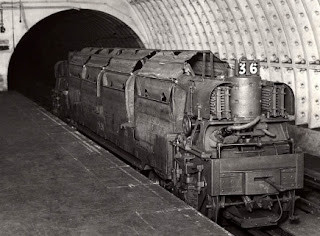 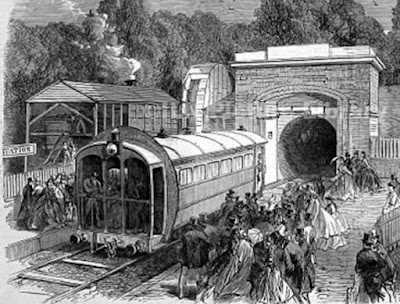 An over-optimistic engraving shows the carriage with its collar (actually of bristles), the mouth of the "pipe" with a heavy door just in front of the carriage, a pumping engine (in shed) and a pump looking a bit like a water wheel.
The tunnel was built in a shallow trench of 4 feet in depth; the contemporary illustration (above) showing the line disappearing beneath the landscape seems to be no more than artistic licence although, as built, earth may have been drawn up around the structure as shown below. 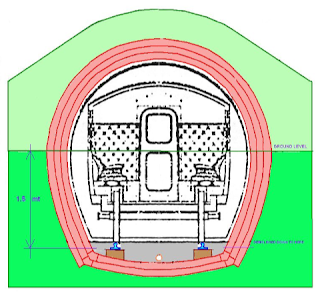 The power was provided by a large fan, some 22 ft (6.7 m) in diameter, like a paddle-wheel in an iron case (see engraving above) that was powered at 300rpm by a former steam locomotive. The carriage at the upper terminus was allowed to enter the tunnel under its own weight, when "a pair of iron doors, hinged like lock gates" was closed behind it.
Tickets cost sixpence each. Trains ran between 1pm and 6pm and the journey time was 50 seconds. The line operated from 27 August 1864 to October 1864.
The tunnel ran for 600 yards between the Sydenham and Penge entrances to the park following the arc of Crystal Palace Park Road. 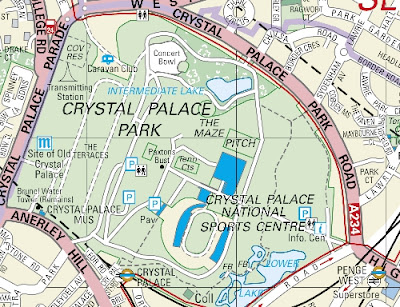 The Sydenham entrance is by the PA of the Palace road name and the Penge entrance is near Penge west station, bottom right. It is highly likely that the tunnel followed the line of the present footpath ... 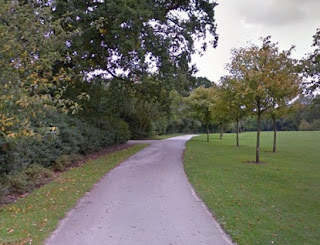 ... a supposition supported by modern aerial photographic technology. Below is an animated GIF alternating between a current Google Earth aerial view and some super clever Government survey stuff.

It clearly shows evidence of an earthwork following the line of that path.
The Crystal Palace line was built as a demonstration with a view to installing such a system in central London, but it never happened - possibly because the technology was to up to the job.
1870 : New York

Alfred Ely Beach had a vision for a network of pneumatic trains under the streets of New York. Using mostly his own money he built a short demonstration line with ran from Warren Street just round the corner and along Broadway. 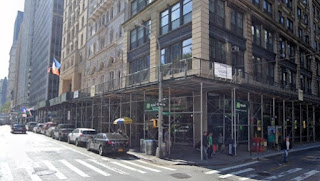 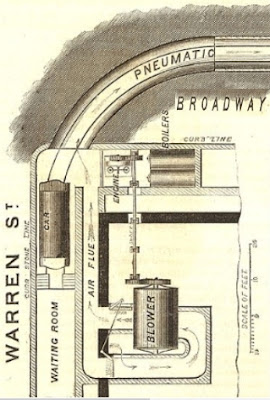 For the public, the project was used as an attraction. It ran only a single car on its one-block-long track to a dead-end at its terminus, and passengers would simply ride out and back, to see what the proposed subway might be like.
Engravings show the Warren Street station with the tunnel curving round to its uninspiring end! 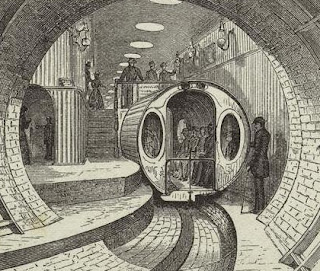 The top-hatted glitterati of the Big Apple are shown eagerly awaiting the next departure to nowhere. 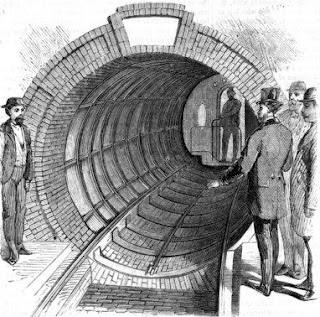 During its first two weeks of operation, the Beach Pneumatic Transit sold over 11,000 rides, and over 400,000 total rides in its single year of operation. Although the public showed initial approval, Beach was delayed in getting permission to expand it due to official obstruction for various reasons including straightforward obstructionism from the City Authorities.
The investing public soon lost interest and the subsequent Stock Market Crash prevented any Beach Resurrection.
In 1912, the old tunnel was excavated during building work and the remnant of the carriage were still there. 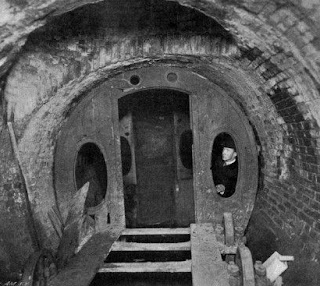 It seems unlikely that the pump and tunnel seal technology would ever have been commercially viable on a larger longer system.
Back to the Small Pipe And Piston?

In 1989 his company established an "atmospheric" (small pipe pneumatic) railway in Jakarta. 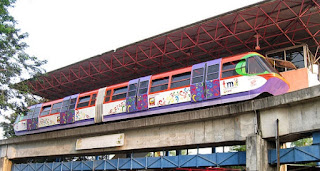 The "pipe" is included in the concrete track and, as usual, a piston is linked to the train. A more recent version serves the airport in Porto Alegre ... 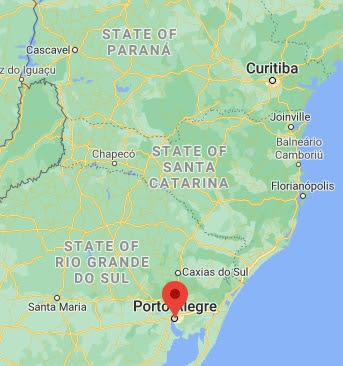 It links the Airport heavy rail station with the terminal building. 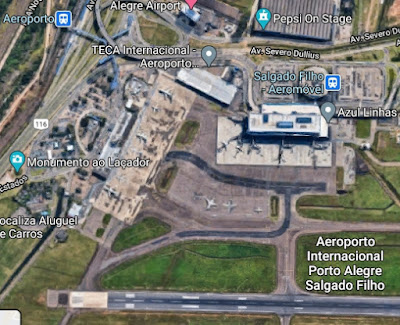 It links then rather slowly with a one car train. 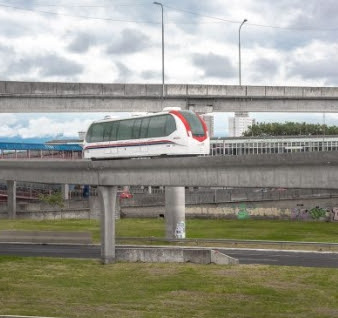 A more substantial line is planned, also in Brazil.
The technology is based on pneumatic propulsion – the air is pressurized by high energy efficiency stationary fans, through a duct located within the elevated guideway. The air pushes or pulls the propulsion plate attached to the vehicle, which moves along a truck (platform on steel wheels) on rails. 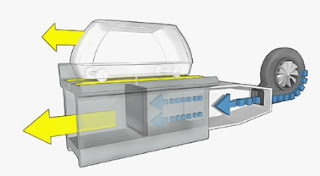 So what next? Well, there is Hyperloop!
Whilst Waiting For Tomorrow's Posting ...

A lesson on coping with Lockdown from Mr Tubbles.
Also an opportunity to relax from Mark Morgan Hughes' moggy ... 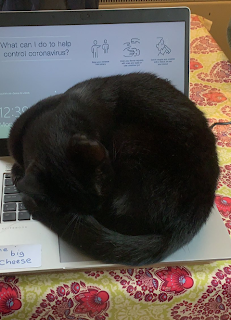 ... name not known. Mark twitters, "OK, got the message; times to take a break from work!"
Voltra reVealed! 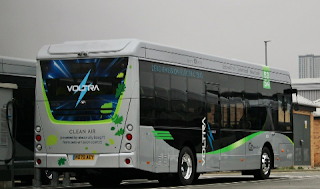 After all the hype, maybe a little disappointing?
Next Travelling By Tube blog : Thursday 19th November
Posted by fatbusbloke at 02:00