An Infestation Of Spiders - REDUCED (1) 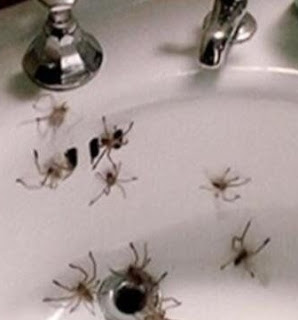 If your desire is for a wide-ranging blog, full of fascinating delights, then you will, of course, stick with fbb. But a different style is that provided by:-

He is, it would seem, a dyed-in-the-wool Londoner with loads of pictures and musings about the Metropolis, including its transport systems. He has recently blogged, for example, the ten busiest bus routes ... 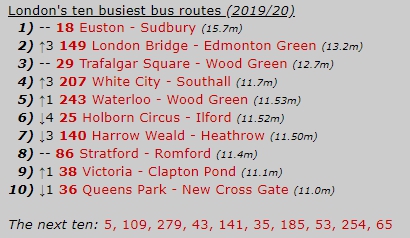 ... and the ten quietest.
It is some of his more esoteric postings that amuse fbb. Here he reveals ... 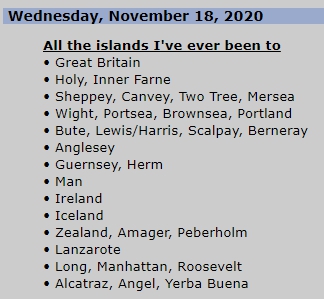 ... and calculates the weight of each of the varieties of Cup-a-Soup. 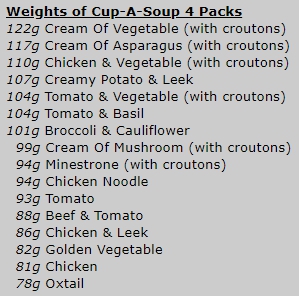 fbb cannot really understand how he has lived for so long without having those weights on hand to refer to from time to time.
Mr Geezer is often concerned about bus maps - as is Roger French - as is fbb. It is becoming increasingly hard to find out where London's buses actually go.
So, yesterday were are warned about the on-going decline in cartographic information emanating from TfL HQ.
It's now four years since TfL were due to print some new bus maps but decided not to. The last quadrant maps were published in March 2016 ... 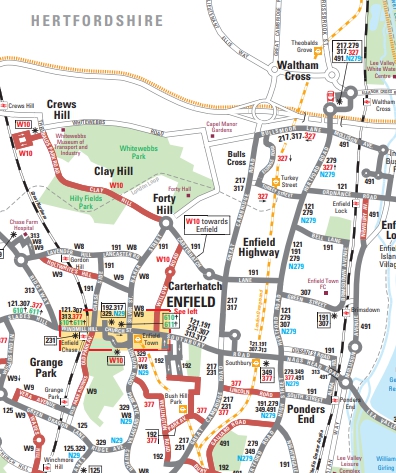 ... ditto the last Central London bus map, and haven't been updated since. I've blogged about this in some detail before.
The quadrant maps and the central area map covered the whole of Greater London with maps as per the sample above. The full London-wide network map was taken over by the redoubtable Mike Harris and are still published by him - available on-line. 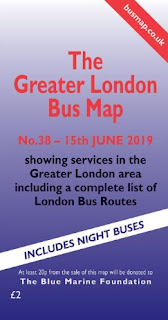 Never fear, said TfL. Most passengers know where they're going, and those who don't can use our excellent digital products like Journey Planner or fire up an app, skipping the tedious map reading stage altogether. Plus of course there are hundreds of spider maps, which we link to on our website, and these provide local information in key locations.
Recently the design has been changed. The former style took the spidery lines to the very end of each route ... 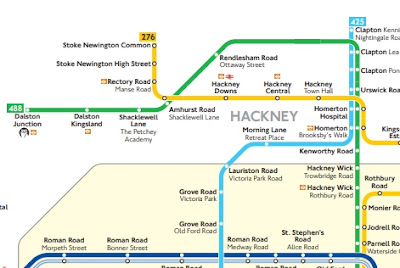 ... whereas the new style stops short; on the assumption that nobody in their right mind would ever travel all the way on a London bus route. But it does mean that the new maps are less complete than the old. 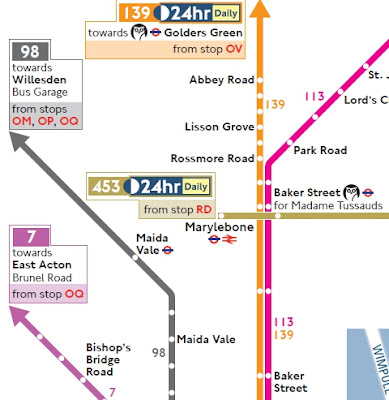 But, at least, these diagrams give the passenger some idea of where their bus might go, as long as they only want a shorter journey.
Except that, increasingly, they don't. Mr Geezer continues:-
The bus spider map page on the TfL website started haemorrhaging pdfs some time last year. They only vanished in certain parts of the capital, generally in outer London, but in some boroughs the vast majority of spider maps have been deleted. In Hillingdon, for example, the number of spider maps has dropped from 37 to 17 and in Harrow from 27 to 5. 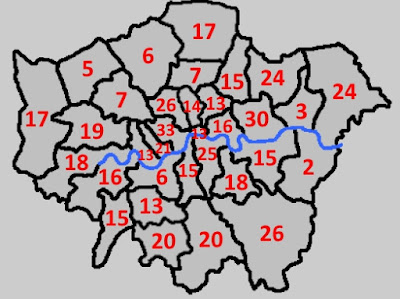 Hillingdon and Harrow are on the upper left of the map above.
fbb has never been a fan of the spider maps, but has been persuaded of their usefulness by the fact that a geographical representation of the old-type full route length spider would be too spidery and too far-reaching to communicate the shorter distance information. Essentially this is why Harry Beck invented his underground map. 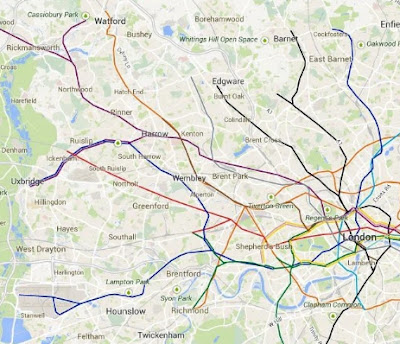 Look how tiny the central area is compared with the distance in the suburbs. Full-length geographical versions of many old-style spider would give similar problems.
But now spiders Mark II are more local, why not provide bus users with a "proper" map?
Would it be possible?
fbb loves a cartographic challenge, so yesterday set about the challenging task.
Fortunately TfL provides PDF versions on-line for downloading which fit on a manageable A4 page. For experimental purposes it ought to be possible to play with these files; but fbb does not have a PDF editor.
The first part of the experiment is to take a look at the central block of the PDF, a street plan of the area at the centre of the spider's lair. 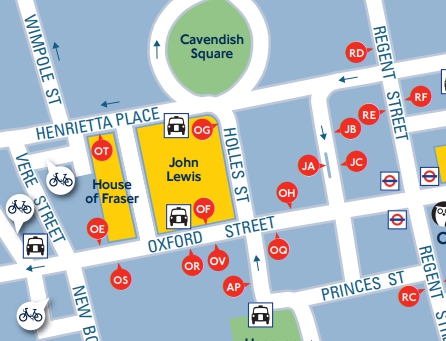 fbb wondered whether it would be possible to show route numbers at their designated stops. A small box with the numbers could be added to the red stop letters, perhaps.
Whether the TfL PDF file is badly drawn, or whether the software that fbb uses struggles to reproduce what TfL has created is a moot point. As fbb's computer stuff usually accepts and reproduces other software's PDF files with no problems, he would go for badly drawn option!
Whatever, this is what arrived on-screen for fbb to work with, just a small part of the Oxford Circus new-style spider:- 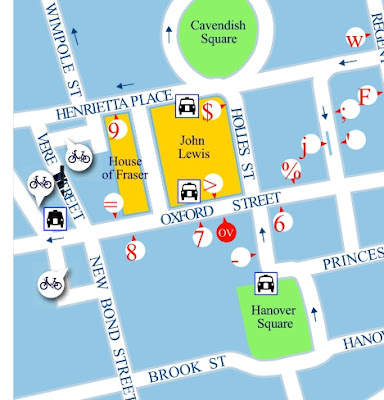 What has happened to those bus stop blobs? Clearly this is going to be a long-term project.
fbb will keep his eager readers informed of developments over the weekend. Whether there ARE any developments will depend on the weather - the framework for the outside Christmas lights display has to be repair
Special thanks to correspondent Ian for alerting fbb to the spider disappearance and providing a link to Diamond Geezer's blog.
Train Ferry To The Isle Of Wight 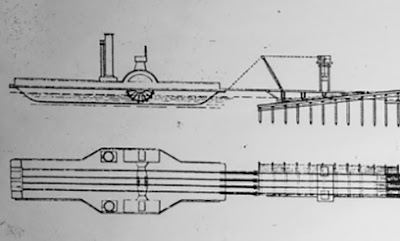 There was one (above) from the Hayling branch line to Bembridge which operated from 1885 to 1888. Until the 1966 electrification, rolling stock from the mainland was usually carted across the Solent by barge.
But the ferries were bigger by 1966, so, one car at a time, the units arrived at Fishbourne. 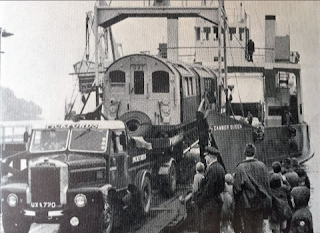 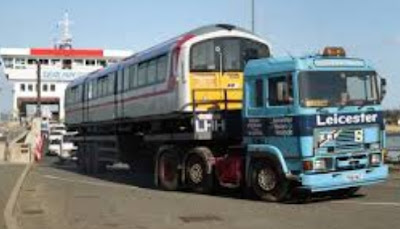 And it started all over again yesterday with the first car of the Vectarial class 484 units being low-loaded onto the ferry at Fishbourne ... 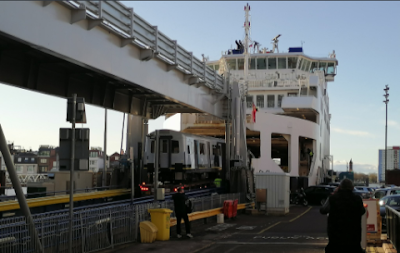 ... photgraphed en route at a distance! 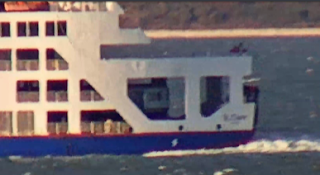 One picture comes from inside the car ON the ferry ... 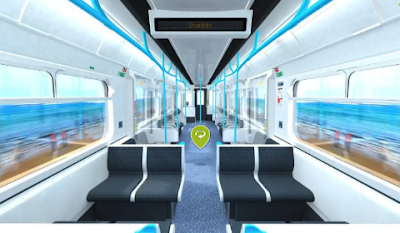 ... highlighting the hard cheap seats! Then we observe the off-loading ... 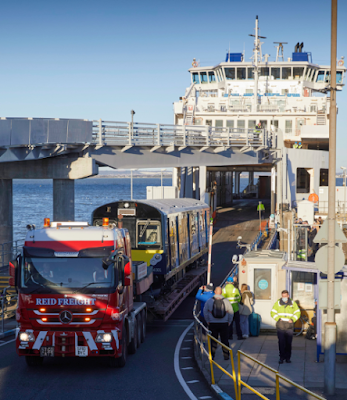 ... and so off to Sandown (?) to roll the carriage onto the siding. 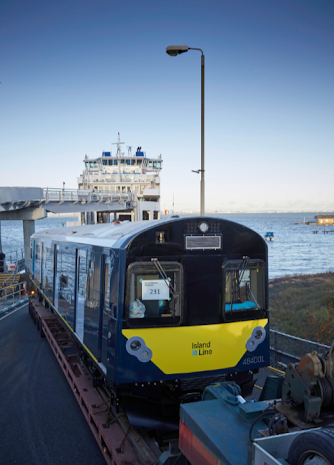 The Island Line will be closed from January to March, although there have been a couple of weekend closures to lower the track under Smallbrook and Rink Road bridges.
All very exciting for Island passengers and enthusiasts.

Next Variety blog : Saturday 22nd November
Posted by fatbusbloke at 02:00