Two new London rail maps have been published recently. The first is the latest tube and rail map. This now stretches way beyond London and might be better termed the "Oyster Card" map!

It stretches to Hertford East ... 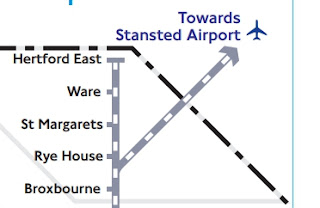 ... but not Hertford North! 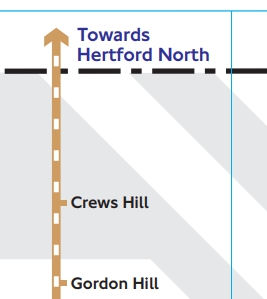 The dotted line boundary shows the extent of Oyster validity ... 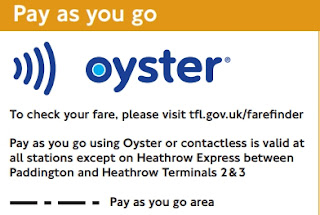 ... and Travelcard availability, with further exceptions. 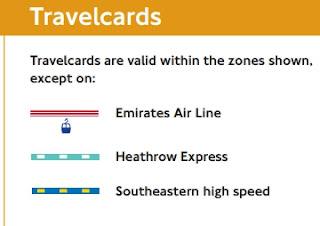 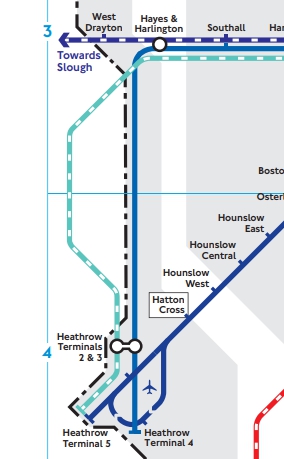 Note the lack of a comprehensive interchange "blob" at Terminals 2 & 3, and Terminal 4. Odd?

It is unclear why the cartographers have added that wiggle. Although it is "abandon Oyster and Travelcard for all who are conned into paying the rip-off fare", that SHOULD mean that Heathrow Express simply does not appear on this "Oyster" map.

The answer, of course, it to bring the service into line with other routes to Heathrow and stop charging the unkind premium. Likewise the SouthEastern Javelin service excludes full "normality" between Kings Cross and Stratford.

London Travelwatch has become very excited about the latest edition. 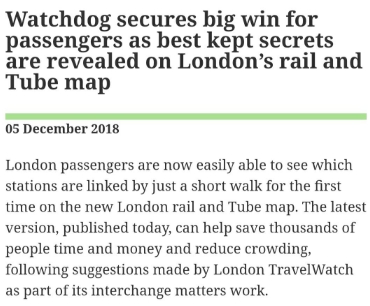 Their group has been campaigning for better information and the result of that lobbying is a "walking man" symbol to show interchanged "via street level". 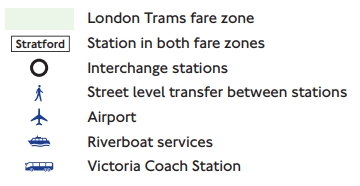 Sadly the application of this diddy man is inconsistent. He can walk from Catford to Catford Bridge ...

... where the two entrances are pretty-near visible from each other. 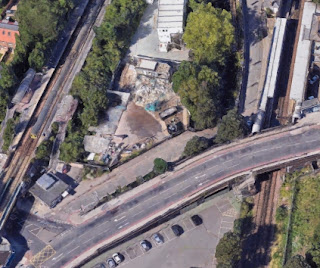 But at Elephant and Castle (as recently blogged!) there is no nipping man ...

... and the route is far from obvious.

Brixton Underground station is reasonably obvious on the Brixton Road ... 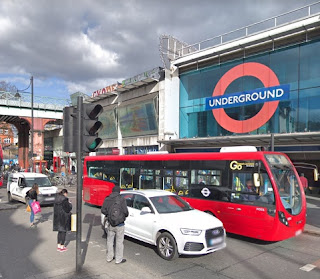 ... and you can see one of the the national rail viaducts in the background (centre left). 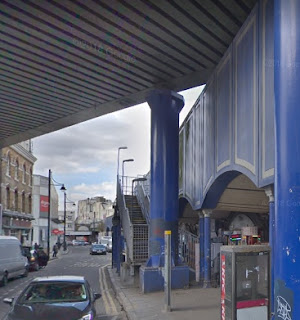 The station is very well hidden round the corner PAST the bridge as seen above. Walking man walks not!

But he does walk happily at Clapham.

Here you walk forward from the Undergound ...

... along Clapham High Street and turn right after passing under the overbridge.

There is the overground station on the right. 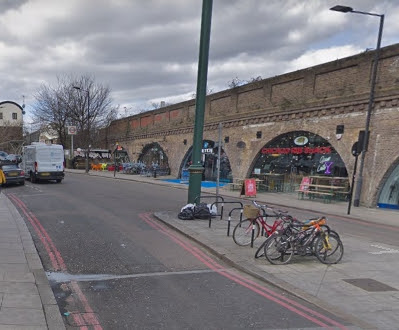 At Hackney, we know from a previous blog, that interchange is very complex "at street level" but the walking man will actually walk via a dedicated walkway - very much NOT at street level. 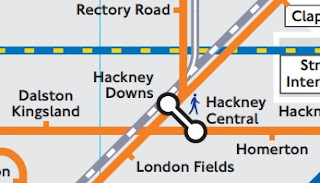 But at Bow, the genuine street level interchange doesn't get a micro-man! 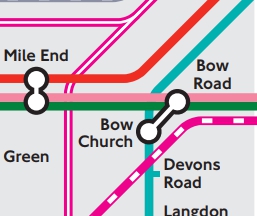 One more interchange challenge which ought to be very simple.

At Birkbeck, you can "interchange" between the big train (DOTTED GREEN) and the Croydon tram (GREEN). 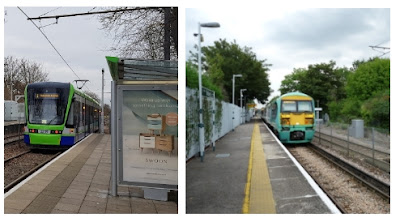 It involves leaving the national rail station and dropping down steps to the street ... 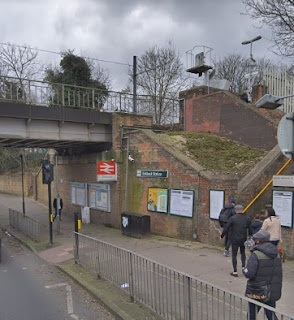 ... walking under the tracks and up the other side with no obvious signs at street level. 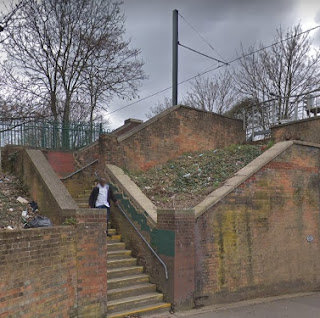 Before an anonymous tells fbb he is thick if he cannot work that out, remember BOTH services are on single track sections with trains running in both directions. Someone unaware might easily become disorientated and confused. It is often the "simple" interchanges that baffle.

The sad fact is that, despite the revisions to the map, the London "network" is not promoted as a unified system but as National Rail plus TfL bolted on, often illogically. More work still needs to be done to establish a clear "quality measure" of interchanges.

Some of that lack of logic becomes apparent when we examine the other map which has appeared recently.

It has been produce by a Mr Ali Carr (or is is Mrs Alison?) and collects together all the bits and bobs, some quite dramatic, that have exuded from the office of the London Mayor.

Like the current "Tube" map it most definitely isn't. It is a Transport for London things that run on rails map plus things that dangle from wires.

But it makes for fascinating reading.

fbb will peruse openly tomorrow but it does appear to get Heathrow right! 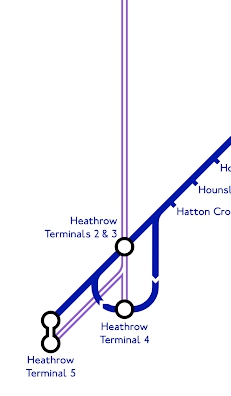 -o-o-o-o-o-o-o-o-o-o-o-
ADVENT CALENDAR 7
Solomon, famous for his three "W"s; great Wisdom, great Wealth and Worship in his new-build temple, went a bit off-piste in his latter years. He produced a weak son (Rheoboam) who managed to lose over half Solomon's Kingdom.

Soon the Assyrians overran the northern bit, meaning that the loss was pretty permanent. 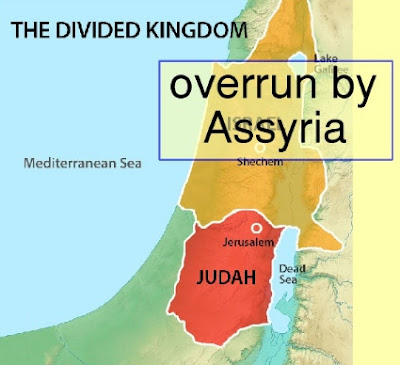 Meanwhile, down south, a new kid on the block was top prophet. His name, Jeremiah. 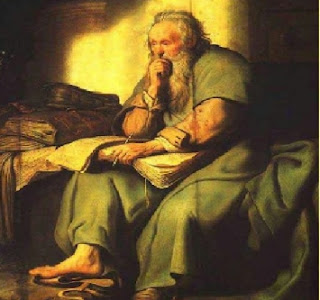 Jerry was not a happy bunny. His prophecies are often full of woe, doom and misery. In general he told the people and their leaders that if they continued with their sinful and disobedient ways, they, like to folk from the north, would be overrun and destroyed.

They did and they were - taken into exile in Babylon. So much for God's chosen people who chose to ignore God!

But even the doom-monger Jeremiah saw a different way - a way of salvation that was radically different from the old regime of temple and sacrifices.

Jeremiah prophesied a new, personal faith with changed deep down withing each person - a new covenant which we call the New Testament - beginning with CHRISTmas.

Next cartographic blog : Saturday 8th December
Posted by fatbusbloke at 02:00