To And From Aztec West

It has nothing to do with the Aztec civilisation in Mexico ... 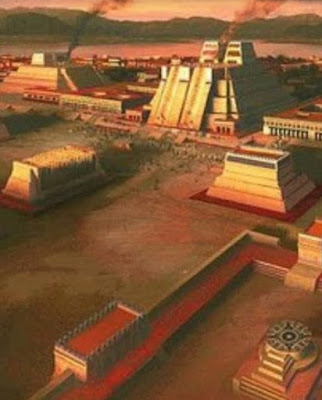 ... which flourished from the 14th to the 16th Century, and where the main settlement, Tenochtitlan, is now a world heritage site. 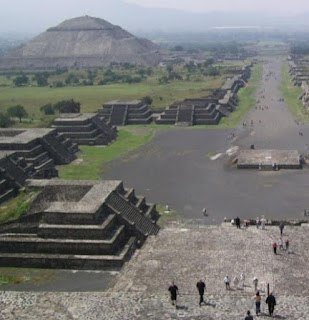 Neither does it have any links with the choc bar ... 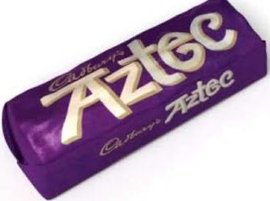 Nor is there an Aztec East! 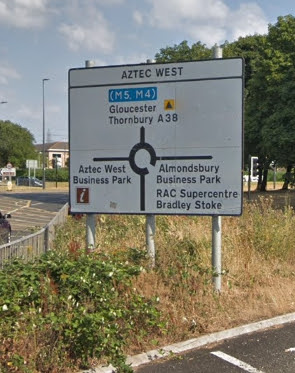 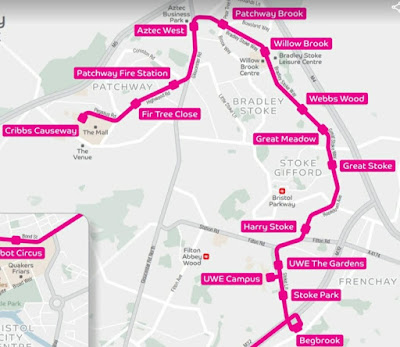 ... via Aztec West, then the main Bradley Stoke "spine" road (Bradley Stoke Way) to the University of the West of England thence as the M3 via the M32 bus only junction fast into the city. Except that it doesn't serve Aztec West as such.

The Bristol version of the Nahuatl speaking American Indians is a huge business park ... 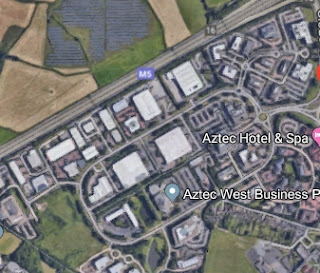 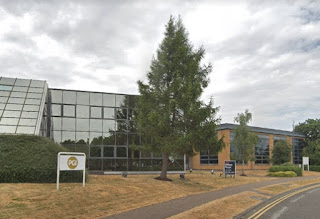 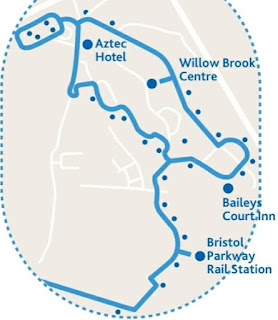 ... is currently served by a clutch of Stagecoach Monday to Friday "works" routes. 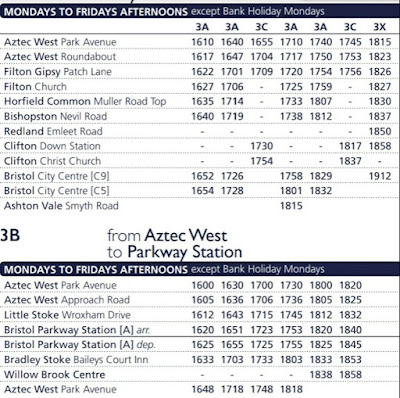 Before their total capitulation there were part of the Wessex Bus Bristol network. 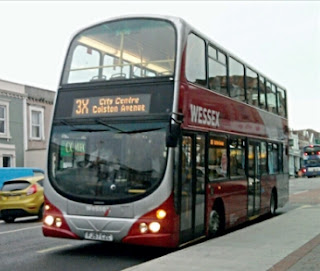 First Bus, however, does not dare to penetrate the Business Park itself, presumably in dreaded fear of the Aztec warriors. 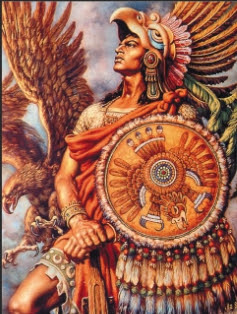 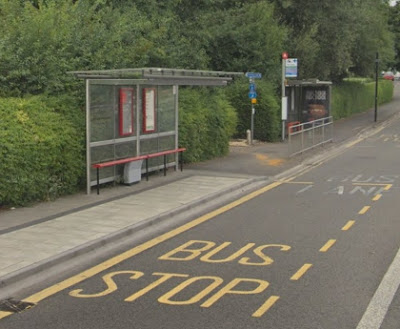 ... adjacent to the roundabout. Notice the posh new shelter for the M1 (still awaiting its monolith when Google streetviewed it) and the ordinary shelter for the lower orders who use non metrobus services.

fbb travelled Bradley Stoke Way when exploring the T1 to Thornbury (read again) and will not repeat the experience here.

After saying hello to the local "man of the road", Harry Stoke, the M1 runs along Filton Road to UWE where is joins and augments the M3 into City.

What is a bit of a shock is the frequency of this new, exciting (?) and innovative (?) metrobus service. It runs every 10 minutes from dawn all through the day ... 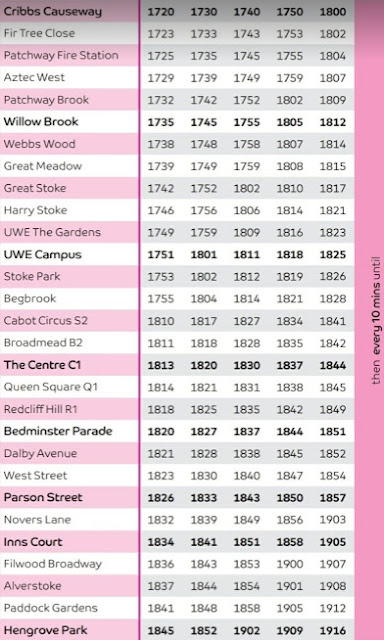 ... to close of service at midnight!

Only on Sundays does the headway drop to every 20. 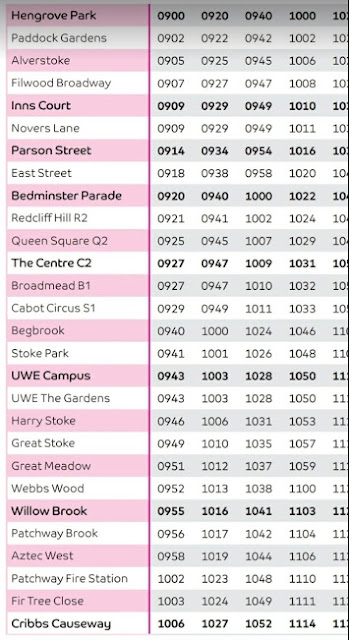 Certainly such a frequency is more akin to the Bristol's aspiration for a "proper" tram service, and there has always been plenty of business between UWE and the city. But north of the Uni, where are the passengers going to come from? An awful lot of bums on seats will be needed if the wonders of metrobus are ever to turn even a break even balance for the operators.

And in case you wondered, the "Aztec West" name has its origins in the early development as a "Science Park" a scheme now diluted into more ordinary office work.

Join A to Z Technology Park to West of England and there you have a natty (in)appropriate name for a load of offices grouped round an oval road. fbb suggests a renaming to "Sausage Park". He does wonder how many who toil away behind mysterious closed doors actually know why they are so named. No doubt they don't care as they drive in and park their limos. 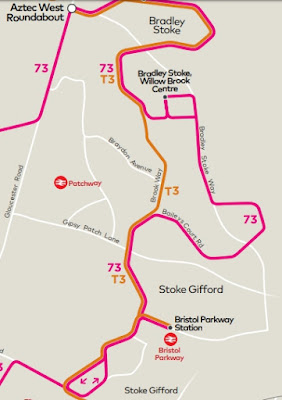 Indeed it does. Route 73 runs from the shopping centre ... 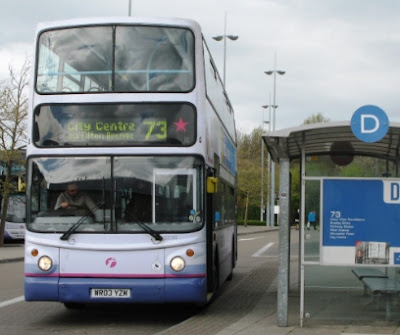 ... to the chocolate bar roundabout (just like the  M1) but wiggles a bit more, serving parts of Bradley Stoke where people actually live. Usefully it calls at Parkway Station (the M1 doesn't) and runs into the city via the much slower Filton Avenue.

But, even more usefully, the 73 terminates at Temple Meads Station. 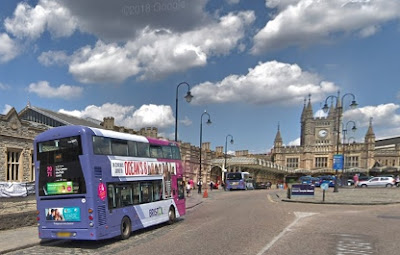 And that means AT Temple Meads Station, not lost amidst a forest of road works and traffic lights at a not-so-nearby mega roundabout, as is the M2. The M1 goes nowhere near Temple Meads.

From January 6th the 73 is reduced from every 15 to every 20 minutes because passengers will flock to the M1.   Maybe?

Tomorrow, we follow the M1 to the mysterious wilds of south Bristol; mysterious to fbb as he has never ventured that way!

-o-o-o-o-o-o-o-o-o-o-o-
ADVENT CALENDAR 19
Yesterday, the fbbs (with chum Julia) enjoyed a traditional Christmas lunch at the New Inn (which is actually very old) Kilmington, a village between Axminster and Honiton. 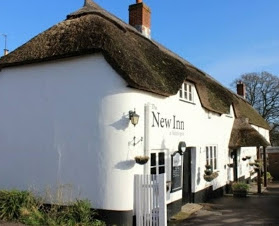 The ambiance was warm and cosy and mine hosts were friendly and attentive. 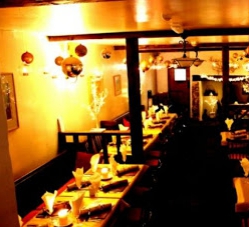 All three had a substantial main course of turkey (with all the bits and pieces) but fbb moved on to an extra delicious hunk of home made Christmas Pud c/w very Brandy (phew!) Butter and plenty of cream.

Although we talk of a "traditional" meal, most of these traditions are modern and none of the menu items has any real link with Christmas. 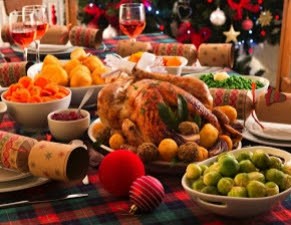 The turkey, as a meal for the ordinary family, really only dates from the late 1950s when turkey farming became big business. And later became "bootiful" ... 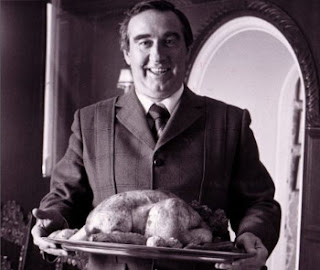 When the people of Jesus' day "feasted", the meal was a well structured "visual aid" of the season or event that was being celebrated.

Probably the most important "do" was Passover when folk remembered the miraculous way in which God had freed them from slavery in Egypt, led them across the Reed Sea (not Red!) and onwards to the "Promised Land". 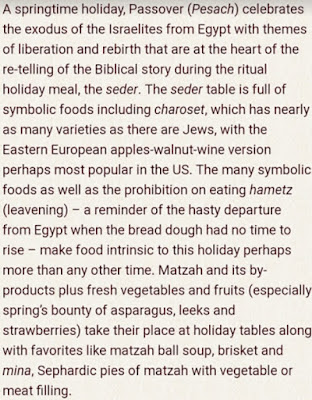 Every part of the menu was, historically, developed as a reminder of this well-remembered liberation. 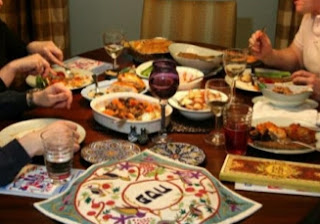 So a celebration meal is a splendid idea. But surely we need to remember whose birthday we are celebrating?

Or the celebration is hollow.

Whoops! Yesterday, fbb got a bit mixed up with days and dates on the blog. It has become tricky to remember since that nice Mr Baldwin became Prime Minister a couple of years ago.

Next Bristol blog : Thursday 20th December
Posted by fatbusbloke at 02:00