One recent and anonymous comment write assured fbb that everything was quite straightforward and the problems were of hi own making, "by going into it in too much detail". As Mrs fbb might say, "Maybe aye, maybe och-aye!"

Seeking public transport information from "far-off countries about which we know very little" can be a challenge; and this increases when the language in totally unfamiliar. 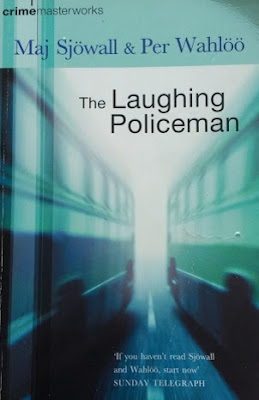 On Monday, your chubby blogger was tracing the opening scenes of this Swedish crime (not very) thriller in which the dastardly deed was done, later 1967, on a Stockholm bus on route 47. 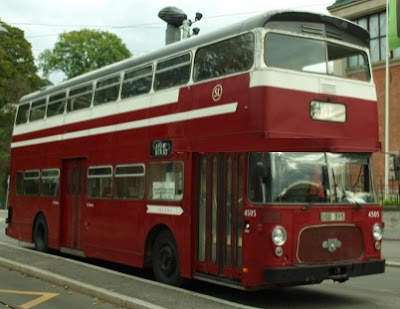 The 47 no longer exists but fbb was able to suggest that it once terminate here ... 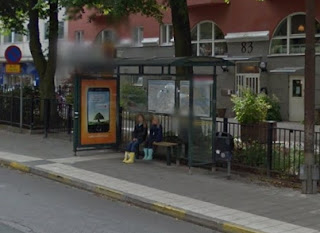 ... in a suburb named Karlberg.at the end of a road called Karlbergsv&aring;gen; v&aring;g means "road", so Karlberg Road. But the district name does not appear on, for example, Google maps. But, belay that order Cap'n! Across part of a spaghetti pf rail and roads we spot this:- 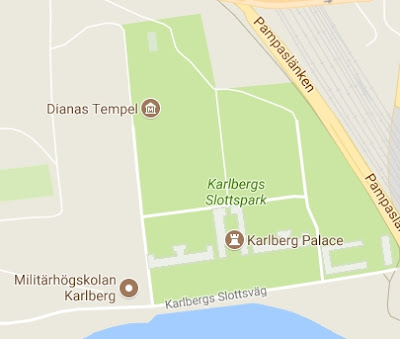 Karlberg Slott, translated as "Palace". (Slott is similar to Schloss in German and literally means "Castle"). It looks quite spectacular. 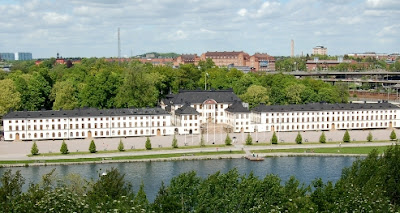 Three medieval villages at the location (Ösby, Bolstomta, and Lundby) were bought by Lord High Admiral Carl Carlsson Gyllenhielm (1574-1650) in the 1620s and subsequently unified into a single estate named "Karlberg" after himself. 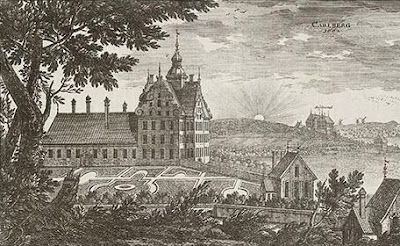 It was subsequently bought and rebuilt by Lord High Admiral Magnus Gabriel De la Gardie (1622-1686) who built a better pad. 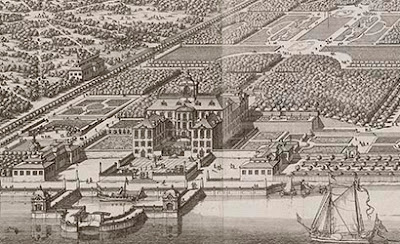 By one of those great regal manipulations, the palace passed to the Crown and rebuilding in the present form was completed in 1754. It was rebuilt as barracks later in the eighteenth century, the from in which it stands today.

It is still a military establishment as shown by the only road which approached from the west. 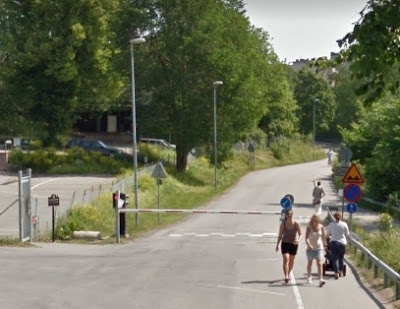 The parkland is open to the public during daylight hours and contains a temple to Diana (see map able) and a memorable grave. 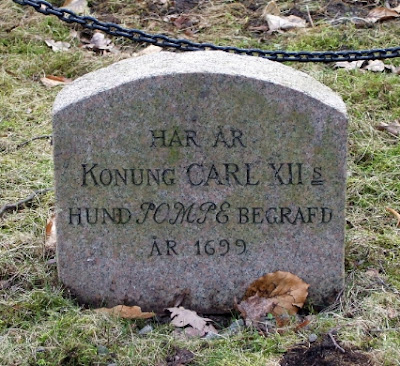 So, clearly, the Palace/Castle has given its name to a neighbouring suburb, although the name is hardly used for the district nowadays.

How might you get to Palace and suburb by public transport? We already know that bus 69 goes to the suburb, but can we find a timetable? 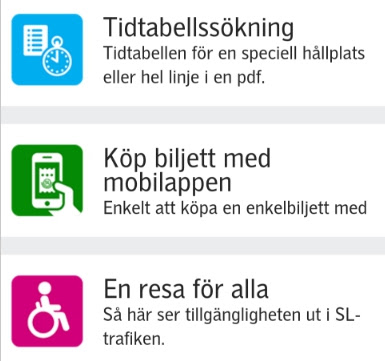 fbb has already guessed that the middle heading is about buying tickets on your mobile phone, the lower panel about disabled access, so the top might lead is to timetables. How about ...

... without recourse to Google Translate.  Google struggles with "h&aring;llplats" and gives "hall location", perhaps "stop location"; and the bottom line looks like offering something as a PDF.

And, yippee, we can find a timetable for the 69. 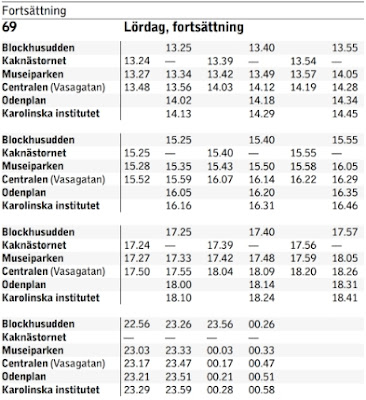 Buses are nearly every 15 minutes but with steady variations during the day.

Alight here at the end of Karlbergsv&aring;gen ... 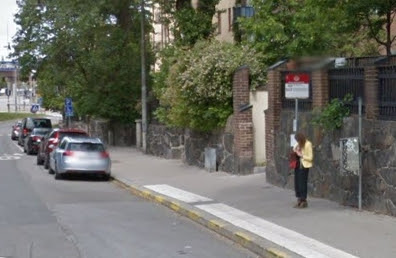 ... walk forward and round to the left at the end. This is R&ouml;rstrandsgatan. From here we can actually see the greenery of the Karlberg Palace grounds ... 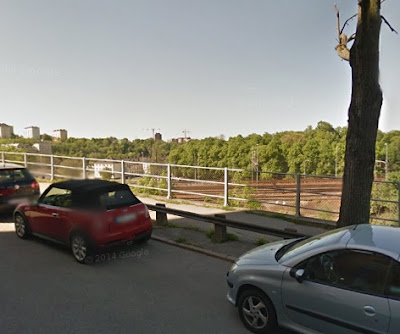 ... but there seems to be a lot of railway in the way, and we appear to be atop some sort of embankment. But plod on. Oh dear, railings all the way along and no way down or across the railway. 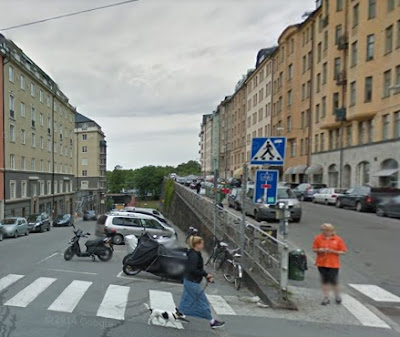 But what is this at the end of the rainbow railings? 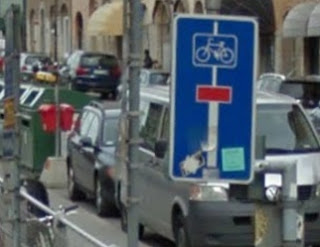 It is a ramp down, a no through road, BUT it leads to a cycle track. And, at the end of the ramped road ... 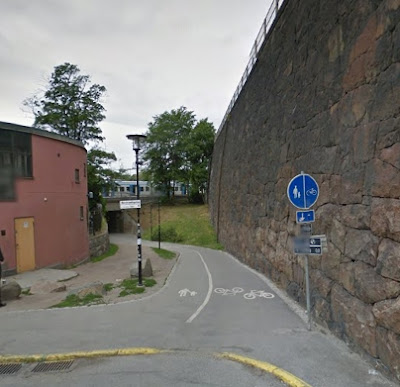 ... a footpath and cycleway that looks like it might take you under the railway. It comes out here ... 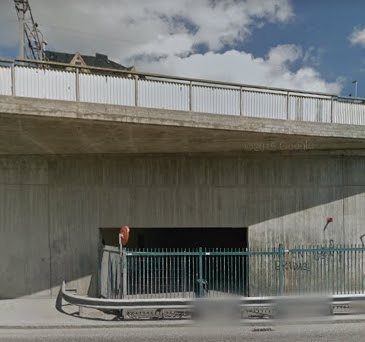 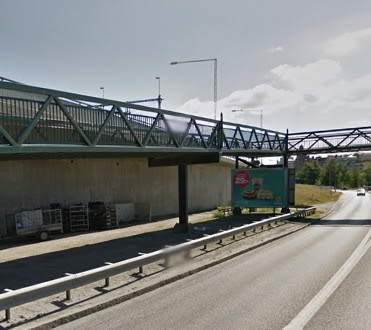 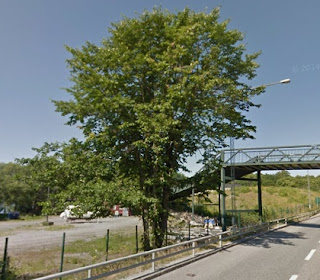 ... and you are at the Karlberg Palace. 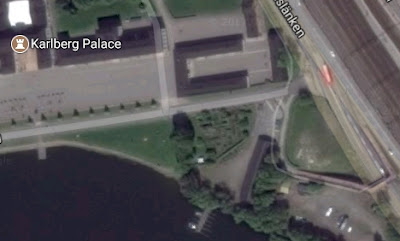 Or perhaps a route via the Stadshagen Metro or bus 59 and the entrance via the barriered roadway (as pictured above) might be easier? 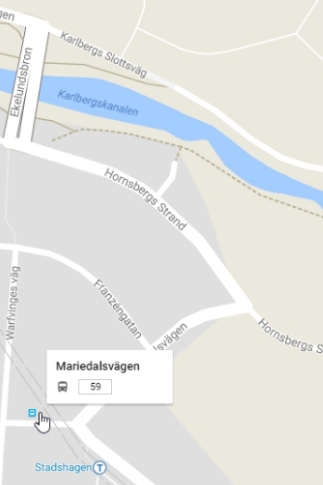 But, hang on a sec, what is this that we espy from the aerial view of the railway in the vicinity of the terrifying tunnel trajectory? 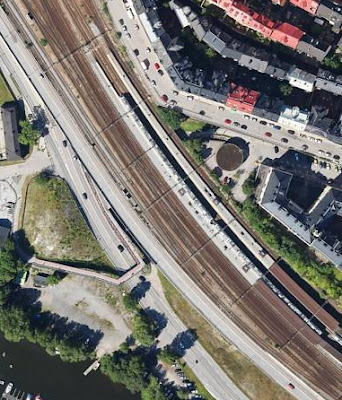 It is a railway station. Can we, therefore, get to Karlberg (suburb or palace) by train?

We will explore further tomorrow.

Next Karlberg blog : Friday 6th October
Posted by fatbusbloke at 02:00