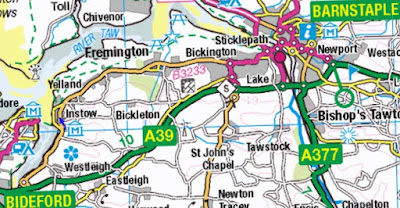 There it is, centre left on the "old road" between Barnstaple and Bideford. Residence is in a very posh pad (i.e. expensive) ordered by No 1 son via Airbnb.

Shortly after moving to San Francisco in October 2007, roommates and former schoolmates Brian Chesky and Joe Gebbia could not afford the rent for their loft apartment. Chesky and Gebbia came up with the idea of putting an air mattress in their living room and turning it into a bed and breakfast. The goal at first was just "to make a few bucks".

It grew from there.

In March 2009, the name of the company was changed to Airbnb.com, and the site's content had expanded from air beds and shared spaces to a variety of properties including entire homes and apartments, private rooms, castles, boats, manors, tree houses, tipis, (teepees?) igloos, private islands and other properties.

The company takes a cut from the price charged by the property owner.

The pad is built on (in?) sand dunes, so the upstairs is downstairs and vice versa. 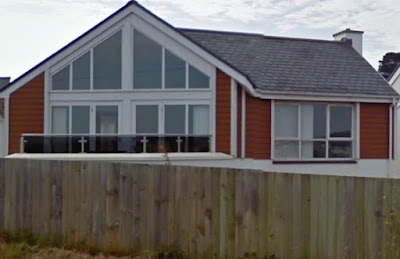 From the balcony, there are views across the Torridge estuary towards Appledore.

If the estuarial nomenclature seems familiar to bus watchers, it may be because of the coach company "Taw and Torridge". 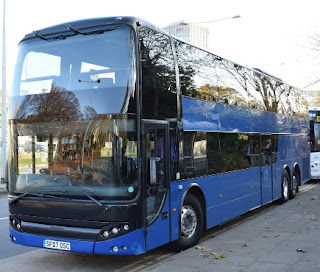 Taw and Torridge Coaches is a family run business and was established in 1976. We are one of the leading operators serving the whole of the South West. We are extremely proud of our good reputation and pride ourselves in delivering a high quality service. We cater for all of your requirements and all group sizes, large or small. We operate a modern fleet of over 75 Executive Coaches and MPV’s, with passenger capacity from 8 to 83 seats.

Business is in coach hire, some school contracts and holidays under the Swan Tours brand.

But in the Instow picture above is a bus shelter.

Passing the village is a bus service. 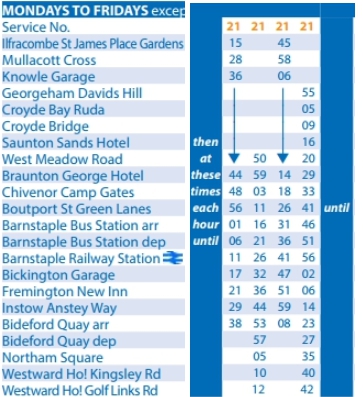 The 21 provides a 15 minute frequency with extensions from Ilfracombe and Georgeham and beyond Bideford to Westward Ho! (The only community in the UK to be spelled with an exclamation mark.)

After standing on the balcony for 30 minutes in the rain, with the aim of taking pictures of flocks if 21s whizzing past, it slowly dawned on the chubby one that he had got it wrong. 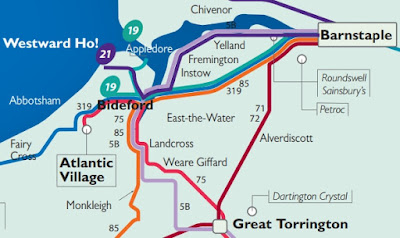 The map doesn't tell you that he 21s avoid the sea front (Marine Parade) and use Anstey Way ... 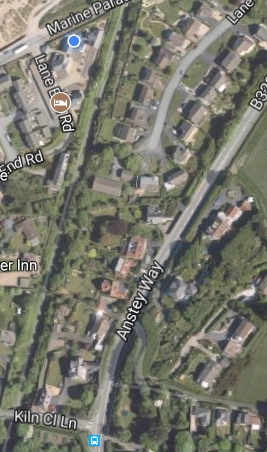 ... leaving him bereft of a frequent bus service. Marine Parade is served by the 5B, running just every two hours to and from Exeter. 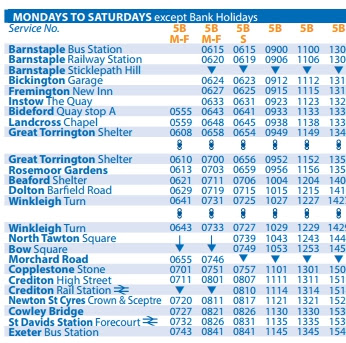 Further attempts to photograph a 5B running past the damp and dismal balcony were thwarted when to 1226 to Barnstaple was running very late, and the 1323 to Exeter passed by during a sumptuous family luncheon. So here is an arbitrary picture of a 5B somewhere else! 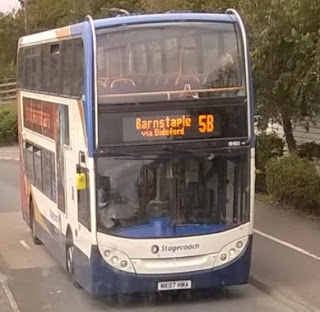 Back in the days of the great Great Britain Bus Timetable, the service past the then-unbuilt property would have been every 15 minutes as Service 1 and 2, timed at Instow Quay and not Anstey Way. 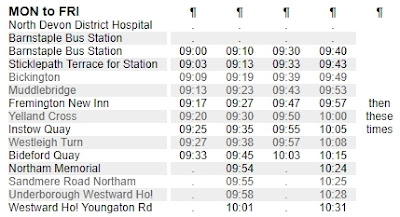 Then, of course, it was in the hands of First Bus. 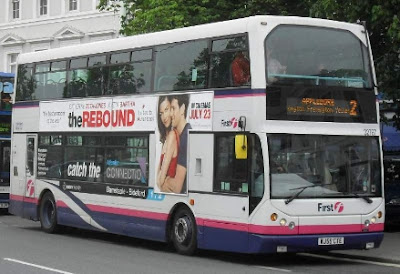 Five years ago First intended to sell the North Devon network to Stagecoach (who had started competitive services), but OFT objected, so First simply rolled over dead and Stagecoach got the business anyway. 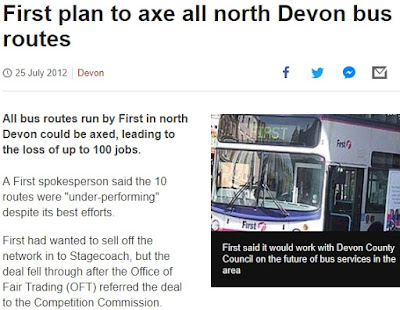 When Stagecoach began their onslaught onto First (already ailing in North Devon) the 21 service was heavily promoted and branded "North Devon Wave". 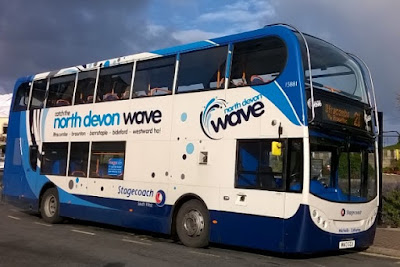 An inadequate survey, whilst out and about yesterday afternoon, suggests the most vehicles are in standard livery and the few remaining "Waves" are looking very forlorn indeed. There is plenty of "Wave" on bus stop flags ... 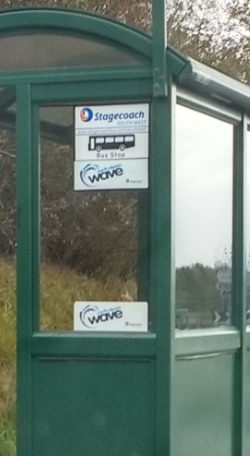 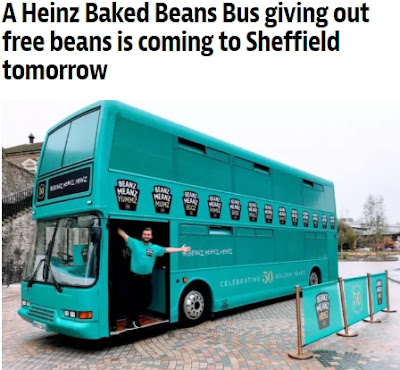 Between 1000 and 1800 today (the advert was published yesterday), the Heinz Beanz Bus will b in Fargate (Sheffield) giving out tasty Beanz Dishez. You can also obtain a peronalized can of beanz. If, depressinly, you cannot make it to Fargate today, you can still buy you canz on-line at https://www.beanzmeanzheinz.co.uk/en/beanz 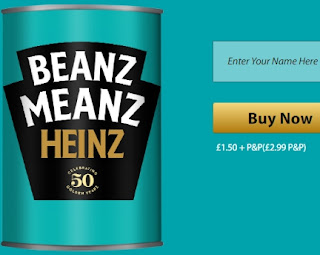 The bus began its live with Nottingham City Transport ... 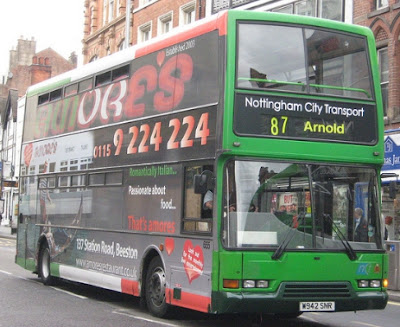 ... and then having a spell in Newcastle. 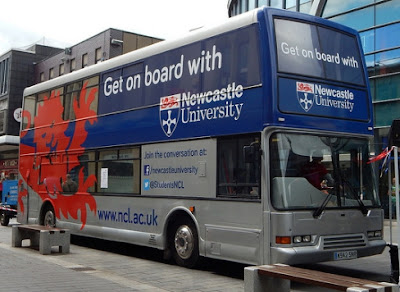 One press article says that the bus will offer you a free "plate" (presumably a very small plate) ...

... of beanz and chorizo, beanz with ham hock and beanz with tomatoes, spinach and feta.

Next Go To Instow blog : Thursday 26th October
Posted by fatbusbloke at 02:00