A Tortuous Trundle To Towcester (1)

Further to my recent correspondence I am now writing to confirm that following further discussion with Northamptonshire County Council it has been agreed that the proposed new service 98 between Brackley-South Towcester-Milton Keynes is numbered service X91.

From Alan in response to the possible delay of bus servie improvement between Towcester and Brackley. See yesterday's blog)

Is the 98 receiving subsidy from N.C.C. as well as a bag of gold from the developer?  If so has the current proposal to withdraw all bus subsidy from 1st April 2018 put a fly in the ointment / cat among the pigeons / caused delay or worse? I don't know.

From Stagecoach boss at Oxford 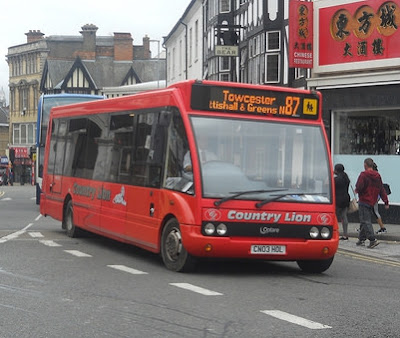 The news that Northamptonshire council is seeking to cut its budget dramatically by reducing everything it can (and some things it definitely shouldn't) will ring danger bells for tendered bus routes. For a dedicated bus-watcher like fbb, these services are much more interesting than the frequent well publicised main road routes.

One such is service 87 which takes the "back lanes" route between Northampton and Towcester. 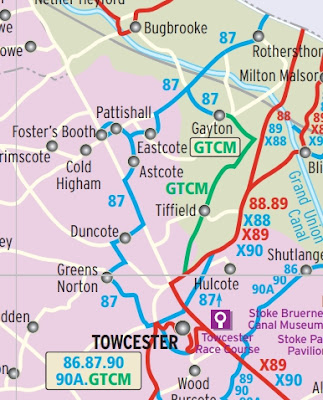 Once served in part by the local independent Basford of Greens Norton ... 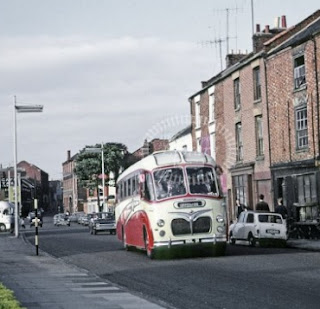 ... the modern tendered version was run by Stagecoach who lost out to long-standing Northampton firm, Country Lion. 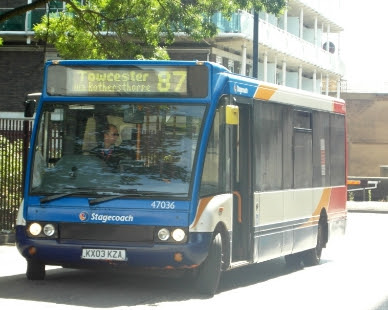 Back in the days of fbb's long lost youth, buses would leave town via the Towcester Road ... 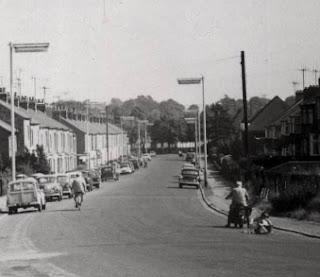 ... go over the railway that carried your blogger south to London town and then find itself in open country. The bridge is still there ... 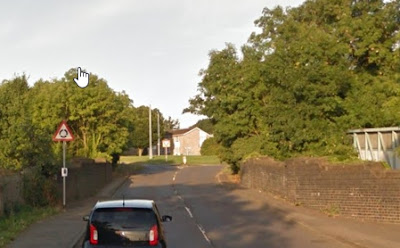 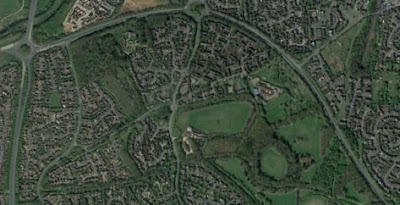 Draw a mental line from top right (railway over-bridge) to bottom left (footbridge under main road) and that is where Rothersthope Road was.

The under-bridge is roughly on the site of the level crossing on the Northampton to Blisworth branch line ... 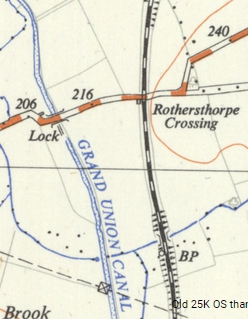 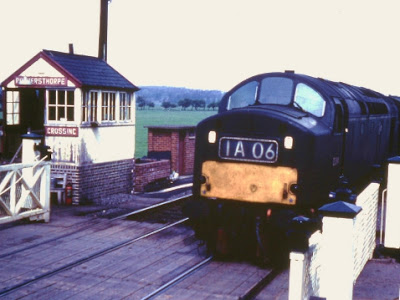 The path under Upton Way is much less interesting! 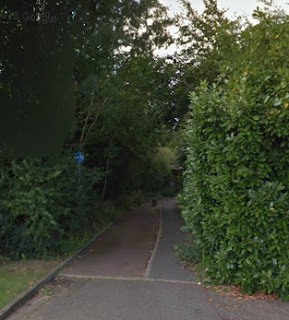 The old road, now called Banbury Lane, is rejoined on the other side of this footway and takes its rural traffic through, but separated from, the Swan Valley industrial area ... 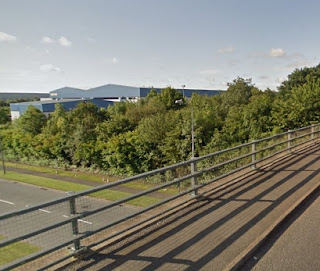 ... then over the M1 where we can glimpse the Services area. 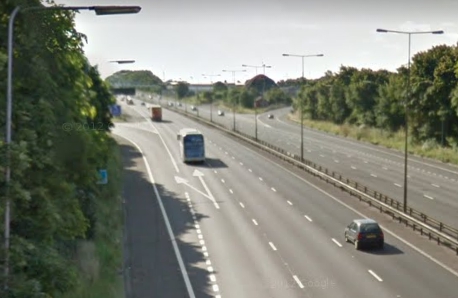 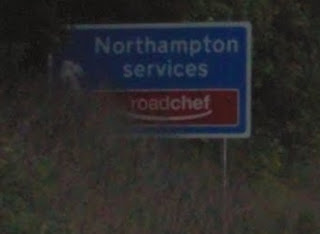 ... it used to be named after the nearby village. 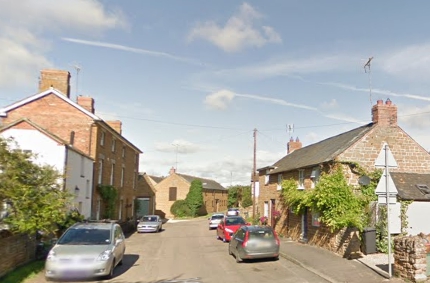 Rothersthorpe does remain a village despite the proximity of Swan Valley just across the M1. It is also home to a magnificent stairway of locks on the Northampton Arm of the Grand Union Canal. 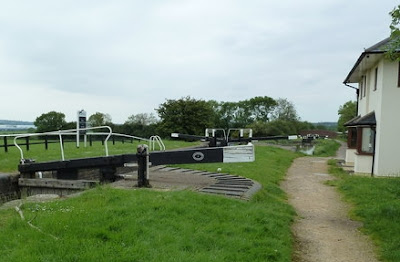 There are 17 in all! Ironically the lock ladder lies next to the new A43 and passes under the M1 Junction - the oldest bulk transport system next to the newest. 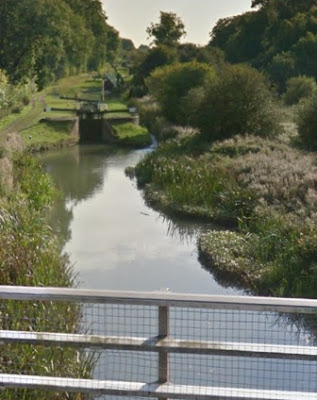 After Rothersthorpe, we come to picturesque Pattishall, a delightful village, relatively unspoilt in the area round the church. 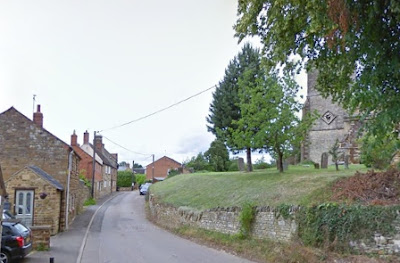 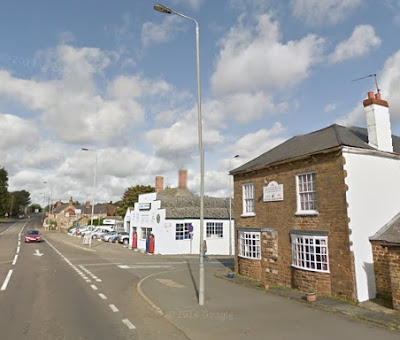 ... where the restaurant (here on the right) was once the "booth" where the Forresters would take their refreshment from the rigours of slaughtering small furry animals and podgy game birds. In ancient times a "forest" was a hunting ground, not necessarily with added trees (hence New Forest in Hampshire).

We have exuded nostalgia over two railway crossings, the extant electrified line via Northampton and the very defunct branch from the town to Blisworth. One piece of the Blizzy branch's infrastructure remains. The bridge which carried the line under the M1 is still there in all its glory. 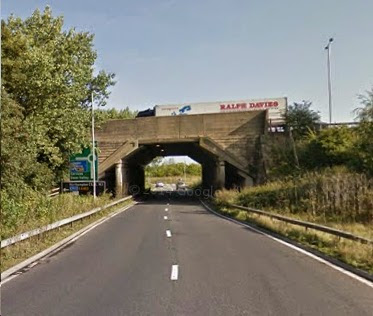 It is now used for part of the complex intersection at the A43/M1 junction which also gives access to Rothersthorpe Services. 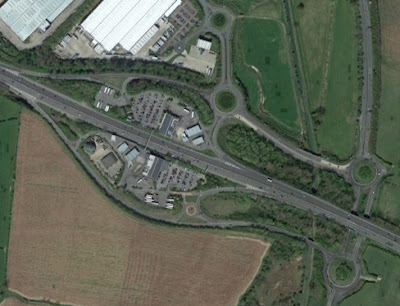 But there is one railway line's intersection that we have, so far overlooked.

Tomorrow it will be revealed - plus sheep!