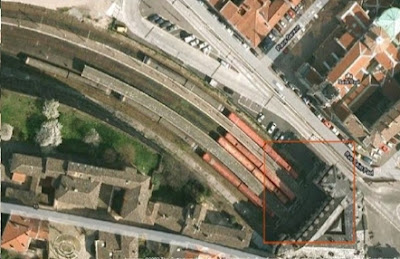 Lyon, Gare St Paul from above. This shot from the recent past shows the four platform station (once six) with two-car diesels awaiting their passengers. Above it is the large turning terminus loop for the mega trolleybi on route C3.  These units ... 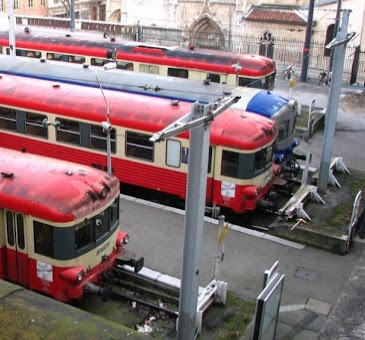 ... formed the mainstay of the service for Xmany years. But the routes were "tired" and something had to be done to rejuvenate the services and attract more customers. Full electrification would have been too expensive, so the decision was taken to introduce trams

And a posh 28 page brochure to publicise the change. The aim was to create three services operating from Lyon St Paul to Brignais, Sain Bel and Lozanne. 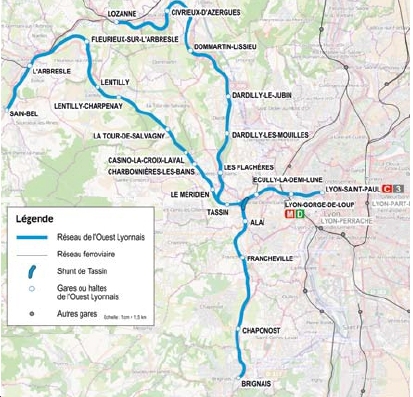 The publicity waxed lyrical about the concept of tram-train but ... ... although the stock is palpably tram (Citadis Dualis from Alstom), there is no inter-running with Lyon's tram network. These are most definitely trains that happen to be in the form of trams. To reinforce this concept, you have to buy a train ticket from a ticket office at the few staffed stations or a self-service machine. 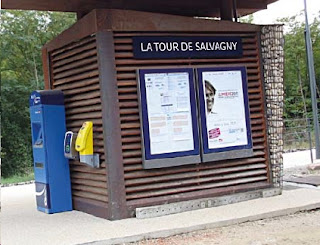 And the tickets are indubitably train tickets. 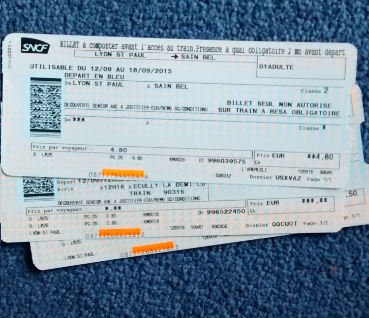 You must "composter" your ticket (validate) before boarding ...

... and, ludicrously, you are directed to "train A" for which reservations are ...

... "obligatoire". Lorry driving David, who rode all three lines when "weekended"** made no rweservations because he couldn't - it was a tram - but took lots of photos for fbb.

The Brignais terminus (bottom centre on the map above) ... ... has a splendidly restored but largl;y unused station building; note the ticket machine under the roof to the left. The empty car park (it was the weeked!) was shiny and new. 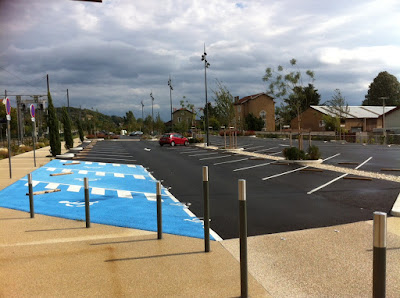 This level of refurbishment was typical of all the stations on the network. Here is Sain Bel (map upper left) ... ... where the line continues for freight only to serve that huge quarry mentioned yesterday. 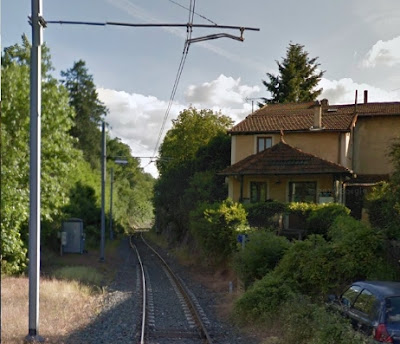 And, yes; the electric string does cease at the third pole along!

At l"Arbresle the tram service connects with "real trains" on the line between Lyon (Perranche and Part-Dieu) and Clermant Ferrand. (click on the map below to enlarge it)

As well as longer distance TER (Regional) trains shown in blue, this "main" line also carriaes InterCity Express trains to places further afield (red line). Hmmm; "InterCity", there's a good name for similar services in the UK; you wonder why no-one has ever thought of it!

Fortunately, correspondent David can use this link to get to the third branch which will take him back from Lozanne to Lyon St Paul; the third branch in this little tram-train-tram network. Look! A decided lack or tram poles and overhead wires greeted our correspondent; and the train emitted a grumbling growling noise. In fact the "tram-train" from Lyon to Lozanne is actually a diesel train from Tassin where it connects with the Sain Bel service.

In fact it is two single cars joined together shuttling back and forth. The on-line articles tell us that the Lozanne line will be tram-trained "in 2015". Boo again. And a possible missed deadline!

At Tassin, we find the depot and works for the trams, about which the launch brochure is equally effusive. 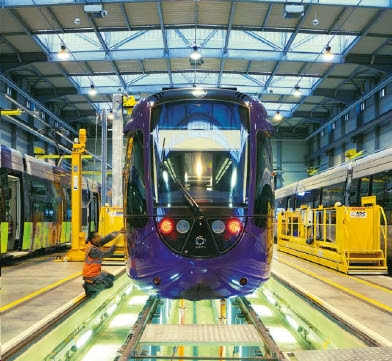 As we continue to muse on whether this service deserves to be called a tram-train (it certainly doesn't between Lozanne and Tassin!) we need to look at timetables and fares. This final blog is provisionally scheduled for Monday of next week.

**weekended. A term used by David (and others in the trade) to describe being stuck in France (etc.) for Saturday and Sunday. Because of drivers' hours regulations, you are required to have a two day weekend off every fortnight. So if your schedule is awry you are stuffed as David was at L'Arbresle for a wet Saturday and Sunday. 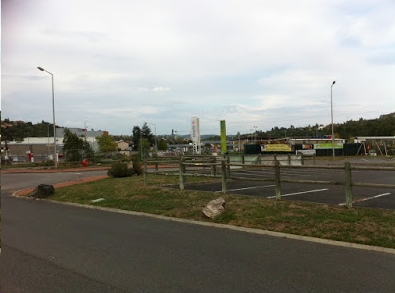 As well as enjoying the not-tram-train, he could misunderstand the 142 bus timetable ... 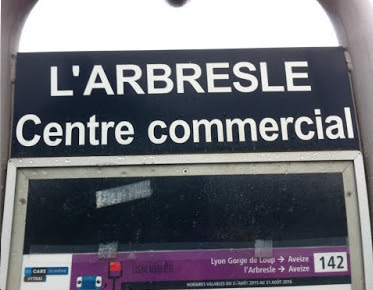 ... and thus miss a Sunday ride on that - of which more next week.

But David's distress is our advantage as he could rin the mini-network and brief fbb on what was happening.