What You Learn about Crewkerne [1]

It is a station on the former London and South Western Railway's main line between London Waterloo and Exeter. 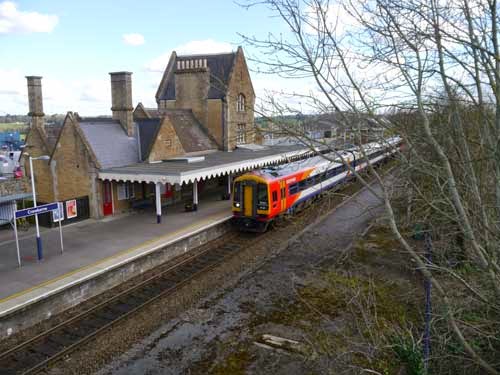 Of course, it isn't at Crewkerne. The station is in the village of Misterton ... 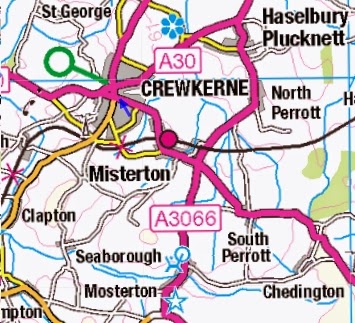 ... not to be confused with Mosterton! Once, very obviously, it was a main line steam railway station with many staff ... 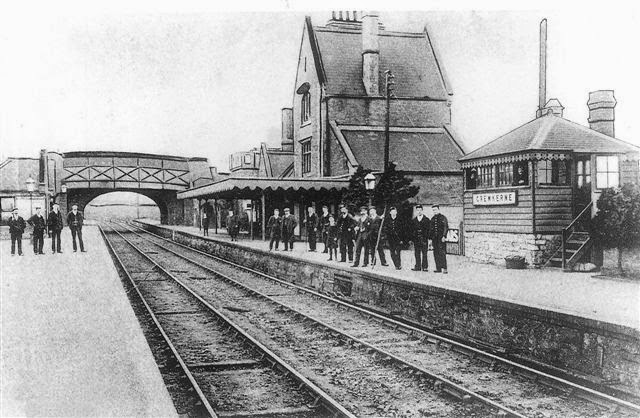 ... as here in 1909. Realistically the buildings haven't changed much; a new signalbox was built in 1960 and is itself now disused. The down platform (left) is also no longer in use and trackless but fbb cannot resist enclosing a picture of the good old days when steam was king ... 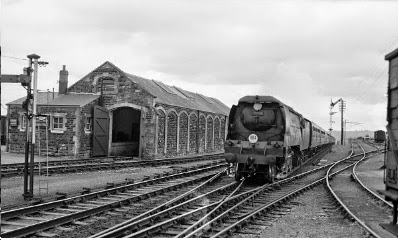 In 2014 the station has a superb service of hourly trains to Waterloo and Exeter seven days a week. Although not as fast as the fast expresses of yore, the service is very reliable and. overall, better than in the good old days.

But a short bus ride to the north is the real Crewkerne, once a weaving town, but now a simple market town with a variety of more modern employment. But fbb bets his collection of Great Britain Bus Timetables that you didn't know hat this little town was home one the very last remnants of the UKs homepgrown motor car building industry. 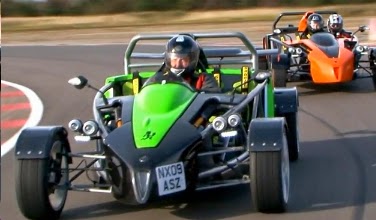 Even Jeremy Clarkson likes it!

... and will cost you in the region of £38,000. But if you fancy something cheaper, the company has just started production of the Ace ... 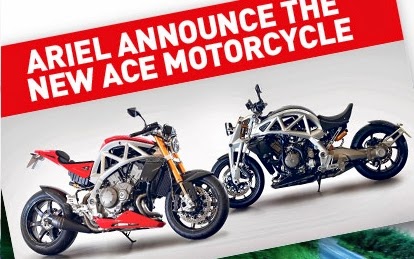 ... two wheels for a modest £20,000. fbb can't wait to open his prezzy on 25th, having left pictures of the Atom and Ace in places where Mrs fbb might find them. Perhaps not, eh? The minimalistic factory is just north of the town on Yeovil Road ... 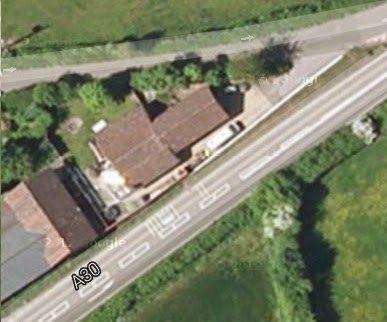 ... and produces just two vehicles a week on average. But if Clarkson likes it, it must be good, even if less than ideal for the UK's notoriously changeable weather. Is there a bracket upon which to stow a strengthened open brolly?

But it is to public transport that we now must turn. And turn back the clock to the Great Britain Bus Timetable of 1999 and look at services as they were 15 years ago.

The first thing we notice is that Crewkerne had buses on Sundays! Faced with the limitations of privatisation, Somerser Council set up a county-wide tenderred routes linking all significant communities. Thus Crewkerne ... 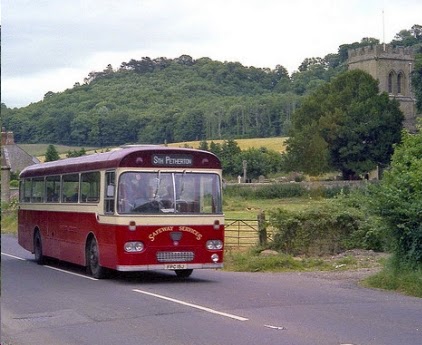 Other services were more diffuse. Safeway 681 and 682 offered routes via Montacute and Haslebury Plucknett; ... 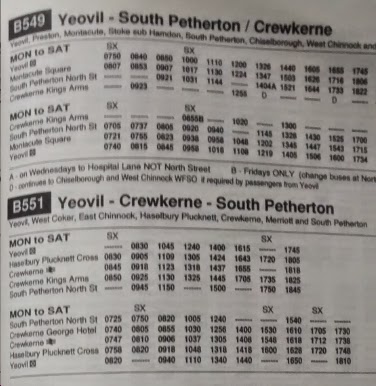 ... their network was extensive and typically illogical. 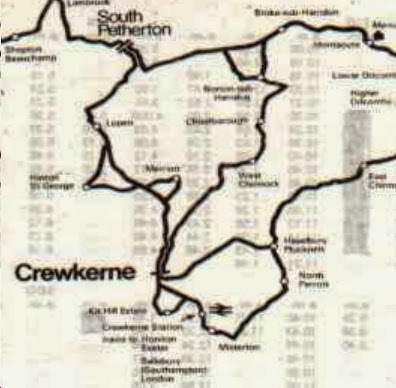 First (Southen National) added to the mix with a route 61 via West Coker between Yeovil and Chard ... 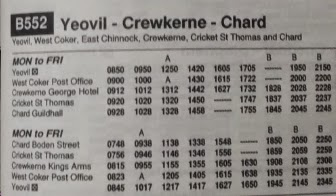 ... which became a bit entangled with their route 47 from Bridport. Finally in this multi-flavoured mix we meet Cooks Coaches running route 685 from Taunton via Buckland St Mary. 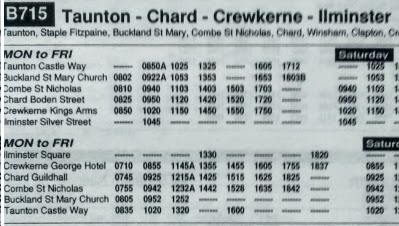 In many ways, today's services via Crewkerne represent a noticeable improvement but, as might be expected, many of the smaller communities are no longer served. Tomorrow we will look at 2014's bus services; contrast and compare.
------------------------------------------
Advent
Calendar
10
words
Decalogue - another juicy and complex word for something we have all heard of, namely the ten commandments; although there might only have been nine, or even eleven! We are familiar with the image. Charlton Heston disappears up a big mountain enveloped in fire, thunder and smoke then staggers back later with two thumping great gravestones. 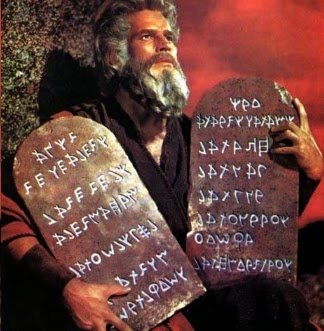 It has never been explained why God (or Moses) should have trimmed the slabs into a neat semi-circle at one end.

In fact, because Hebrew is a strongly inflected language (lots of cases, declensions and tenses), it is a very economical language and the ten commandments really would have been ten words ... 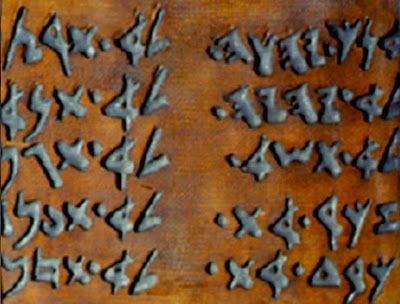 ... fitting very nicely on a couple of shards of Mount Sinai rock. Most commentators would agree that this ancient set of "laws" forms a reliable moral and religious basis even today. Of course it needs a bit more amplification and detailed interpretation; as it did 4000 years ago. But it's a start.

There is a subtlety that many modern readers miss. Instead of reading the Decalogue as a list of "don'ts", a more helpful understanding goes like this ...

Seems a good idea - if only we could keep to it - all the time. 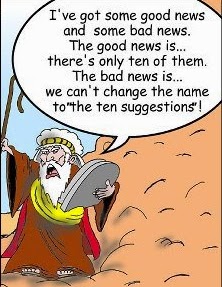 That is why Paul, writing to some chums in Rome only a few years after the death of Jesus, suggested this:-

Everyone has sinned and is far away from God's saving presence. But by the free gift of God's grace all are put right with him through Christ Jesus, who sets them free.

It would seem, then, that the real Christmas is about "setting people free" and is more than turkey, mince pies, tinsel, indigestion and the Dr Who Christmas  Special.